Is it possible to be a tourist in your own home? The 52 Places Traveler gives it a shot. 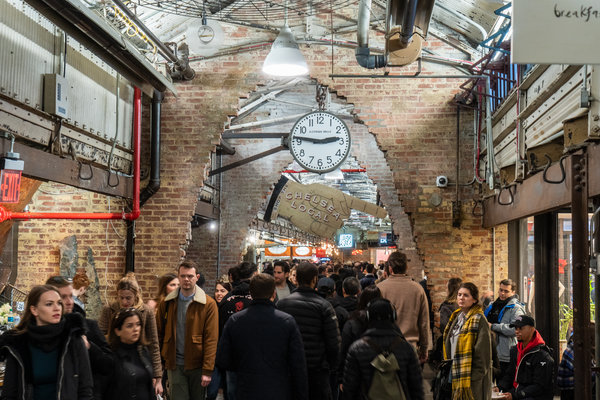 Our columnist, Sebastian Modak, is visiting each destination on our 52 Places to Go in 2019 list. He arrived in New York City from Williamsburg, Va., where the complexities of American history are on full display.

Give yourself more than eight hours to walk the length of Manhattan. I learned this on a recent crisp Sunday when my partner, Maggie, and I set off on a hike from Battery Park on Manhattan’s southern tip, with the goal of reaching Fort Tryon Park, about 12 miles away, by sunset. I’d write about the walk, I thought, and take some photos along the way that showed all the different New Yorks that exist within just one of the city’s five boroughs.

A little stunty? Sure. But the inclusion of New York City, a place where I’ve lived for five years, on the 52 Places to Go list posed a number of challenges. For starters, there was the timing. New York was my last stop in the United States for a while, before I headed off to the Middle East and beyond, and unfortunately I would have to miss some of the events that put New York City on the list — namely, World Pride, coinciding with the 50th anniversary of the Stonewall uprising. But I knew the biggest struggle would be balancing recovery — I’ve been averaging five hours of sleep a night on this trip — with reconnaissance. A hike across Manhattan felt like one way to neatly package a narrative (even if “Broad City” did it first) while doing something I’ve always thought of doing, but never made time for.

Having grown up on the move, feeling like a visitor is, for me, status quo, even in my current home. Still, approaching the city you live in as a tourist allows you to see the place in a new light — and I don’t mean finally making it to the American Museum of Natural History or Katz’s Deli. I mean the little things: How, when the sun is high, the shadow that consumes Trinity Church is the perfect respite for eyes strained by the glare of the Financial District’s office towers right behind it. Or how the food cart proprietors, fishing for hungry customers, often tie a single pretzel from their yellow-and-blue Sabrett signs.

Spending more than a few minutes in Washington Square Park, or even Union Square, can reveal only-in-New York moments, like watching two passers-by step into a bucket drummer’s busking session and spend the next 30 minutes freestyle rap-battling, or seeing a man with a snow-white beard on a lawn chair, holding an oversize sheet of aluminum foil to maximize a tan — in March.

After two solid months of traveling, in which I was constantly soaking in every detail around me, I found myself hyperaware of changes in New York. Why, for instance, had the arcade machine at my favorite bar, the divey Sophie’s in Alphabet City, been swapped out? How dare they make such a momentous decision in my absence?

Nowhere was change more shocking than at Hudson Yards, the long-planned $25 billion development on Manhattan’s West Side that was seemingly conjured out of the ground in the months I’d been gone. I arrived in time for the opening of the Shops, the development’s ritzy indoor mall. The event was bizarre, and not just because I had come straight from Colonial Williamsburg. Servers passed out flutes of Champagne to the overdressed crowd while taiko drummers in branded happi coats put on a show in front of Uniqlo. Break dancers took over one elevated hallway and lines formed to enter Snark Park, the immersive art space that was promoting a collaboration with a “cereal-infused ice cream” brand, as one of the employees told me. I didn’t inquire further.

I needed another chance to see Hudson Yards for it to make sense. So I returned during my walk through Manhattan. The High Line, the elevated park that winds past the midsections of Chelsea’s luxury apartment buildings, was even more packed than usual, given its new role as a conduit into Hudson Yards. A small courtyard separates the mall from the development’s centerpiece, a sculpture for now known as “Vessel,” a $200 million gleaming stairway to nowhere that you need a free, but timed, ticket to climb. Entering the mall felt like a respite, if only for a second, from the selfie-stick-waving hordes in front of the installation.

“I’m from New Jersey so I know shopping malls,” Maggie said, as we tried to keep track of each other in a crowd pressed onward, like automatons, by the blaring techno music. “I’d say this is definitely one of the clubbier ones I’ve been to.”

My parents live in Dubai and the only way I’ve learned to like that superlative-obsessed, chrome-and-glass city is by gravitating toward the polyglot migrant communities that built the city, and the scant traces of the pearl-diving beginnings that haven’t been swallowed up by the drive to build, build, build. To me, Hudson Yards is New York City trying to be the Dubai I’ve always avoided. It’s a vision of the future seven years ago, when ground was broken, that already felt outdated on opening day.

If there’s a silver lining, it’s that Hudson Yards made me feel more like a tourist in my own city. Getting back on the Hudson River Greenway was a relief, and entering Central Park made me ecstatic. By the time the sun started setting, we had only reached Harlem, conveniently where our apartment is. Strolling through Hamilton Heights, where dusk looks like light streaming through a million coffee filters, I took comfort in the familiarity of it all. We called it a day over subtly spiced stews at Tsion Cafe, a neighborhood favorite.

What I packed, what I left behind

I can already hear the seasoned travelers scoffing at how late to the game I am, but Holy Merino wool! On the first leg of my trip, I had brought a couple of shirts and socks made out of the miracle wool to try it out on the road. But I took the opportunity of being back to stock up on the stuff at REI. Merino wool really does keeps you warm when it’s cold out and cools you down when it’s hot. Best of all, the wool has anti-bacterial properties that keep your clothes smelling fresh.

Knowing the ice caves of Ontario were on my itinerary I had packed serious performance gear, including snow boots that took up a third of my suitcase. Those were left behind this time, not just because I won’t be dealing with such harsh weather, but because I’ve realized it’s not worth bringing anything that I’m only going to use once or twice.

When traveling alone, your cellphone can become a lifeline. There’s no such thing as too many portable power banks. I’m now traveling with three. I may not have been organized enough to keep two fully charged, but I think I’ll have better luck with three semi-charged.

The impressions that stayed with me as I packed up to leave again weren’t about Hudson Yards or anything new. I was just happy that some of my favorite meals — the anesthetizing bowls of Sichuan-spiced meats and vegetables at Málà Project; the bang-for-your-buck pan-Indian fare at the West Village’s Mint Masala; the perfect whole fish at one of Harlem’s West African outposts, La Savane — were still good. I was relieved that my cat climbed into my lap, for the second time ever, soon after I sat down on the evening I arrived. And then did so a third, fourth, fifth and sixth time over the next two weeks. I found myself looking for reasons to stay in my apartment, or at least in my neighborhood. I had to rest up, organize my files, catch up with expenses, call my mom. With the exception of a quick trip to the Bronx for lunch, I didn’t leave the island of Manhattan — a travesty for a tourist, as any New Yorker would assert.

It had been less than two months since I had left New York for the 52 Places adventure. In the past I’ve repeatedly found myself away from the city, as a reporter or as a touring musician — it often felt like I was just pretending to live here. This time felt different. All of a sudden, this megacity, one that can be so elusive to so many — even me — felt a whole lot like home.

Sebastian Modak is the 2019 52 Places Traveler. Before being selected to report on the annual New York Times list, he worked at Condé Nast Traveler as an editor and staff writer. @sebmodak