Our columnist, Jada Yuan, is visiting each destination on our 52 Places to Go in 2018 list. This dispatch brings her to Zambia. A Zambian park took the No. 14 spot on the list; the country is the 41st stop on Jada’s itinerary.

Of leopards and aardvarks

Word had begun to spread throughout South Luangwa National Park in east Zambia: A male leopard had killed an aardvark and dragged the carcass up a tree.

My guide, Abraham Banda of Norman Carr Safaris, shook his head when he heard. Aardvarks, he explained, are an incredibly elusive animal. They are nocturnal and spend most of their lives burrowed in the ground. Abraham grew up in a nearby village and has been guiding for 27 years. Just the night before he had been chasing down what would have been the 11th aardvark sighting of his life. “And now,” he said, “I think the leopard is eating my aardvark.”

Our little group on this game drive — me and two delightful retirees from Pennsylvania, Bob and Kay McClenathan — missed seeing the leopard and his kill that night. But the next morning, Abraham still had aardvark on the brain, and suggested we see what had become of the ant-eating animal.

Scanning the area, Abraham and our scout, Viyato Zulu (who wore a black beret and carried a rifle to deal with “situations”), agreed that the leopard was gone. We exited our Land Rover for a 50-yard “walking safari” toward the tree where we thought we’d find the aardvark’s remains.

We’d nearly reached the spot when a dark shape dropped out of a different tree.

The shape was the leopard.

He ran away for a few yards, and then, faster than any of us could have reacted, ran back, stopping maybe 30 feet from where we were, and let out a loud, menacing growl.

“O.K., we’re just going to back up very slowly,” Abraham whispered. None of us breathed again until we were inside the truck.

Abraham explained later that he hadn’t been too worried because leopards usually flee conflict; it was only when the leopard returned and growled that Abraham realized this wasn’t most times. “He had something to protect,” said Abraham.

We’d all forgotten to look for that aardvark.

Camp visitors from the wild

I had arrived two nights earlier at Chinzombo lodge, the fanciest of the luxury safari company Time + Tide’s five camps in the riverine and woodland savanna landscape of South Luangwa.

My 52 Places list had actually featured another Zambian game park, Liuwa Plain National Park, which also has a Time + Tide property, in the far western grasslands of the country. But it wasn’t open yet for the season during the Africa leg of my trip, and would have been difficult to revisit later on, so I chose the closest approximation.

We were ushered in by a young male lion ambling up the road in front of us. He was making a low mewing sound. “He’s lost his mate and he’s looking for her,” Abraham explained.

Chinzombo is near the city of Mfuwe, on a bend in the Luangwa River, which meanders with twists and turns that leave ecologically rich oxbow lakes behind when the river changes course. Animals gather in and around the river year round, including one of the highest densities of hippos on the continent. From our camp and on our twice-daily drives, we’d hear their chorus of grunts, groans and squeaks like a bunch of rusty doors having a conversation.

They weren’t the only animals making their presence known. Several times, I came back from lunch to find elephants near my villa (one of six in the camp). I’d wake up from a nap and see troops of vervet monkeys or baboons using my patio as a thoroughfare.

The capriciousness of nature never ceased to amaze Abraham, which is why he was such a fantastic conduit for this rugged terrain and its inhabitants. “Wow!” he would say, stopping the vehicle and turning off the engine so we could hear birds chirping and warthogs grunting.

I also spent a day at Nsolo, one of Norman Carr Safaris' four South Luangwa bush camps, where I went on a walking safari, a fascinating journey into animal-world forensics, analyzing plants, insects and droppings to guess what had happened the night before.

As for that lion, we followed his soap-opera drama. He reunited with his mate one day, and by evening she was wandering off without him. “He has no use for her right now,” Abraham said, explaining that they’d eaten and it wasn’t mating season. Still, the next night we heard him mewing for her again. 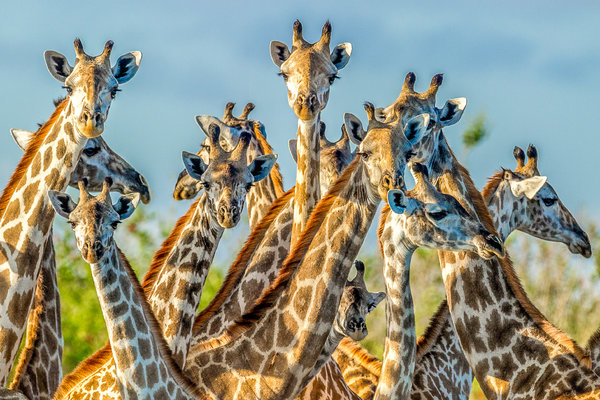 Our Land Rover stopped on a cliff at the edge of the park just as a procession of some 30 elephants was making its nightly river crossing. Through binoculars, we watched their hesitant march. Bulls with their great tusks forged ahead, making sure the coast was clear of predators, and moms paused every few minutes to give their calves time to catch up. There must have been seven families of majestic mammals forming a line of tiny shapes in the distance, silhouetted against the setting sun.

This was Abraham’s secret spot for a safari tradition known as a sundowner: a happy hour of double-strength gin and tonics served in crystal glasses from the hood of our vehicle. It was that rare moment when we could get out of the vehicle — after Viyato had made his safety inspection — in a particularly picturesque spot.

On the way to Chinzombo lodge, we had passed through Mfuwe, which is really a 20-mile series of connected villages that stretches from the airport to the park’s border. The villagers grow mangoes, and it turns out those adorable elephants we’d been watching have developed a taste for them. They were heading across the river to conduct a fruit robbery.

“Elephants are a bit of a nuisance,” Abraham said. “They come every night and all you can do is yell your lungs out and chase them away. It can be dangerous. If cornered, they trample people or gore you with their tusks.” Elephants are also responsible for the worst deforestation I saw in the park; they can eat a patch of trees down to the stumps.

While we stood outside, sipping our drinks, we heard a rustling from some trees nearby. And there, maybe 50 feet from us, was an elephant. And then another appeared. And another. Soon there were half a dozen.

Abraham instructed us to drop our voices to a whisper. All they wanted was to cross the river and get some mangoes. They would do us no harm, as long as we didn’t startle them.

The elephants sized up the situation, and then they went for it, passing right past the vehicle, and filing, one by one, down what looked like a sheer sandy cliff. Soon they were racing across the riverbed and through the water to join their companions in the mango groves.

I was thrilled, a little scared, and in utter awe that I was living that moment. It was light enough to see them, but just dark enough that taking pictures wasn’t an option. All I have are the memories, and I will have those forever.

22 and 23: Bristol, England, and Glasgow, Scotland

24 and 25: Tallinn, Estonia, and Vilnius, Lithuania

37 and 38: Emilia-Romagna and Basilicata

Jada Yuan is the 52 Places Traveler. She spent over a decade at New York Magazine and its websites as a contributing editor and culture features writer. Her cover stories and features have appeared in Cosmopolitan, Vogue, Elle, Glamour and Bloomberg Businessweek. @jadabird