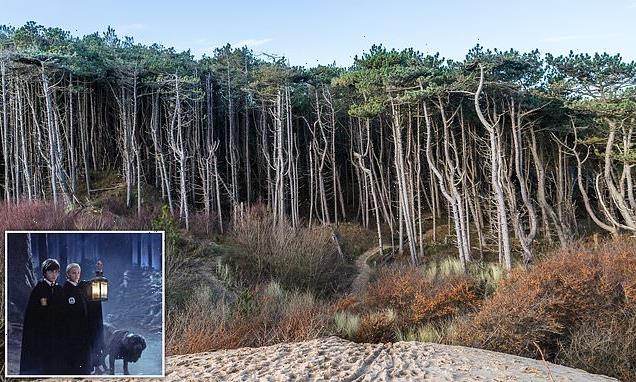 Inside Merseyside’s answer to Harry Potter’s Forbidden Forest: Discovering the natural delights of Formby, with spooky trees, red squirrels and a path that leads to a breathtaking beach

To reach one of Britain’s largest nature reserves you have to trudge through densely packed woodland redolent of the Forbidden Forest in the Harry Potter films.

But as we press on through a cross-stitch of conifers to reach Formby beach on the West Lancashire Coastal Plain, a more vintage piece of cinema comes to mind: those spooky apple trees on the way to Oz, which grumble with spite when Dorothy tries to pluck the overhanging fruit.

Either way, it’s worth the cinematic journey. For when we emerge from the dark, cool forest, the view — and the gusty breeze — is quite breathtaking: 500 sprawling acres of sand dunes and a sweeping coastline. 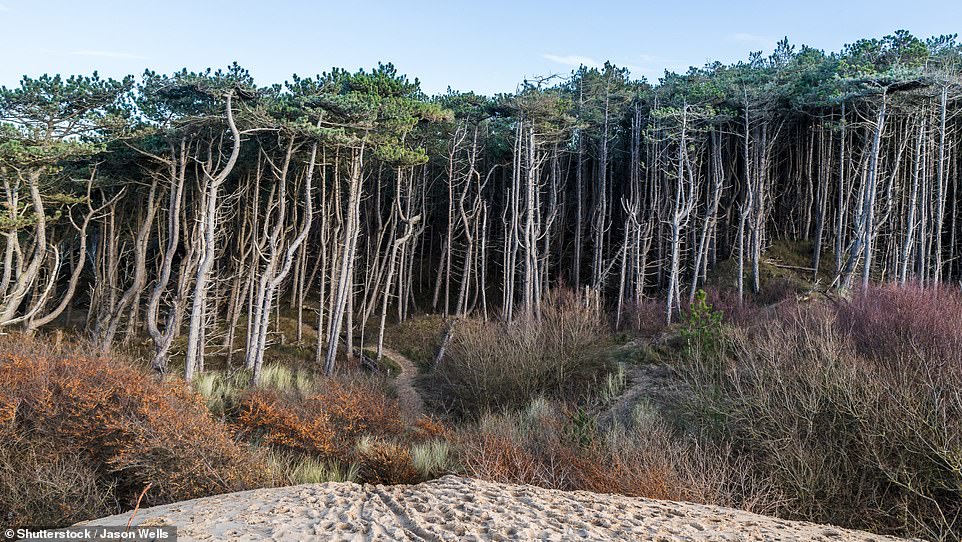 Angela Epstein goes on a ‘cinematic journey’ through the forest at Formby, pictured, a pinewood on the West Lancashire Coastal Plain, and finds that it reminds her of the Forbidden Forest in the Harry Potter films 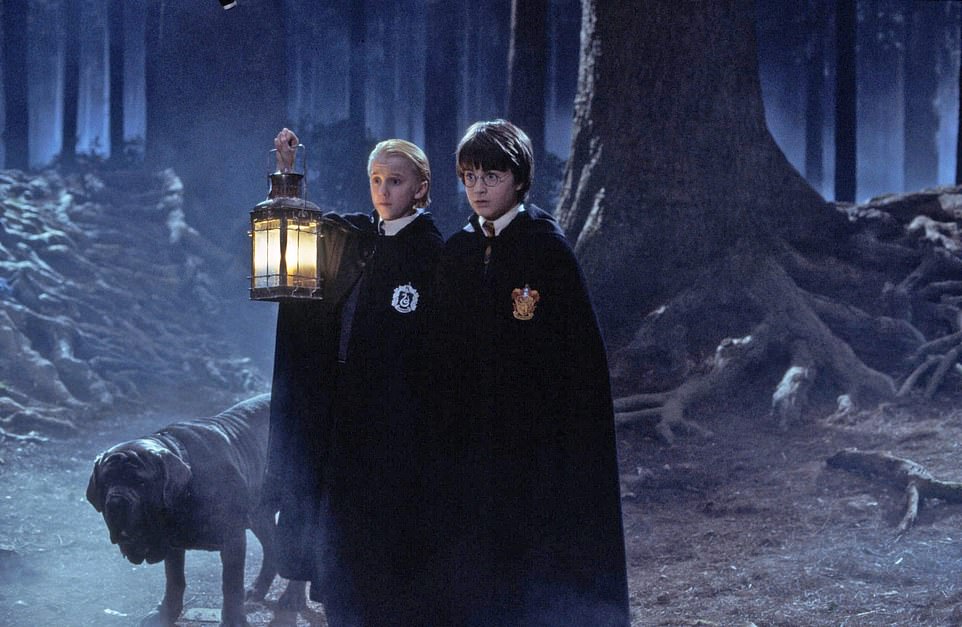 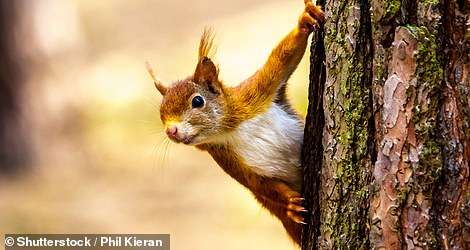 Woodland charm: Protected red squirrels can be spotted in the pinewoods at Formby

Yet despite its raw beauty, it’s only a short drive from Liverpool. Little wonder the upmarket suburbs hemming the reserve — a mix of new-build mansions and Georgian piles — have become a magnet for superstar footballers who play for north-west Premier League clubs. The confected opulence of these areas is in stark contrast to the natural beauty that has drawn us here.

The pinewoods are part of the attraction, since they’re home to red squirrels — almost extinct outside Scotland. Unlike the grey-furred dustbin-botherers, the reds are a protected species.

Legend has it they arrived in 1940, after a resident was asked to look after a Scandinavian breed for a friend. But one day the squirrels escaped, taking up squatters’ rights in the woodland.

The woods themselves — first planted by the Formby family in 1784 — also have something of an apocryphal history: during World War II, German bombers mistook the woodland at night for darkened Liverpool and dropped bombs, causing extensive fires.

The dunes, too, are home to a huge variety of species. Not least the rare natterjack toad, whose signature chorus has earned it the local name of Birkdale Nightingale, and the rare northern dune tiger beetle, which is only found in Merseyside and Cumbria. 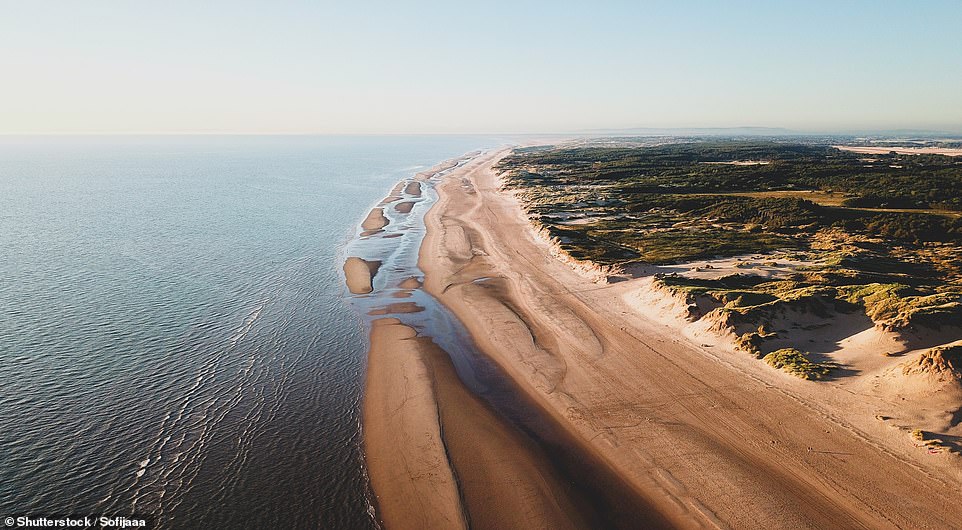 Angela finds that the view of Formby beach, pictured, is ‘quite breathtaking: 500 sprawling acres of sand dunes and a sweeping coastline’ 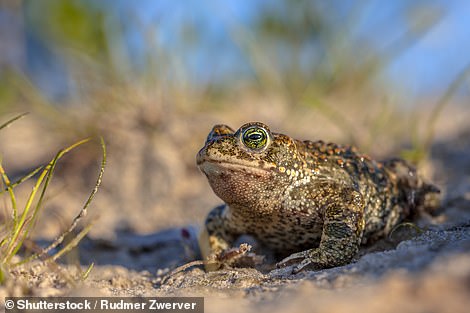 The rare natterjack toad, whose signature chorus has earned it the local name of Birkdale Nightingale, is native to Formby’s sand dunes (stock photo)

This is a place where vegetation sprouts wildly. Asparagus has been grown in Formby’s sand dunes by farmers since the 1800s, with around 200 acres levelled by hand to create the fields. Ten acres of the site are still in use today.

We head off on the walking trail, following a path of around a mile and a half that is suitable for all abilities. You can even stop for a picnic by huge wooden asparagus spears and sculptures of those who farmed in generations gone by.

The nothingness of Formby beach, as well as its microclimate, is part of its charm. Though if you want to see more, venture south along the coast to Crosby beach where you’ll find Another Place, an Antony Gormley art installation comprising 100 cast-iron figures modelled on his own 6 ft 2 in body.

‘Despite its raw beauty, it’s only a short drive from Liverpool (above),’ Angela says of Formby 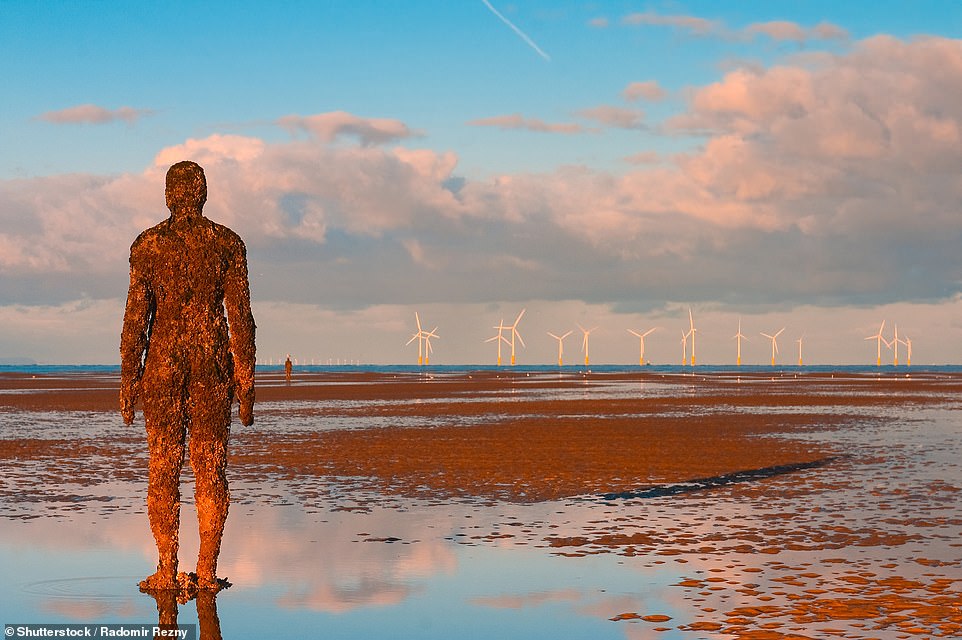 Venture south along the coast to Crosby beach and you’ll find Another Place, an Antony Gormley art installation (pictured) comprising 100 cast-iron figures modelled on his own body

They’re strangely disturbing, staring impassively out to sea. The tide rushes in and they are slowly submerged, only to reappear as the water falls away.

It’s hard to beat the magic of Formby. Standing on the dunes overlooking the Irish Sea, there’s a gauzy outline of the Cumbrian mountains — and even the silhouette of Blackpool Tower.

But if you want to visit, go this summer. Not least because this is one of the fastest eroding coastlines in the UK. What nature gives, it clearly wants to take back.