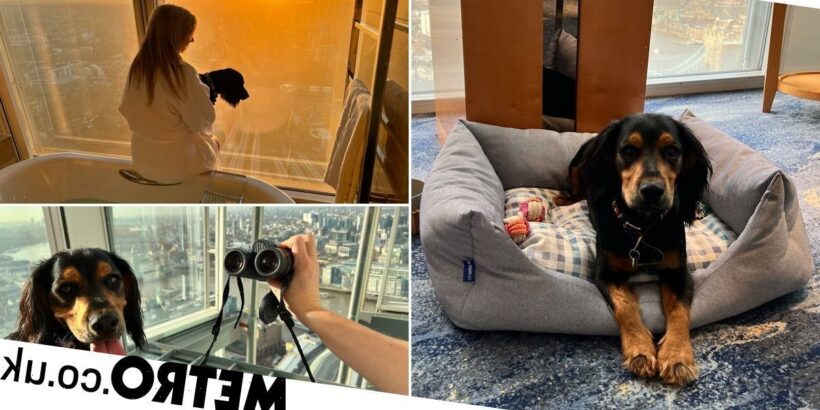 There aren’t many downsides to being a dog parent, but not being able to take your precious pooch everywhere you go is definitely one of them.

Our furry friends are a major factor in our holiday plans, so if we want to bring them along, that usually means having to avoid fancy hotels, which for the most part are about as dog-friendly as a chocolate tart.

That’s no longer the case with the five-star Shangri-La The Shard in London Bridge, which is now offering luxury staycations for dogs for a £75 pupgrade.

Yup, that’s right, dogs can now sleep up in the clouds. What a time to be alive.

We sent Jo, Greg, and Franco the one-year-old Cocker Spaniel for a night in the capital’s highest hotel.

Here’s what they made of their stay…

Jo, Greg, and Franco’s review of the Shangri-La The Shard’s dog-friendly staycation 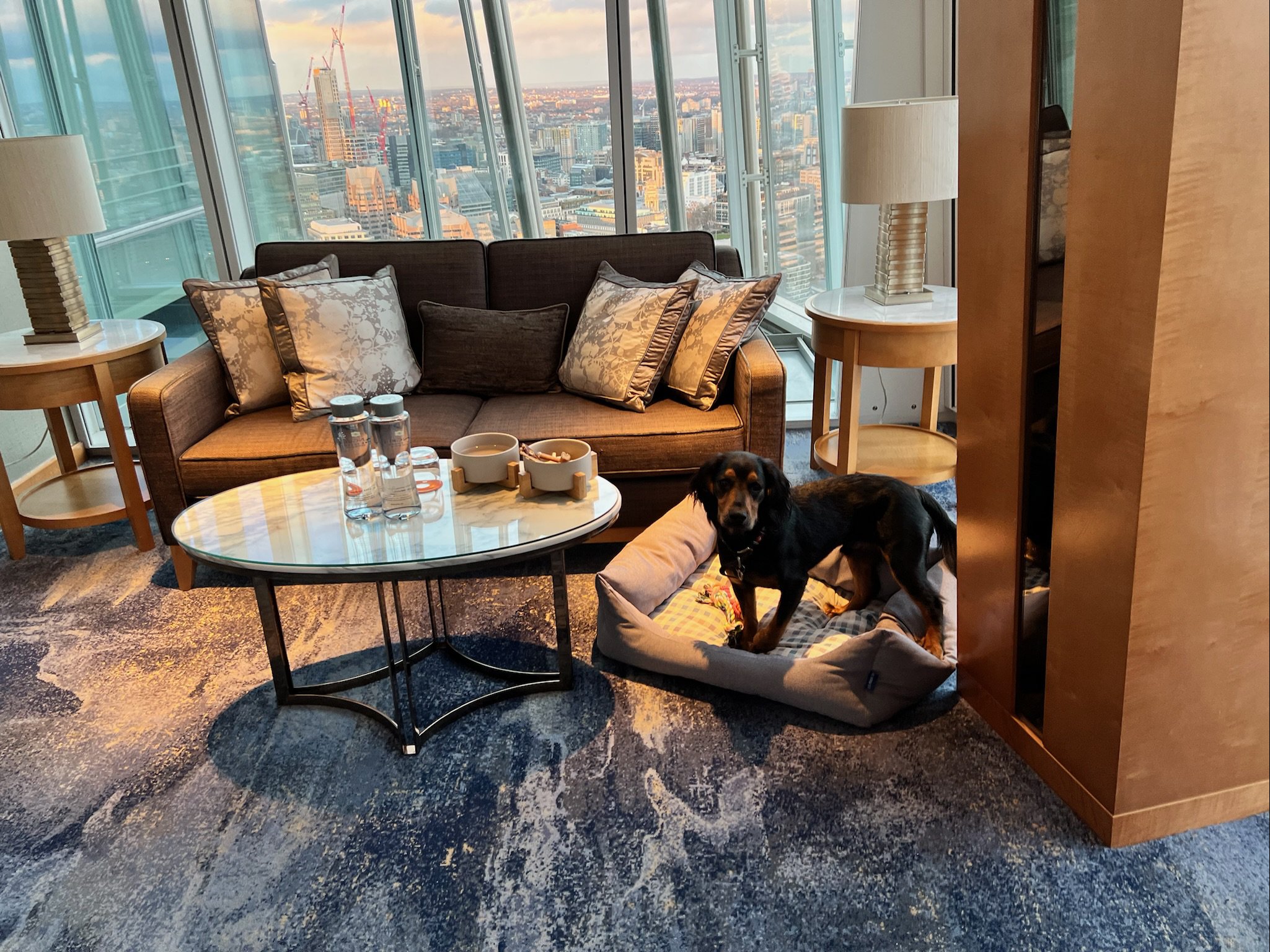 We stayed in a deluxe city view king room on the 39th floor of The Shard (Shangri-La occupies the 34th – 52nd floors of the iconic building).

It was pitch black when we entered the room, but as soon as we inserted the key card the floor-to ceiling window blinds rolled open to reveal incredible views across London. There are even binoculars to use – we live close by and could spot which local dogs were in the park.

The room was super spacious with an amazing king-size bed – Franco even had his own comfy Project Blu dog bed, though he spent a lot of time admiring the view from the sofa and excitedly running across our bed. It felt like he had a lot of space to explore, for a hotel room.

Sitting in the bath, you’ve got views across Tower Bridge, and Franco loved it as much as we did – he jumped in the bath as soon as I ran one, which is weird because he usually hates baths.

There were dog toys waiting in the room for Franco, and dog bowls to use during our stay – one of them was filled with delicious treats, which he devoured. One thing to note, though is that there wasn’t any info about what the treats were, which would have been handy for fussier hounds.

There’s also meant to be a dog room service menu, but there wasn’t one in our room, so we didn’t know what was available – we brought Franco’s own food anyway, and kept it in the mini bar fridge.

A dog-friendly guide to the local area was included, advising on walking routes, places to eat with your dog, grooming parlours, and a local vet contact. As locals, we can confirm they included all the good spots.

After settling in, we head downstairs for a drink at Bar31, which is currently set up like a ski lodge. Dogs aren’t allowed at the other hotel restaurants or leisure facilities (no swim for you, Franco – sorry pal) but they’re allowed here, and even get given extra treats. You get your own ‘lodge’ to sit in, which is useful if your dog isn’t great with other dogs, and there’s plenty of room for pooches to potter around.

Dropping Franco back in the room, we popped down to level 35 for dinner at TING, the hotel’s Chinese restaurant. It felt a bit strange leaving him in the room alone, but we left him one of the tougher treats to keep him occupied and make sure he didn’t cause any chaos.

We’re pretty sure he had a bath while watching Paw Patrol on the TV in the bathroom mirror.

As a vegetarian, I don’t usually opt for Chinese food due to limited choice but there was an entire plant-based menu – I found it really hard to choose, which is a great problem to have as a veggie. We shared some small plates to start (Vietnamese spring rolls, tofu ‘prawn’ toast and Korean cauliflower popcorn) before our mains of prawn and abalone Shanghai noodles with XO sauce, and ‘Buddha’s Delight’ wok-fried vegetables.

‘Going to bed, we didn’t bother shutting the blinds as the view across London at night was unreal to fall asleep to. We were incredibly lucky to have clear skies and great visibility when we woke at sunrise.

‘We left Franco in the room again for breakfast at TING, which was à la carte. I had the plant-based full English (huge) with poached eggs, and Greg had the regular full English. The wait staff were super clued up on different dietary preferences, and offered to add things to my plate when they found out I was veggie, not vegan.

One small issue was that we had to use two lifts to take Franco outside to the loo from our room, which was easy enough, but longer than what he’s used to, so bear this in mind if your dog is used to quickly nipping into your garden.

Unfortunately, Franco did end up doing a little pee on the ground floor near the concierge (sorry!), but the staff were very good about it.

Franco got lots of attention inside the hotel, with another guest exclaiming that they wish they’d known they could bring their dog. Considering the price of the room, £75 is great value to be able to bring your dog along – it was such a novelty to have him there without worrying about leaving him with a sitter.

What you need to know

A dog upgrade at Shangri-La The Shard costs £75 per night. Rates for a deluxe city view king room start at £675/night from March 2022.

Rules for your dog’s stay at Shangri-La The Shard: