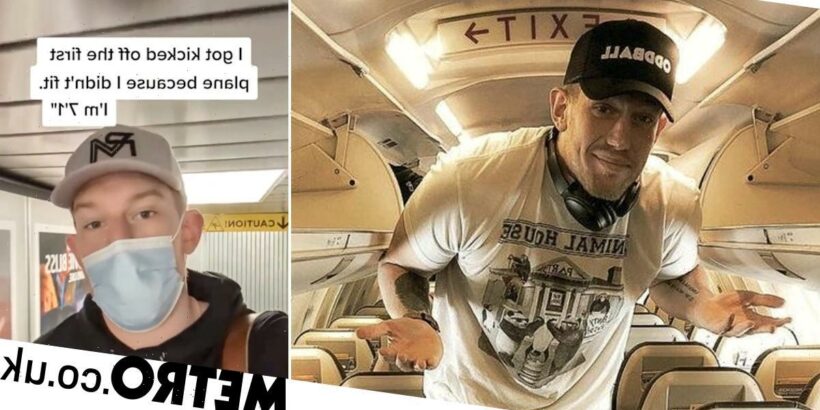 A super tall man had to be upgraded to first class because he couldn’t fit in a standard airplane seat – despite booking on an exit row.

Beau Brown, 29, stands at a whopping 7ft 1ins – which can make some aspects of his life a bit of a challenge.

On a recent short-haul flight to North Carolina from Georgia his size nearly ended his trip before it had even begun.

Beau had specifically booked his seat on an exit row so he would have more room to stretch out his legs. But, when he tried siting down, he quickly realised he was still unable to fit into his seat – and was forced to switch planes.

Beau was originally worried the airline wouldn’t accommodate his size, but instead they bumped him up to first class to apologise.

He shared the humorous story on his TikTok, and the video has since been viewed more than 6 million times. 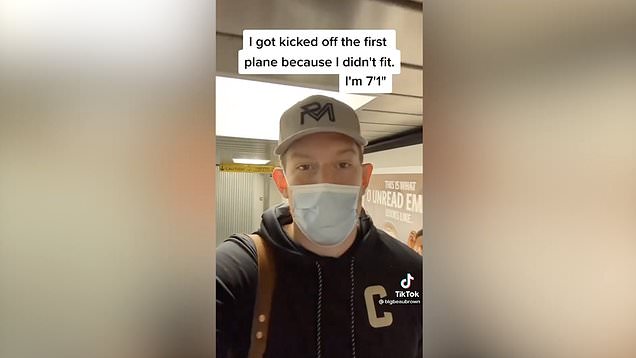 Beau, from Atlanta, Georgia, says: ‘Travelling is always a huge struggle for me and flying can be seriously uncomfortable.

‘My knees touched the seats in front of me, and I was pinned in, unable to sit down or get up.

‘I told the stewardess that I didn’t fit and she was really lovely about it.

‘The airport staff then told me I’d be switching flights, but they’d be bumping me up to first class which was pretty sweet.

‘The flight was only 40 minutes, but it was a very comfortable 40 minutes compared to what would have been plain torture.

‘When I flew to Los Angeles last year they couldn’t upgrade me, and my knees had to be out in the aisle the whole time.

‘My legs were being hit by stewardesses and their carts and people were complaining about me fidgeting and knocking their seats – it was chaos.’

Over the years, Beau has embraced his height and established a wide following on social media where he shares his daily activities.

He has had many videos go viral, including one of him gripping a full size basketball with one hand, and another documenting the struggles that come with staying in hotels.

Beau, who works as a cinematographer, has size 18 feet and needs to have all his shoes and clothes specially made.

He loves chatting with strangers who come up to him in the street asking him questions about his height and posing for photos.

It certainly hasn’t affected his ability to find love, and last month Beau got married to his long term partner Sara, 26, who isn’t so short herself – measuring 6ft 1ins.

He says his height makes him unique and although he gets annoyed with people constantly telling him he should play basketball, he wouldn’t change it for the world.

‘At times it’s frustrating when I end up spending excessive amounts on regular every day items,’ Beau adds.

‘But I love standing out from the crowd and owning my appearance.

‘My family are all big so they know the struggles that come with being tall, and their all super supportive of me.

‘Before I could afford my own place, renting was a nightmare as I’d be constantly ducking all the time because of the low ceilings.

‘Now my condo has specially constructed 12 feet ceilings and lots of space inside so I can fully relax at home in a comfortable environment.

‘My dream is to have a travel show which shows the complications of being 7ft tall around the world – that would be awesome.’