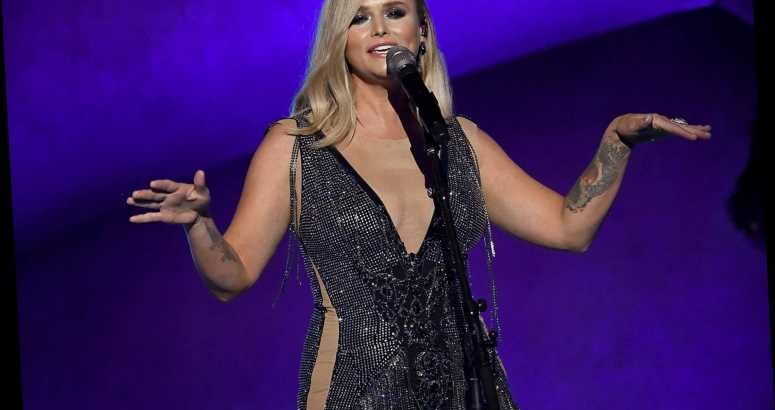 Bringing Nashville to the Grammys!

Miranda Lambert rocked the Grammy Awards stage on Sunday while performing her hit single "Bluebird" from her acclaimed LP Wildcard, which won best country album earlier in the show.

During the pared-down performance, the country star, 37, put her vocal prowess on full display as she dazzled in a sparkly cutout navy blue dress and tights.

"Bluebird" — which was released as Wildcard's second single — was nominated for both best country solo performance and best country song; Vince Gill's "When My Amy Prays" won for the former, while The Highwomen's "Crowded Table" took the prize for the latter.

After accepting the award for best country album, Lambert told reporters that she put her "heart and soul" into Wildcard.

"This record, I needed it in my life at the time that we made it," she said. "It obviously feels amazing to celebrate that. But I love all the people in that category with me, and we're family so I feel like I'm bringing it home for all of us." Ahead of the show, Lambert talked to PeopleTV correspondent Jeremy Parsons about what fans could expect from her performance.

"The set is beautiful, I just got to see in person is so girly and fresh and pretty. My band and I haven't seen each other in a really long time," she said. "Just us being together playing 'Bluebird,' there's a synergy, I guess it's gratitude more than anything." Lambert then spoke about her road trips with husband Brendan McLoughlin and how they got to spend more quality time together because of the pandemic.

"When you travel for a living, sometimes you don't want to travel on your time off, so that was another positive thing about being forced to be off tour. I got to go actually see some things," she said, adding that they listened to crime podcasts while on the road.

"[My husband] really can put up with me," she said with a laugh about what she learned during the pandemic. "That was good news."

"We got married not that long ago and so we were really had a lot of togetherness," she added. "We got to really know each other. It was fun."

Lambert also teased her upcoming album The Marfa Tapes, which she recorded with two of her friends in "the middle of nowhere."

"We wrote like 15 to 20 songs, and I wasn't sure where they would all land. It's all three of us singing them and just [playing] around the campfire," she said. "It's just very acoustic. It feels like you're sitting right there, you can hear the wind and the cows and it's something different."

Of her "hide out" in Marfa, she said it's "just this vortex."

"It's just like everything disappears and you just feel like you can let all the noise go away and hear the songs that you have in you," she said.

Check out PEOPLE's full Grammys coverage to get the latest news on music's biggest night.

Also performing at the Grammys this year are the likes of Bad Bunny, Billie Eilish, BTS, Cardi B, Doja Cat, Dua Lipa, Taylor Swift, Post Malone and Mickey Guyton, among others.

The Grammys, hosted by Trevor Noah, are airing live from Los Angeles on CBS and Paramount+.