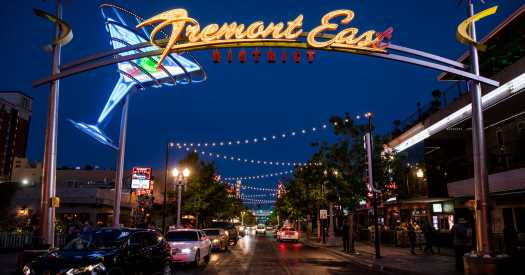 A decade ago, after a rained-out Thanksgiving desert camping trip with our five kids, my wife, Kristin, and I headed to the nearest available lodging, the now-shuttered Hard Rock Casino in Las Vegas. Watching our brood eat their Thanksgiving meal as cigarette smoke and slot-machine clamor wafted over their cheeseburgers, Kristin and I locked eyes with an unspoken message: We ar­­e the world’s worst parents.

We have avoided Las Vegas with the kids since then, but an aborted drive to slushy Aspen this April with three of our heirs caused us to pause in Vegas. At the time, the city was just awakening from its Covid slumber, with mandatory masks and limited capacity in most indoor spaces, traffic so light that cars were drag-racing down the normally packed Strip, and a lingering, troubling question over the whole place: Will this reopening really be safe?

But extraordinary things have been happening during this slumber, and while we were only going to spend one night there, we had so much fun that we ended up staying four. At first we spent most of our time in the relative safety of the outdoors, but then we started to relax along with the rest of the city, drowning our hands beneath the ubiquitous liquid sanitizer dispensers, masking up and heading indoors.

I knew things had shifted in Sin City when, while maneuvering the minivan through some seemingly dicey neighborhood between Downtown and the Strip, I noted on the back alley wall of a hair salon a striking mural depicting the cult outsider artist Henry Darger’s seven Vivian Girl warriors in their trademark yellow dresses. What were the Vivian Girls doing here?

Farther along, Vegas’s ghost-town adult stores, shuttered warehouses and other buildings were also sporting increasingly elaborate murals: a blood-squirting horned lizard spanning half a city block; a dog with an impressively slobbering tongue piloting an open cockpit plane; a colorful phoenix and dragon rising like fireworks from an empty parking lot — all producing collective surprised “Wows!” from inside our minivan.

Las Vegas, it seems, is emerging from the Covid crisis as a place of spectacle and creativity, especially outside the air-conditioned gambling ghettos of the Strip.

Over the next four days we did a lot of walking, crawling, flying and even railroading, all of it away from the casinos. We explored the Arts District, an area that has gone into hyper drive — so much so that we waited 30 minutes to get into my once “secret” Colombian breakfast joint, Makers & Finders — and wandered along Spring Mountain Road, the hub of the city’s Chinatown, rapidly expanding westward. In the midcentury mecca of East Fremont Street, a $350 million investment by the tech titan Tony Hsieh, who died last year, has produced a boulevard of fantastical art installations, restored buildings and a sculptural playground surrounded by stacked shipping containers converted to boutiques and cafes, all guarded by a giant, fire-spewing, steel praying mantis.

“Vegas is going through a cultural renaissance,” a former member of the city’s Arts Commission, Brian “Paco” Alvarez, told me in a recent telephone interview. “A lot of the local culture that comes out of a city with two million unusually creative people didn’t stop during the pandemic.” 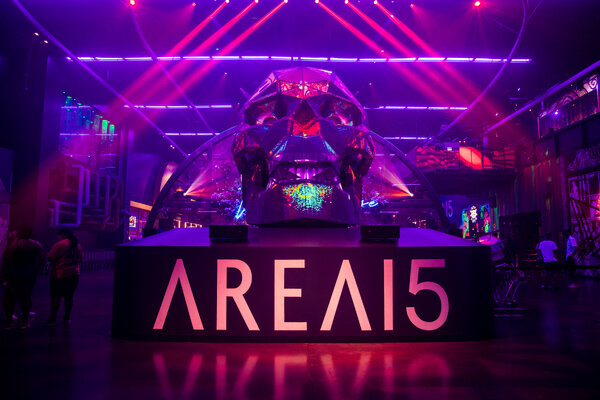 The most striking newcomer is Area15, which opened in February in a mysterious, airport-hanger-size, windowless building two miles west of the Strip. Imagine an urban Burning Man mall (indeed, many of the sculptures and installations came from the annual arts festival held in northern Nevada), with some dozen tenants providing everything from virtual reality trips to nonvirtual ax throwing, accompanied by Day-Glo color schemes, electronic music, giant interactive art installations and guests flying overhead on seats attached to ceiling rails. Face masks are currently only mandatory in Area15 for self-identified unvaccinated people, though some of the attractions within still require face masks for everyone. Everywhere, we encountered the constant presence of cleaning attendants spraying and wiping surfaces.

On the second floor of Area15’s art riot I met an old acquaintance from New York, Chris Wink, one of the co-founders of the joyously weird Blue Man Group, who was bringing his creative magic to Area15 in the form of a “Psychedelic Art House Meets Carnival Funhouse” called Wink World (adult tickets start at $18). Wink World is centered around six rooms with infinity mirror boxes reflecting Slinkys, plasma balls, fan spinners, Hoberman Spheres and ribbons dancing to an ethereal soundtrack of electronic music, rhythmic chanting and heavy breathing.

“I worked on these installations for six years in my living room in New York,” Mr. Wink told me. “I was trying to evoke psychedelic experiences without medicine.”

My unmedicated children were transfixed, as if these familiar toys frolicking into eternity were totems to their own personal nirvanas. I’ve never seen them stand so still in front of an art exhibit.

Omega Mart (adult admissions start at $45, face mask and temperature check mandatory), the biggest attraction in the complex, lines one side of the complex’s atrium and seemed — at first — to provide a banal respite from Area15’s sensory overload. Along the sale aisles I found Nut Free Salted Peanuts, Gut Monkey Ginger Ale and cans of Camels Implied Chicken Sop.

My kids, good campers, immediately ducked into a small demonstration tent erected in the back of the store. They never came out again. A hidden entry brought them through the wall and into a world of artificial lawns, lava-filled caves, drab offices, a desert canyon, locker rooms, a secret bar and other divergent spaces often linked by hidden entrances. “Pull every knob and open every closet you see, Dad,” my daughter, Vivian, breathlessly advised as she whizzed by me for the fourth time in this 52,000-square-foot maze.

Created by the renowned Santa Fe artist collective Meow Wolf (the name derived from pulling two random words from a hat during their first meeting), Omega Mart is an amalgamation of some 325 artists’ creations tied together by disparate overlapping story lines which one can follow — or not.

For a short time, I tracked the story of the takeover of Omega Mart’s corporate headquarters by a hilariously manipulative New Agey daughter, and then got sidelined into the tale of a teen herbalist leading a rebellion to something else. I have no idea what I experienced other than that Brian Eno composed the music to one of the installations. None of my kids could explain what they experienced either, other than something mind-expanding. If it wasn’t for dinner, we might still be in there.

Dinner! The choices are dizzying and there are now 10 Michelin-starred restaurants in the city. We weren’t going to any of them.

Leaving Area15, even the distant lights of the Strip seemed relatively calming. But we were driving the opposite direction, to Chinatown.

A decade ago, Chinatown was mainly a small enclave of restaurants and shops behind an ornate red gate overlooking a strip mall called Chinatown Plaza, catering to Vegas’s growing wave of Asian immigrants. Chinatown has now expanded to the far reaches of Spring Mountain Road, a desert Hong Kong of neon signs in Mandarin, Japanese, Vietnamese and Korean, advertising restaurants, coffee houses, foot-massage salons and lots of stuff I couldn’t read.

Our goal was an unlikely corner of a strip mall, where hides, in the Jones family’s collective opinion, the best Japanese restaurant in North America, Raku. Step behind an understated white backlit sign and you enter an aged wood interior of an intimate restaurant that you might find off a Kyoto alley. We slid into the family-style tables behind the main dining room and commenced to feast. There’s a $100 tasting menu if you are feeling adult, but my tribe ordered cream-like tofu with dried fish, foie gras skewers and a dozen other items.

Chinatown became our go-to-spot for snacks and boba tea between adventures. A favorite spot became Pho 90, a low-key Vietnamese cafe with outstanding noodle dishes and exquisitely layered banh mi sandwiches for picnics in the wild.

Las Vegas’s expanding grid abruptly surrenders to the desert, which might be the most overlooked part of Vegas family vacations.

Red Rock Canyon, 17 miles west of the Strip, is like walking into a Road Runner cartoon with a Technicolor ballet of clashing tectonic formations. We grabbed our admittedly reluctant brood on a 2.4-mile, round-trip hike on the Keystone Thrust Trail through a series of gullies until we emerged above epic white limestone cliffs jutting through the ocher-colored mountains. Here we had our Vietnamese picnic overlooking the monolithic casinos in the distance.

Our last night’s excursion into nature didn’t take any persuasion: Half an hour’s drive south to Boulder City, a company called Rail Explorers has set up rail bike tours on the abandoned tracks leading to the Hoover Dam construction site. We booked a sunset tour (from $85 to $150 for a tandem quad bike). After some quick instruction, we, along with three dozen other visitors, climbed into an 800-pound, four-person Korean-made bike rig and, giving the group ahead of us a three-minute head start for some space, started peddling.

Our route was along four miles of desert track gently sloping into a narrowing canyon pass. As we effortlessly peddled at 10 miles per hour, we noticed that the spikes holding down the railroad ties were often crooked or missing. “I bet these were all driven in by hand,” my teenage son, Cody, a history buff, noted.

In the enveloping dusk, we glimpsed shadows moving along the sagebrush: bighorn sheep, goats and other critters emerging for their nocturnal wanderings. But the most surreal sight was at the end of the ride, where a giant backlit sign for a truck stop casino appeared over a desert butte — Vegas was beckoning us back, but now we welcomed the summons. Here we were, peddling into the sunset, feeling more athletic, cool and (gasp!) enlightened than when we first rolled into Vegas four days ago. Oh what good parents we were!

“The moniker of ‘Sin City’ is totally wrong,” Mr. Alvarez told me, “if you know where to look.”