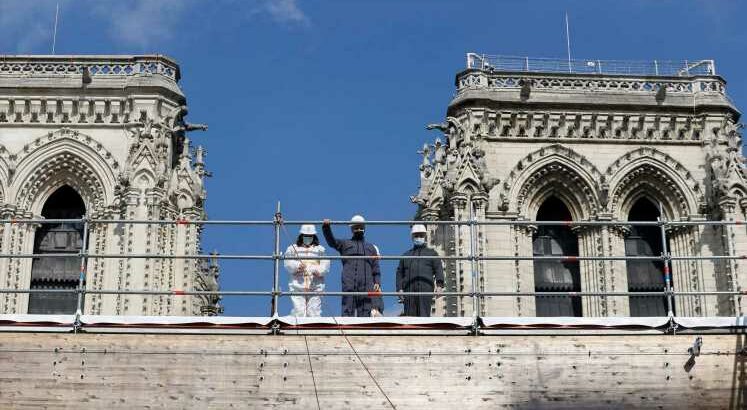 PARIS — Two years after a fire tore through Paris’ most famous cathedral and shocked the world, French President Emmanuel Macron on Thursday visited the building site that Notre Dame has become to show that French heritage has not been forgotten despite the coronavirus.

Flanked by ministers, architects and the retired French army general who is overseeing the restoration of the 12th century monument, Macron assessed the progress of the ambitious rebuilding project and offered the pandemic-weary French public some hope that a completion date will arrive one day, if not in the near future.

“We’re seeing here how, in two years, a huge work has been accomplished,” Macron said, recalling the “emotion” throughout France at the images of flames devouring Notre Dame on April 15, 2019. “We also see what’s remain to be done.”

Macron promised the cathedral would be rebuilt by 2024, yet officials acknowledge the work won’t be fully completed by then. They cite factors such as the COVID-19 pandemic for having slowed down the pace. The blaze also distributed vast amounts of toxic lead onto Notre Dame and the surrounding area, complicating the clean-up work that came before restoration efforts could even begin.

The French president offered “a huge thank you” and a message of determination to all the workers mobilized to rebuild Notre Dame.

“We will need to meet our goals” set for three years from now, Macron said.

“The objective … is to return Notre Dame to worshippers and to visits in 2024. That means that in 2024, Mass will be able to be organized in the cathedral,” Jeremie Patrier-Leitus, a spokesperson for the restoration, told The Associated Press. (Photo: Ian Langsdon/POOL/AFP via Getty Images)

Cranes and scaffolding from the massive project scar the French capital’s skyline, and the rebuilding work could take decades. Officials said earlier this month that the burned-out cathedral and its esplanade could remain under construction for another 15 or 20 years. But they pledge Notre Dame will be at least be open for prayer and a “return to worship” in time for the 2024 Summer Olympics, which Paris is hosting.

“The objective…is to return Notre Dame to worshippers and to visits in 2024. That means that in 2024, Mass will be able to be organized in the cathedral,” Jeremie Patrier-Leitus, a spokesperson for the restoration, told The Associated Press.

Patrier-Leitus wants the world to know that “Notre Dame is holding up. It is still there. We are all gathered and mobilized to restore the cathedral and give this jewel of French Gothic architecture back to the world.”

It remains to be seen if the cathedral will be in shape by then to welcome the some 20 million tourists it received each year before the fire.