Un great railway journey of the world! Now you can book a train ticket for WIGAN to NORTH KOREA (for £3,195, but it does include hotel stays along the way… and a packed lunch)

‘A single from Wigan to Pyongyang, please.’

That’s a request no rail passenger has ever been able to make. Until now.

That’s because a travel company has launched a £3,195-month-long rail tour that takes tourists from the Greater Manchester town to North Korea’s capital. 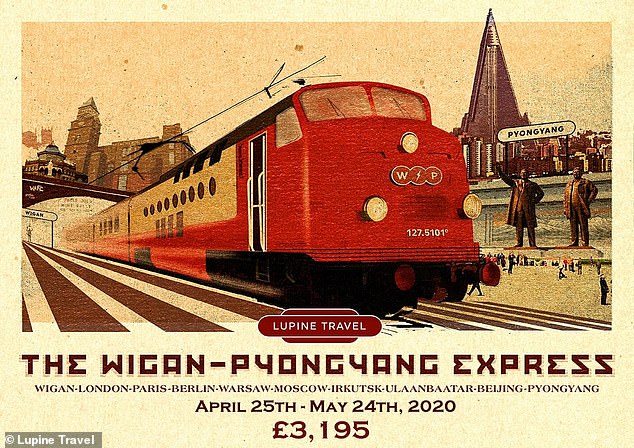 Holidaymakers can now book a journey from Wigan to North Korea – by train – for £3,195

The tour also takes in seven other cities on the way to Kim Jong-un’s hermit country, including London, Berlin, Warsaw, Moscow, Irkutsk, Ulaanbaatar and Beijing.

The trip, which begins on May 25, 2020, is being offered by Lupine Travel and the first leg of the journey is from Wigan North Western to London Euston. As passengers board they will be given a packed lunch consisting of pie barm – a pie sandwich considered a local delicacy – and a can of fizzy Vimto.

While in London, travellers will be taken to Highgate Cemetery to visit the grave of Karl Marx before boarding a Eurostar to Brussels and then another train to Berlin.

After a day in the German capital, travellers will board a train to the Polish capital Warsaw before catching a overnight sleeper to Moscow. 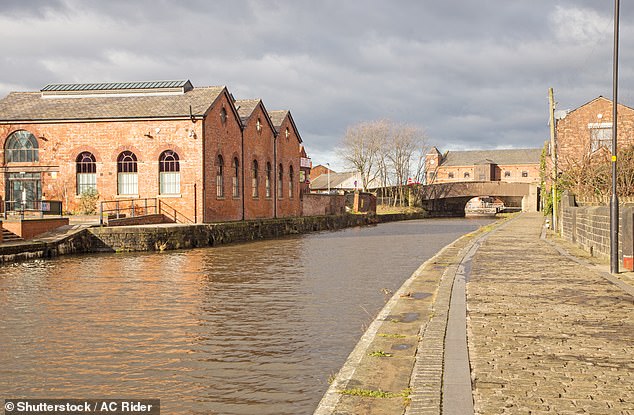 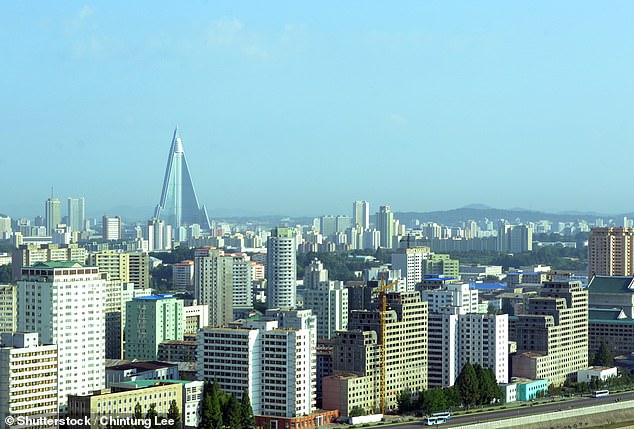 The month-long tour ends in Pyongyang, pictured. In Pyongyang excursions on offer include a visit to the Demilitarized Zone and a trip to Mount Myohyang

In Moscow, a trip to Red Square is laid on. Here travellers can visit Lenin lying in state.

The tour then makes the long trip, over two weeks, from the Russian capital to Beijing, taking in sights such as the Ural Mountains, Ulaanbaatar – the capital of Mongolia – and the Great Wall of China.

Once in Beijing, there will be three days to explore before boarding a sleeper train to Dandong, close to the North Korean border.

After a day in Dandong, the tour then heads to its final stop of Pyongyang via another train. 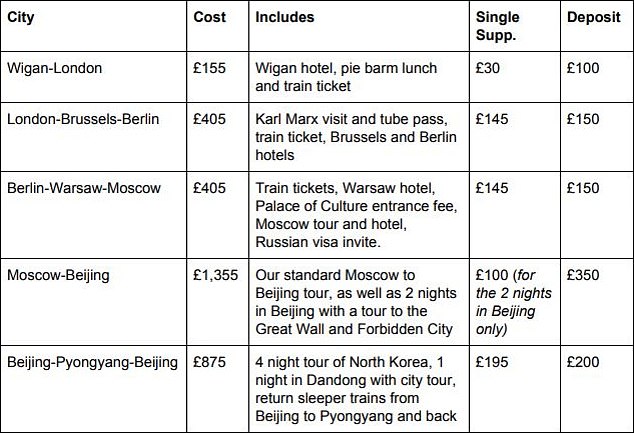 In Pyongyang excursions on offer include a visit to the Demilitarized Zone and a trip to Mount Myohyang.

The price of the trip includes all travel, accommodation, trips and some meals.

However, Lupine Travel isn’t the only company to offer train travel to North Korea from the UK.

According to The Man in Seat 61, companies including Regent Holidays and Koryo Tours can organise train travel to Pyongyang via either Moscow or Beijing.