Once a bazaar and kosher slaughterhouse for Kazimierz, Krakow’s old Jewish quarter, Plac Nowy — or “New Square” — is today known for its open-air flea market and food stalls.

So on a recent visit, I ordered zapiekanka (a traditional Polish sandwich) and perused the souvenir stands as I waited for the cheese to melt.

There were, of course, shot glasses, figurines, mood rings and other standard tourist trinkets.

And then there were the “Heil Hitler” signs.

The sale of Nazi memorabilia might seem troubling in a country where three million Jewish residents and as many as three million non-Jewish Poles were murdered under Nazi occupation during World War II. (Among those Jews were my great-grandmother’s family members in Białystok.) It might also seem unusual in a place where the government has taken bold steps to quash free speech and control the historical narrative.

Yet Nazi swag is not uncommon in Poland today, and it’s particularly easy to find in tourist hubs. (Alongside the “Heil Hitler” keepsakes were National Socialist party signs; in a neighboring stall was gear with the Soviet-era hammer and sickle.)

Laws prohibiting the promotion of Nazi ideology or Holocaust denial exist in about a dozen European countries including Poland, a policy that should — in theory — regulate the sale of items like those I encountered in Kazimierz. But several legal experts and scholars, likening the offense to a petty crime or the crossing of a red light, said that the rule is little enforced there.

I was traveling through Germany and Poland with the Fellowships at Auschwitz for the Study of Professional Ethics, a program that looks at the role of journalists, lawyers, doctors, businesspeople and religious leaders in the Holocaust. Following several days of study in Berlin and Krakow, we had spent the morning exploring Kazimierz before a drive to Auschwitz and Birkenau, the Nazi concentration and death camps. A few of us were grabbing lunch for the road when we noticed the “Heil Hitler” signs for sale and, keeping with the themes of our trip, began debating the ethical questions they raised.

Violence against minority groups in Poland has remained high since the right-wing Law and Justice party took control in 2015, said Rafal Pankowski, a co-founder of Stowarzyszenie Nigdy Wiecej, the Never Again Association, which runs one of Poland’s largest hate speech and hate crime registers. There was a notable spike in anti-Semitism following the passage of the controversial Holocaust law last February, he added, which made it a crime to accuse Poles of involvement in the genocide.

“I’ve been dealing with the issue of anti-Semitism for more than 20 years now, but I didn’t think I would live to witness what we witnessed in Poland this year,” Dr. Pankowski, a professor at Collegium Civitas in Warsaw, said in November. “We saw it this year in media and in politics on a level that I think is quite unprecedented in recent Polish history.”

Eliza Rutynowska, the advocacy officer for the Polish Society of Anti-Discrimination Law, cited the recent Independence March in Warsaw as an example.

“We have a government that is openly supportive of far-right, alt-right rhetoric,” Ms. Rutynowska said in light of the event, where nationalist activists shouting racist slogans marched behind President Andrzej Duda and elected officials. “We are very worried seeing this, because this directly translates to incidents on the street; we are hearing about hate crimes every week.” 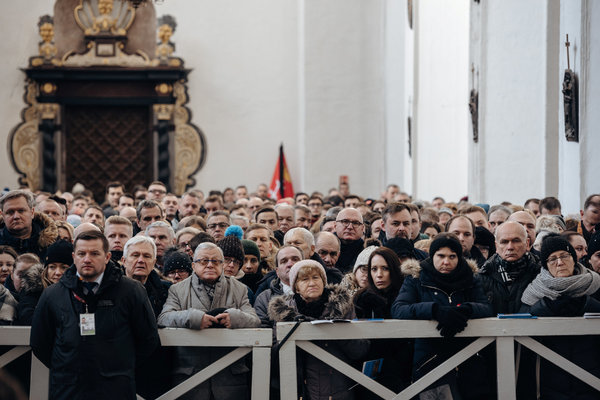 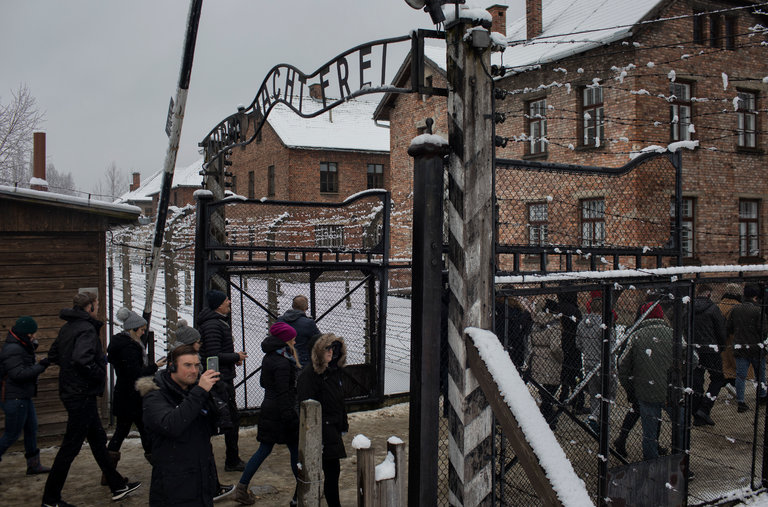 The assassination on Jan. 13 of Pawel Adamowicz, the left-leaning mayor of Gdansk who was stabbed to death onstage at a charity event, has further fueled a national discussion on hate speech in politics.

It’s difficult to track whether the resurgence of neo-Nazism has caused a spike in the production of Nazi souvenirs. But the prevalence of these attitudes helps explain why I found “Heil Hitler” signs for sale in New Square, which was once called “Jewish Square” (Plac Zydowski).

There were 60,000 Jews living in Krakow before the war, a quarter of the population; today, there are about 200. The Jewish district now feels at once like a tribute to and a caricature of what it used to be: Outside the Old Synagogue (Poland’s oldest), bright green trolleys advertising tours of Schindler’s factory bounce along the cobblestone. Near Remuh Synagogue and the Old Cemetery are kitschy, Jewish-looking restaurants with Hebrew signs and waiters offering picture menus to passers-by.

Whatever the sentiment, seeing “Heil Hitler” signs in the neighborhood was jarring. But the legality of it, I soon learned, is an ongoing debate.

“Whoever, in order to distribute, produces, records or brings, buys, stores, possesses, presents, transports or sends” the aforementioned items, or those with “fascist, communist or other totalitarian symbolism,” can be subject to that punishment.

But there’s a caveat: Violators are exempt “if the act was committed as part of artistic, educational, collecting or scientific activity.” Sales of antiques or collectibles with some historic, academic or artistic value are permitted; sales of recent reproductions are not.

It’s one of many ambiguities that makes the provision ineffective, according to Katarzyna du Vall, a lawyer in Krakow. “You don’t know who is an artist, educator, collector or researcher,” she said.

Another is the vocabulary. “The biggest problem from a legal perspective is what, exactly, ‘totalitarian state’ means,” Ms. du Vall said, explaining how contemporary scholars — political scientists, sociologists, lawyers and other experts — cannot agree on one binding definition.

“We talk about Article 256 a lot in Poland, and people don’t understand why those proceedings end up with nothing,” she said. “It’s really hard to enforce a law that is not clear for anybody — for judges, for those who punish, for those who commit those crimes.”

Rober Opas, a deputy chief of police in Warsaw, acknowledged the law and said violators would be punished. But “from our point of view,” he said in an email, “the problem is sporadic, and we do not receive many reports of this kind.” He also noted that it is the Polish court that determines the punishment for each perpetrator.

Because of the legal loopholes, though, cases concerned with the trade of racist or anti-Semitic paraphernalia rarely reach Poland’s prosecutor general, said Ms. Rutynowska.

Although anti-Semitic incidents constituted half of all hate crimes in New York in 2018, I have yet to see a “Heil Hitler” sign at my local greenmarket or among the snow globes in Times Square. And while it’s possible to locate just about anything on the internet, I can’t easily find Nazi mementos on mainstream websites, either. Amazon stopped selling most products featuring Nazi symbols in July; eBay and Yahoo did the same almost two decades ago.

So I snapped a photo of the souvenir stand — not unusual for any tourist in a public place — put the camera away and sunk my teeth into my fresh-off-the-press zapiekanka. But before I’d finished chewing, the vendor had approached me angrily, demanding in Polish that I delete the picture. Photographing his goods was illegal, he told me, and he would call the police.

He came closer, shouted louder. “Delete the picture now,” he insisted again, this time trying to enlist the help of our Polish tour guide to persuade me.

Because if he was abiding by the law, so was I.

Alexandra S. Levine is a New York Times staff reporter for Metro whose feature writing has also appeared in the National, Style and Travel sections, among others. Joanna Berendt contributed reporting from Warsaw for this article.