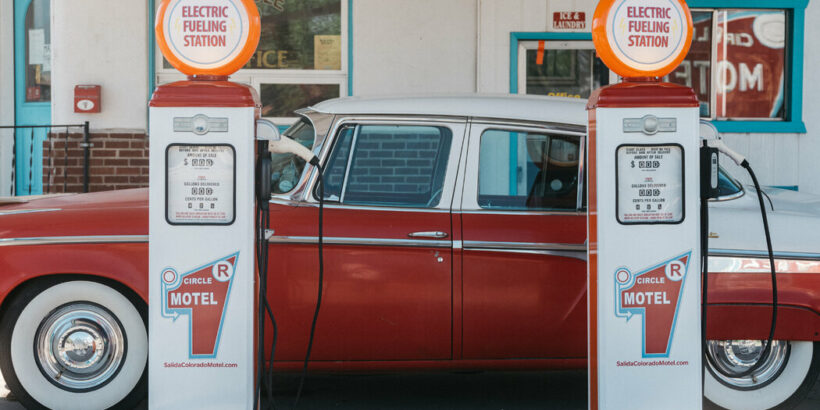 Unless you are one of the estimated seven percent of Americans who own an electric vehicle, it’s pretty hard to take a scenic, emissions-free road trip. But for those owners and other eco-conscious travelers who can rent an electric vehicle — and it’s not always easy to find one — Colorado is inviting you to meander far from the charging stations clustered in big cities.

This summer, the state has “electrified” seven of its 26 Scenic & Historic Byways, routes designated for their natural, educational or historic features that often traverse wild areas where jaw-dropping sights make you appreciate the pavement that got you there.

Charging stations can be found roughly every 100 miles on these routes, which range from the namesake plateau and lakes around Grand Mesa to the seasonal Trail Ridge Road reaching over 12,000 feet in Rocky Mountain National Park. More than 140 fast-charging stations, plus 34 planned or available on Colorado’s “corridor” interstates and highways, help E.V. drivers get to them. 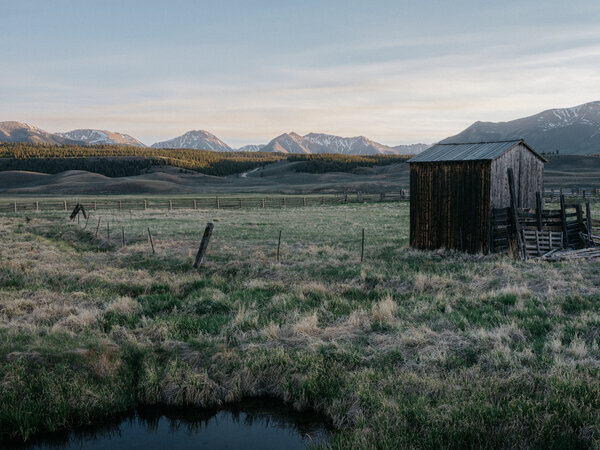 Given that transportation is the biggest emitter of greenhouse gases in the United States, E.V.s are central in efforts to fight climate change. The Biden administration’s infrastructure plan proposes $15 billion to build half a million charging stations nationwide. California and Massachusetts will require all new cars sold in those states to be electric by 2035. Electrifying Colorado’s entire byway system is a product of Gov. Jared Polis’s plan to make the state’s electric grid free of fossil fuels by 2040.

To test Colorado’s new system, I drove all or parts of three of the state’s electrified byways over roughly 450 miles in early June, including the Lariat Loop near Golden, about 15 miles west of downtown Denver; the Top of the Rockies south of Vail; and its continuation along Collegiate Peaks, south to Salida.

Unlike road-tripping with a combustion engine, everything about E.V. road-tripping was to me, a novice E.V. driver, a learning curve in the following lessons.

The first hurdle in traveling Colorado’s electric byways is finding an electric vehicle. They are scarce among major car rental companies, though by year-end, the Dollar and Thrifty rental car outlets at the Eagle County Regional Airport near Vail plan to add them.

To rent an E.V., I turned to Turo. The Airbnb of cars, Turo allows car owners, also called “hosts,” to rent their vehicles via the platform. Even there, E.V.s were not common, and I ruled out Teslas, which tended to start above $150 a day.

For best results, I quickly learned, start in a city. When I moved my search from Aspen to Denver, I found Nathan’s 2020 Nissan Leaf for $59 a day for my four-day adventure.

After learning my plans, Nathan lived up to his “All-Star Host” status by messaging me with an online map he had created of my longest drive, showing the route mileage from Denver west to Vail, then south to Salida and back on a website called A Better Routeplanner, which included suggested charging stops.

It was an early indication that I would trade spontaneity for certainty. While gas stations are ubiquitous, allowing road-trippers to improvise, the scarcity of E.V. charging stations dictates where you can go and how far between recharges, often resulting in what E.V. owners call “range anxiety,” a condition Colorado’s byway electrification plan aims to combat on the rural roads.

Learn E.V. math and app up

I picked up Nathan’s Nissan Leaf from his home near Denver International Airport. The car was charged to 100 percent with an estimated 230 miles on the battery. But the mileage calculation frequently shifts, as I learned over the course of the trip, affected by inclines and cold weather, both of which eat more battery charge, and replenished by hooking up to a charger and braking or driving downhill when the battery regenerates. One fellow E.V. driver I met in Golden even recommended turning off the air conditioning — done, rather uncomfortably on an 80-degree day — to stretch battery life.

To find public charging sites, I downloaded the PlugShare app, which maps them. The slower, or Level 2, chargers on the byways tended to be free and added about 25 miles in an hour. Direct-current fast chargers, which you pay for, are more powerful and quicker, though how quick and how powerful is subject to a lot of variables, including battery size, existing battery charge and powering speed. According to the Energy Department, it can take between 30 minutes on a fast charger and a full day on the slowest charger to fully recharge.

D.C. fast chargers may be priced by the minute of use or the kilowatt hour dispensed, but Electrify America, which operates such stations across the country, said the average cost of bringing a battery to 80 percent charge — the going rate quoted in the E.V. industry as the final 20 percent is often slowed down to preserve battery life — is between $16 and $20.

Additionally, to use public chargers, I needed a credit-card-linked account with the app ChargePoint, which unlocks the charger hoses even when the charge is free — it was an often glitchy process to get my phone to talk to the kiosks.

Though I used only about 40 battery miles to reach the new Eddy Taproom & Hotel in Golden (from $209), I plugged the car in overnight at its complementary charger, one of the amenities, including loaner bicycles for town touring and local beer on tap, that made it the ideal day-one stop for quelling range anxiety.

Every mile is not created equally

You could drive the 40-mile Lariat Loop from Golden into the foothills of the Rocky Mountains in about 80 minutes. But as I quickly learned of all scenic byways, many attractions, trails and pullout photo ops urge you to stop, extending the ride.

After hiking the 1.5-mile Triceratops Trail in Golden to see fossilized dinosaur tracks, I continued south to Red Rocks Park and Amphitheater, a concert stage framed by 300-million-year-old sandstone monoliths. Leaving Red Rocks, the route wound beside tumbling Bear Creek through a rock-walled canyon with continuous snaking curves that made driving the E.V., which hugged the corners, thanks to its low center of gravity, a joy.

I took my eye off the Leaf’s mileage range for most of the rolling drive until the last stop atop 7,377-foot Lookout Mountain back near Golden, home to the grave of the Western showman “Buffalo Bill” Cody and views well past Denver. Over five miles, the road switched back around 56 curves, sending the car’s computer into a mileage dive.

Lookout Mountain taught me the value of a full charge when ascending, which I would have to do to reach Vail via I-70 over 10,666-foot Vail Pass.

While gas-powered engines also use more energy to get up hills, drivers can relax, knowing there’s a gas station at nearly every interstate exit. Not so E.V. drivers. About 60 land miles into the trip, I had used 125 battery miles — more than twice the anticipated rate — to reach 9,000 feet at Silverthorne. Thanks to some descending, I arrived in Vail with 40 percent battery charge and 95 estimated miles to spare.

Vail offers ample public chargers, its buses are electric and many hotels maintain their E.V. plug-ins. Mine, the trendy new Gravity Haus Vail (from $159), had the next best thing: free public E.V. chargers in the lot across the street and an overnight parking voucher included in the rate.

Charging is a lifestyle

By day three, with growing confidence in the car’s battery life, I set out to string together two electrified byways, Top of the Rockies and Collegiate Peaks, over about 100 miles of mountain driving, including crossing the 10,424-foot Tennessee Pass.

From the funky mountain town of Minturn behind Vail’s slopes, Highway 24 slaloms between roaring rivers and snowcapped mountains. The road terraces into granite walls and vaults one canyon in such a spectacular piece of engineering that I made seven viewing stops in the first 10 miles.

Reaching Leadville introduces the reason these roads flourished: mining. Seventy square blocks of Victorian homes, ornate hotels and an opera house attest to the town’s boom years in silver mining in the 1880s, when 30,000 people lived in the town, now home to fewer than 3,000 residents. A self-guided walking tour visits those buildings, many filled with museums, outdoor outfitters and arty shops, including Harperrose Studios and Elevation Goods.

Marrying sustainability to economic development, the electrification project targeted byway towns like my next stop, Buena Vista, on the Collegiate Peaks byway, with charging locations strategically placed to encourage drivers to patronize small businesses while waiting for their batteries to replenish. Making charging time touring time, I plugged in over lunch in view of Mount Princeton, one of the ““14ers” — mountains above 14,000 feet — named for Ivy League schools, and a hike on the Barbara Whipple Trail, watching rafters on the Arkansas River navigate the rapids. About an hour on the free Level 2 charger gave me a 25-mile boost.

At the end of the Collegiate Peaks byway, Salida, a 19th-century railroad hub, offers ample access to the outdoors — the nearly 22,000-acre Browns Canyon National Monument is just outside of town — and a thriving downtown of period buildings filled with restaurants, galleries and shops near E.V. charging stations.

Mostly what E.V. drivers need to do to begin the day with a full battery, which can take up to eight hours, is charge overnight. The retro Circle R Motel (from $75) provided that, with complementary chargers made from vintage gas pumps.

Still, a fully charged battery wouldn’t be enough to get me back to Denver, about 170 miles northeast, and return the car with at least a 50 percent charge, as requested. So, after an hour of mountain driving, I stopped in Fairplay, a tiny town on a scenic road not considered a byway and home to a D.C. fast charging station just a few blocks from a street filled with galleries and restored buildings from its mining heyday.

In a diverting hour, I got 60 miles for $20, which is far more than the going rate for gasoline and required I budget time for a stop rather than race directly to the airport. Like everything with scenic byways and E.V.s, it pays to take your time.

Electrify America, a charging network owned by Volkswagen and established as part of its 2016 settlement for its diesel emissions scandal, has mapped cross-country driving routes with stations on or close to interstate highways. For leisurely drives that veer away from heavily trafficked corridors, consider the following states.

California leads the nation in E.V. registrations, and has nearly 13,000 public charging stations, according to the Bureau of Transportation Statistics. The state’s tourism office recommends driving Highway 99, which has regular charging stations, through the agricultural Central Valley, including the wine district of Lodi. The route Drive the Arc offers charging stations in Northern California from coastal Monterey to Lake Tahoe in the Sierra Nevada range.

Oregon has more than 2,200 miles of scenic byways ready for E.V.s with charging stations spaced every 25 to 50 miles. The tourism office offers suggested itineraries on some of these, from the 383-mile-long Pacific coastal route beginning in Portland to a day trip from Eugene to some of the state’s 50 remaining covered bridges.

Among its electrified roads, the state of Washington has chargers posted along its 440-mile Cascade Loop, a route that circles the state and passes through various regions, including the North Cascades mountains, Lake Chelan Valley and Bavarian-themed Leavenworth.

The gas and electricity company National Grid has identified scenic E.V. road trips in Massachusetts, New York and Rhode Island. In New York, it recommends a trip around Lake George in the Adirondack Mountains, with a map to 10 chargers around town.