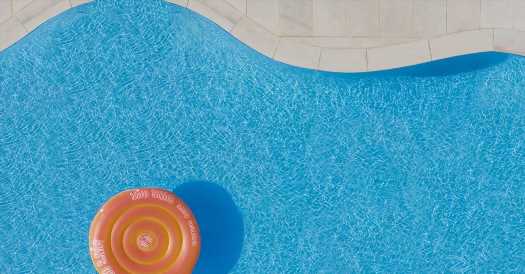 A pool can be soothing long before you wade into its waters. Even viewed from a distance, pools can evoke a sense of stillness, a sense of calm.

But often the most visually harmonious elements of pools remain hidden to us — until we look at them from a new perspective. 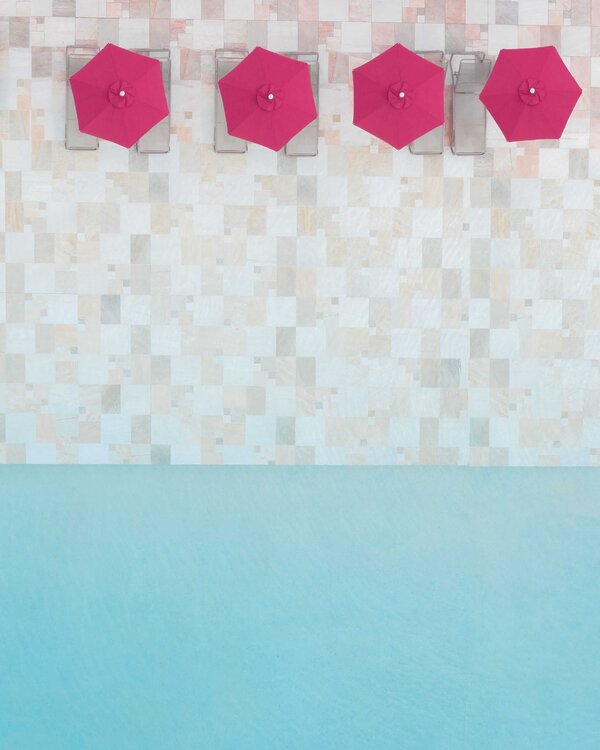 In 2018, after purchasing my first drone, I began shooting a set of images that would later become this series, “Pools From Above.” It’s the culmination of my long journey to discover the beauty in commonplace landscapes seen from unexpected vantages.

After shooting my first drone photos on a trip through Southeast Asia and Australia, I began experimenting more explicitly with new techniques: my use of negative space, compositional balance, leading lines, symmetry.

The outward balance and simplicity of these images often mask the difficulties I experienced while making them. The image titled “Time Warp,” taken in 2019 at a resort in Byron Bay, a coastal town in New South Wales, is a good example: It took me more than 50 attempts to achieve the perfect composition.

As much as I’m drawn to their visual features, pools, I’ve come to learn, also have distinct personalities.

Consider, for example, the image titled “Nostalgia,” taken in Bali. It features a cooler color temperature, hints of tropical flora and people lounging by the pool. The scene evokes a strong sense of tranquillity. If “Nostalgia” existed as audio, it might express itself as the calming sound of rain pattering on a tin roof.

Conversely, the image titled “Symmetry” was taken at a private location in Sydney and offers a prickly, traditional personality with its strict edges, imperfect surface bricks and deeper blue hues. I like to think of this one as personifying a grandparent who tells it like it is.

While often appreciated merely as architectural objects, pools retain an innate ability to trigger involuntary memory. For me, they can evoke the smell of my favorite food, or resurrect memories of my favorite holidays.

Partly, too, the series is an ode to pools’ less appreciated visual elements: their curves, their sharp edges, their diverse blue hues, the way elongated shadows play against their surfaces.

As is true with all photography, lighting — or, rather, the management of shadows — is one of the most crucial elements to the series. The time of day I shoot depends on the pool itself. If a pool has perfectly placed furniture around the rim, I shoot earlier or later in the day to extrapolate long shadows. If, instead, I want to avoid any shadows and focus on the shape of the pool itself, I shoot toward the middle of the day.

As the series progressed, I grew more targeted with my photographs. I began using Google Earth to scout locations, and the tool quickly became crucial in helping to avoid aimless shooting.

Once I obtain a rough outline of the pool, I then draw out as many possible compositions as I can imagine. Only then, after sifting through the possibilities, do I actually begin the process of capturing the image.

Most of these images were taken in the Southern Hemisphere — in Indonesia, the Philippines, Malaysia, Sydney and Melbourne, Australia.

I plan to extend the series to new countries once the world reopens. I’m especially keen to visit the Mediterranean, Mexico, and Palm Springs, Calif.

Like all forms of art, photography is an ever-evolving discipline. I’m grateful each day for the technological developments that have provided me with the tools to capture and showcase a unique set of perspectives.

Brad Walls is an aerial photographer who lives in Sydney. You can follow his work on Instagram.