Armed with cigarettes and a sense of joie de vivre, the colourful characters captured in this striking portrait series sum up Notting Hill in the nineties.

Taken by British photographer Sam McConnell, the candid black-and-white images hark back to a time when the west London neighbourhood was more gritty than grand, and gentrification hadn’t ironed things out. And before a certain 1999 Julia Roberts and Hugh Grant movie was filmed there…

Commenting on how the area has changed over the past few decades, McConnell told MailOnline Travel: ‘Back in the 90s it was complete hedonism but it’s all estate agents and Range Rovers today.’ 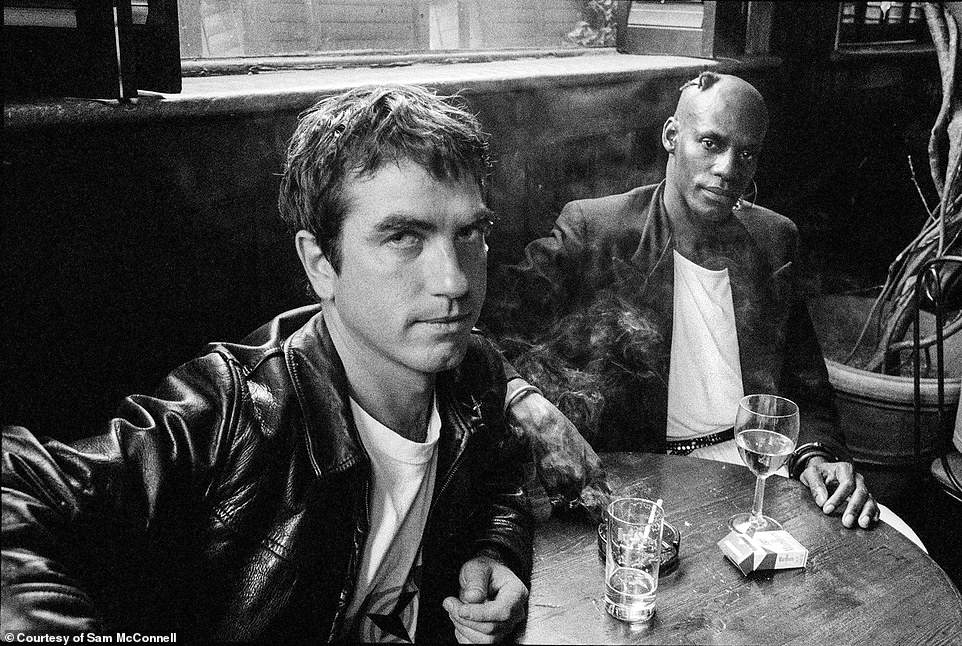 Taken by British photographer Sam McConnell, these candid black-and-white images hark back to a time when Notting Hill was more gritty than grand, and gentrification hadn’t ironed things out 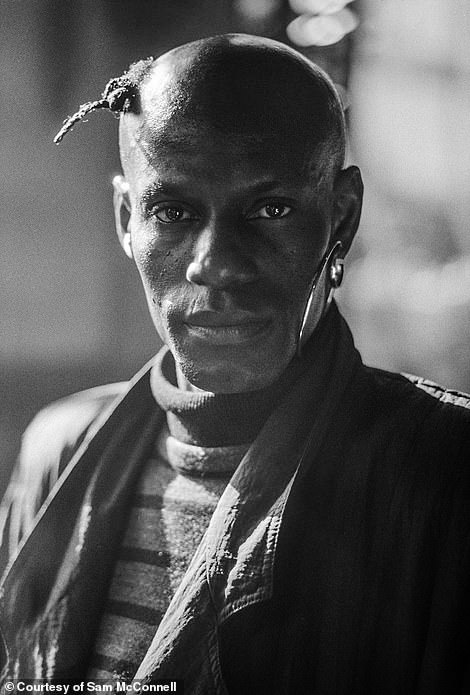 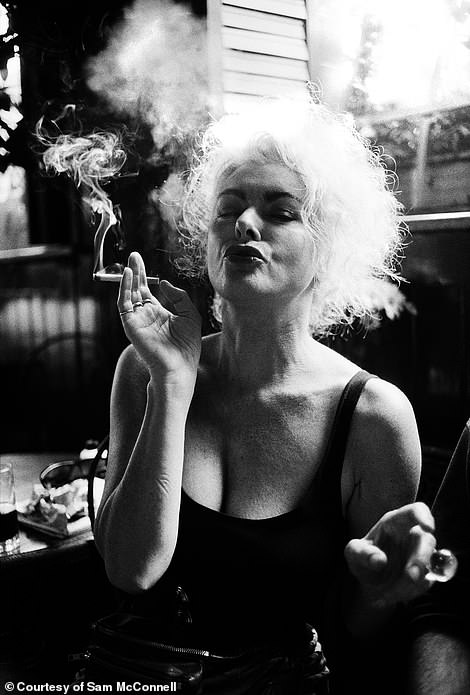 A blurb for McConnell’s exhibit, which is on show until October 9 at 230 Portobello Road, echos the same sentiment, stating: ‘In today’s Notting Hill you are more likely to be transported by a Range Rover than an Ecstasy tablet.’

Describing the characters who inhabited the area a generation ago, it continues: ‘Some black, some white, all joyful – who are clearly more interested in the moment than the mortgage.’

McConnell’s images focus on the ‘joy’, showing people in a pub or in the street, clearly having a good time.

One image shows a buxom blonde wearing a low cut top, defiantly blowing a puff of cigarette smoke towards the camera. 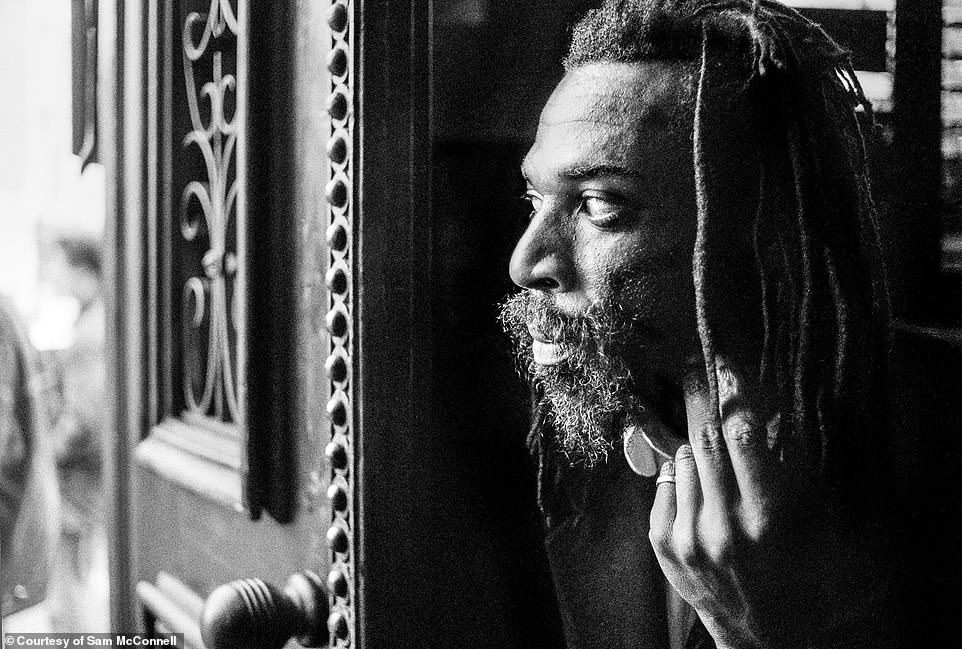 Commenting on how the Notting Hill area has changed, McConnell told MailOnline Travel: ‘Back in the 90s it was complete hedonism but it’s all estate agents and Range Rovers today’ 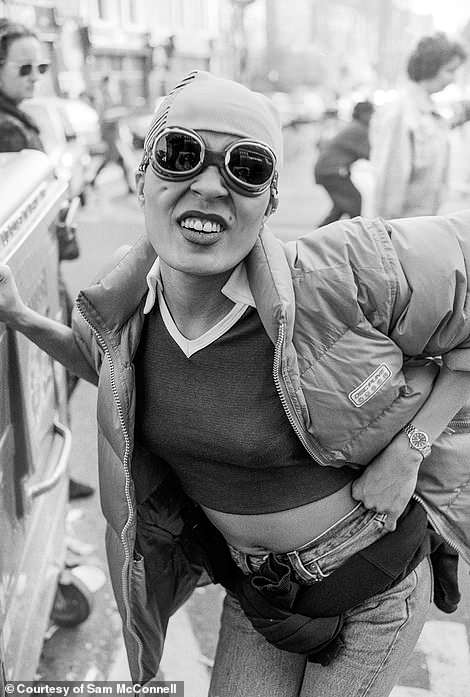 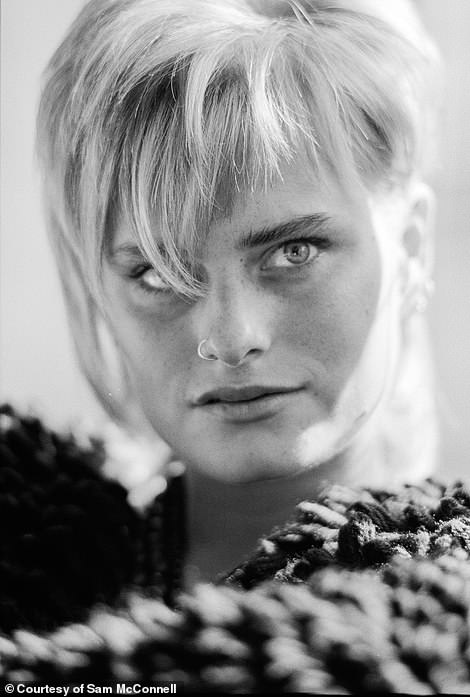 A woman pulls a cheeky pose for the camera wearing what appears to be a swimming cap and goggles (left), while another woman throws an intense glance beyond the camera’s focus (right) 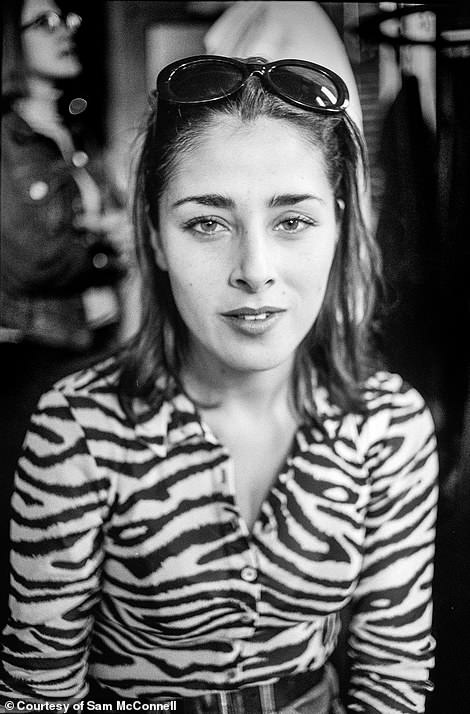 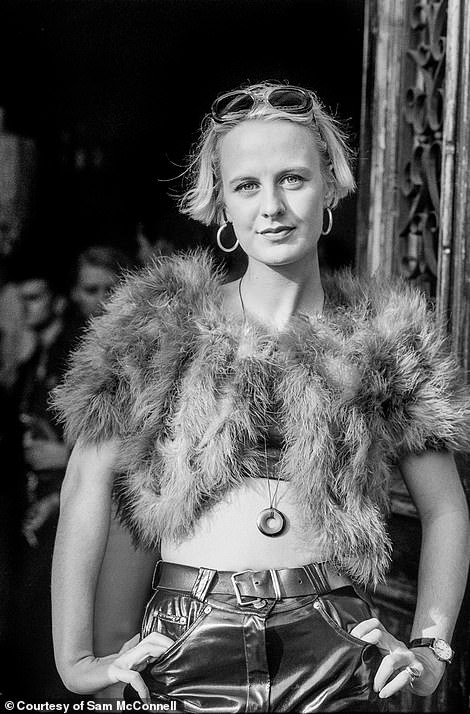 McConnell said he was in his late twenties when he took the photos and he grew up in the area, working at the famed Portobello Market every Saturday

A HISTORY OF NOTTING HIILL: FROM PIG FARMS TO MILLION POUND MANSIONS

According to the history site www.mynottinghill.co.uk, the Notting Hill area dates back as far as the 13th Century, when it was known as Knottynghull.

By the 18th century, Notting Hill was apparently known for its brick making and pig farming industries but sanitation was so bad, that the area was awash with ‘sewage, pig slurry and stagnant water’ – a far cry from its preened appearance nowadays.

However, after this tidy up, World War II and the Blitz destroyed a swathe of townhouses in Notting Hill and it gradually returned to its slum-like status, with residents occupying low-income housing. Mynottinghill.co.uk highlights that the ‘cultural heritage of Notting Hill also began to change in the post-war period as an Afro-Caribbean community began to develop in the area’.

This followed on from the British Nationality Act of 1948, which gave all Commonwealth citizens free entry into Britain.

Immigrants from the West Indies were particularly encouraged by this. Famously, more than 400 workers arrived from there on board the Empire Windrush, which docked at Tilbury, Essex, on June 22, 1948.

Many from the ship settled in Notting Hill, where they found cheap accommodation in the slums. Over the next two decades there was increasing racial tension between the white working class population of Notting Hill and their new Caribbean neighbours. Incidents of racially-motivated crime were on the rise and the 1958 Notting Hill race riots saw 108 people charged. A ‘Caribbean carnival’ took place on January 30 1959, designed to ease race relations in London. It was held indoors at the St Pancras Town Hall and was televised by the BBC.

It wasn’t until several years later in 1966 that the first carnival took place in Notting Hill. It was organised by Rhaune Laslett, who wasn’t aware of the previous event at St Pancras. She is credited with creating the festival, intended to promote cultural unity and inclusion and celebrate the best of what London’s minority communities have to offer.

Travelling to the present day, mynottinghill.co.uk concludes: ‘In the late 20th Century, Notting Hill started to regain popularity amongst upper middle class Londoners. Many of the former HMOs (Homes of Multiple Occupancy) have been converted back into large, single occupancy houses. The area has once again become a home to cultural elites and wealthy politicians. Notting Hill has some of the highest house prices in the country.’

Another shows two men giving McConnell some attitude as they sit in a pub drinking, one in a leather jacket, the other in a sharp blazer decked out with eye-catching lapels.

The photojournalist was overwhelmed when several of his former subjects popped in at his recent exhibit opening.

The Notting Hill residents proudly stood next to their portraits, showing that nothing much has changed, perhaps apart from a few grey hairs.

McConnell said he was in his late twenties when he took the photos.

He grew up in the Notting Hill area and worked at the famed Portobello Market as a young lad every Saturday.

McConnell went on to work as a freelance photographer for more than a decade but he is now better known for organising intrepid adventures in some of the world’s most remote areas after turning his attention to exploration and expedition leading. 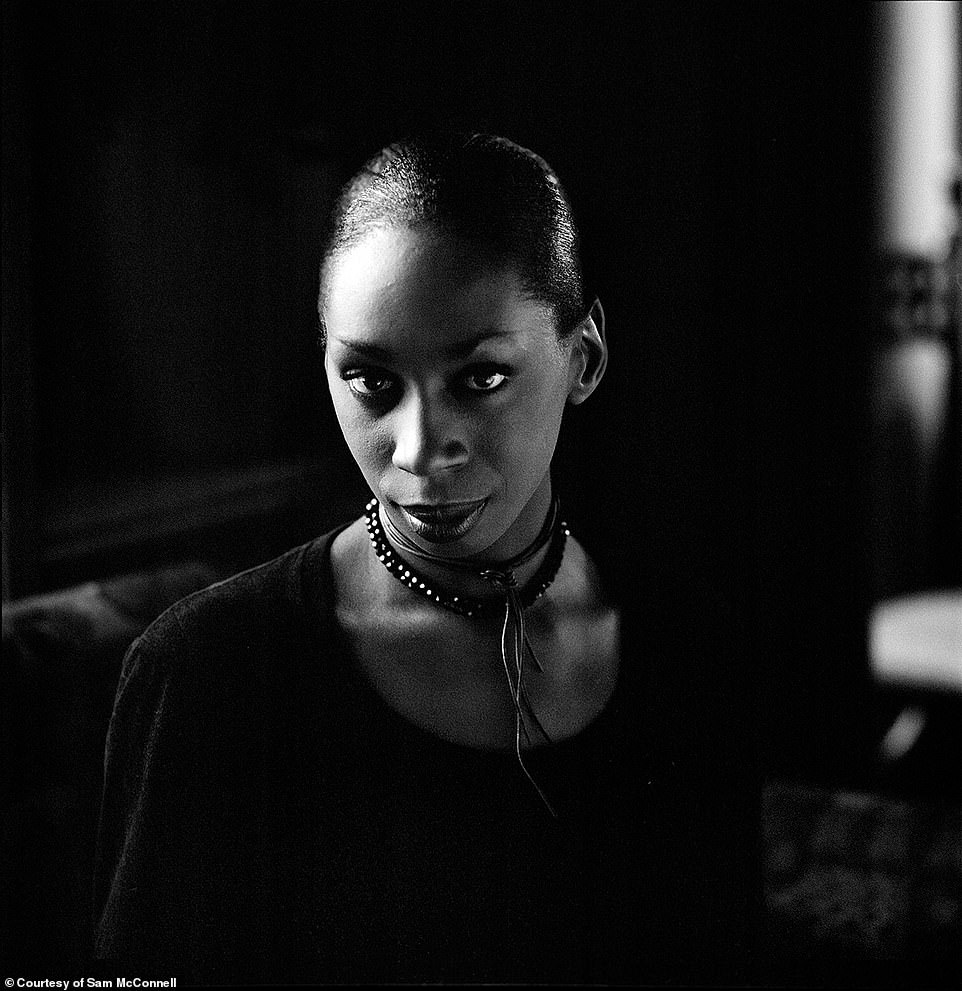 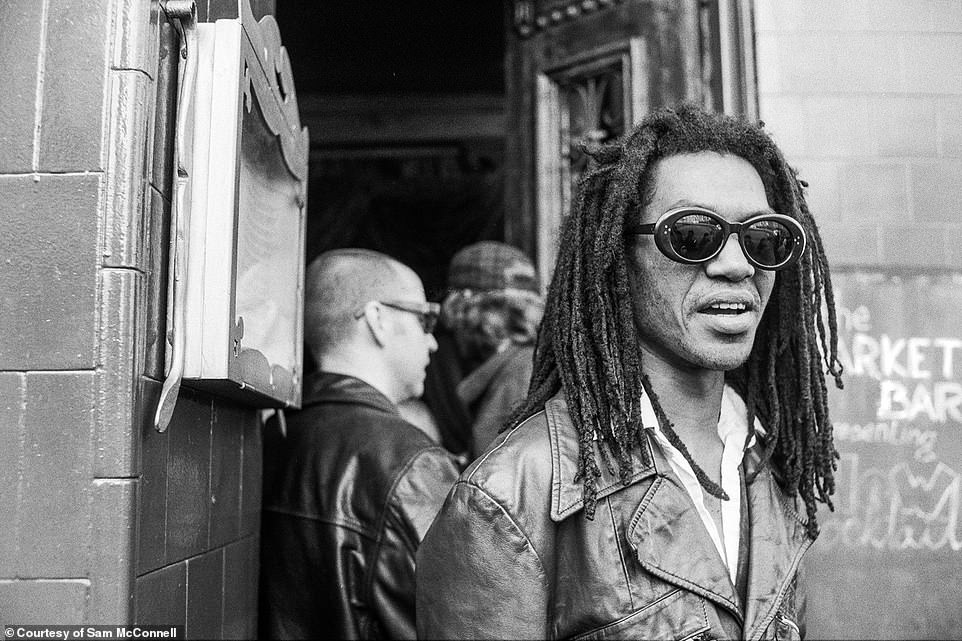 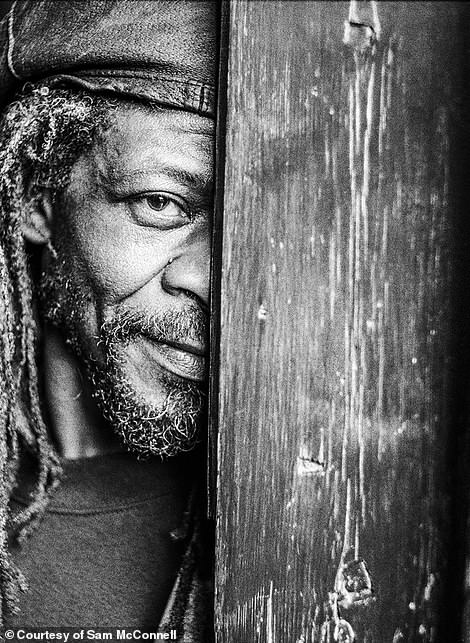 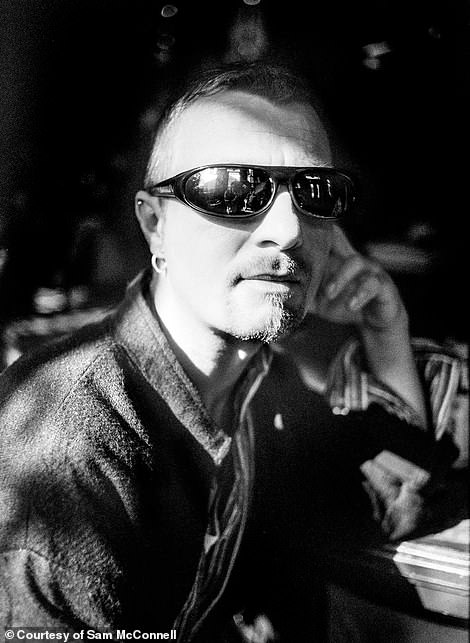 A man sports dreadlocks and a leather cap as he peers out from a doorway (left), while another Notting Hill resident casually poses for his portrait with his 90s-style sunshades on (right)