From over 135,000 entries, the amazing professional images shortlisted in the 2020 Sony World Photography Awards

The photographers vying for the top prize in this year’s Sony World Photography Awards’ professional category have been revealed.

And here we present a selection from the shortlisted entrants that shows exactly why they are pros.

The awards’ professional competition aims to recognise a ‘remarkable body of work for technical excellence and a fresh perspective on contemporary subjects’.

This year, over 135,000 photographs were submitted in the professional competition – the highest number of entries in the awards’ 13-year history. There are 10 categories including architecture, environment, natural world and wildlife, landscape, documentary and portraiture.

Scroll down and pick your favourite… 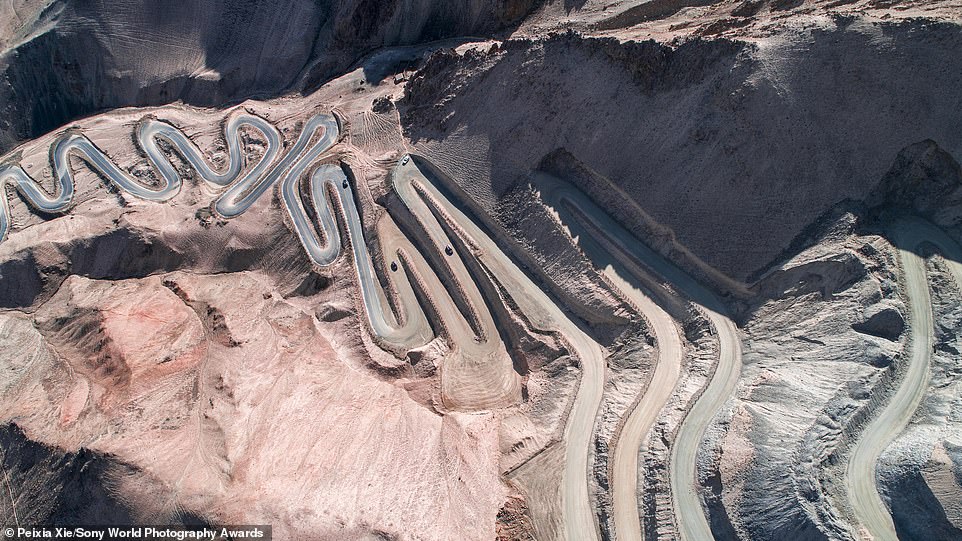 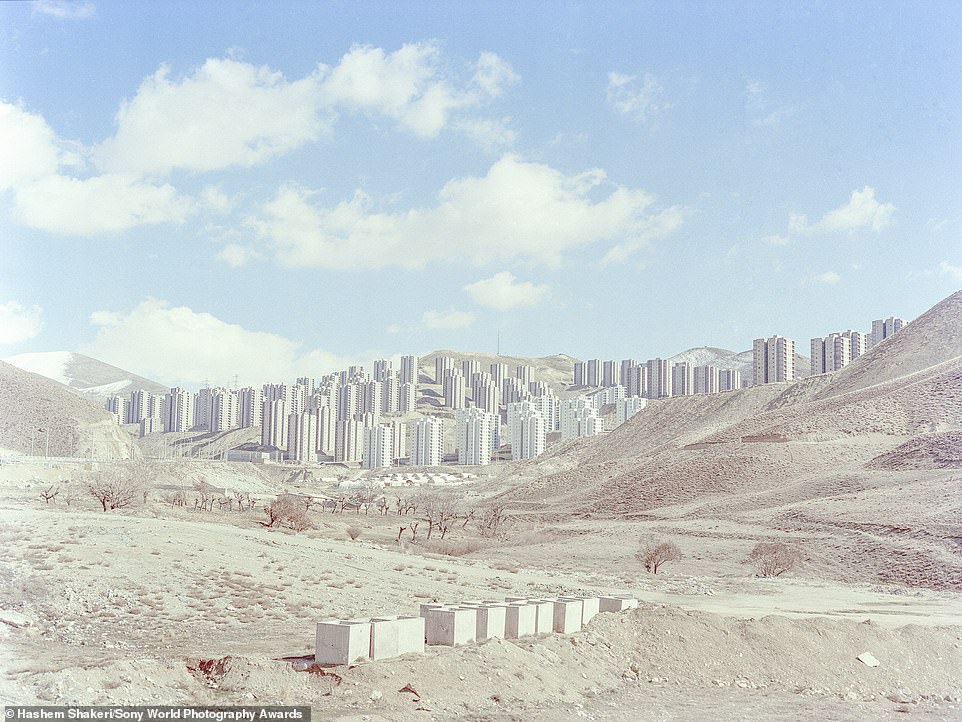 Hasheem Shakeri, from Iran, is a finalist in the discovery category for his series of images that look at the lives of those forced to leave the Iranian capital Tehran due to an economic downturn. This picture he captured shows half-constructed buildings in the new town of Pardis. He said: ‘Many of the apartments are owned by people who pre-purchased them many years ago and are still waiting for them to be completed so they can move in. However, the timing of the completion is being constantly postponed’ 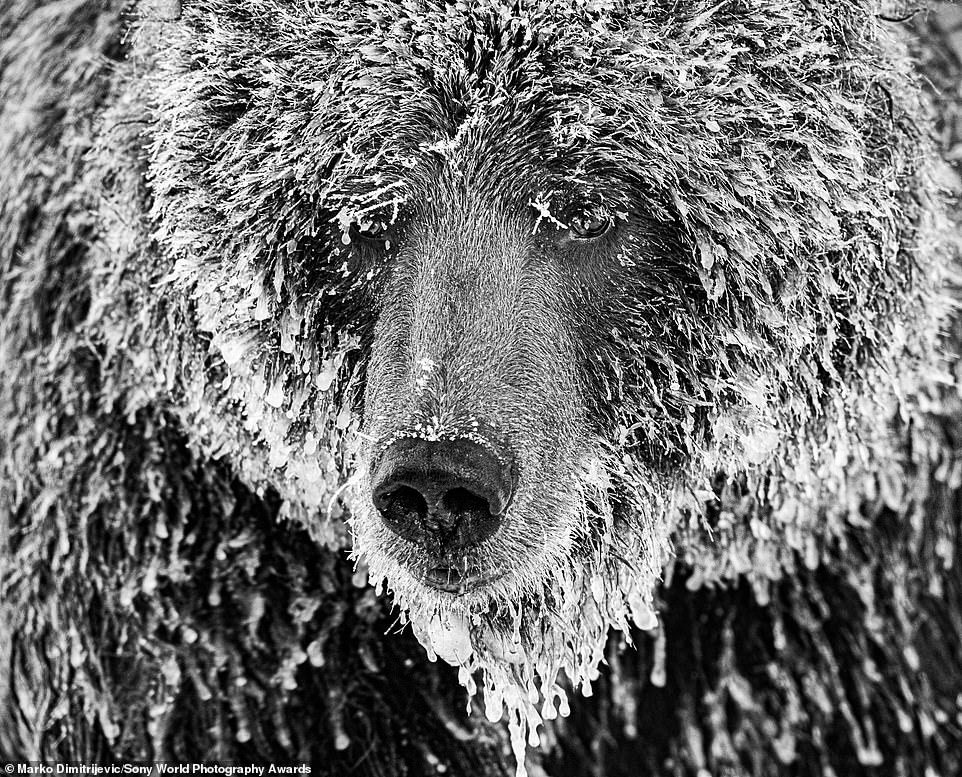 Marko Dimitrijevic from Switzerland is shortlisted in the natural world and wildlife category for his series of snaps of wildlife in the Yukon, Canada. Pictured is a shot by Marko of a grizzly bear who has been chasing salmon. He said: ‘With temperatures reaching -30C their wet fur instantly freezes when they get out of the river. The white icicles create a strong contrast on their dark fur giving their faces profound and varied expressions’ 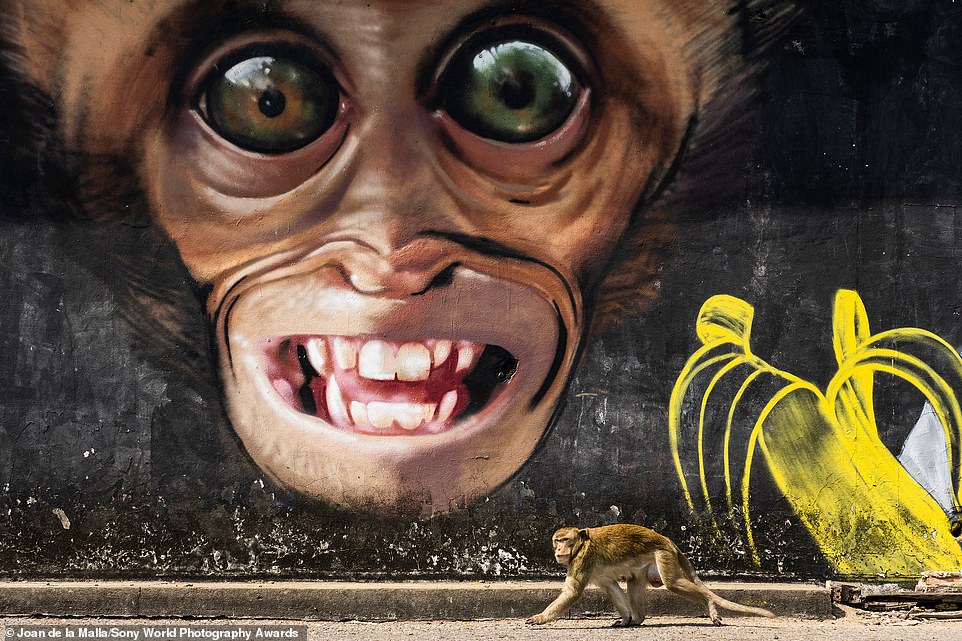 A macaque walks in front of a wall featuring monkey graffiti on the outskirts of the Thai city of Lopburi. The striking image was captured by Spanish photographer Joan de la Malla, who is shortlisted in the natural world and wildlife category. She said: ‘Many people in Lopburi have a great appreciation for the macaques’ 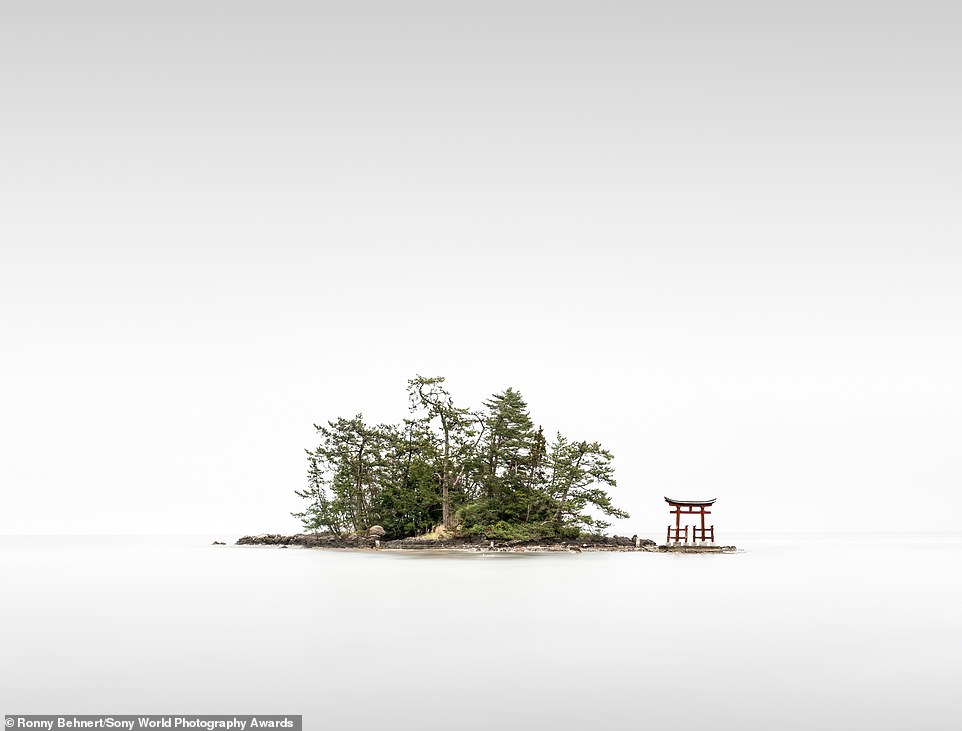 Ronny Behnert, from Germany, is a finalist in the landscape category for his series of photographs of Buddhist and Shinto temples across Japan. This image shows the Bentenjima temple on the west coast of Japan. He said: ‘It was like a little paradise, waiting for its visitors. I liked the combination of the detailed green trees and the beautiful red torii gate’ 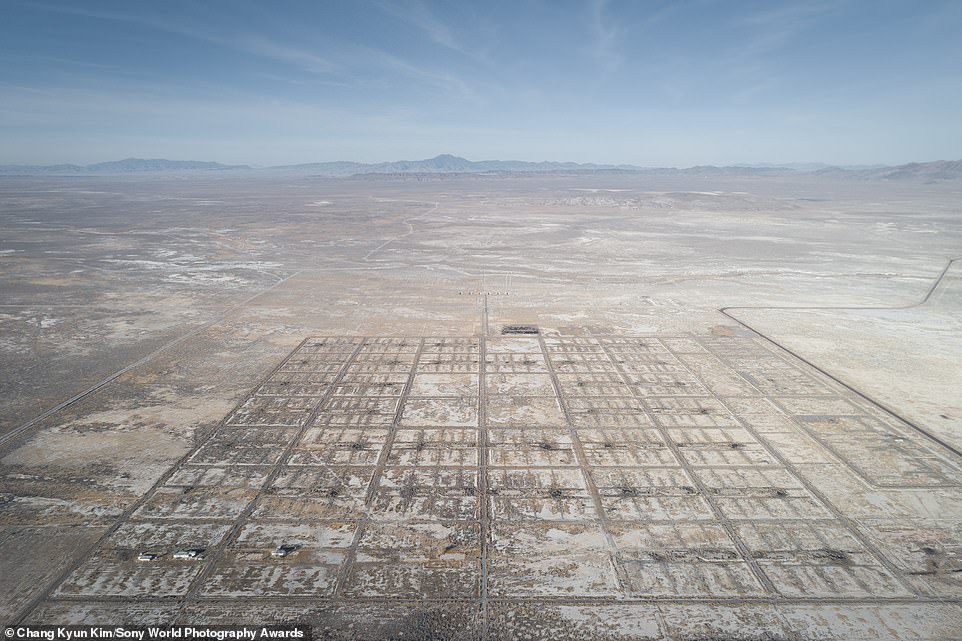 Korean photographer Chang Kyun Kim is shortlisted in the landscape category for a series of images that show Japanese internment camps, where thousands of US citizens and residents of Japanese ancestry were imprisoned during the Second World War. Pictured is the Topaz War Relocation Center in Delta, Utah. He said: ‘I tried to show this long-lasting artefact and the harsh landscape that surrounds the campsite’ 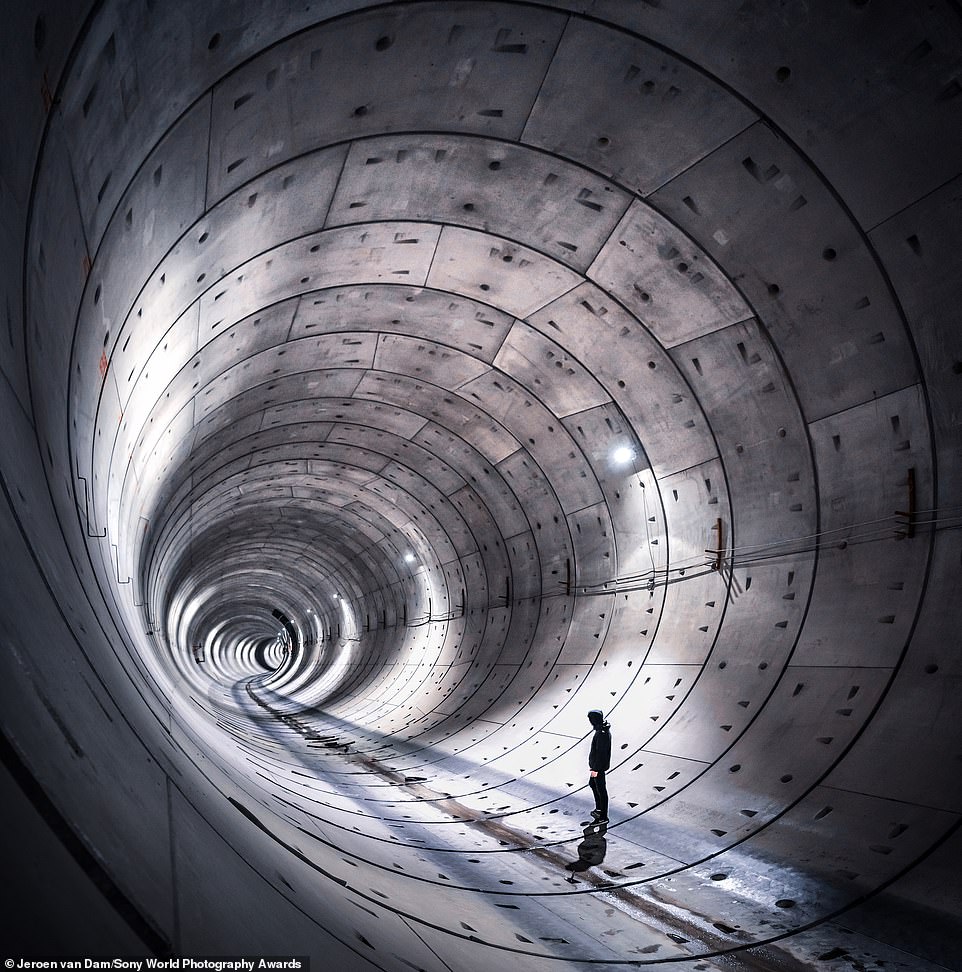 A dramatic image by Dutch photographer Jeroen van Dam at an unknown location. He is shortlisted in the landscape category for his series of images following urban explorers. He said: ‘I follow these people all over the world, documenting their adventures. This particular series features tunnel systems, which are often intriguing and architecturally pleasing due to their circular shapes and massive scale’ 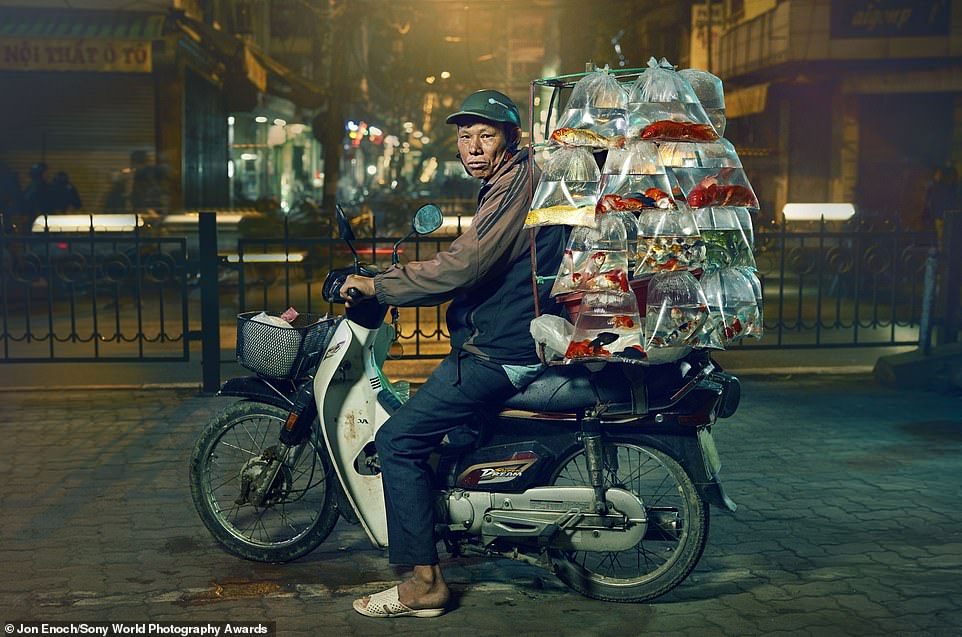 Shortlisted in the portraiture category is Jon Enoch from the United Kingdom for his images showing delivery drivers on the streets of Hanoi, Vietnam. He snapped this picture of a scooter driver with a delivery of pet fish. Jon said: ‘The riders have an amazing ability to transport all wonder of goods in amazing quantities. I spent a week chasing down amazing looking riders and their cargos and convincing them to pose for the camera’ 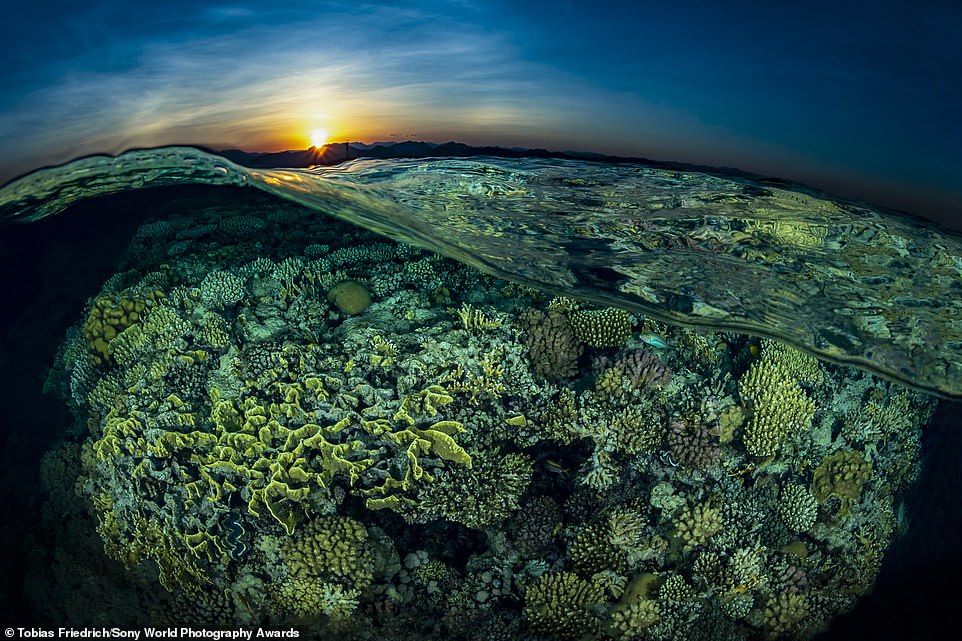 Tobias Friedrich, from Germany, captured this stunning coral reef picture during a sunset in Egypt for his series called Below Surface, which is shortlisted in the natural world and wildlife category 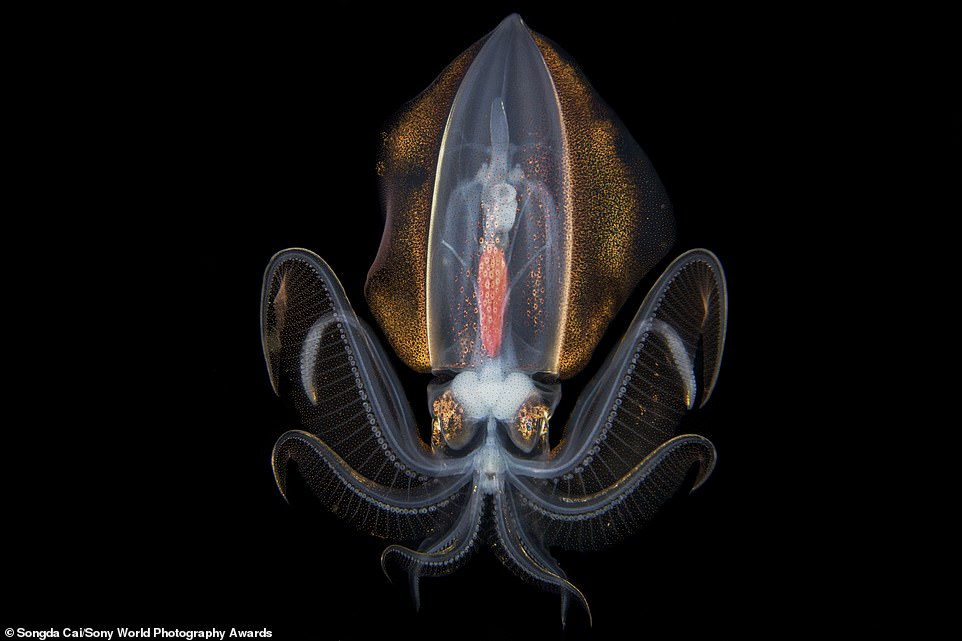 A colourful diamond squid captured by Chinese photographer Songda Cai in the waters of Anilao Bay in the Philippines. He is shortlisted in the natural world and wildlife category. He said: ‘After trying with all the different compositions and poses, it offered me this very symmetrical photo with all the tentacles extended, as if it’s trying to show off its beautiful tripes and chromatophores’ 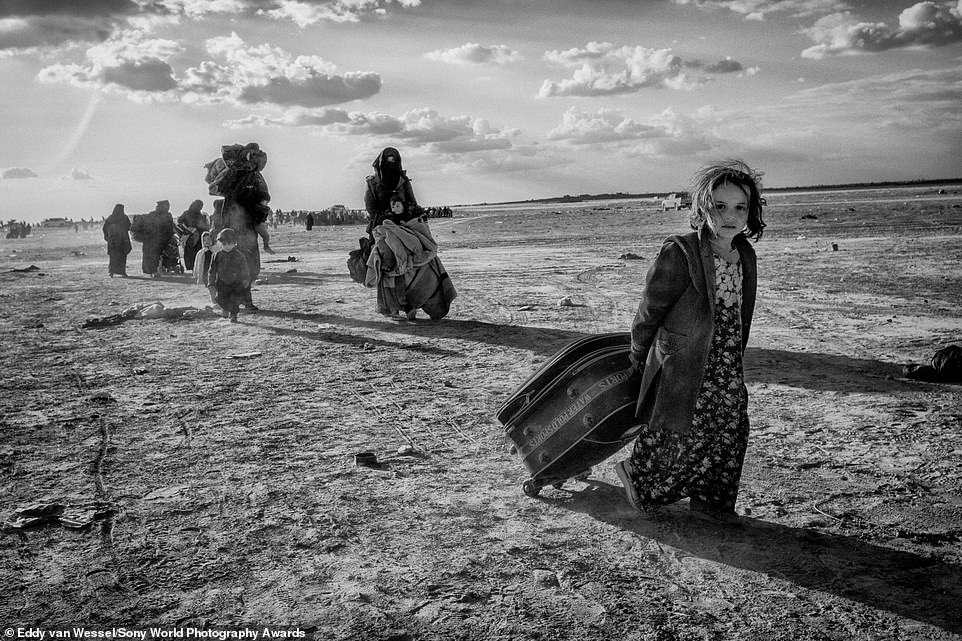 Eddy van Wessel, from the Netherlands, is shortlisted in the documentary category for his series shot in March 2019 of families living in the last ISIS stronghold of Baghuz in Syria. His image shows people trying to escape Baghuz, heading towards the desert. He said: ‘The remaining ISIS families in town found themselves caught between the front lines, leaving few options for escape’ 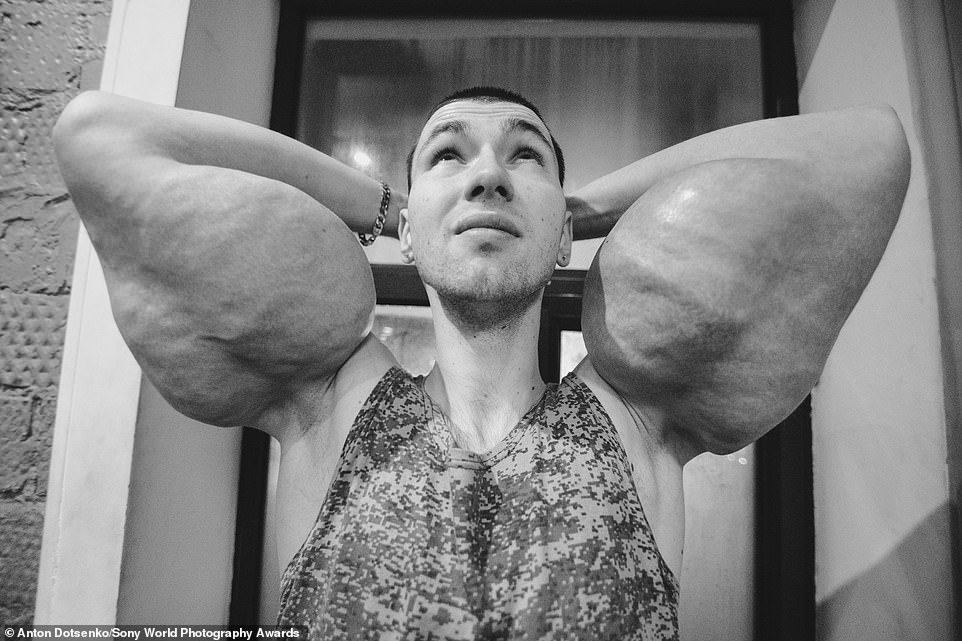 Shortlisted in the sport category is American photographer Anton Dotsenko for his series on bigorexia, also known as muscle dysmorphia. He said: ‘This anxiety disorder causes individuals to believe that their bodies are small and lacking in muscle, despite the fact that many sufferers could be described as big and muscular. Sufferers choose different approaches to build up muscles, from compulsively working out in the gym to injecting themselves with mystery substances. Some of these methods are dangerous, and occasionally deadly’ 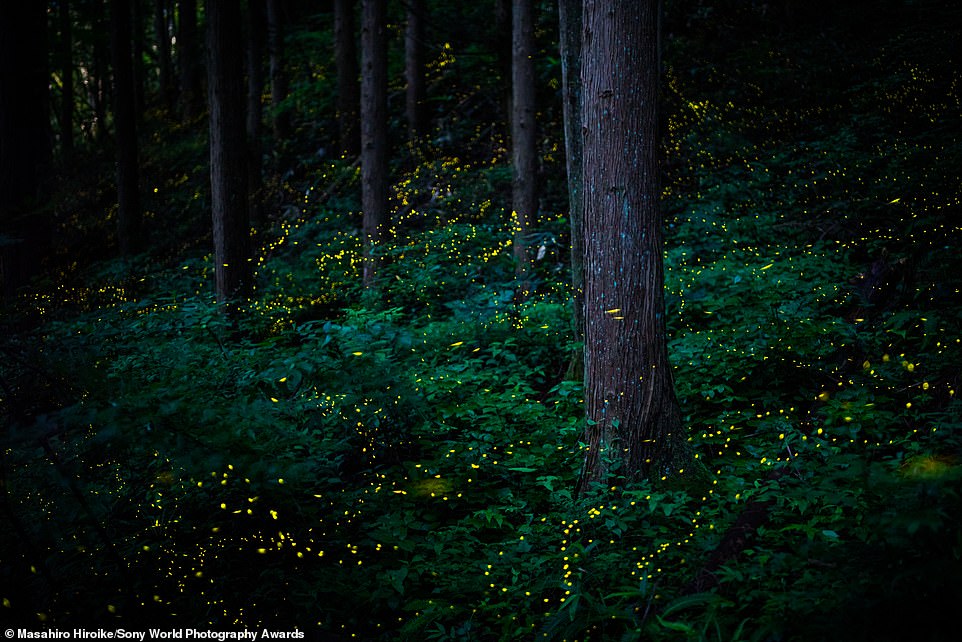 Japanese photographer Marashiro Hiroike is a finalist in the natural world and wildlife category for a portfolio of work showing fireflies in the forests of Tottori, Japan. This image was snapped in the mountains 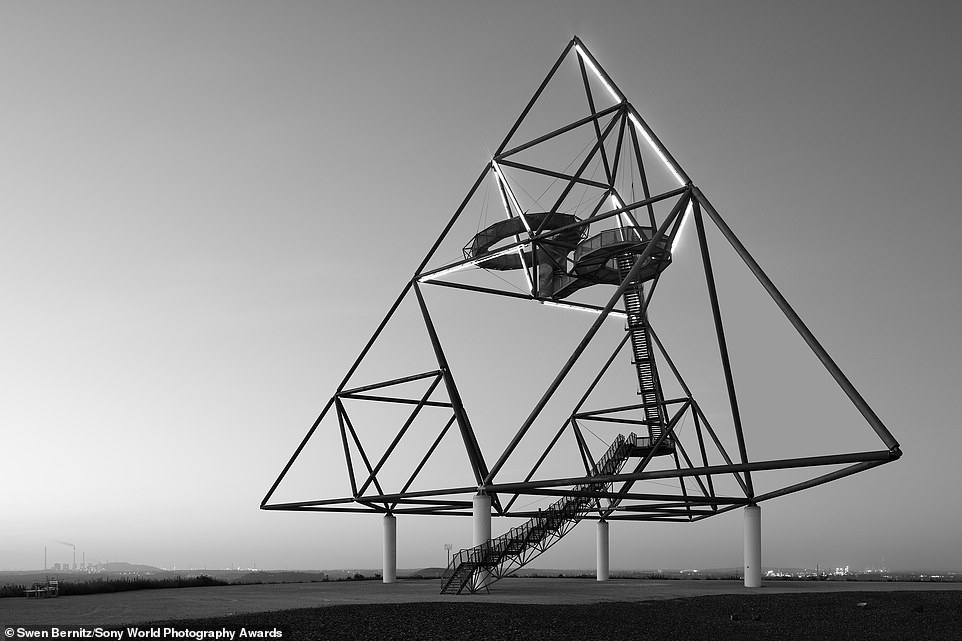 German photographer Swen Bernitz is shortlisted in the architecture category with this image. It shows a former mining dump in the city of Bottrop, Germany. He said: ‘Through the erection of a number of art installations, some of these piles of slag and rubble have become unlikely tourist attractions. As such, they have been photographed many times’ 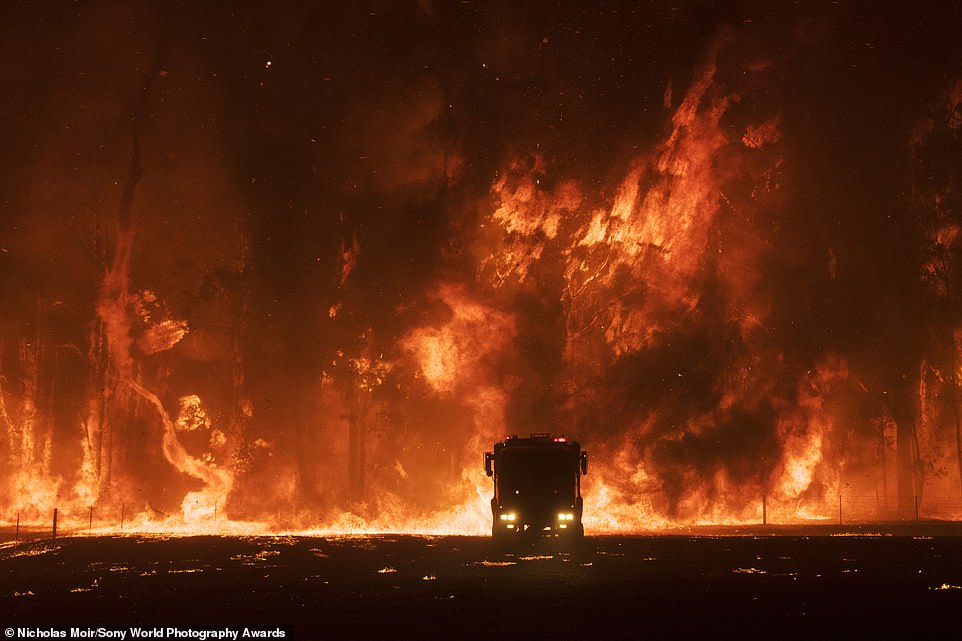 A lone fire truck stands next to a wall of flames caused by a bushfire in south-east Australia. The image was captured by Australian photographer Nicholas Moir, who is shortlisted in the documentary category