The Himalayan helicopter rescue scam: Hikers are being pressurised into evacuations for illnesses as minor as a cold so scammers can claim thousands from insurance companies

Tourists hiking in Nepal’s Himalayan mountains are being pressured into costly helicopter evacuations at the first sight of trouble by guides linked to powerful brokers who are making a fortune on ‘unnecessary rescues’, industry insiders say.

Dodgy operators are scamming tens of thousands of pounds from insurance companies by making multiple claims for a single chopper ride or pushing trekkers to accept airlifts for minor illnesses, an investigation has revealed.

It also found evidence of guides putting baking soda, which acts as a laxative, in food to give tourists diarrhoea and then pressuring them to be airlifted. 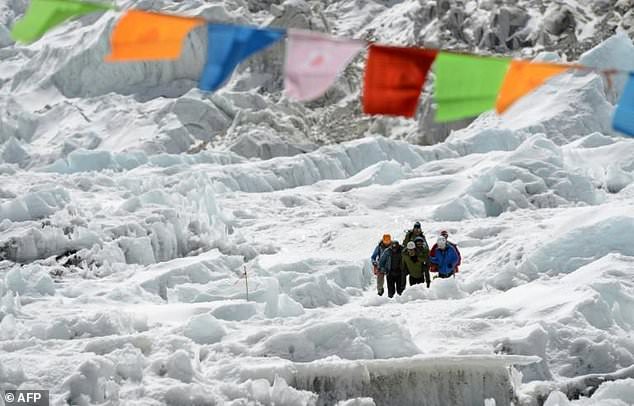 A group of tourists trekking in the Himalays. Industry insiders say they are being pressured into costly helicopter evacuations at the first sight of trouble by guides linked to powerful brokers who are making a fortune on ‘unnecessary rescues’

In other cases, trekking guides, promised commission if they get tourists to return by chopper, are offering helicopter rides to tired hikers as a quick way home, but billing them as rescues to insurance companies.

The practice is so rampant helicopter pilots are reporting ‘rescuing’ tourists who appear in perfectly fine health.

Trekking outfits stand to make more in kickbacks from evacuating a hiker by helicopter than the cost of the trek itself, contributing to an alarming rise in rescues from Nepal’s biggest tourist attraction: the fabled Himalayas.

One manager of a Kathmandu-based helicopter company said it paid $500 to brokers for each rescue flight.

‘If we don’t pay the commission, we can’t get the business,’ the manager told AFP on condition of anonymity.

UK-based Traveller Assist said 2017 was the most expensive year on record for travel insurance companies covering tourists in Nepal due to a startling number of helicopter rescues – though this year is on track to beat it.

Jonathan Bancroft of Traveller Assist, which carries out medical evacuations in Nepal on behalf of global travel insurance companies, said: ‘It’s a racket that’s tantamount to fraud, and it’s happening on a large scale throughout Nepal.’ 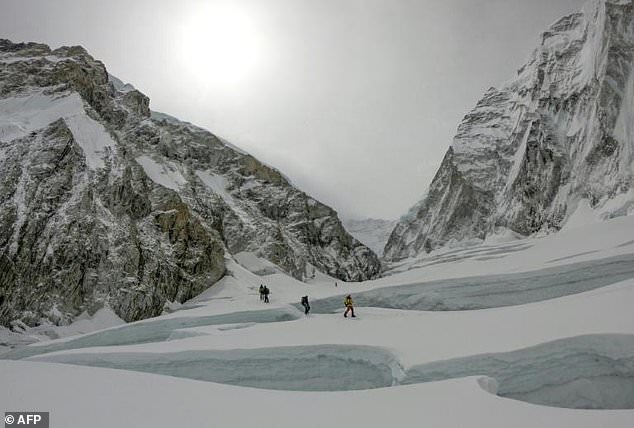 There is no centralised dispatch centre for helicopter flights in Nepal making it difficult to know precisely how many evacuations are carried out.

But over the past six years the skies of the Everest region have turned into a helicopter highway, with a six-fold increase in the number of choppers in the air, each logging over 1,000 flying hours per year, according to industry data.

Thanishwar Bhandari, who works at a small clinic in the Everest region, said: ‘We used to see maybe one helicopter in two or three days. Now we are seeing 10 or so in a day.

TREKKER CLAIMS SHE WAS EVACUATED DUE TO COMMON COLD

Australian trekker Jessica Reeves was urged by her guide to be evacuated by helicopter from near Everest base camp in October 2017 when she complained of a common cold.

‘He kept telling me to get a helicopter,’ Reeves told AFP.

‘They said if I keep going it would be really risky so it was better to leave now instead of risking it.’

She said nine or 10 hikers in her group ended up returning to Kathmandu on three helicopters but were instructed to say they were alone on the flight back.

She alleged the company, Himalayan Social Journey, billed each of the tourists’ insurance providers for the whole flight – pocketing around $35,000 in the process.

‘They told us all to lie to the insurance company and say there was only one person on the helicopter when there were three or four of us on each,’ she claimed. Reeves’ insurance claim was in any case rejected because her policy had expired.

The company owner, Ram Sapkota, denied that the insurance companies were each billed for the full flight.

‘(They) claimed insurance on a sharing basis and we received money from (the) insurance,’ he said, dismissing allegations as ‘fake’.

Sapkota blamed the rise in helicopter rescues from the Himalayas on lazy hikers and hypochondriacs.

‘When one client gets sick, then the group they say “I feel unsafe and just want to go'”,’ he said.

Meanwhile, one foreign pilot, who requested anonymity, said he rescued trekkers on a near daily basis in April and May this year, peak trekking season.

‘I think I took three people the whole season who appeared genuinely ill,’ he told AFP.

Australian trekker Jessica Reeves also told how she was urged by her guide to be evacuated by helicopter from near Everest base camp in October 2017 when she complained of just a common cold.

Some hospitals in Kathmandu also have a stake in the rescue business. Company registration documents reviewed by AFP show that many large trekking outfits have financial ties to hospitals and helicopter providers, creating a conflict of interest.

Ram Sapkota of Himalayan Social Journey said his guides received a commission from some hospitals if they take a tourist there, saying he allowed it because his company needed to ‘maintain relations’ with medical providers.

A German trekker hiking in the Everest region in April told AFP that a broker offered him a return helicopter flight to Kathmandu – with the cost billed to his insurance provider.

‘He said he knew a doctor who would sign it off as a rescue,’ the tourist said, requesting anonymity.

The majority of rescues in the Himalayas are related to ‘acute mountain sickness’ caused by low oxygen levels at high altitude.

The symptoms are vague – headaches, nausea, loss of appetite – and the only treatment is to descend.

But once the patient is at lower altitudes the symptoms disappear, making it impossible to tell if the evacuation was medically necessary.

International insurance companies are beginning to wise up to the rampant fraud.

And now these firms have set a September 1 deadline for Nepal to clamp down on fraudulent helicopter rescues of tourists or they will stop giving cover, industry sources say.

Insurers have demanded all helicopter rescues are pre-approved and capped at $4,000 per flight. 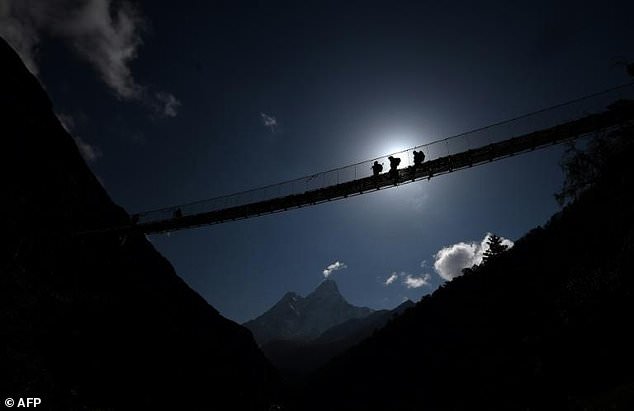 There are an estimated 2,000 trekking companies in Nepal promising to whisk tourists into the Himalayas, but many are unlicensed, operating from scruffy, cramped offices in the dusty backstreets of Kathmandu

They also want an inquiry into business permits after it emerged that some trekking outfits, charter companies and helicopter owners were operating with forged documents.

The fraud became so acute that Nepal’s government, which relies heavily on tourism, launched its own probe in June in a bid to keep insurers from pulling out altogether.

It investigated 36 trekking companies, 10 helicopter companies and six hospitals, finding there had been more than 1,300 helicopter rescues in the first five months of the year, costing insurers over $6.5 million.

But Danny Kaine of Traveller Assist said the probe was a ‘PR exercise’.

‘I don’t believe that the ministry has run an investigation of this scale before and I think they are under quite a lot of pressure to show that they are doing something about the fraud,’ he explained.

And other industry insiders have warned that the investigation has only revealed the tip of the iceberg, amid allegations that some businesses pressured the ministry to look the other way. 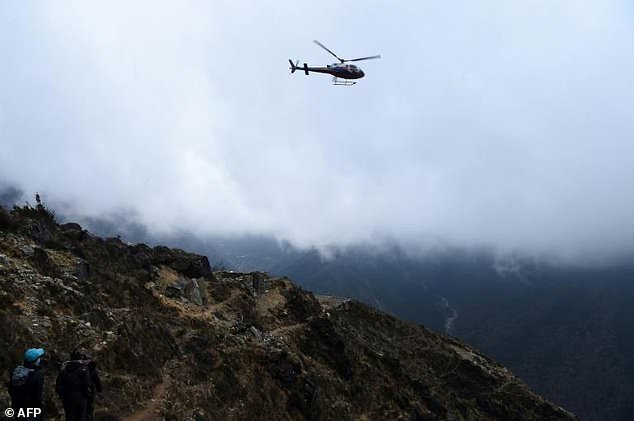 Insurance firms have set a September 1 deadline for Nepal to clamp down on fraudulent helicopter rescues of tourists or they will stop giving cover, industry sources say 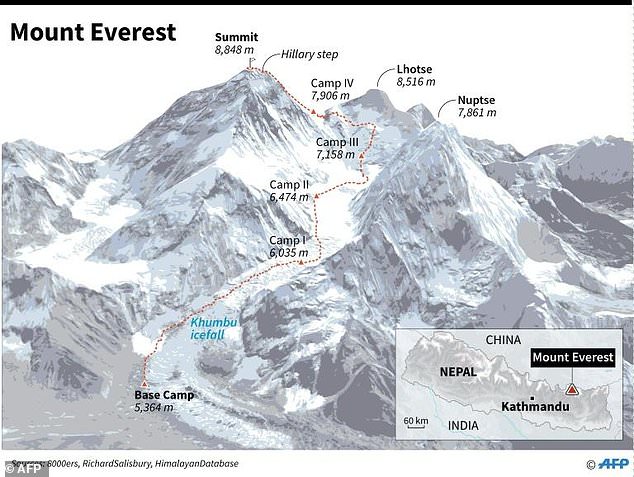 The cost of the 14-day trek to Everest base camp varies wildly between the outfits, but many offer the tour for less than $1,000, below cost price according to multiple industry sources

‘I know that there are some companies that are involved in the fraud that they haven’t even spoken to,’ a source close to the investigation told AFP.

A mass pull out by the insurers would seriously dent Nepal’s vital tourism industry, which the government is banking on to revive the economy.

Ministers have set an ambitious goal of attracting two million tourists a year by 2020 – double the number who visited last year.

There are an estimated 2,000 trekking companies promising to whisk them off into the mountains, many of them operating from scruffy, cramped offices in the dusty backstreets of Kathmandu.

The cost of the 14-day trek to Everest base camp varies wildly between the outfits, but many offer the tour for less than $1,000, below cost price according to multiple industry sources.