Revealed: Emilia-Romagna in Italy, Spain’s Cantabria and DUNDEE are among Lonely Planet’s top 10 places to visit in Europe in 2018

The Italian region of Emilia-Romagna is the best place to visit in Europe for 2018, according to a prestigious travel guide.

It saw off competition from destinations across Spain including Cantabria which came second, the UK, France and Greece to top Lonely Planet’s Best in Europe list for 2018.

And a surprising entry on the list is Scottish city of Dundee, which was lauded for its growing cultural scene and exciting transformation of its historic waterfront. 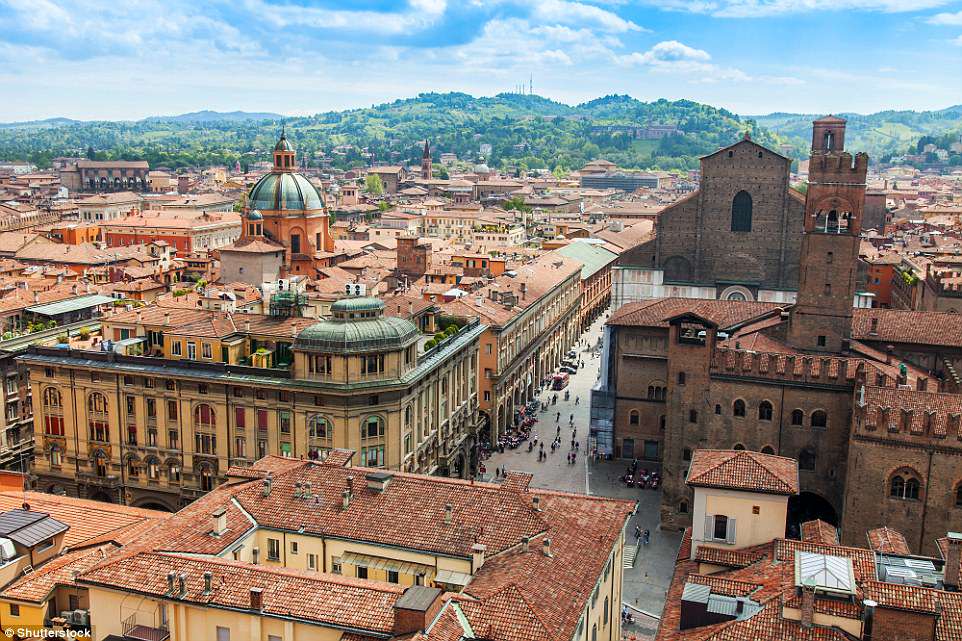 An aerial view of the historic centre of Bologna, which is in the Italian region of Emilia-Romagna. It has been named as the best place to visit in Europe for 2018 by Lonely Planet

Lonely Planet’s Best in Europe is compiled annually by the travel company’s European experts to reveal their pick of the most exciting and underrated destinations to visit across the continent.

The experts say that this year’s list directly tackles the hot topic of ‘overtourism’, ‘aiming to inspire travellers to discover some of the best lesser-visited regions, alternative city breaks and hidden gems, beyond Europe’s busiest tourist hotspots’.

Emilia-Romagna came out on top despite often being overlooked in favour of Italian favourites Tuscany, Campania and The Veneto.

Judges said the area, which includes the city of Bologna, is increasingly carving out a reputation as the nation’s number one destination for food lovers. 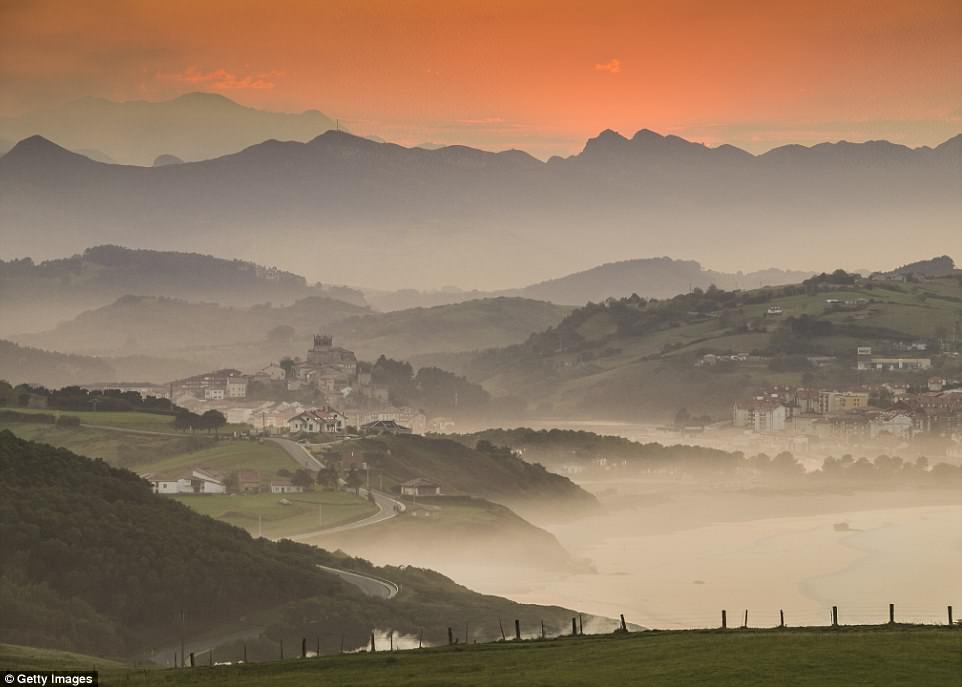 Second on the list is Cantabria, an autonomous region on Spain’s northern coast home to the city of Santander. Pictured are tiny villages across the mountains 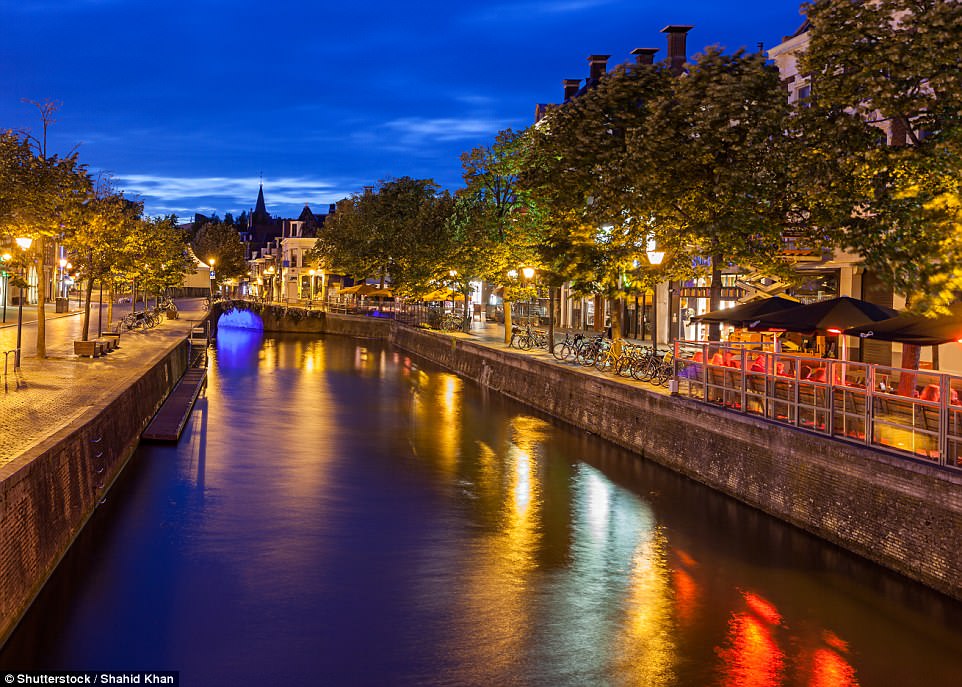 Friesland in the Netherlands, pictured,  is third, with Lonely Planet describing it as ‘a region of beguiling landscapes and a lively capital city 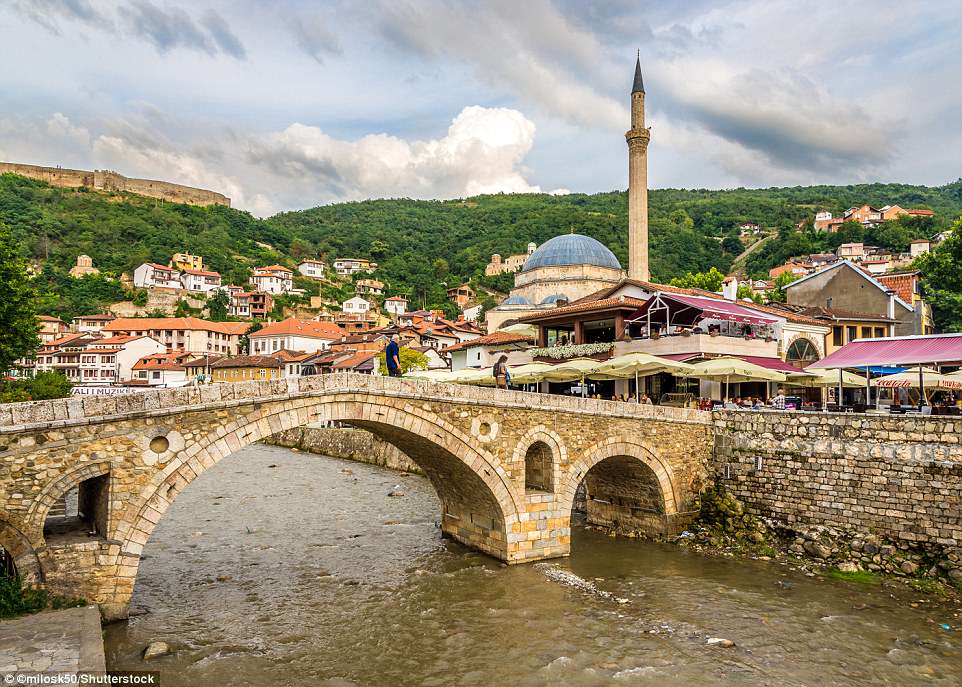 A surprise entry on to the list in fourth place is the newly created state of Kosovo. Experts say it boasts dramatic hiking trails, Ottoman-era history and a growing cultural scene 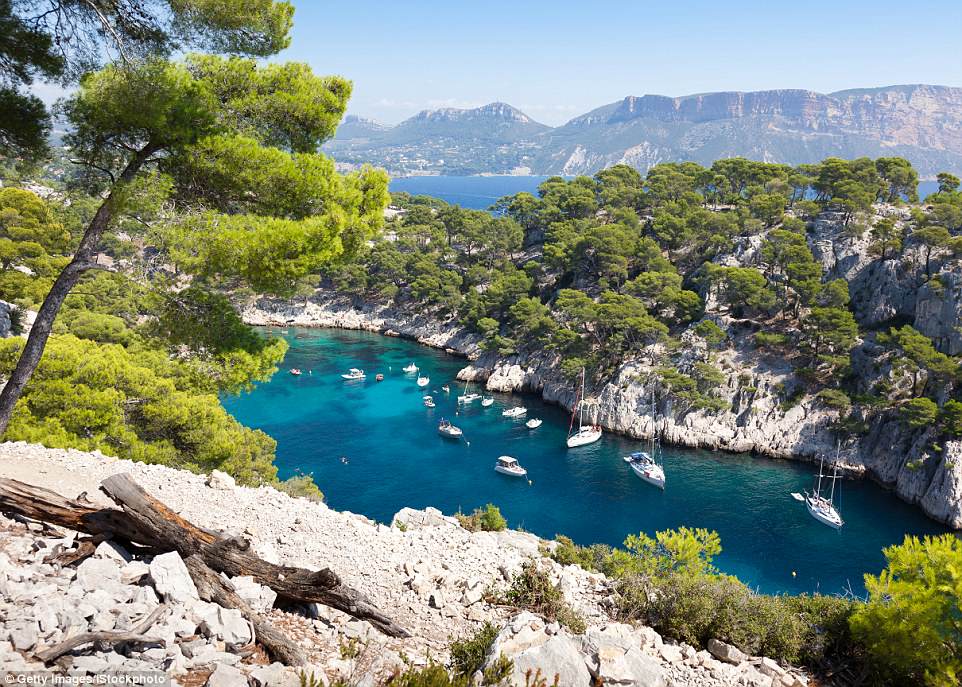 Rounding off the top five is the Provence region of France, which is best know for its olive groves and lavender fields. Pictured is the Port of Pin in Cassis in France

It is the birthplace of Ragu, prosciutto di Parma, balsamic vinegar and Parmesan cheese.

The experts noted that the area’s foodie legacy can be explored at Bologna’s newly opened FICO, the world’s largest culinary theme park, while new cultural openings in the cities of Ferrara and Rimini provide more for visitors to get their teeth into.

Coming in second is Cantabria, an autonomous region on Spain’s northern coast home to the city of Santander.

The area was praised for its ‘land of wild, sandy beaches, mist-shrouded moutains and enchanting villages.’

Friesland in the Netherlands is third, with Lonely Planet describing it as ‘a region of beguiling landscapes and a lively capital city that is this year’s European Capital of Culture.’ 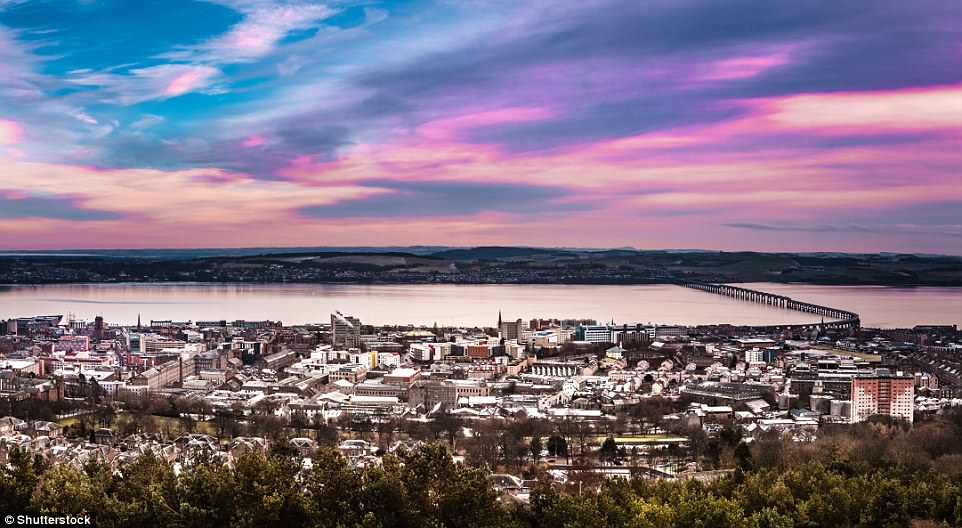 Dundee, pictured, entered the list in sixth with Scotland’s fourth largest city being praised for its ‘head turning’ urban redevelopment 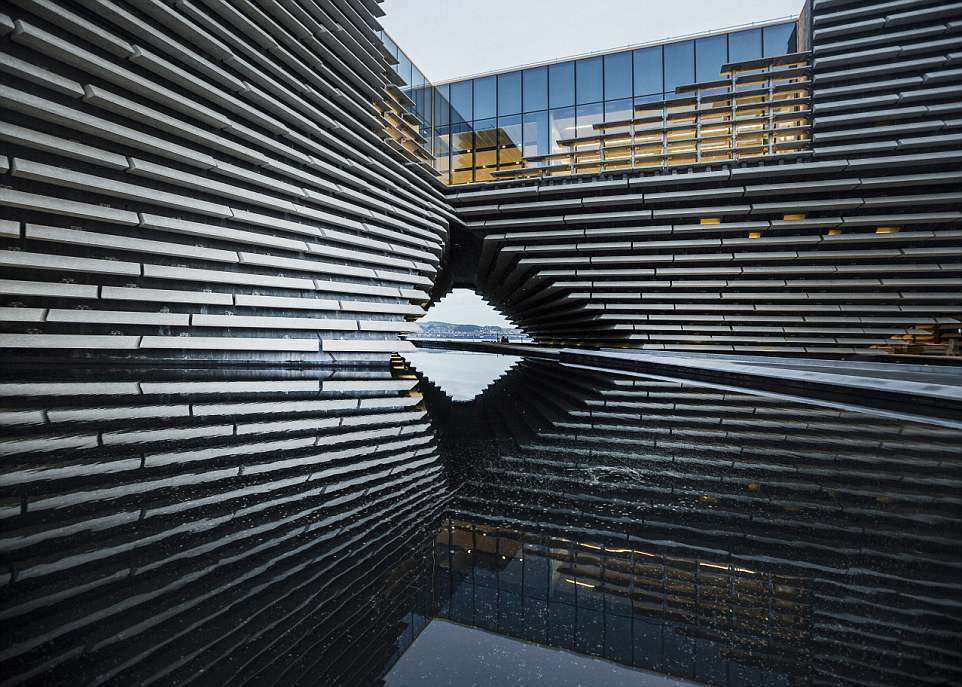 Dundee is set to open the newest branch of the V&A museum, pictured, in September on the banks of the River Tay

Coming in fourth is the tiny state of Kosovo, a young nation that experts say boasts dramatic hiking trails, Ottoman-era history and a growing cultural scene.

Rounding off the top five is the Provence region of France, which is best know for its olive groves and lavender fields.

Meanwhile Dundee entered the list in sixth with Scotland’s fourth largest city being praised for its ‘head turning’ urban redevelopment, which is being spearheaded by the opening of the newest branch of the V&A museum in September.

Describing the city, Lonely Planet’s writers praised a creative scene in Dundee that ‘increasingly attracts some of the UK’s most visionary talent’, building on its selection by Unesco as the UK’s first City of Design in 2014. 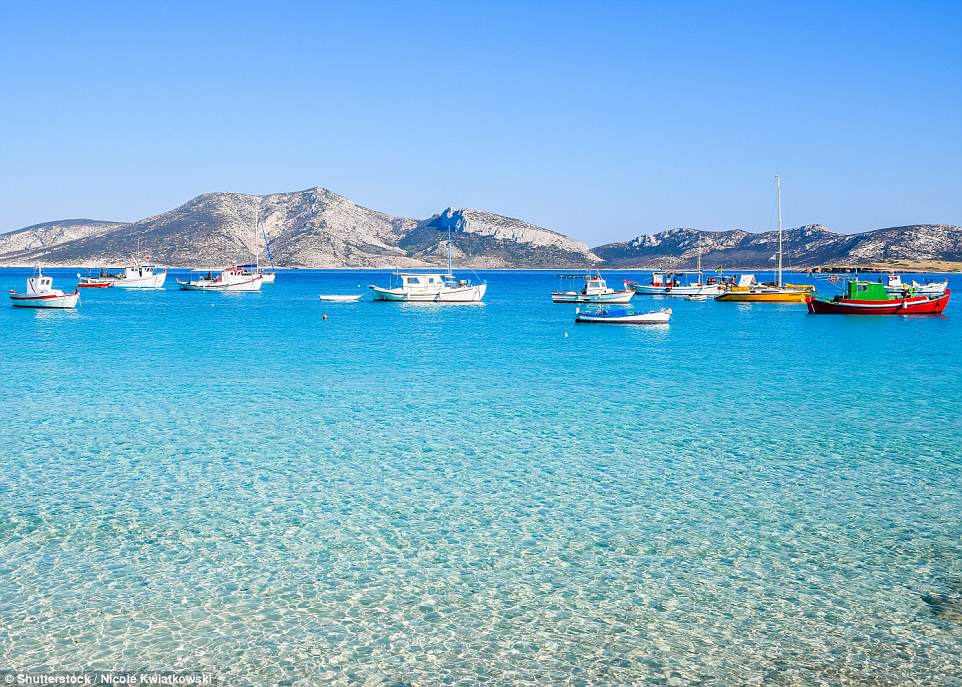 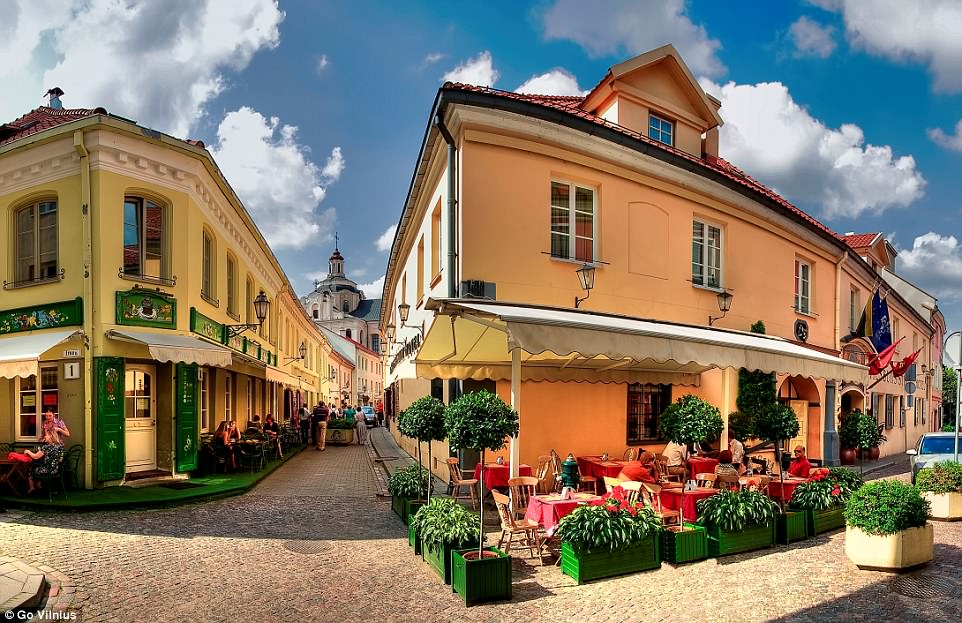 The colourful buildings and the narrow cobbled streets of the Lithunia capital Vilnius, which came eighth on Lonely Planet’s list

Lonely Planet’s editorial director, Tom Hall said: ‘While visitors have always been assured of a friendly welcome, Dundee has often been overlooked by travellers to Scotland, but that should be set to change.

‘The opening of V&A Dundee is a really exciting moment that marks the city out as well worth a visit, but throw in nationally important museums and attractions, and its dynamic, creative spirit, and travellers will find a city boasting plenty to discover.’

Rounding off the top ten is the Small Cyclades islands in Greece, which includes Mykonos and Santorini, Lithuania capital Vilnius, the Vipava Valley in Slovenia and the capital of Albania, Tirana. 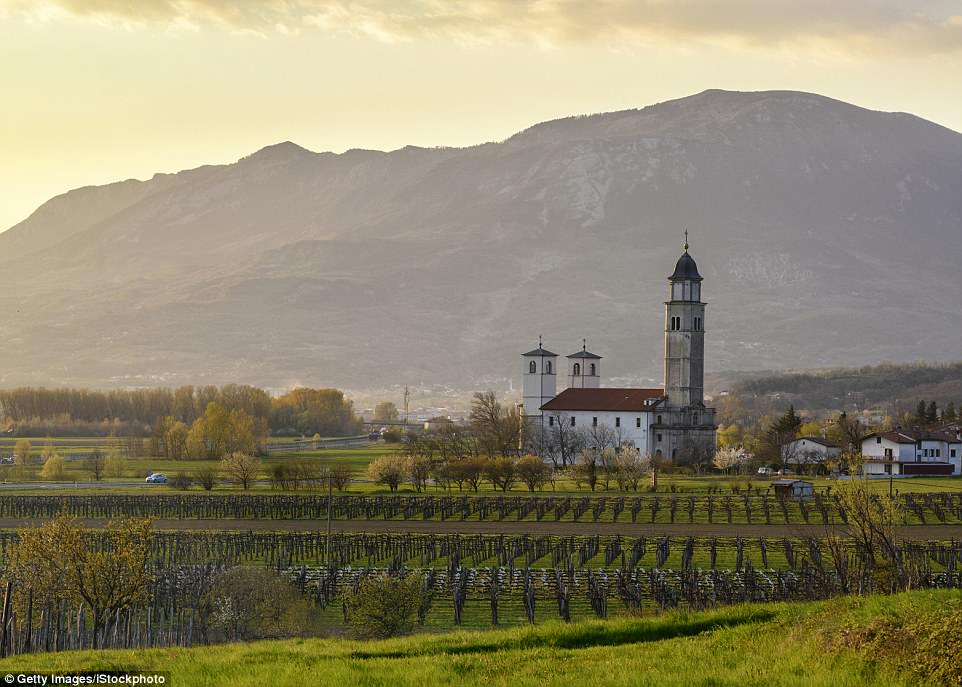 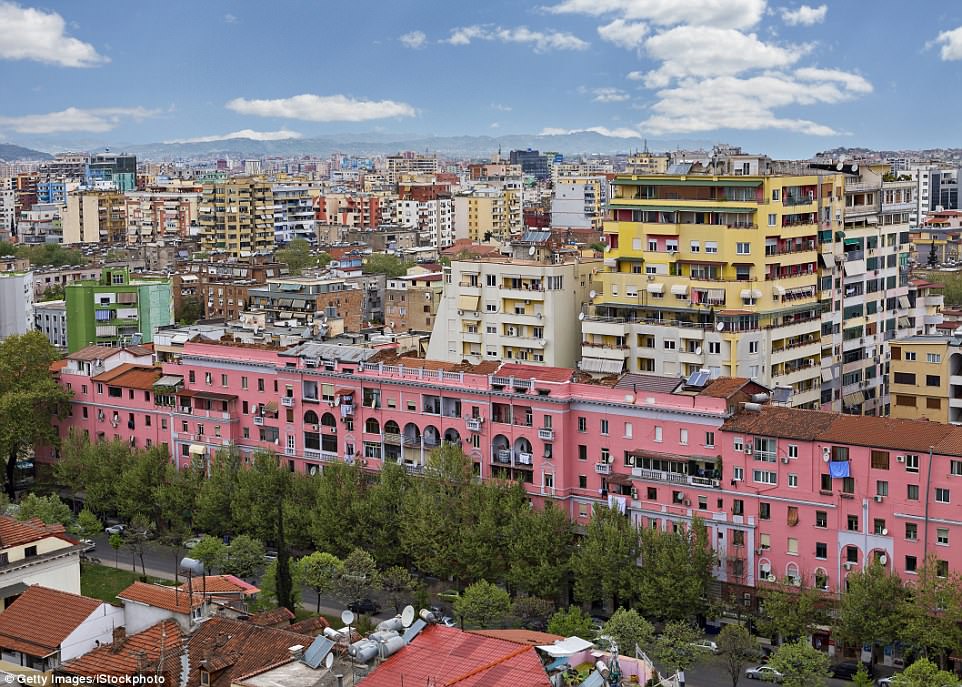 Rounding off Lonely Planet’s list in 10th spot is Tirana, the capital of Albania known for its colourful Ottoman and Soviet-era architecture 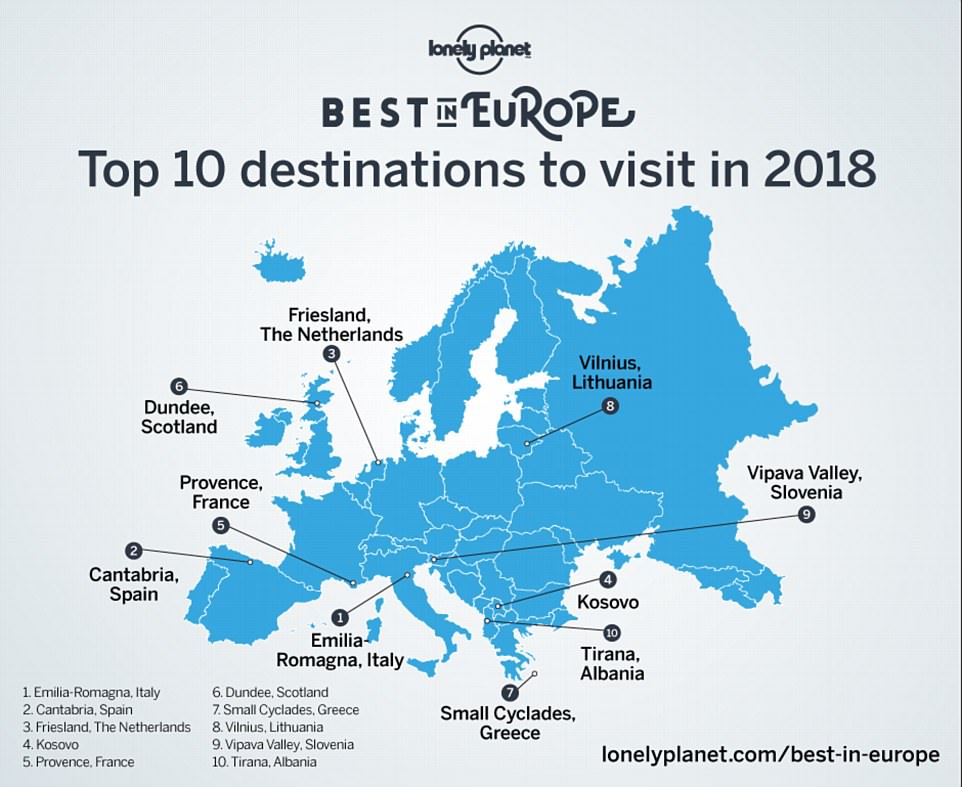 Mr Hall added: ‘There is growing concern over the increase in tourism to popular European destinations, particularly over the busy summer months, so with this list we wanted to show that there are a wealth of incredible alternatives to discover across Europe.

‘Our expert writers cross the continent and have uncovered some of Europe’s most outstanding, underrated and overlooked places that are well worth planning a trip around.’

‘Whether you’re looking for a cultural city break, spectacular scenery or a buzzing foodie destination, there is something for every taste.

‘You can find all of these things in Italy’s Emilia-Romagna region, which flies under the radar compared to some of Italy’s bigger hitting destinations, while the other picks showcase some of the places that in-the-know European travellers are excited about right now.’

It was once famed for jam, jute and journalism.

But now Dundee has has transformed into a home to some of the country’s most exciting examples of design, innovation and culture.

Here are some places to visit on a trip to the city: 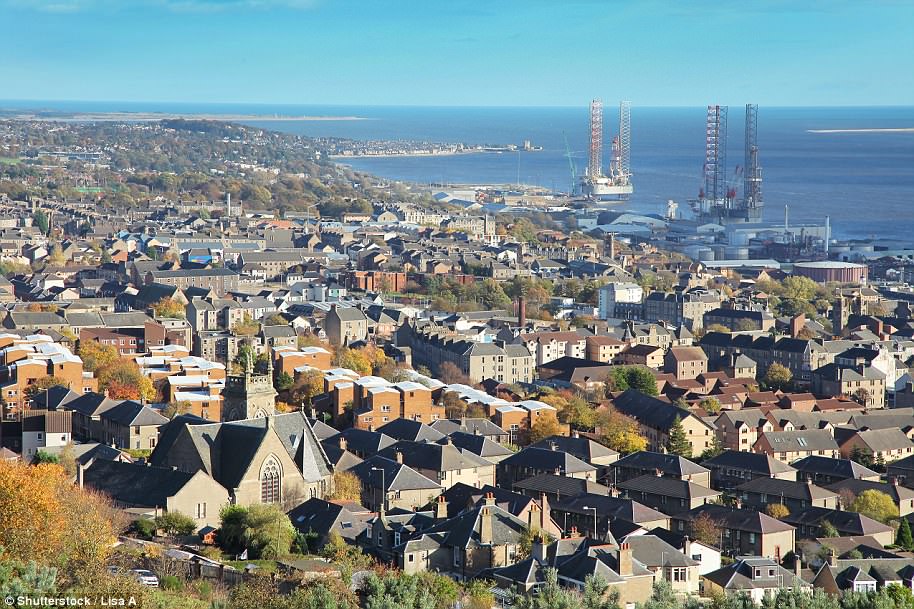 Dundee has has transformed into a home to some of the country’s most exciting examples of design, innovation and culture

Dundee cultural credentials increased when the city was named as the home of the only other V&A museum in the world outside of London. Set to open on September 15, the Kengo Kuma-designed attraction will be the jewel in the crown of the city’s tourism offering and provide an introduction to over 500 years of brilliance, ingenuity and achievement in Scottish creativity and the best examples of design from around the world.

A feast for foodies

No trip to Dundee is complete without trying an authentic Dundee pie or ‘peh’ at a local butchers such as Scott Brothers or a slice of the iconic Dundee cake. This bakery favourite is still lovingly created at bakers like Clarks’ Bakery or Goodfellow & Stevens. 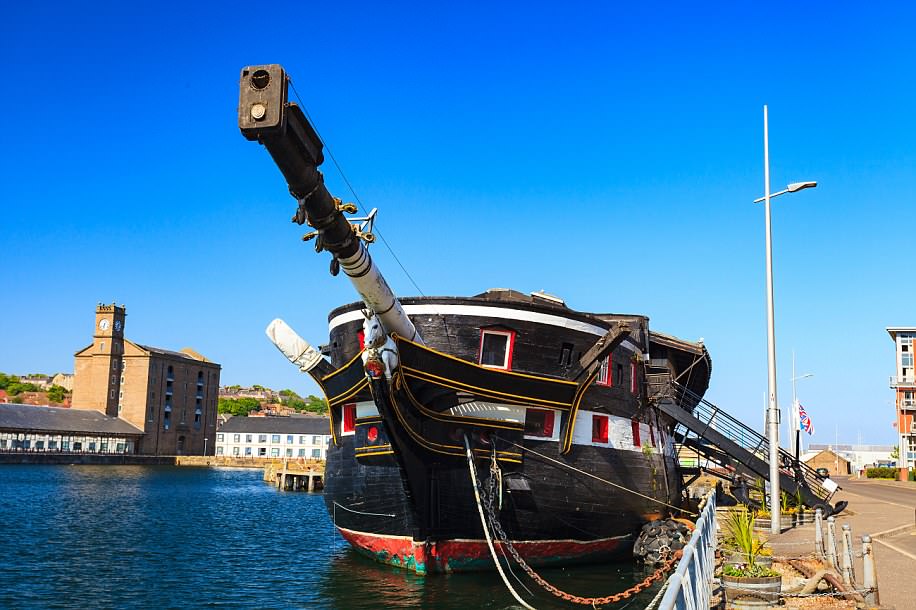 The HMS Frigate in Dundee’s waterfront. Dundee is also the birthplace of the Beano – Britain’s longest running children’s comic published by DC Thomson

Dundee is the birthplace of the Beano – Britain’s longest running children’s comic published by DC Thomson. Every week, children and adults across the world can follow the antics of legendary characters like Dennis the Menace.. Read an issue of The Beano Comic on the newly named Bash Street or check out the city’s best-loved comic characters, like Desperate Dan and Minnie the Minx in statue form.

A city built on design

Dundee was in competition with 50 other global cities to join the City of Design network in 2014. It was named the UK’s first City of Design by the United Nations for the diverse design innovations. Dundee’s contributions to the world, include aspirin, biomedical research which has led to hundreds of new cancer drugs, comics including the Beano and Dandy, orange marmalade, and video games including Lemmings and Grand Theft Auto.