Photos and video footage from Southwest Airlines Flight 1380 indicate that many passengers were not wearing their oxygen masks properly ― a problem that suggests a real lack of airplane safety knowledge among fliers.

On Tuesday, the Southwest plane had to make an emergency landing after an engine explosion caused a window to break. One passenger, later identified as Jennifer Riordan, was reportedly sucked toward the broken window. She was hospitalized after landing and later confirmed dead.

“PEOPLE: Listen to your flight attendants! ALMOST EVERYONE in this photo from @SouthwestAir #SWA1380 today is wearing their mask WRONG. Put down the phone, stop with the selfies.. and LISTEN. **Cover your NOSE & MOUTH,” he tweeted.

Other flight attendants made similar comments on Martinez’s Facebook post. Indeed, the instruction of cover your nose and mouth is part of Southwest’s safety demonstration script.

Laurie told HuffPost it’s important that passengers follow this instruction to maintain consciousness in the event that an aircraft cabin loses pressure.

Why You Need An Oxygen Mask

“The oxygen mask is meant to cover your nose and your mouth so that during a decompression ― either rapid or explosive, which is what it sounds like happened on Southwest ― you’re getting enough oxygen while the airplane dives down to a level in which you can breathe without the oxygen mask,” Laurie said.

Rapid or explosive decompression refers to incidents when an aircraft experiences an unplanned drop in cabin pressure at a dangerous rate. While there is a high enough percentage of oxygen in the air at flying altitudes (it remains around 21 percent until about 70,000 feet), the lack of air pressure makes it harder to get enough oxygen with each breath.

An oxygen mask helps plane passengers get the oxygen they need in a low-cabin pressure situation.

What Happens If You Don’t Use Your Mask Properly

Passengers who don’t get the oxygen they need are at risk of passing out from hypoxia. This is a condition in which low amounts of oxygen in the body’s tissues can rapidly lead to symptoms like dizziness, vision problems, mental confusion, and even unconsciousness, brain damage and death. 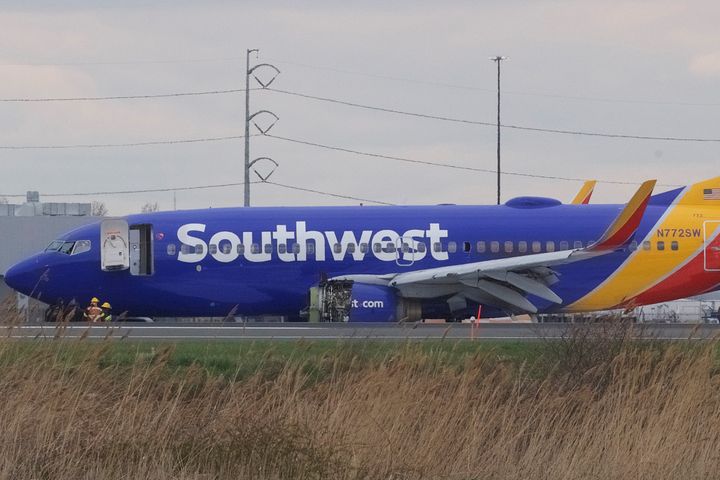 If you don’t use your oxygen mask properly ― by not covering your nose, for instance ― you increase your risk of hypoxia, Laurie explained. “Having it only cover your mouth is kind of like scuba diving in the air,” he added. “You have to remind yourself to breathe through your mouth in order to get enough oxygen until the plane gets down to that level at which you don’t need the mask.”

Southwest declined HuffPost’s request for comment, but in the case of Tuesday’s incident, reports indicate that the broken window caused the cabin to violently depressurize.

“We’ve heard about the passenger being sucked toward the window. All the air gets sucked out of the airplane. So if you have your mouth or nose open, the air is being sucked out, and you won’t be able to breathe because all the air is going away from you,” Laurie told HuffPost. “That’s why you need to wear the mask over your nose and mouth.”

The risk of hypoxia is also why safety demonstrations instruct passengers to secure their own oxygen masks before helping others. “You can pass out from a deprivation of oxygen. Your vision becomes blurry and your judgment becomes cloudy,” he added. “So you won’t be able or conscious to help someone else if you don’t put your mask on first.”

“People don’t realize the mask isn’t stiff or solid. It’s not like a solid cup. It’s actually made out of a flexible plastic material,” he said. “Think of it like a stress ball ― if you were to squeeze the mask, it would elongate to cover your nose and mouth. It doesn’t look like people did that. It looks like they covered their chin and mouth.” 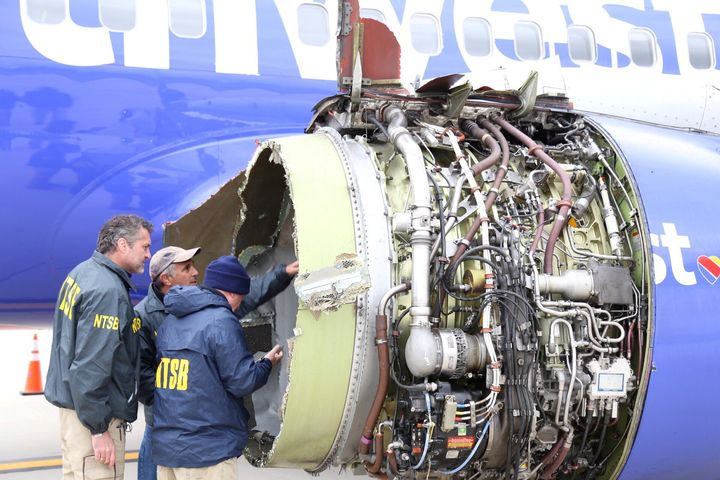 The former flight attendant said he can understand why two people sitting next to each other might secure their masks incorrectly because they’d likely look at each other for confirmation or guidance. But the photo he tweeted told a different story.

“When I saw that picture, what really blew me away is that not only were the two people next to each other doing it wrong, but people behind them did it too,” said Laurie. “It’s like: ‘Where were you during the safety demo? Where’s your safety information card?’”

“Also, if you look you’ll see the instructions are also printed ON the oxygen mask. You get it in all three places,” he added.

Another Way Passengers Are Getting It Wrong

Laurie said oxygen masks aren’t the only thing passengers are getting wrong in emergency situations.

“Another thing that I think gets lost a lot is that when it comes to the evacuation of an airplane and you have to use the emergency slide, a lot of folks straight away go and grab their luggage. Something is wrong with the plane and you need to get off and everyone is like, ‘oh let me grab my bag!’” he said. “What people don’t realize is your bag could puncture the slide. The slide is like a balloon, and if you puncture the slide, you’re trapped on the plane.”

The Problem With Safety Demos

This lack of understanding around airplane safety is, according to Laurie, part of a larger problem in commercial air travel today: People aren’t paying attention to safety demos.

“It’s very hard to get passengers’ attention,” he said. “A lot of airlines have even recognized that and started doing upbeat safety demos and videos. Virgin America has that dance video. Delta did that one with Deltalina. Southwest is known for flight attendants that do jokes and standup comedy and sing and dance during their demos.”

“Everyone’s trying to get your attention because more and more people are tuned out, especially since the use of cellphones has been permitted during taxi,” he added.

“Whether you fly once a week or once a year, if you’re not going to watch the safety video or safety demonstration, it’s important when you sit down in your seat to at least realize that this is something that could happen,” he advised. “And ask yourself ― if it does, ‘what do I do?’ Don’t be so complacent to think that it will never happen to you because the people yesterday didn’t think it was going to happen to them either.”