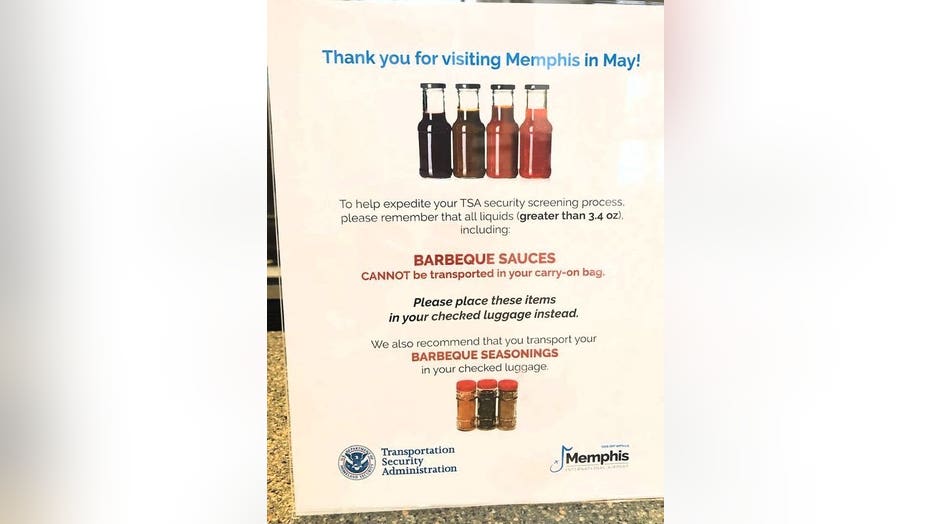 Fox News Flash top headlines for May 15 are here. Check out what’s clicking on Foxnews.com

The Memphis airport is smoking out travelers who attempt to bring barbecue sauces in their carry-on baggage.

Just in time for the city’s annual World Championship Barbecue Cooking Contest, officials at the Memphis International Airport are posting warnings against bringing the tangy condiment through TSA security checkpoints, as many bottles don’t fit the TSA’s 3.4-ounces-or-less requirement. 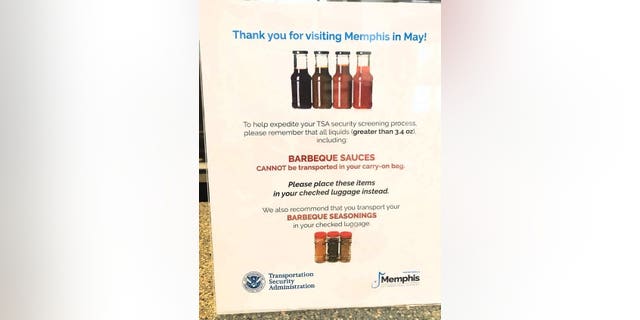 The signs were created by officials at the Memphis International Airport (MEM) based off of feedback from TSA workers.
(Mark Howell/TSA)

“Barbecue sauces CANNOT be transported in your carry-on bag,” read the signs, which have been placed at entrances to at least the B and C Concourse checkpoints, according to TSA spokesperson Mark Howell. “Please place these items in your checked luggage instead.”

Howell added that the signs were created by officials at the Memphis International Airport (MEM) based off of feedback from TSA workers, who see a spike in barbecue-based carry-on violations amid the city’s annual Memphis in May celebrations, which include the 2019 World Championship Barbecue Cooking Contest, running from May 15 through May 18.

“I get questions about [barbecue sauce] every year,” he tells Fox News. “But we don’t ever confiscate it; we’re always going to give everybody the option to go back and check it,” he said. Howell added, however, that lots of travelers end up forfeiting the sauce, as many haven’t given themselves enough time to circle back through the airport.

And just like the sign says, Howell recommended travelers check their dry barbecue rubs to avoid further "sticky situations," as the TSA’s technology may be sensitive when it comes to spices.