After a £43million, 14-month project to fix landslide damage that stranded the Big Sur community, Highway One reopened in July, as beautiful as ever. 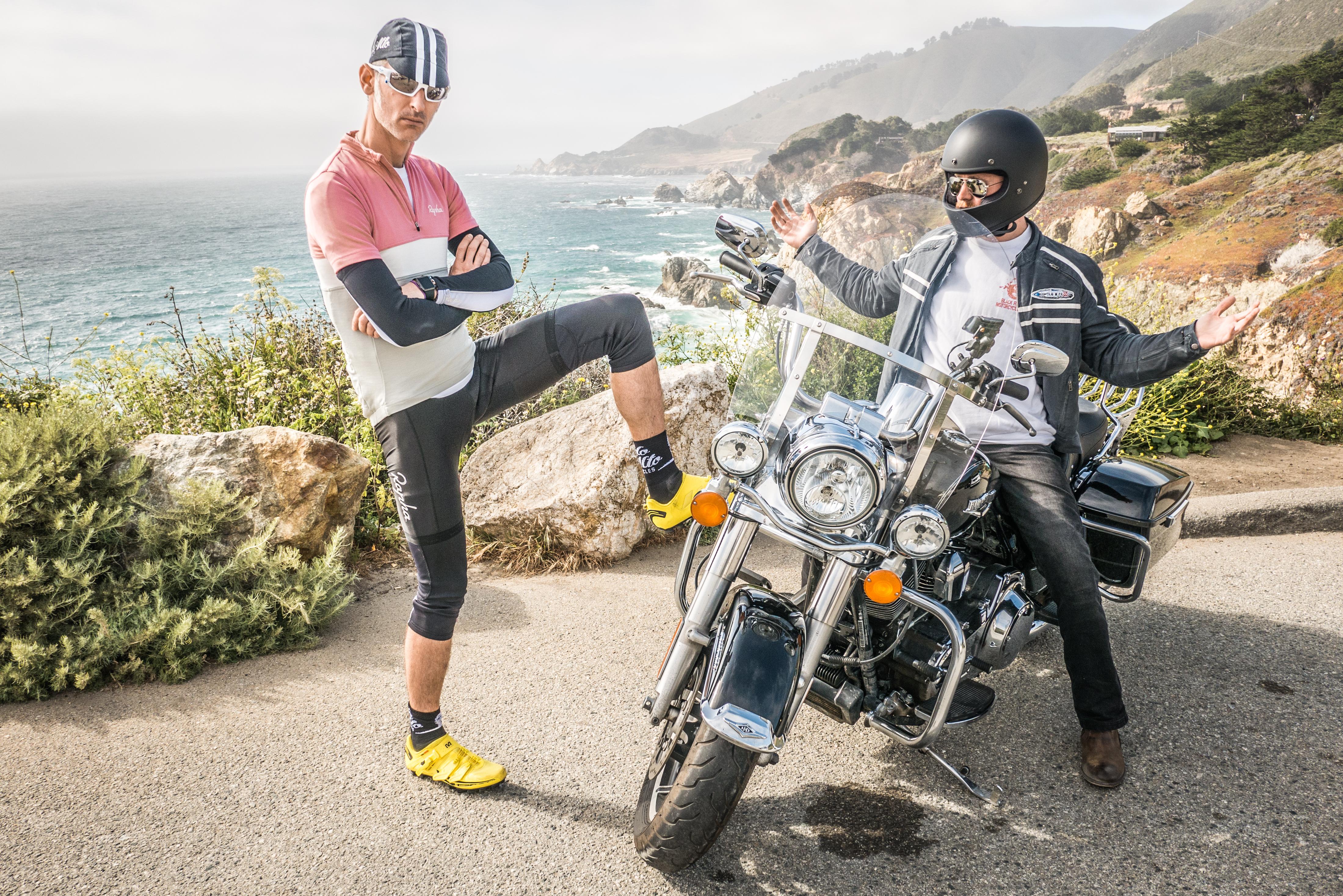 You would have to be mad to tackle it on a bike, mind you. Which brings me on nicely to my colleague Matt. While I was cruising from San Francisco to Los Angeles on a Harley-Davidson Road King, Matt opted to make the 500-mile journey relying on pedal power alone.

With the wind on our faces, we were out to prove there is more to a fly-drive than scenery and a sensible sedan. Why not have a race while we were at it?

Our starting point was the trendy Hotel Zephyr on San Francisco’s Fisherman’s Wharf. Matt didn’t see much of it. He set off at dawn, while I had time for a lie-in and a leisurely ride across the Golden Gate Bridge before rolling out of town. Read his account below.

I realised we wouldn’t see much of each other when I arrived at our first checkpoint, Pebble Beach Golf Resort, fully two hours ahead of him. 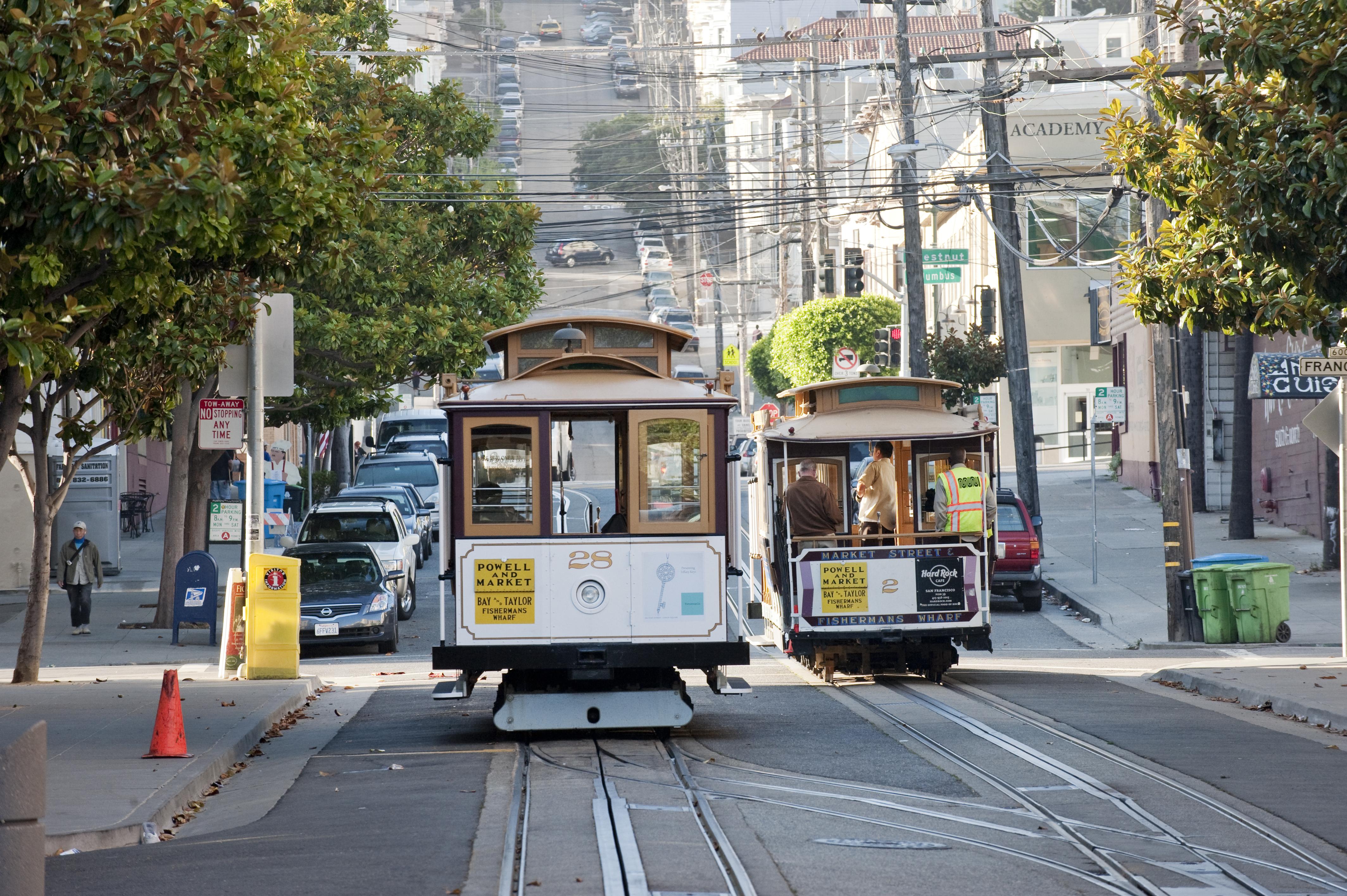 Matt turned up eventually, sweaty and babbling about motorways not mixing with bicycles. By that point I had finished my club sandwich and left him to it while I carried on to Big Sur.

I made slow progress along the 80 miles of rugged wilderness, where the Santa Lucia mountains rise steeply from the Pacific, pulling over every five minutes for another photo of a waterfall or dramatic valley crossing.

In the middle of it all is the Ventana Inn & Spa, a luxury resort where Natalie Portman and Anne Hathaway both tied the knot (not to each other). Unusually for the US, it has a pool where clothing is optional — so I went for a skinny-dip while waiting for Matt.

I was a California raisin by the time he pitched up. Matt insisted I must have scared off the other guests. It was eerily quiet, it has to be said. Day two was a leisurely 150 miles on to the Cottage Inn by the Sea at Pismo Beach, a surfers’ paradise. After a long day in the saddle, an evening tasting Californian wine was a welcome treat. 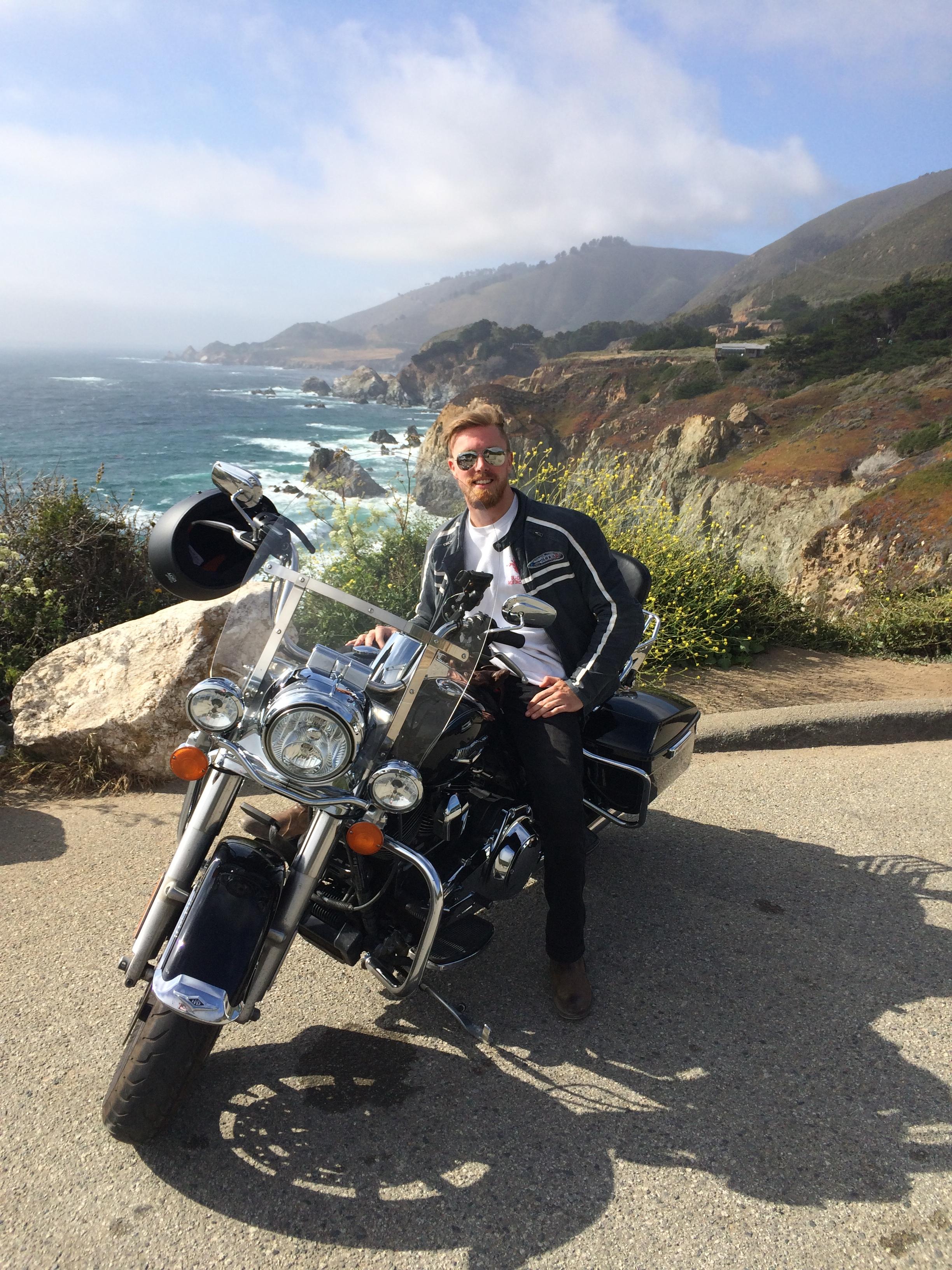 Matt was too tired for that by the time he arrived but at least we both got to stoke up at Surfside Donuts the next day. No day of riding should start without a dozen crispy bacon and maple-glazed rings.

Stomachs stuffed, we made our separate ways to the Harbor View Inn in Santa Barbara, stopping off to appreciate California’s incredible marine life along the way.

I watched a pod of humpback whales feed in a bay from Avila Beach Pier, then pulled over again at San Simeon, where thousands of wild — and very stinky — elephant seals were sunning themselves on the beach. Besides the odd bug in his teeth, Matt didn’t experience much of nature. And I beat him to the hotel yet again.

On our final day, I rode through the winding hills above Malibu and on into LA’s busy traffic. We had agreed to meet at Deus Ex Machina, a surf and motorcycle shop in Venice Beach. 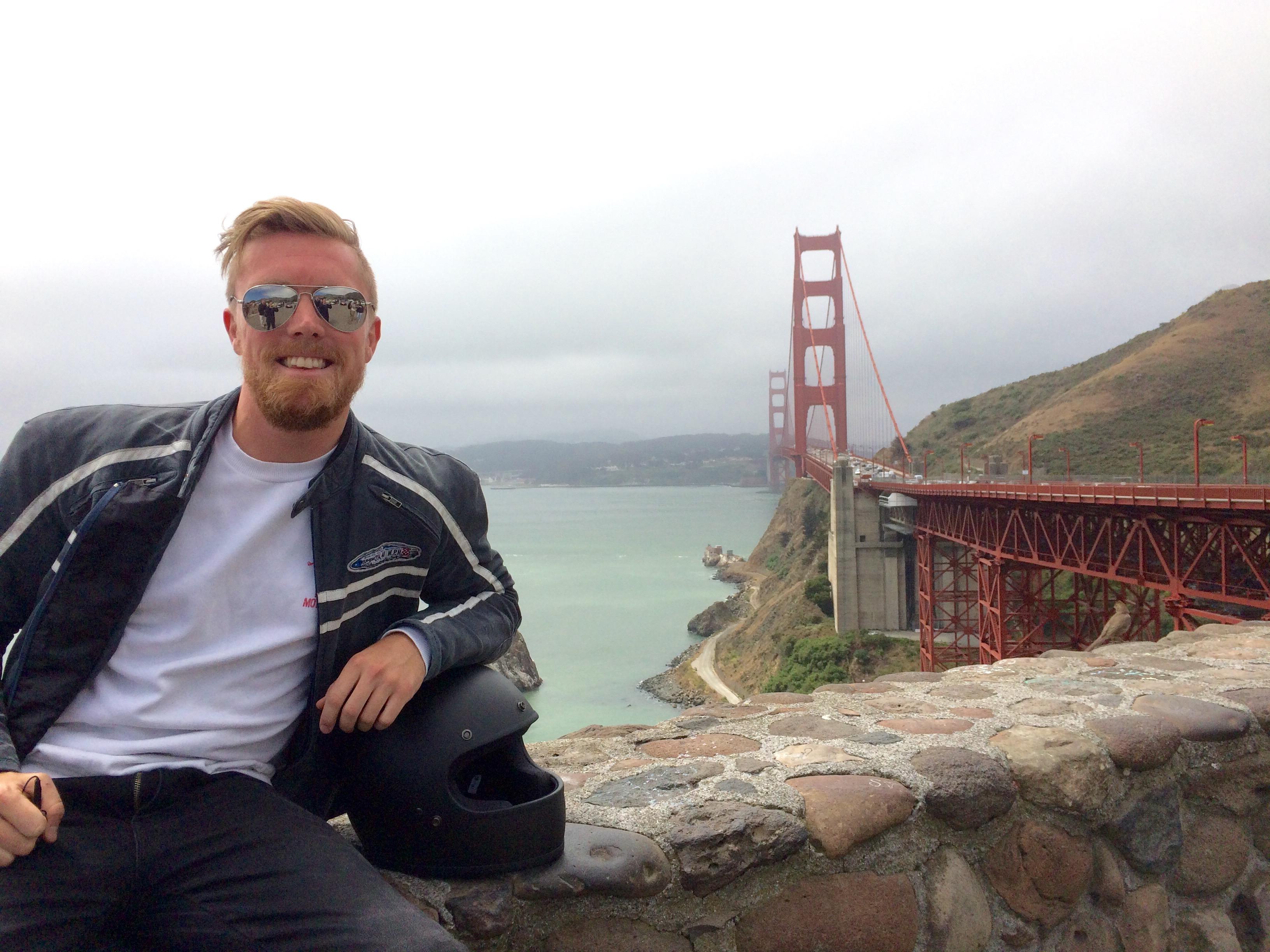 LA hipsters ride stripped-back cafe racers, so I was a little embarrassed rocking up on my “Hardley Dangerous”. But in the car park, worse was in store. Matt was already there. I was so shocked that I dropped the Harley on its side with a horrible crunching of metal.

Somehow, for once on this trip, the tortoise had beaten the hare.

JACOB is about as economical with the truth as he isn’t with the gas. 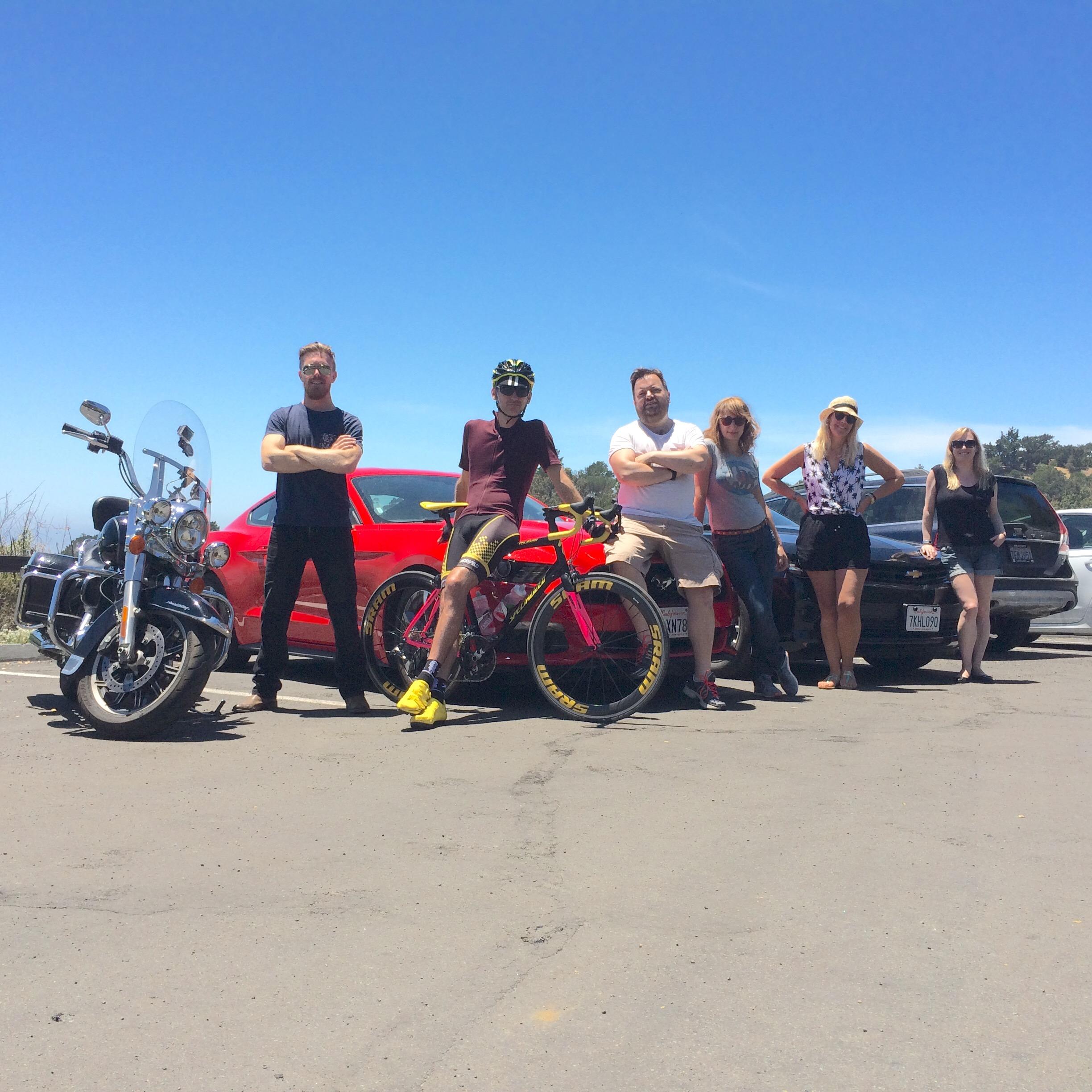 We WERE testing the fly-drive formula but he neglects to mention our chaperone Natalie, from Virgin Holidays, tootling alongside in a giant SUV making sure we didn’t fall off or run out of gas.

So while I hit the open road, Jacob was left poring over his Harley paperwork with Natalie on day one. It was a fairly bleak start through San Francisco’s notorious fog and drizzle, then up one or two of its famous hills before a stop at CVS for drugs.

This American institution is a cross between Boots, Tesco Metro and a doctor’s waiting room. Somehow it feels worse than all three. But it is open 24 hours a day and has cheap painkillers, which helped me through the 80-odd miles to San Jose.

I stopped in Palo Alto to ask if anyone knew the way but the joke fell flat. Unlike the hills that rear up around Big Sur. Exhausted, I called Nat and asked for a lift to the Ventana, which is every bit as beautiful as Jake describes. 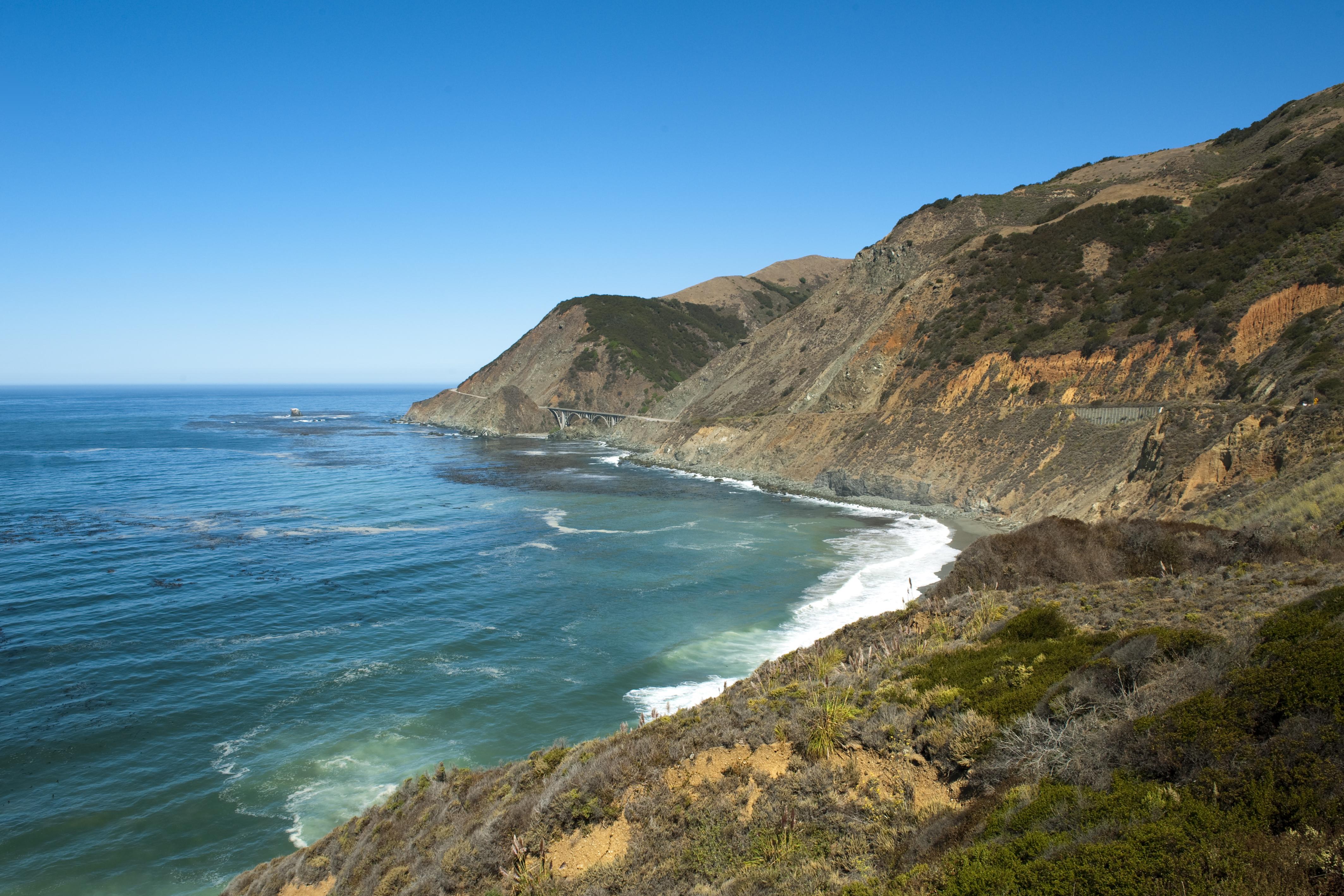 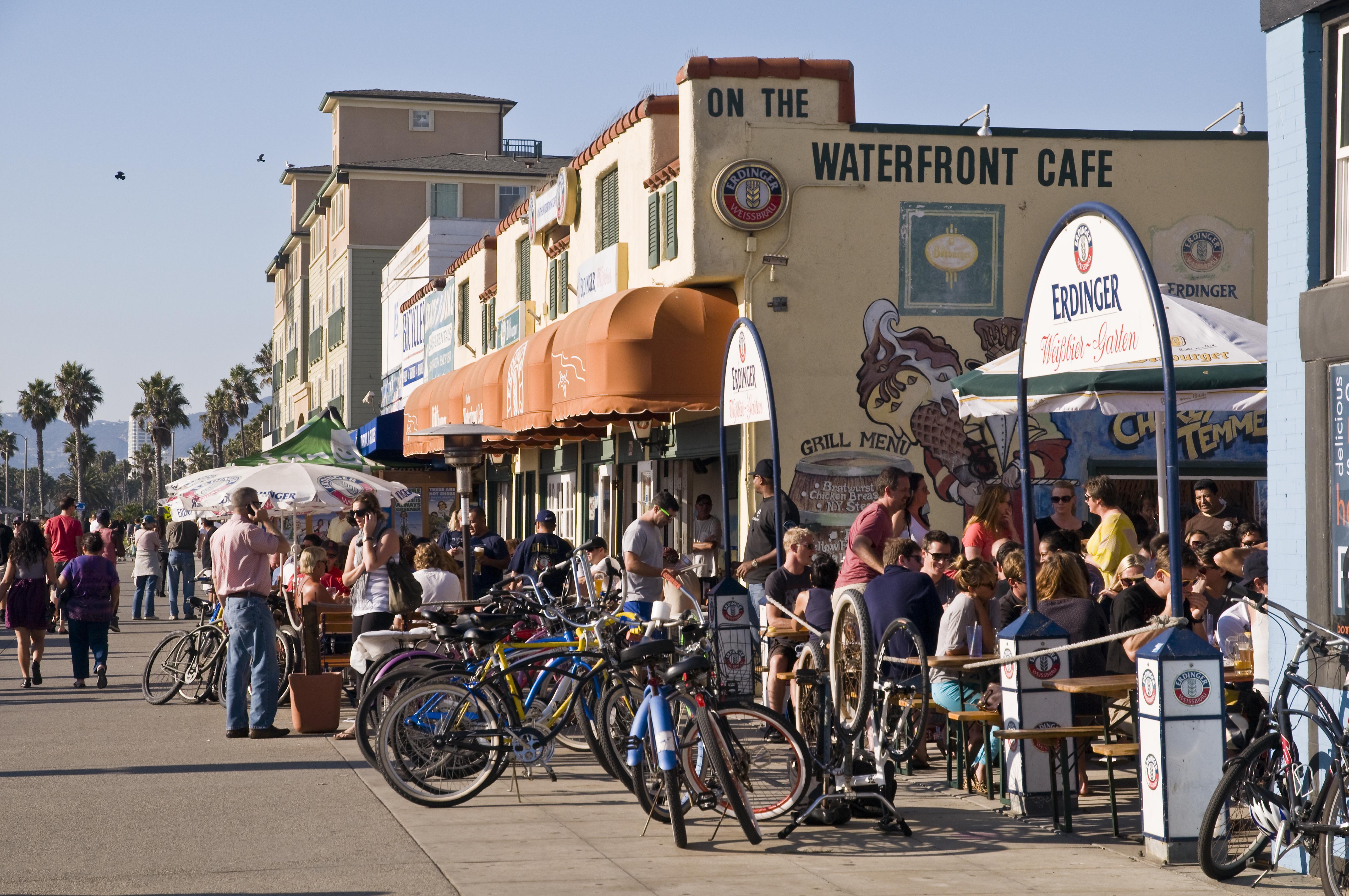 So much so that I didn’t want to leave. But this race wasn’t going to win itself and with Jake threatening another skinny-dip, it was on to Pismo Beach. I bypassed Salinas, Soledad AND Hearst Castle to make up time – a stupid mistake I am still cursing myself for.

Doing this trip again, I’d skip Pismo Beach and spend more time around the sights of Big Sur. Santa Barbara, our overnight on day three, is a different story: Chi chi California at its best.

Getting there saw me settle into my usual rhythm: Up at dawn to cycle 40 miles in the fog – California’s famous “June gloom” that eventually gives way to July fry – then a call to Nat to make sure Jake hasn’t been arrested for showing off.

Then another 30 or 40 miles in glorious sunshine before a rendezvous in a car park somewhere. Today it’s Solvang, deep in the heart of the wine belt. Again, it would be worth spending a few days here instead of pitstopping for a beer before cadging a lift to Santa Barbara like I did. 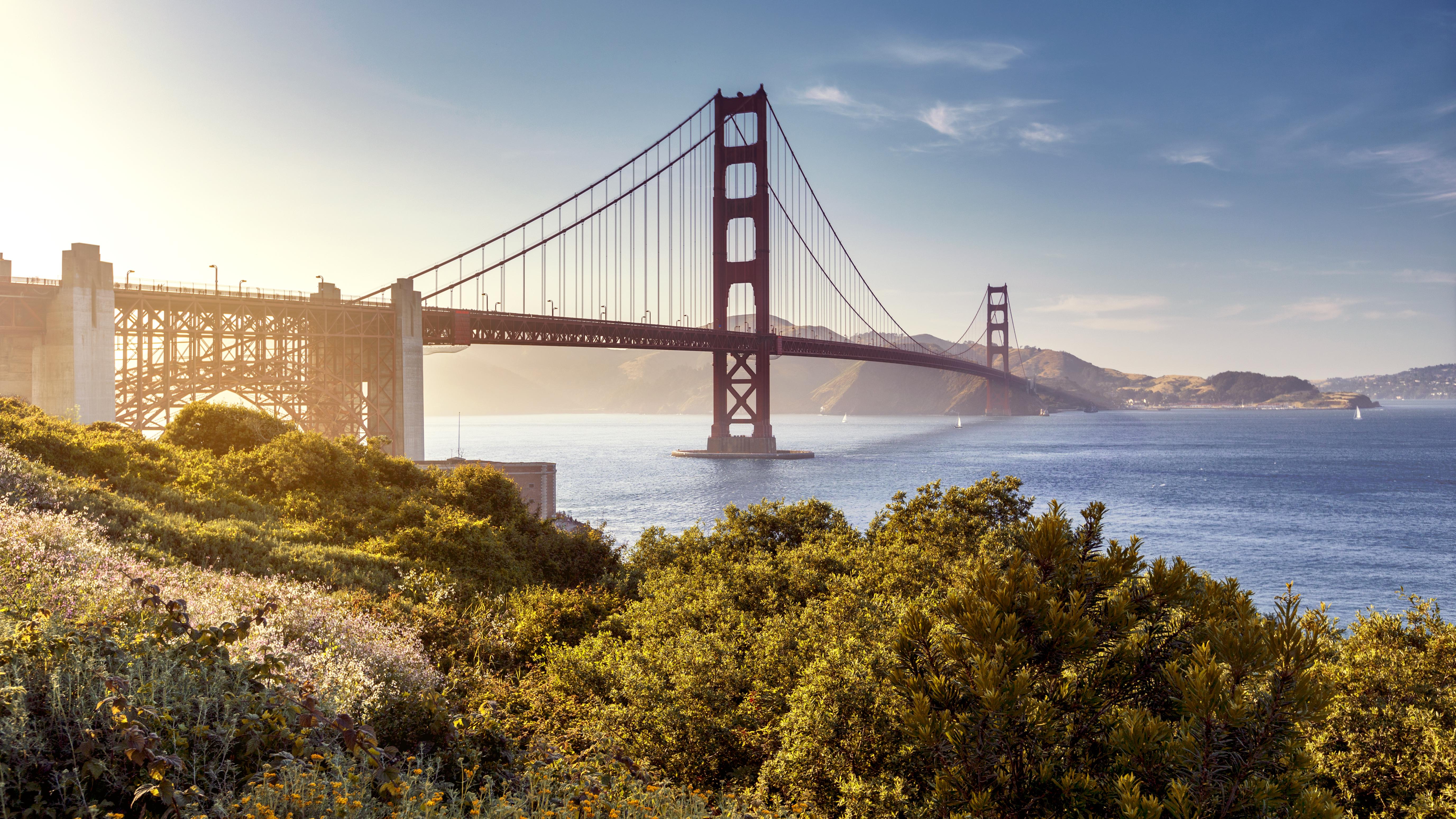 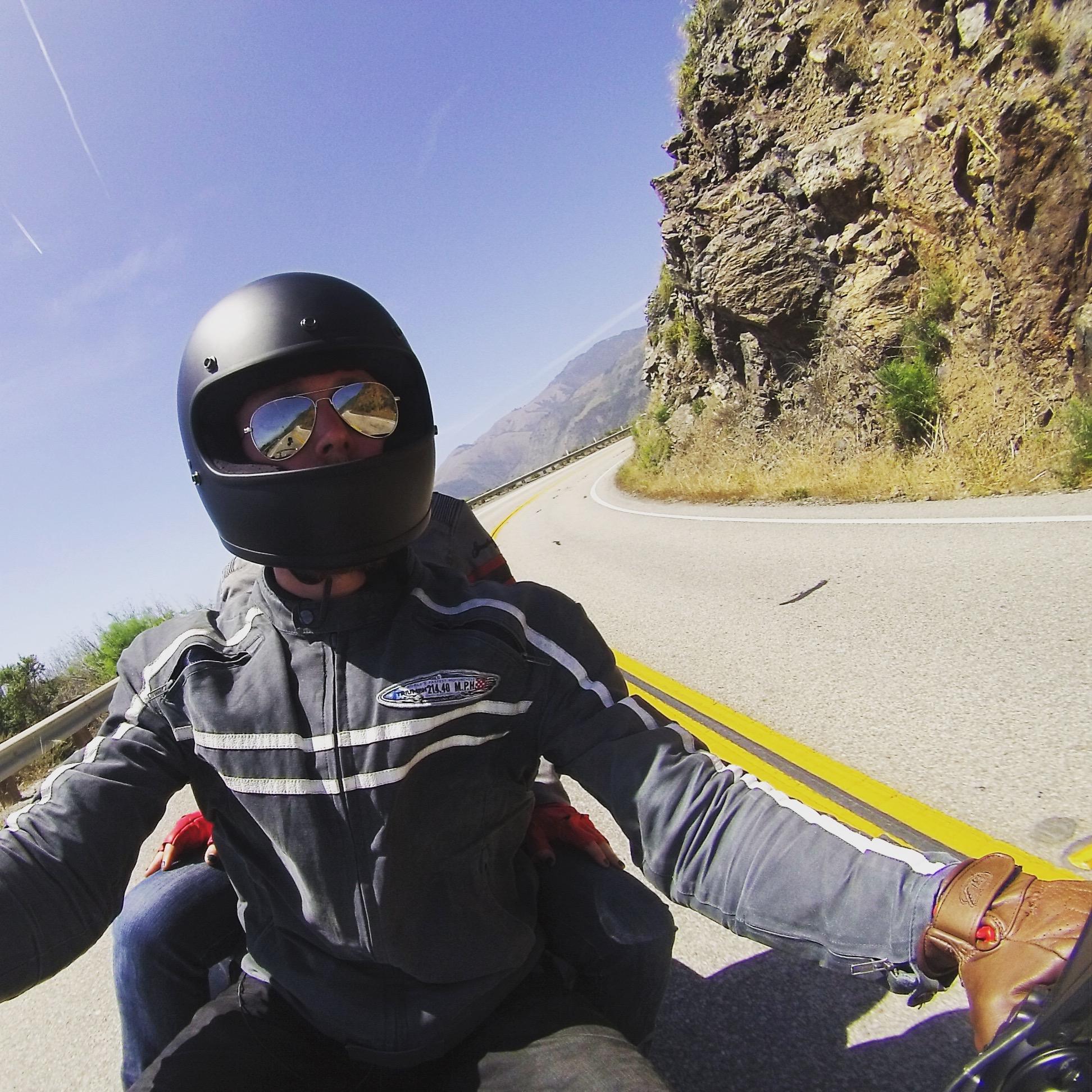 GETTING/STAYING THERE: Eight nights’ room-only fly-drive on the West Coast is from £1,429pp, based on two adults sharing with Virgin Holidays. Price includes flight to San Francisco departing from Heathrow on January 31, return flight from LA to London and car hire, with accommodation at Hotel Zephyr, Cottage Inn, Harbor View Inn and Fairmont Miramar. See virginholidays.co.uk or call 0344 557 3870.


OUT & ABOUT: Eagle Rider hires out Harley-Davidsons from £85 a day, with the option to pick up or drop off at locations throughout California. You can add hotels or join tours. See eaglerider.com

Deja vu struck on day four. The miles slipped by as I passed through town after town – some nice, some not. Foregoing the highway for the back roads exposed the real California – gigantic farms, ugly suburbs and quirky towns you’d be hard pressed to find otherwise.

Stopping off and chatting with the locals made it all worthwhile. From Palo Alto on day one – the heart of wealthy Silicon Valley – to dirt poor farming towns like Guadalupe, the contrasts couldn’t be clearer.

But after 80 or so miles of pockmarked tarmac, I practically wept with relief when I saw signs for LA. And when Malibu reared up out of nowhere, after rounding a bend through giant pillars of stone, I think I did – although it could have been the ocean spray on my face.

It’s one of the most beautiful sights I’ve ever seen. But not as beautiful as the look on Jacob’s face when he turned up at the finish line and saw I was already there.
Yes, I had won this stage – but California is the real winner here. You simply cannot have a bad holiday in the Golden State.