Tate Modern overtakes the British Museum to become the UK’s most popular tourist attraction after welcoming 5.9MILLION visitors in 2018

The Tate Modern has overtaken the British Museum to become the most popular UK tourist attraction.

The London art gallery, which opened in 2000, welcomed 5.9million visitors last year – up 3.7 per cent on the previous year.

The British Museum, which had been the most-visited for nine years running, had 5.8million guests in 2018. 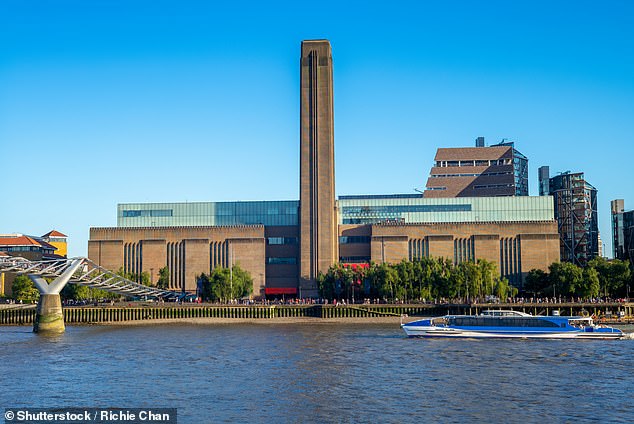 The Tate Modern art gallery on the southern bank of the River Thames. It has been named as the most popular tourist attraction in the UK 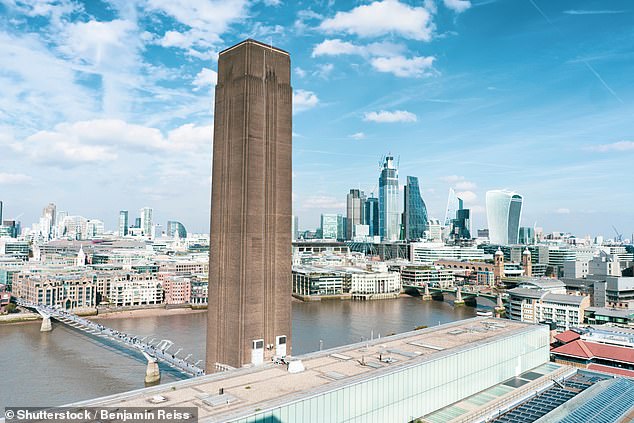 The increase in visitors to the Tate Modern was driven by an extension to the art gallery and exhibitions featuring the work of Pablo Picasso and Amedeo Modigliani.

The British Museum said in a statement: ‘We congratulate Tate Modern on being the UK’s leading visitor attraction.

‘The British Museum continues to welcome nearly six million visitors a year to the collection, numbers for the period January – March 2019 were 20 per cent up on the same period the previous year, which bodes well for 2019.

‘We are especially proud of the nine million UK visitors we reach through our national programme activity across the country.’

The third most-visited attraction in the UK is the National Gallery while the Natural History Museum takes fourth place and the Southbank Centre is in fifth. 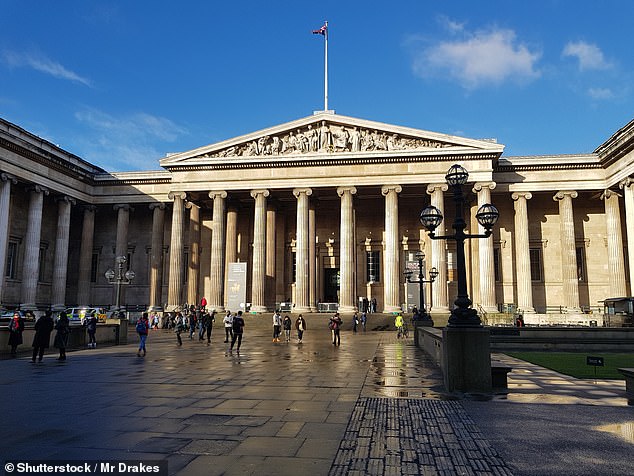 In second place is the British Museum, pictured, which had 5.8million guests in 2018. It had been top of the ranking for nine years running until this year 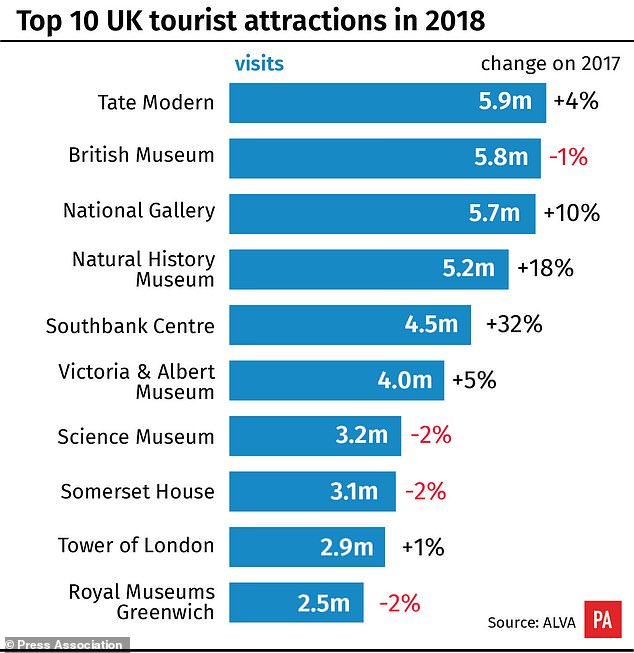 The UK’s most popular attractions outside London were in Scotland, with the National Museum of Scotland taking 11th place with 2.2million visits, followed by Edinburgh Castle with 2.1million.

Chester Zoo was the most-visited site in England outside London, with  two million visits.

Several gardens, zoos and stately homes with parkland saw a drop in demand as the UK was hit by both freezing and sweltering temperatures in 2018.

The country’s second most popular garden, RHS Garden Wisley in Surrey, saw its visitor numbers drop by more than 70,000. 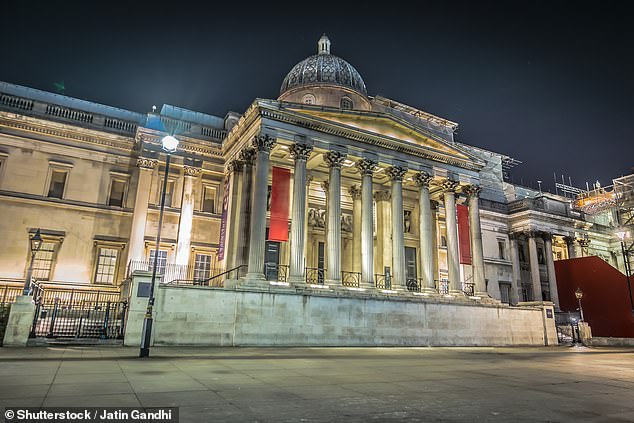 The third most-popular tourist attraction in the UK is the National Gallery in London, pictured 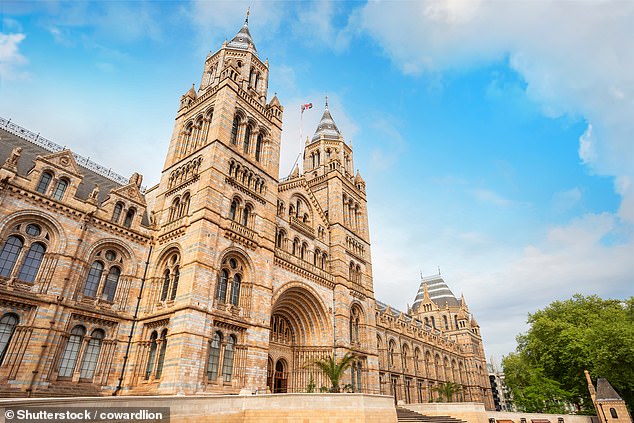 The Natural History Museum in South Kensington, London. It is the fourth most-popular tourist attraction in the UK

The UK saw widespread snow between January and March – partly due to the so-called Beast from the East – with temperatures plunging to minus 14C (6.8F).

This was followed by a heatwave, which led to the joint-hottest summer on record, with much of the country experiencing dry, sweltering conditions.

Alva director Bernard Donoghue told the Press Association: ‘The Beast from the East really affected a number of outdoor sites – gardens and zoos in particular.

‘Then, during the summer, some members of the public found it too hot to be outside. 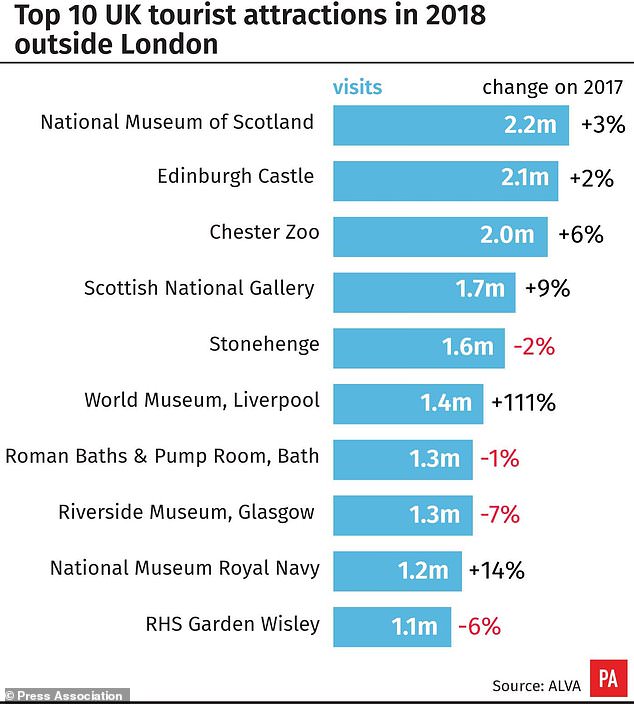 A graphic showing the most-visited tourist attractions in the UK outside London. Top of the list is the National Museum of Scotland

‘I wish tourism was slightly more sophisticated, but weather has always been a determining factor on where people go.

‘Last year was odd because we had both extremes within a 12-month period.’

Globally, the most-visited museum or art gallery in the world is the Louvre, in Paris.

In figures compiled in a report by the Art Newspaper, the Paris museum welcomed more than 10 million visitors last year.

The National Museum of China comes second, the Metropolitan Museum, New York, is third and fourth is the Vatican Museum.

The Tate Modern is the fifth most popular museum or art gallery globally and the British Museum is sixth.

THE UK’S MOST-VISITED TOURIST ATTRACTIONS IN 2018