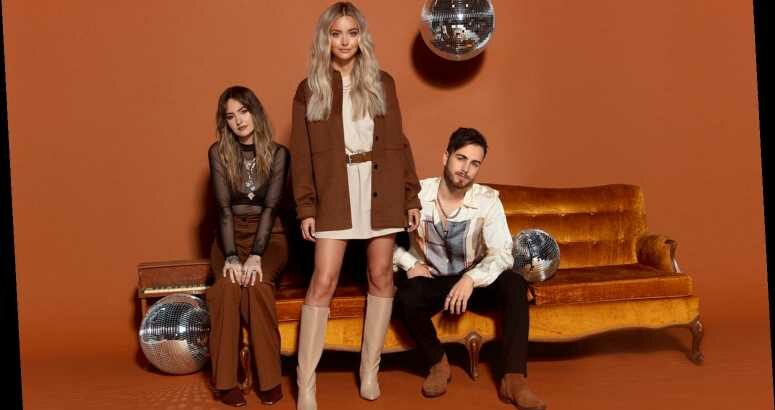 If the members of the harmonious country trio Temecula Road look extra happy and content these days, there are a few sweet reasons why.

Not only are member Emma Salute and her musician boyfriend Avery Barker currently living together following a whirlwind romance, but Maddie Salute is also celebrating one year of dating bliss alongside famed pro motocross racer Cameron McAdoo. And while their Temecula Road bandmate Dawson Anderson finds himself currently single at the moment, he can't help but admit that he too is essentially in love … simply in the knowing that two of his best friends are happier than ever.

"There have been guys in the past [that Emma and Maddie have dated] where I've been like, 'I don't like this dude' or 'You deserve better,'" Anderson, 21, admits to PEOPLE about the friends-turned-bandmates that he grew up with in their home state of California. "I love to see them happy and see them have significant others that inspire them and push them to be the best versions of themselves." Indeed, Temecula Road's personal relationship status often melds with their professional lives, both in their songs and through appearances on such shows as ABC's The Bachelor, on which the country trio will debut and perform their deliciously romantic new song "Everything I Love" Monday evening.

"We actually had this song on hold and recorded for three years," explains Maddie, 20, who proudly proclaims herself to be "the biggest Bachelor fan ever." "We felt like The Bachelor was the perfect moment for this song to come out and it was the perfect song to use for that. So, we are really excited that it is finally out in the world."

"We have been through a journey with this song," adds Anderson, who remembers getting hooked on the addictive dating show years back. "When you have a song for that long, so much about us and our voices changes, to the point that we reworked the mix and rerecorded the vocals for it. It's really cool to see where ['Everything I Love'] started and where it is now."

Want to get the biggest stories from PEOPLE every weekday? Subscribe to our new podcast, PEOPLE Every Day, to get the essential celebrity, entertainment and human interest news stories Monday through Friday. Get a taste of the podcast below.

Of course, actually getting themselves on the set of The Bachelor in the middle of a pandemic was far from easy. Not only did the bandmates have to endure countless COVID-19 tests while on set, but they also had to quarantine in their respective hotel rooms for a number of days to ensure all was well for the October 2020 taping.

But their patience paid off, the moment finally arrived and it was … awkward.

"It gave us a good laugh to see them making out like two feet in front of you," says Maddie of watching current Bachelor Matt James enjoying a smooch sesh with one of his lucky ladies during the middle of the night taping.

"The production team warned us to just look past them," recalls Emma, 21. "They told us, 'If you look at them, you might laugh so don't do that.' Obviously, it was a sweet moment for them, but [it was] so awkward. It was just the three of us on stage and the two of them and we were just like, 'We can't look.'" If that wasn't enough, the band — who recently made their Grand Ole Opry debut — were trying their absolute best to do the performance in one take.

"We were very nervous," Anderson remembers. "It was their special moment. If we mess up, then that messes up their moment. It's not just like we could stop and do it again. It was one of those things where it was so fun … once it was done."

Anderson lets out a hearty laugh, but there is no doubt that fun follows Temecula Road wherever they go in their professional lives and even, in their own individual relationships.

"We write together and sing together and have fun together…and his family is all musical too," explains Emma of her relationship with Barker, who happens to be the son of country music legend Sara Evans. "We met when we were on [Evans'] Christmas tour a couple months before quarantine when we were opening up for her back in December and it's just all been really special. I have never been as close to somebody else's parents the way I am with his — it just happened naturally over quarantine. We all live in Nashville, so we spend a lot of time together. It's just always been super natural. We are just really close and really mesh."

"It's just really nice to have someone always in your corner," adds Maddie, who will celebrate one year of dating McAdoo later this month. "To be able to go on each other's journey and support each other and be there for each other, it's just really special."

And while Dawson is single after a recent split and "not so much ready to mingle," one thing is for sure … love will always find a way into the music of Temecula Road.

"I was in a relationship previously and tons of songs came from it," says Dawson, who is currently busy songwriting with his Temecula Road bandmates five days a week. "That's where most of our musical inspiration comes from."

And then, Anderson chuckles.

"Maybe I am ready to mingle," he admits with a laugh.