The best and worst cruise lines of 2019 revealed: Viking Ocean Cruises comes top of the ranking and MSC sinks to the bottom

The best and worst cruise lines of 2019 have been revealed in a new report, with Viking Ocean Cruises claiming number one spot and MSC Cruises anchored at the bottom.

The annual research, by consumer group Which?, looked at 20 cruise companies and asked over 2,500 passengers to rate their experiences out of five across 11 categories. 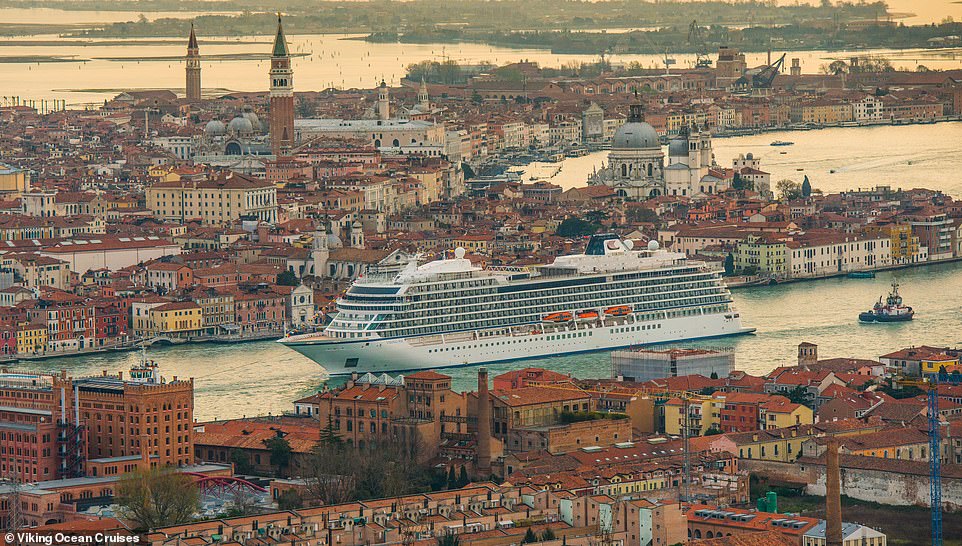 The small ship line Viking Ocean Cruises has been named as the best cruise line for 2019 by consumer champions Which? Pictured is one of Viking’s liners sailing in Venice

Viking Ocean Cruises is a small-ship line that describes itself as a ‘thinking person’s’ cruise with libraries and planetariums on board rather than nightclubs and casinos.

The line scored a huge 88 per cent customer satisfaction rating with five stars across the board in every category apart from entertainment, but here it only dipped to four.

Which? said many passengers praised Viking Ocean Cruises for its organisation and good range of port excursions as well as the ‘friendly and knowledgeable’ service on board.

Wendy Atkin-Smith, managing director at Viking UK, said: ‘As the newest ocean cruise line in the world we are thrilled to have come top of the Which? table, especially as we are new to the rankings.

‘Viking launched its first ocean ship in 2015 so to already be named a Recommended Provider for both our ocean and river cruises is phenomenal – and testament to the hard work and vision of our whole team. 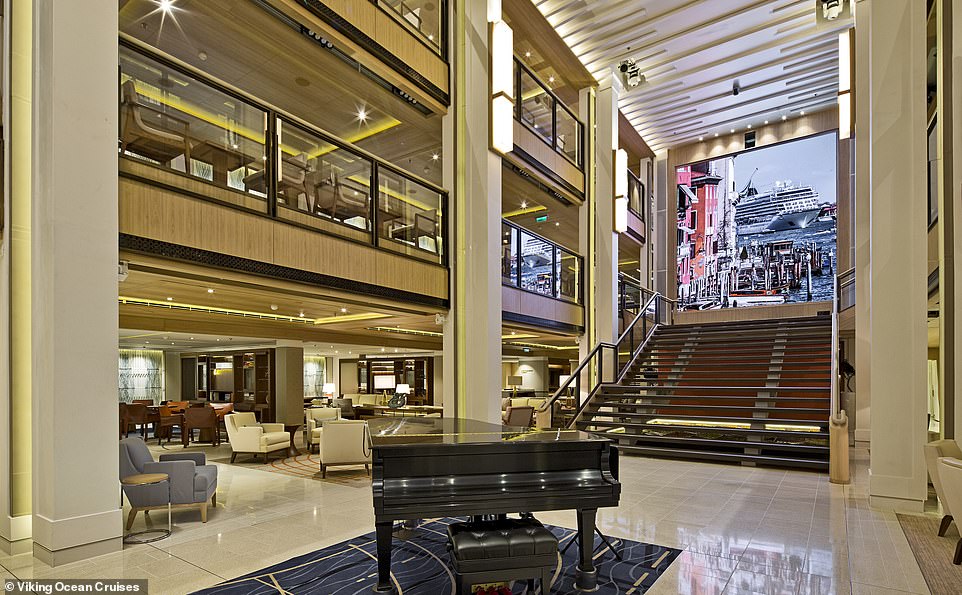 Viking Ocean Cruises scored a huge 88 per cent customer satisfaction rating with five stars across the board in every category apart from entertainment. Pictured is the atrium on a Viking Ocean ship 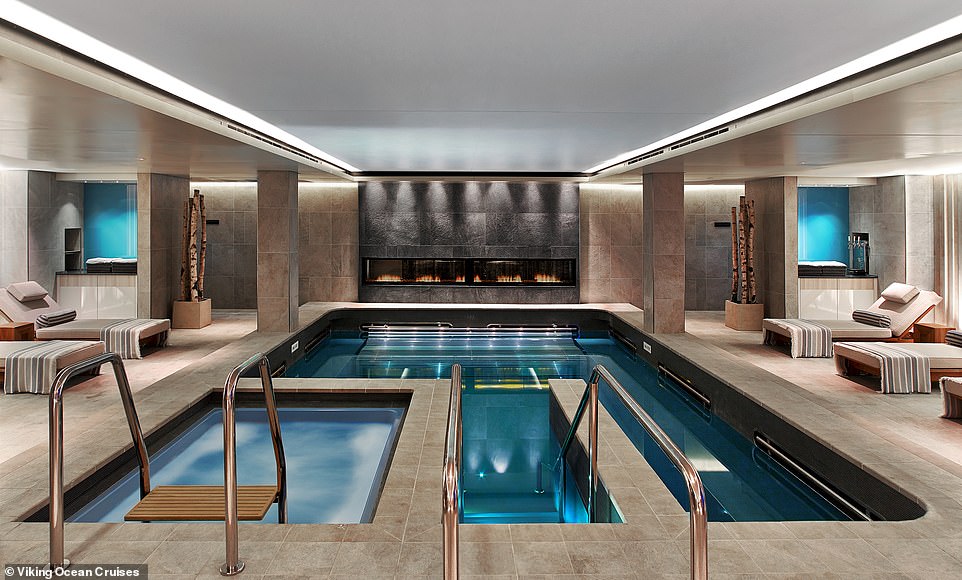 Pictured is a LivNordic Spa on board a Viking Ocean Cruises ship. They are available on board all the company’s ocean vessels

‘Guests love our small, beautifully designed ships not to mention our destination experiences so we are particularly proud that Viking is the only brand to score five stars for our on-board facilities.

‘Many people are surprised to learn that flights, shore excursions, WiFi, gratuities and wine and beer with meals are all included in our pricing.

‘Guests can even use our spa facilities for free and there is no charge for dining in alternative restaurants. With ocean cruises starting from under £2,000 per person, our guests also know that they can rely on Viking to deliver exceptional value.

‘We are thrilled that Viking’s way of doing ocean cruises and all the things we stand for have been recognised by the very people we aim to serve – our own guests.’ 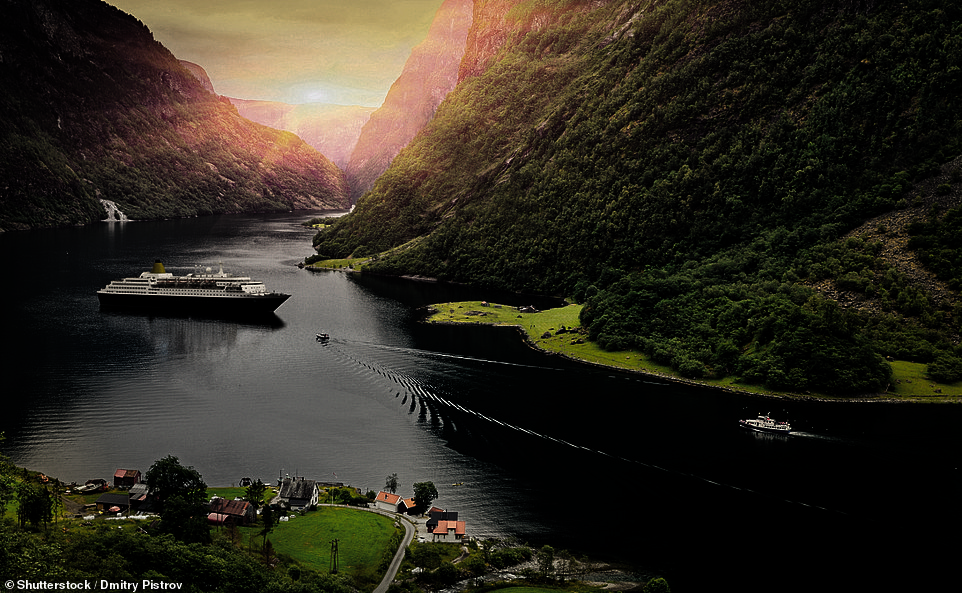 Coming second in the Which? report is Saga Ocean Cruises, the cruise line that is exclusively for those over 50. Pictured is the Saga ship Saga Sapphire in the Norwegian Fjords 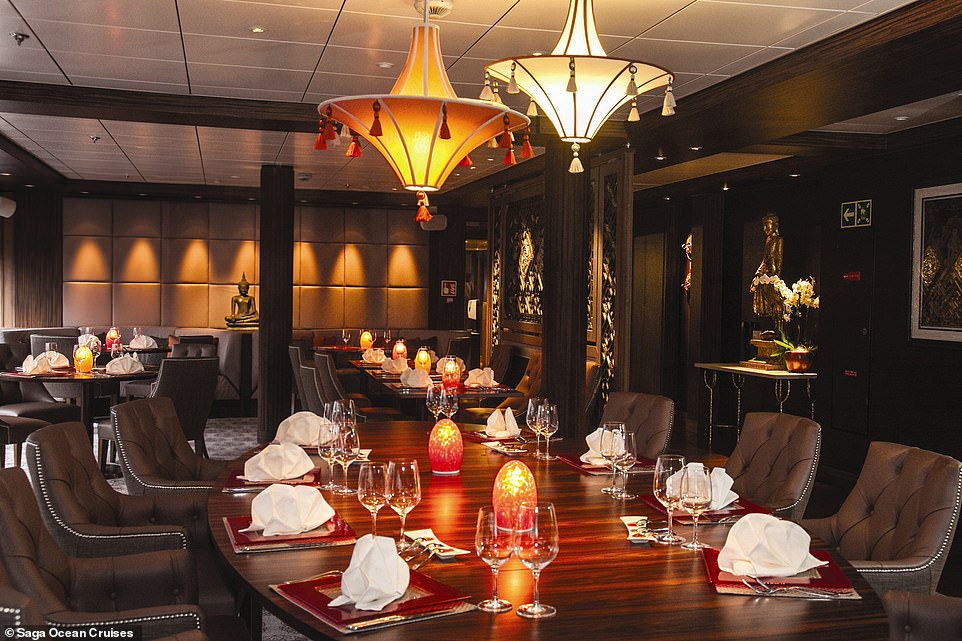 Saga scored five out five in seven of the 11 categories including customer service, food and drink, atmosphere and value for money. Pictured is one of the dining rooms on board the Saga Sapphire

Coming second in the Which? report is Saga Ocean Cruises, the cruise line that is exclusively for those over 50 and sails around Europe and the Caribbean on just two ships.

Its customer satisfaction score was just behind Viking’s on 87 per cent and it scored five out five in seven of the 11 categories including customer service, food and drink, atmosphere and value for money.

Which? said passengers said they appreciated the chance to get to know ‘like-minded people’ on Saga cruises and summed up by saying they have ‘small ships and high standards at a reasonable price’. 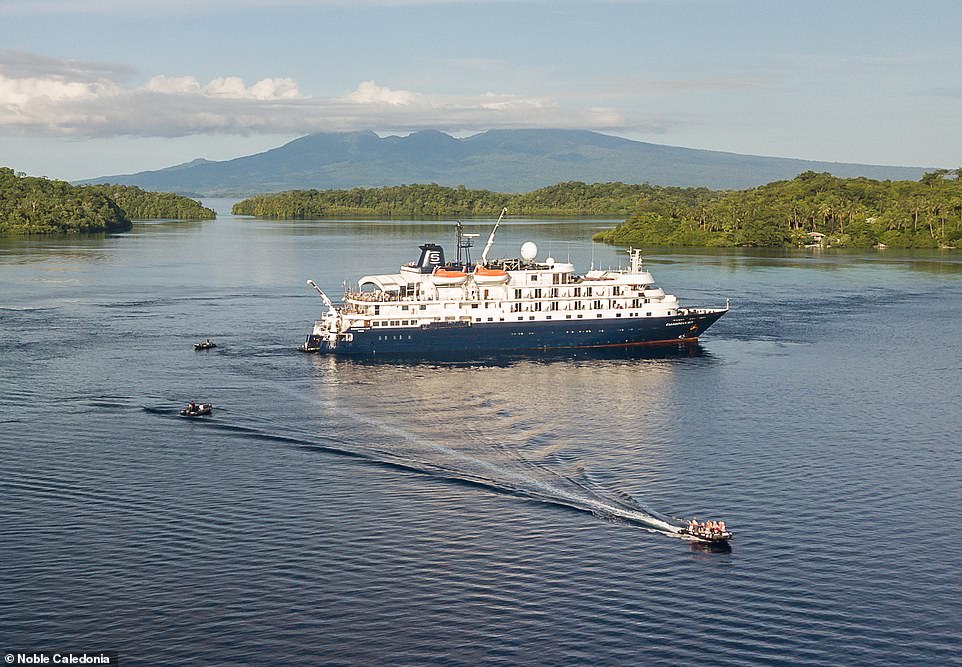 Noble Caledonia – a company that offers cruises to locations such as Antarctica and the Aegean – came third in the ranking. Pictured is a Noble Caledonia vessel 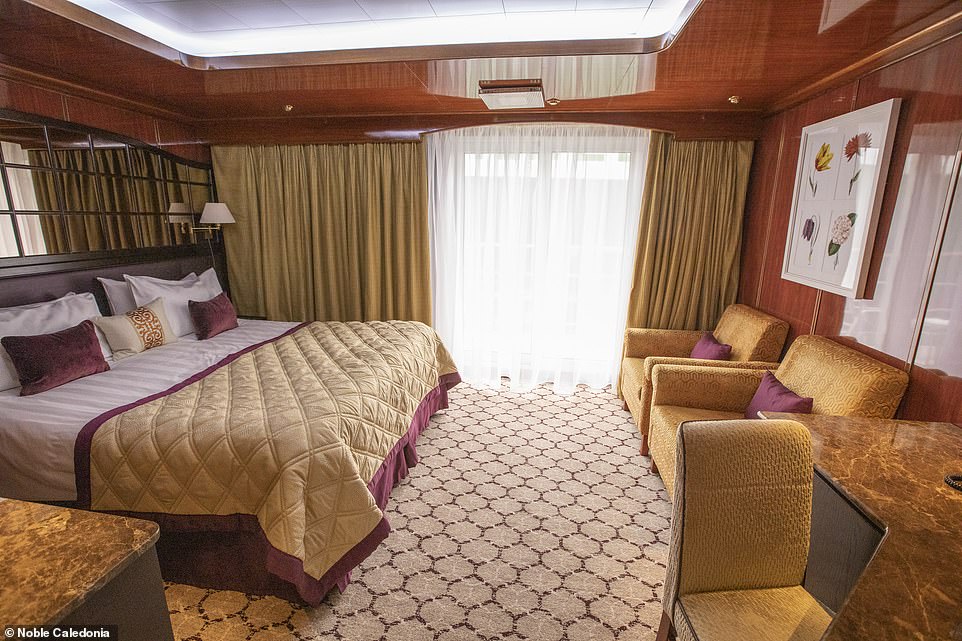 Noble Caledonia scored a passenger satisfaction score of 86 per cent and was the only cruise line out of 20 that scored a full five stars for port excursions. Pictured is one of its cabins

Claiming third spot in the ranking is Noble Caledonia – a company that offers cruises to locations such as Antarctica and the Aegean.

It scored a passenger satisfaction score of 86 per cent and was the only cruise line out of 20 that scored a full five stars for port excursions, with Which? saying it often calls at ‘small towns and beauty spots not visited by large ships’.

The consumer group also said that many passengers felt they were well taken care of, with Noble Caledonia receiving five stars for customer service. However, it only scored three stars when it came to on-board facilities.

Which? said: ‘If you’re more interested in well-run visits to remarkable destinations than gyms and pools, this is a recommended choice.’ 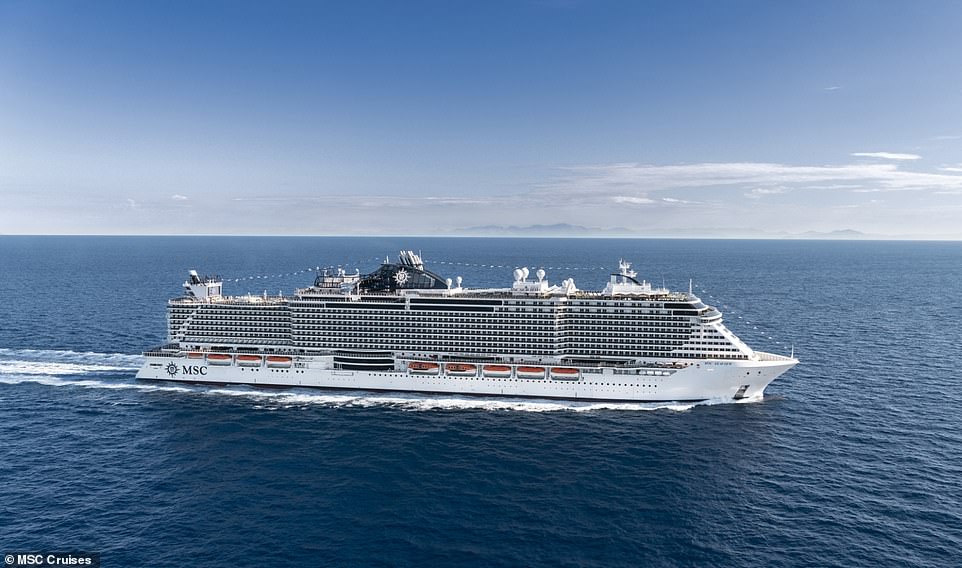 Coming at the bottom of the Which? table is MSC Cruises, a Swiss-based company that has a fleet of 15 ships

Coming at the bottom of the table is MSC Cruises, which is a Swiss-based brand that has a fleet of 15 ships with sailings all around the world.

Its overall customer satisfaction score was 54 per cent and it was the only cruise line in the survey to be awarded just two stars for customer service. MSC Cruises in fact only scored two stars for most categories, apart from cabins and value for money, where it scored three.

Which? said passengers told them they were ‘bombarded with sales promotions’ while on board and that the drinks packages that were offered were ‘confusing’. 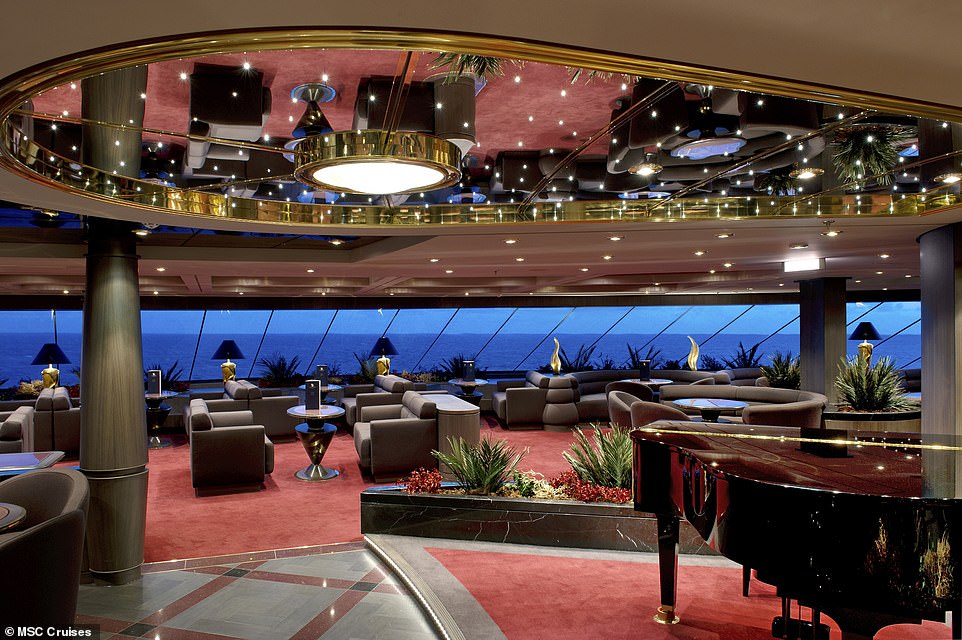 It explained: ‘MSC may be cheap but it is not cheerful.’

Rory Boland, Which? Travel editor, said: ‘It’s not deep pockets and big names that guarantee plain sailing when it comes to choosing a cruise.

‘Whether it’s budget or luxury, it was the smaller brands and smaller boats that fared the best.

‘Cruise-line passengers often book with the same company over and over again – it’s that comfort of knowing what to expect on board that keeps you going back. But if you’re willing to shop around, those who booked onto vessels with under 1,000 capacity told us they had a better time.’

A spokesperson for MSC Cruises said: ‘MSC Cruises is dedicated to ensuring that every guest who travels with us has a memorable experience for all the right reasons. As such, we were disappointed that some of the 46 guests surveyed by Which? Travel Magazine were not completely satisfied with every aspect of their stay with us.

‘We are very surprised by the comments in the report, as they are not in line with the holiday experience we provide and the feedback we consistently receive from our guests and trade partners.

‘In the past 12 months we have won more than 10 awards in the UK and Ireland, recognising the excellence of our product. All these the accolades were voted by local consumers and trade partners from this market. Considering the significant investments we made in innovative hardware and tailoring our product for the UK market, MSC Cruises offers great value for money. That is also the feedback we consistently receive.

‘MSC Cruises welcomes more than two million passengers on board each year, and we are committed to offering each of them the best experience and value for money.’

Meanwhile a Cruise Lines International Association spokesperson added: ‘As the global body representing the vast majority of ocean and river cruise lines, we were disappointed and surprised not to have been involved in scoping out this piece of research.

‘The survey appears very limited in the number of people surveyed, random in its approach, and therefore is not a true indicator of the incredible onboard experience, value and impeccable service offered by today’s cruise holiday, whether on an ocean or on a river ship.

‘The cruise industry enjoys one of the highest repeat factors in the travel industry, around two million British people took a cruise holiday this year.’

But a spokesperson from Which? said: ‘We’re confident that our survey of ocean cruise companies used a fair and robust methodology to assess how consumers rate cruise companies.

‘The results show that consumers are generally positive about their experience and most companies are doing a great job and achieving great feedback from their passengers: overall people are still very much enjoying cruise holidays.

‘Variation in performances are to be expected, and unfortunately the people who told us about their experience with MSC Cruises had a less positive experience than many of the other cruise operators we assessed.’

THE BEST AND WORST CRUISE LINES FOR 2019 AS RATED BY WHICH?