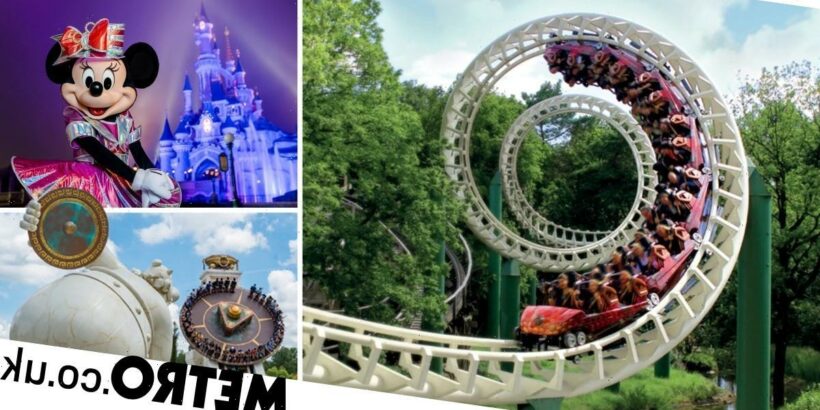 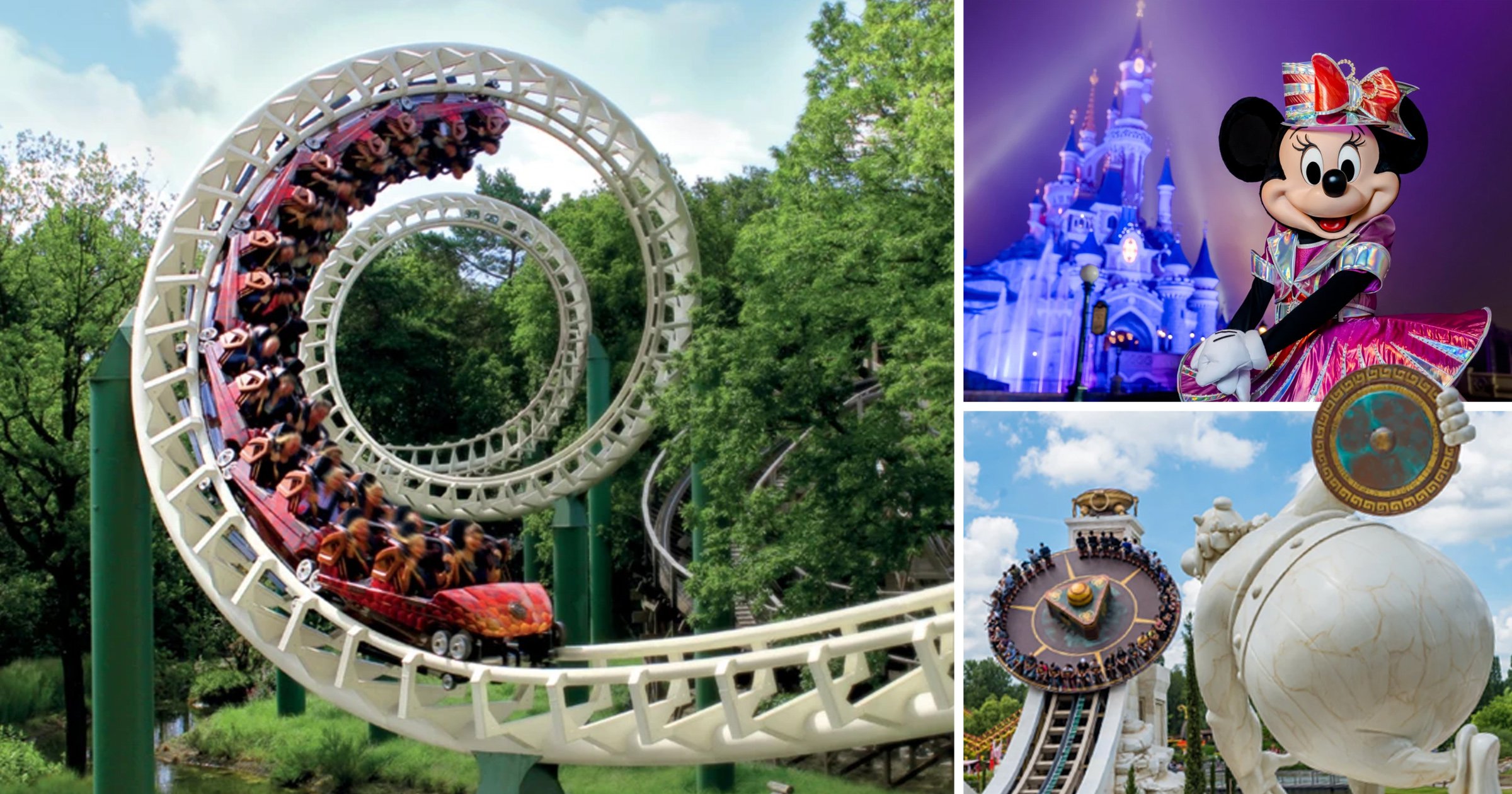 The USA might be known as land of Disneyworld and Six Flags, but it’s certainly not the only place you can travel for thrills.

Adrenaline junkies can pop across the Channel to get their fix of some of the world’s best rides and rollercoasters.

And seeing as several European theme parks have big birthdays this year, we think it’s a pretty good time to pay a visit.

From Sweden’s eco-friendly amusement park to a entire park dedicated to Gaulish comic book hero, here are some of the best to book a trip to.

Been to Disneyland Paris before? You may be surprised by just how much the park has changed since it opened in 1992.

In addition, from March 6 there will be a new daytime show outside Sleeping Beauty Castle and many of the characters will be rocking new ‘iridescent’ costumes.

But what we’re most excited about is the Avengers Campus, which opens this summer.

Expect Marvel-themed rides, shows and restaurants, along with Web Slingers: A Spider-Man Adventure, an interactive dark ride. Also new is Disney’s Hotel New York: The Art Of Marvel, which has superhero-themed suites and walls heaving with rare Marvel artwork.

Thrill rating: 4/5.
Top ride: The skyscraping Twilight Zone Tower of Terror, a scary drop ride set in an abandoned hotel.
Little ones will love: Disney’s Animation Academy, where budding artists can draw their own Disney character.
Stay: One night at Disneyland Paris starts at £287, including two-day park access.

This history-themed park only reopens in April but it’s worth the wait.

Puy du Fou isn’t just one of the world’s largest theme parks (it’s got more than 20 shows, 26 restaurants, eight bars and six themed hotels), it’s also one of the quirkiest.

In 2018, for example, crows were trained to pick up discarded cigarette butts, and during the Les Vikings show a life-sized longboat pops out of a lake.

Thrill rating: 3/5.
Top ride: Puy du Fou is more famous for its shows than its rides and Le Bal des Oiseaux Fantômes is the best: 330 birds of prey perform spectacular acrobatics and fly in formation mere inches above the audience’s heads.
Little ones will love: The Viking Fort, a highly detailed replica where visitors can learn about life during Viking times.
Stay: Rooms at Puy de Fou’s Le Camp du Drap d’Or accommodation, start at £54pp, including entry.

Another one celebrating its birthday this year (its 70th), Europe’s third-
largest theme park officially covers 180 acres but only 11% has been developed – the rest is filled with woodland and lakes.

But there’s no shortage of thrills thanks to rides like the high-speed Baron 1898 and Aquanura, Europe’s largest water show.

There are two new anniversary attractions: Sirocco, where you’ll experience a raging storm at sea, and Archipel, which takes you on a voyage of discovery to an adventure island.

Look out for the park’s bins – walk past them and they’ll shout ‘papier hier’ before thanking you for feeding them.

Thrill rating: 4/5.
Top ride: Baron 1898, a high-speed roller-coaster with sudden drops, tight turns and head-spinning inversions.
Little ones will love: Fabula, a 4D movie about a grumpy (but very cute) bear and a brave squirrel.
Stay: Rooms sleeping up to four at the Efteling Hotel start at £263pn, including breakfast and unlimited access to the park.

For a brilliant insight into the future of theme parks, head to Gothenburg’s theme park, Liseberg.

The park relies heavily on renewable energy and its most popular ride, Loke, not only generates its own electricity but feeds surplus power back into Sweden’s grid.

You’ll find vegetarian food throughout, along with the first fully vegan restaurant in a theme park, The Green Room.

Thrill rating: 3/5.
Top ride: Atmosfear, a freefall from a 479ft-high tower at a terrifying 68mph.
Little ones will love: Tuta & Kör – aka Honk & Drive – where mini petrolheads can have a go at driving a (not real) car. Look out!
Stay: Rooms at the Hotel Liseberg Heden start from £94pn, including park entry.

This Costa Dorada park was almost the location of Disney’s expansion into Europe (it lost out to Paris, obvs, but is still winning massively in the sunshine stakes) and has six eclectically themed areas that pay tribute to everywhere from Sesame Street to China.

Its 53 attractions include nine roller-coasters and a huge, Caribbean-themed water park.

Thrill rating: 5/5.
Top ride: The Red Force launch coaster, in the Ferrari Land park – brave it and you’ll go from zero to 112mph in just five seconds.
Little ones will love: Los Potrillos, where cowboys and cowgirls can saddle up and ride a mechanical horse around a looping track.
Stay: Rooms at PortAventura World’s Hotel PortAventura start at £178pn.

This French theme park, named for the comic book hero, reopens in April and has 47 attractions and three hotels, including newest Les Quais de Lutèce.

Supposedly set in Lutetia 50BC (an ancient settlement that once stood near the banks of the Seine), the resort’s first four-star hotel has been brilliantly themed – the property feels like a medieval village, complete with Roman-era quayside and cosy taverns with low-slung wooden roofs.

When it comes to the rides, don’t miss Tonnerre 2 Zeus, a speedy wooden roller-coaster.

Open only during the warmer months (this year from April 30), Fårup has the largest water park of any theme park in the country.

This spring it will unveil Fønix, Denmark’s tallest and fastest roller-coaster, subjecting riders to 9.2 seconds of weightlessness.

It’s another park that’s thrown out the rulebook – there’s loads of green space and its hotel has Green Key certification.

Thrill rating: 3/5.
Top ride: DrageKongen, a dragon-themed ride that is one of Europe’s fastest suspended roller-coasters.
Little ones will love: Frøerne, where youngsters sit in cute, frog-shaped cars and try to avoid the spouts of water shooting out of the mouth of the supersized frog in the centre.
Stay: Family rooms at Hotel Fårup start at £208pn, including entrance for two adults and two children.