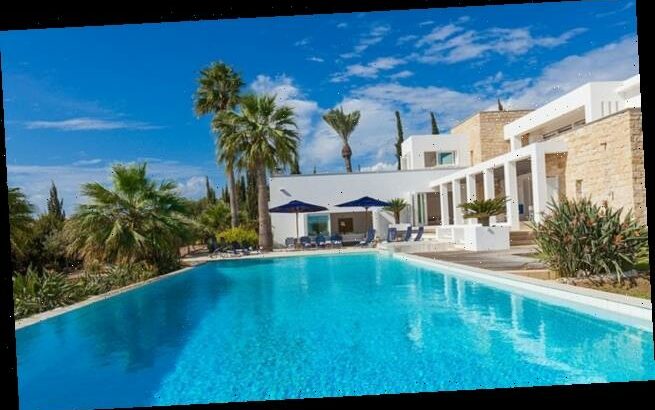 The island’s new Covid rules mean British travellers could be visiting as early as May, so book your villa and… grab some Cyprus sunshine now!

Summer comes early to Cyprus, with temperatures in May hovering around 25C (77F) thanks to its southerly position in the Mediterranean. So it’s good news that the island has announced that fully vaccinated Britons can travel there from May 1 without needing either to quarantine or to take expensive and time-consuming Covid tests.

That date is more than a fortnight before the UK Government is considering foreign travel again (May 17) but it means there is a strong chance that holidays in Cyprus with minimal restrictions will be back on the cards. Those who have not been vaccinated at least a week before travel can still go but will need a negative Covid test before and/or on arrival – details are yet to be announced. Children under the age of 12 are exempt.

The good news is there is still plenty of availability, but don’t leave it too long before booking, as villas fill up fast, whether you are in search of a romantic idyll or a place to get together with family and friends. 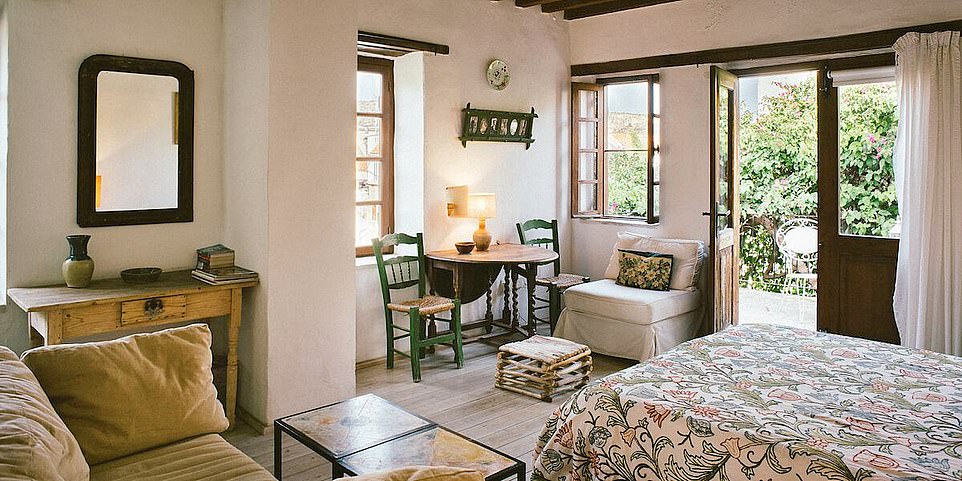 Villas for two can be hard to find in Cyprus, but at Modus Vivendi in the sleepy hamlet of Psematismenos, between Larnaca and Limassol, there are six of them.

Beautifully rustic, with stone walls, beam and bamboo ceilings and flagstone floors, their cast-iron four-poster beds, mismatched furniture and contemporary art make them charismatic boltholes. Four are clustered around a shared pool, shaded by cypresses, with another two in a cottage across the lane that can be joined together to make one independent house for families or two couples travelling together.

Although the coast is just a couple of miles away, this is the kind of place where guests are more likely to kick back and relax in the peaceful surroundings. A night for two costs from £90 (i-escape.com).

For even more seclusion, plus a chance to stay closer to nature, what about a wooden lodge in a quiet valley north of Limassol? 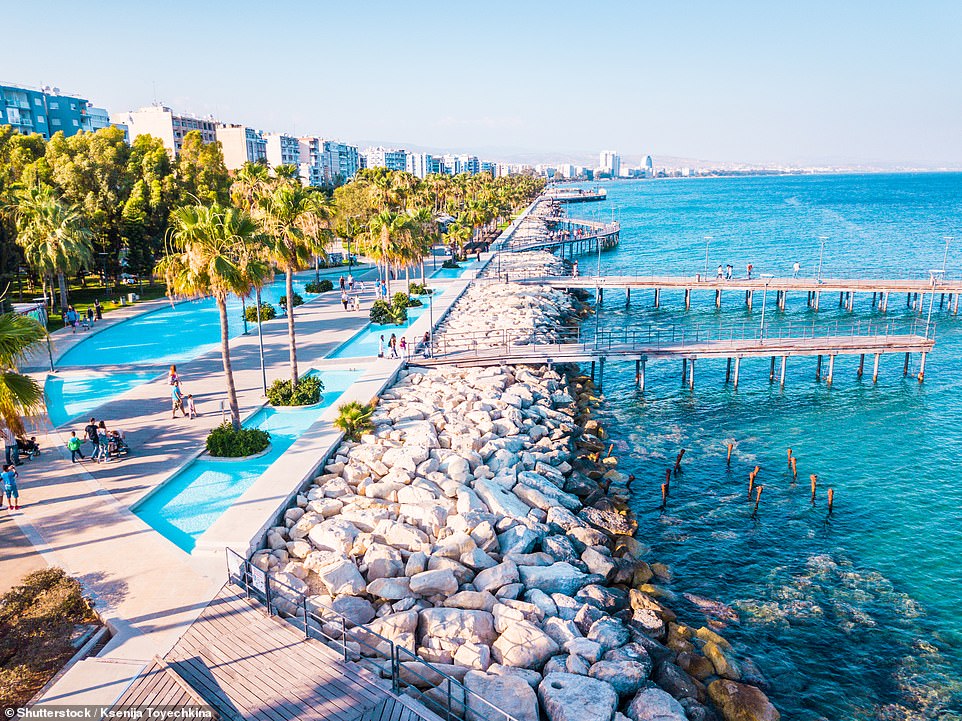 For those who don’t fancy lively Limassol, pictured above, head to a cosy cabin near the village of Agios Mamas

With country views and hiking trails from the door, this simple but cosy cabin near the village of Agios Mamas is perfect to get away from it all. Ideally, you should be a cat lover, as Panicos, who built the cabin (and lives next door) has a whole gang of them. He also has a lovely pool which guests can use, and will ensure you get the best treatment in his local bars and restaurants. It costs £39 a night, plus cleaning and a service fee (airbnb.co.uk).

Wine lovers should head for the hills west of Agios Mamas, where as well as olive trees surrounding the quaint cobbled village of Vouni, there are plenty of vineyards.

You can sample both local delicacies around your private pool when you stay in either The Lookout or The Hideaway, which each sleep two guests.

The appealing stone houses mix original features such as shutters and beams with modern bathrooms and kitchens. After you’ve finished the complimentary bottle of wine, visit some of the local vineyards for a few tastings.

The owners can arrange a supermarket delivery or you can walk into the village for a bite to eat. A night for two costs from £137 with a two-night minimum stay (furtherafield.com).

Best for families and small groups 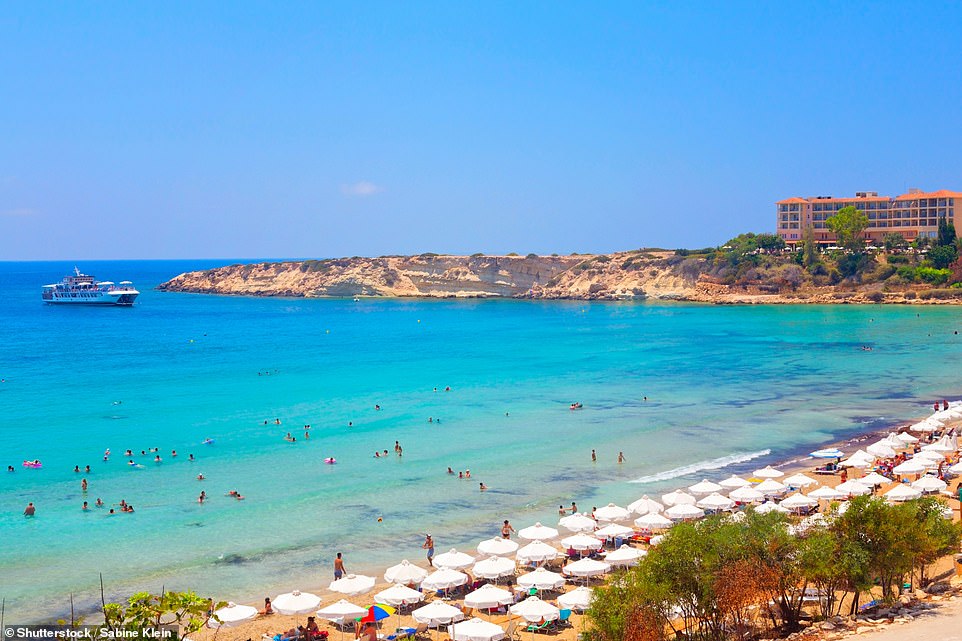 Soak up the sun: Coral Bay near Paphos (above) is known for its golden sandy beaches and sea caves

Active families and friends will be spoilt for choice when staying at one of the many properties at the Aphrodite Hills resort in Cyprus, between Paphos and Limassol.

Play golf on a PGA course with amazing views, go riding, enjoy a game of tennis or just relax in the spa. As well as one-bedroom apartments for couples with self-catering facilities, there are different-sized villas suitable for families.

The kids can enjoy soccer school or the tennis academy and, if you don’t fancy cooking, order in-villa catering or try one of the 18 restaurants and bars on the sprawling resort. A week in August costs from £1,310pp in a two-bed villa with private pool, including flights and car hire (jet2holidays.com).

Family getaways can be expensive, so it’s good to know that Olympic Holidays has some great places to stay that won’t break the bank.

For instance, a week in the school summer holidays at Hibiscus Villa near Protaras costs from £625pp, with flights, based on seven people sharing (olympicholidays.com). For that price you’ll get your own pool, four simple, modern bedrooms, an open-plan living area and air conditioning. Set in a gated cul-de-sac, Hibiscus is within walking distance of a sandy beach.

Prefer something a bit swankier in the same area? Look no further than the designer’s dream that is three-bedroom Villa Sunset, a medley of greys and whites with everything you could possibly want for a fun stay.

Huge patio doors open to create an enormous space in which the living room merges with the deck and pool. There’s a built-in hot tub, sunset bar, beanbags round the pool, outdoor kitchen with two barbecues, trampoline, football goals and ping-pong table. 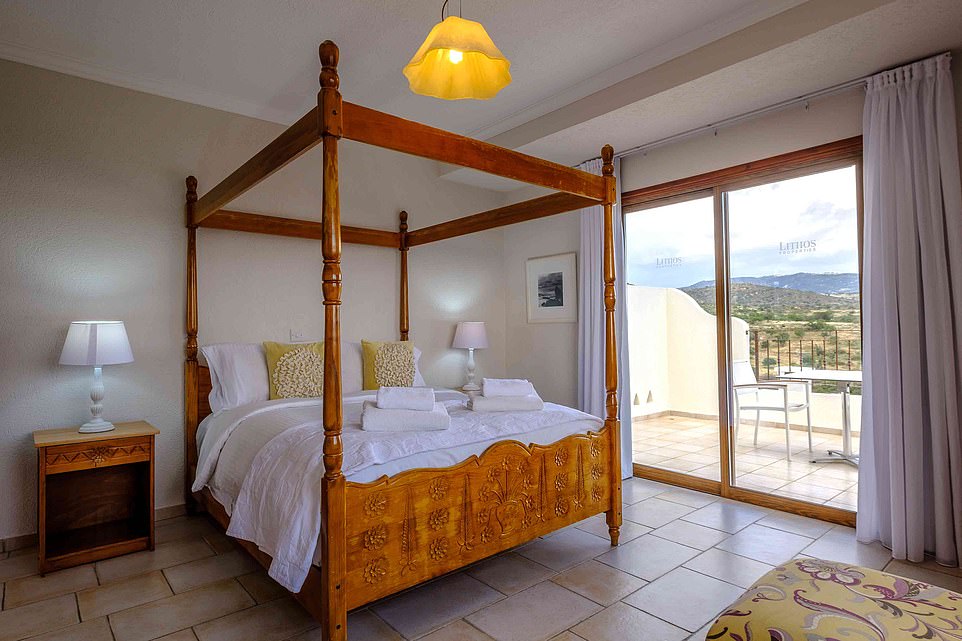 Uber-stylish: Villa Palati has three bedrooms, a rustic-chic living room and an infinity pool with a built-in bar

The large television even rotates so you can watch it from the pool.

Protaras, on the south-east coast, is near lively Ayia Napa if you fancy a night on the town, though you may just want to stay in your own exclusive party pad. A week for six costs from £2,156 (splvillas.com).

Another uber-stylish stay can be found on the other side of the island on a small development of 11 properties just outside Peyia village and near Coral Bay, with its sandy beaches and sea caves.

At Villa Palati, the infinity pool has a built-in bar, there is a sauna as well as a hot tub, and a pizza oven along with a barbecue. With three bedrooms, Palati comes with the kind of kitchen you’d love to have in your own house, and a rustic-chic living room.

Hit the beach, head to the Adonis Baths Waterfalls, or see the Roman mosaics at Paphos. A night for six costs from £137 (coolstays.com).

Best for groups of more than six 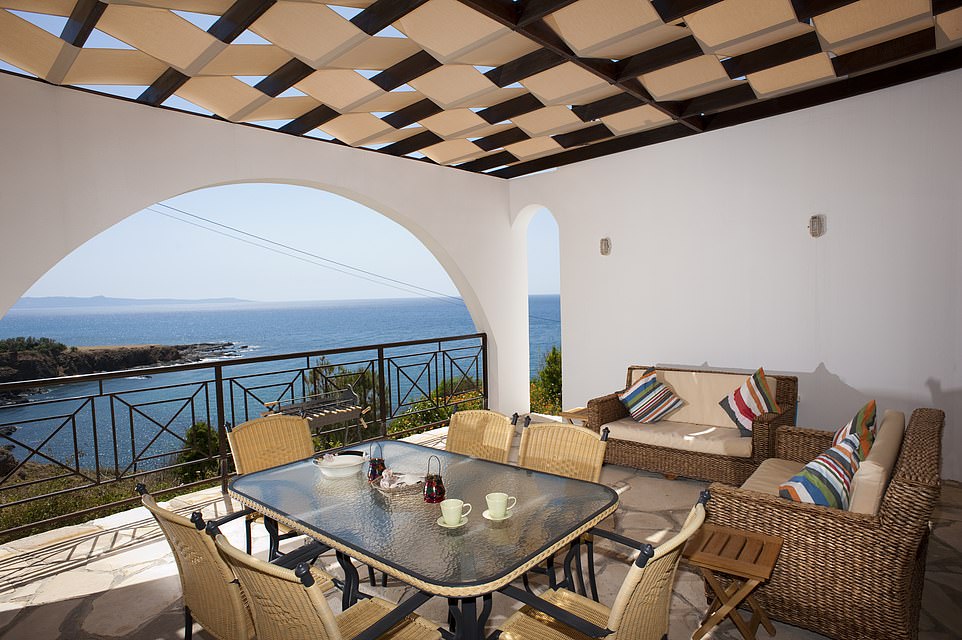 Dramatic: The view from Villa Buffavento, which has three bedrooms and a simple contemporary style

Pine-scented mountain slopes run down to craggy black cliffs at the northern end of Chrysochou Bay near the fishing village of Pomos, which is where you will find the villas Buffavento and Stella Maris.

On a rugged promontory with dramatic views to Akamas National Park, they share a large private pebble beach where, once you’ve navigated the 140 steps, you may see turtles laying eggs or rare monk seals. Go snorkelling in the sea or swim in the private pool that belongs to each villa. Inside they are identical, with three bedrooms and a simple contemporary style. Rent them both and you can travel with extended family or friends but still retain your privacy.

Expect sublime sea views from the hot tub, terrace and most of the rooms at the Pomos View Villa, which overlooks the pretty fishing village. 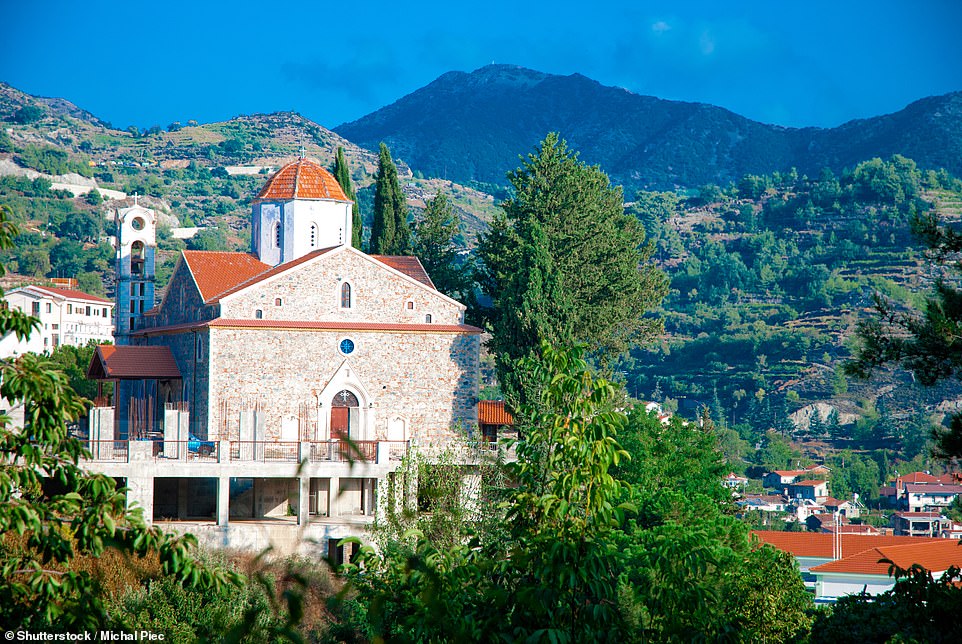 Want to explore? Visit the Troodos Mountains (pictured) or venture to the Akamas nature reserve

Swim in the pool, dine under the stars by the barbecue area, or watch a movie in the cinema room. The stone villa sleeps eight in four colourful rooms, and costs from £1,344 a week (oliverstravels.com).

If you prefer a game of tennis once the sun goes down, Sea Pines, in the same area, comes with a floodlit court as well as a 14m pool. With an impressive open-plan living and dining area with a traditional tiled floor and wooden roof, it sleeps eight in three bedrooms and costs from £2,194 for a week (vintagetravel.co.uk). From here you can walk among the pine trees, take a day trip in the Troodos Mountains or explore the Akamas nature reserve.

For something even more swish, take a look at Villa Azure, which Frank Tiebosch, the director of Cyprus Villa Retreats, says is the most amazing place he has seen on the island during seven years of business.

Unsurprisingly, it is often used in TV shows – it has featured in the Hungarian version of Love Island and a German television crew is moving in during April to film a similar series. A ten-minute drive from the buzz and beaches of Coral Bay, it comes with a massive 22m by 8m pool, surrounded by beautifully manicured lawns and with terraces for outdoor eating. 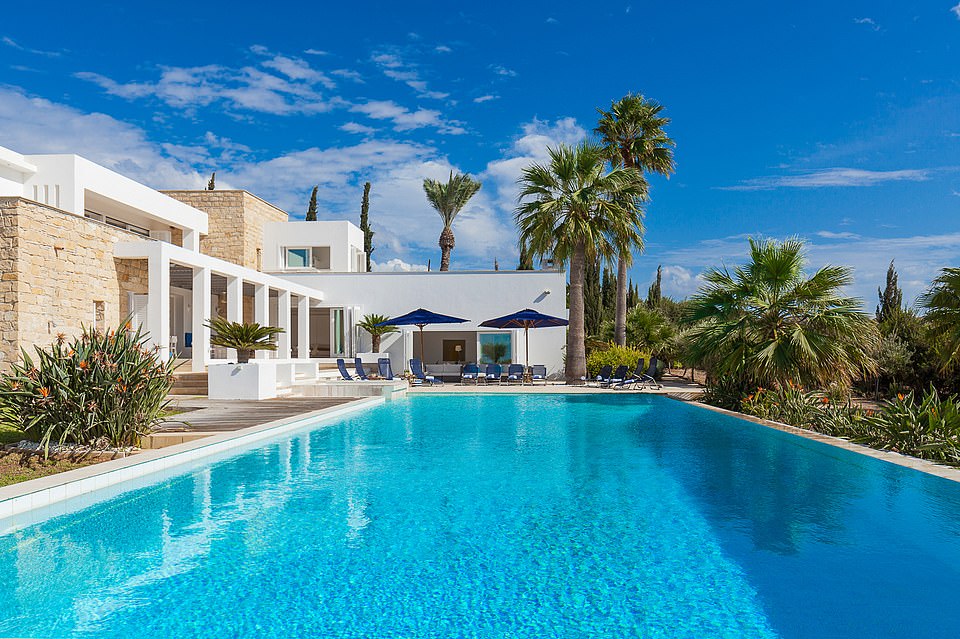 Frank Tiebosch, the director of Cyprus Villa Retreats, says Villa Azure is the most amazing place he has seen on the island during seven years of business

Inside, its three floors have been kitted out with every comfort, with two ovens and dishwashers in the kitchen and six bedrooms with blue-and-white bedding. Not that you need to make your own bed – there is daily maid service. A week for 14 costs from £7,000 (cyprus-villa-retreats.com).

Similarly stylish and just steps from the sea at Vardas Beach, the chic twin properties Vista and Lara each sleep 12 guests in six rooms. With floor-to-ceiling windows and a hot tub on the rooftop, each one looks like it’s straight out of an architect’s sketch pad. Swim in the clear sea or in the pool, walk to the local bars and tavernas, then fall asleep to the sound of the sea. Take the family, as pop star Peter Andre did, or for a real celebration, book both and travel with up to 24 guests. A week for 12 costs from £5,500 (cyprus-villa-retreats.com).