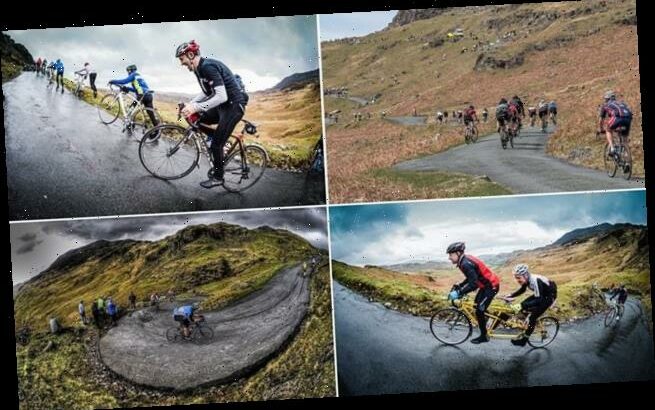 The joy – and agony – of completing the toughest cycle ride in Britain, which includes a hill so steep there’s a danger of toppling backwards (and riders face it on the 94-mile mark)

Me: ‘I’m cycling in the Lake District on Sunday.’

Mate: ‘Sweet – where in the Lake District?’

That’s the allure of the 113-mile Fred Whitton Challenge, a one-day circular cycle ride held every May – it takes in pretty much the whole of the Lake District, including every significant Cumbrian col. 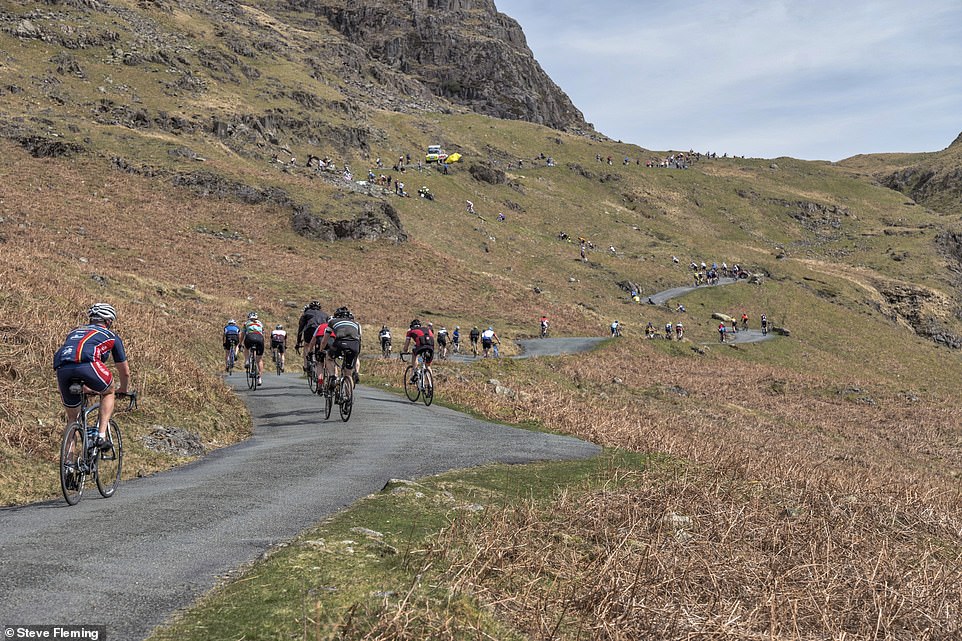 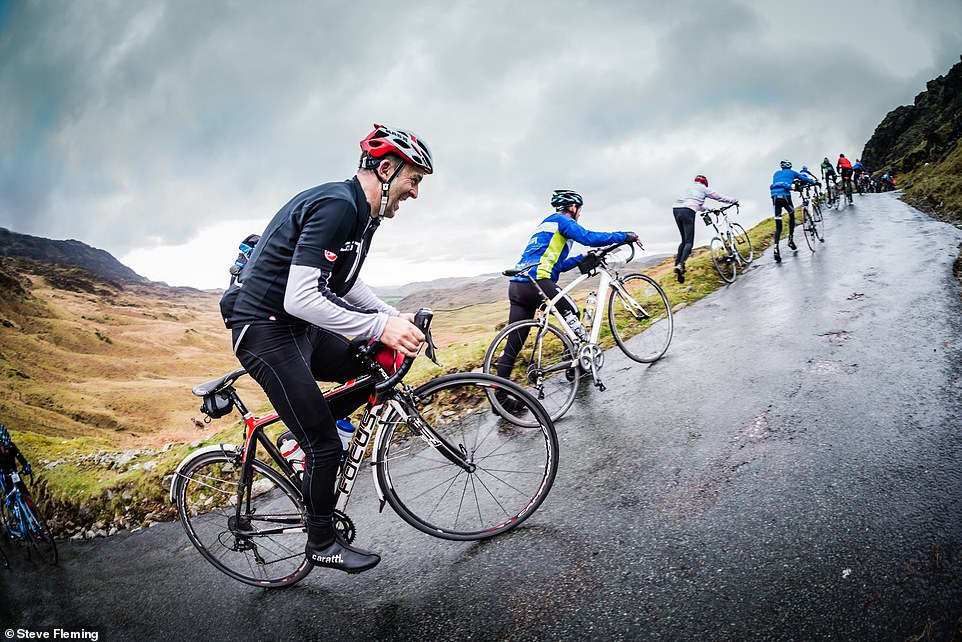 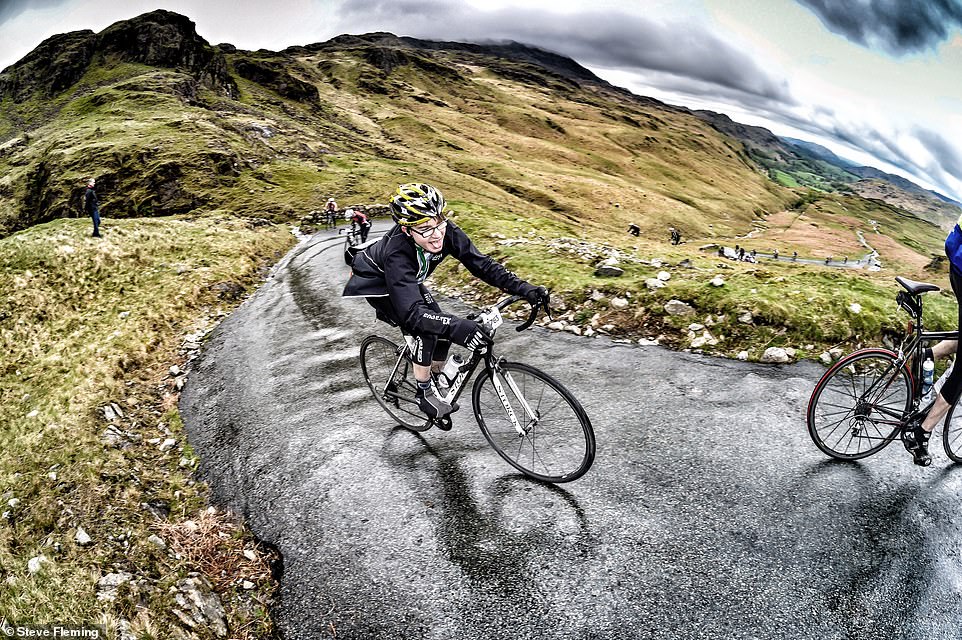 Josh Reid panting his way up Hardknott Pass in 2015. He has completed the challenge four times

The ‘Fred’ was canned last year due to Covid but so long as lockdown eases it will be making a charity-boosting comeback this May.

‘We are putting precautions in place to ensure we can deliver a Covid-19 safe event,’ promise the organisers so that ‘everyone has an epic and enjoyable day out in the Lake District’.

Epic is a given, but whether it’s enjoyable will be in the thigh of the beholder.

After 94 punishing miles, with the climbs of Kirkstone and Newlands behind you, your jelly legs somehow have to drag you up Hardknott Pass, which vies with Rosedale Chimney in North Yorkshire as England’s steepest road. 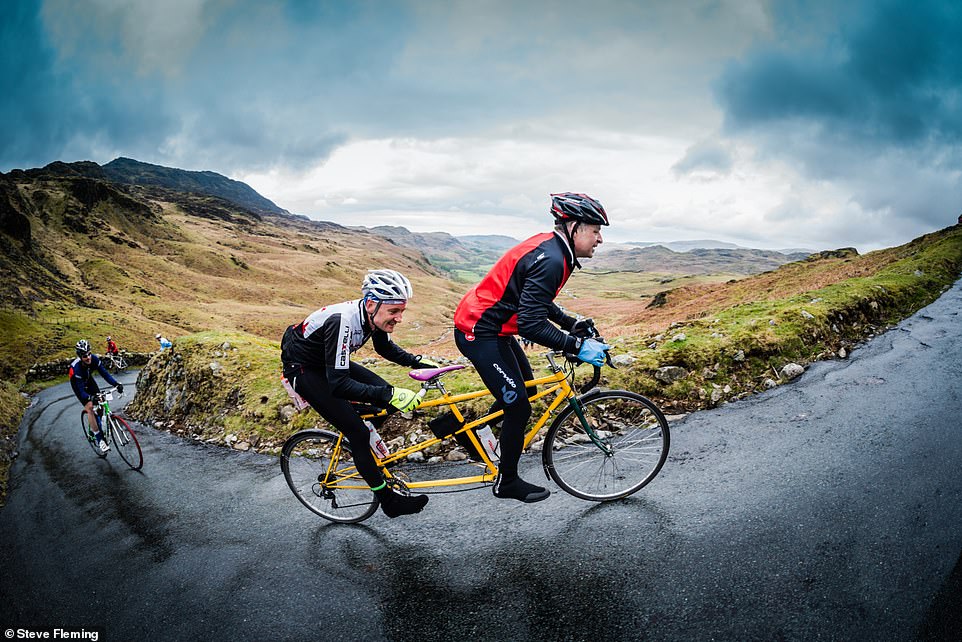 Hardknott Pass includes a section with a 30 per cent incline. But that doesn’t stop some tackling it on a tandem 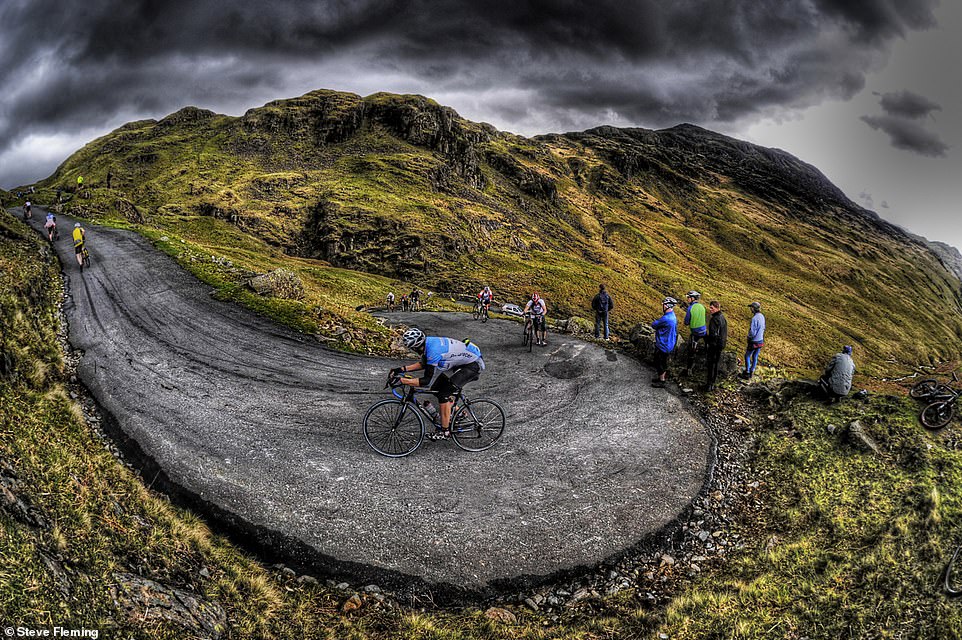 Whether the Fred Whitton Challenge is enjoyed, says Josh, is ‘in the thigh of the beholder’. Pictured here is a Hardknott Pass hairpin

Road signs warn that several of the Hardknott steeps – including, crushingly, one long one at the beginning and, painfully, two shorter ones near the summit – are ’30 per cent’ in gradient. These one-in-three ramps are so vertiginous that if you don’t keep your weight over the handlebars, you’ll pull a wheely and topple backward.

Keep riding – edging the bike from side to side in a pain-soaked wobble – and you’ll soon hear the tippity-tap of hardcore cyclists walking up Hardknott’s thin strip of tarmac in expensive clip-in cycling shoes.

Event photographer Steve Fleming captures the valiant few still stop-motion pedalling, their brains and brawn battling gravity, faces scrunched in agony. Cresting this climb at 1,289ft still ‘clipped in’ is a life goal for even the strongest of riders. 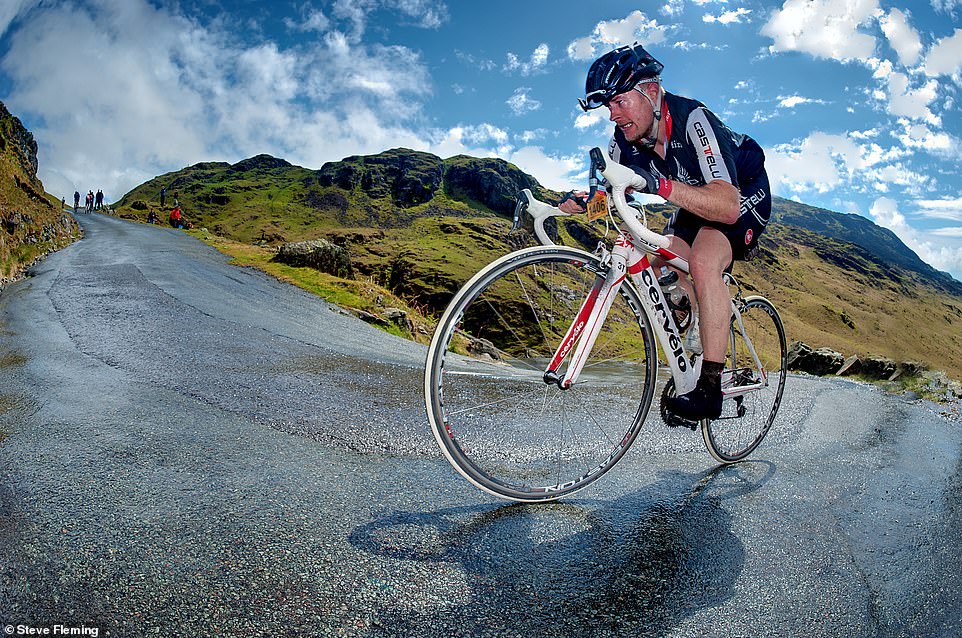 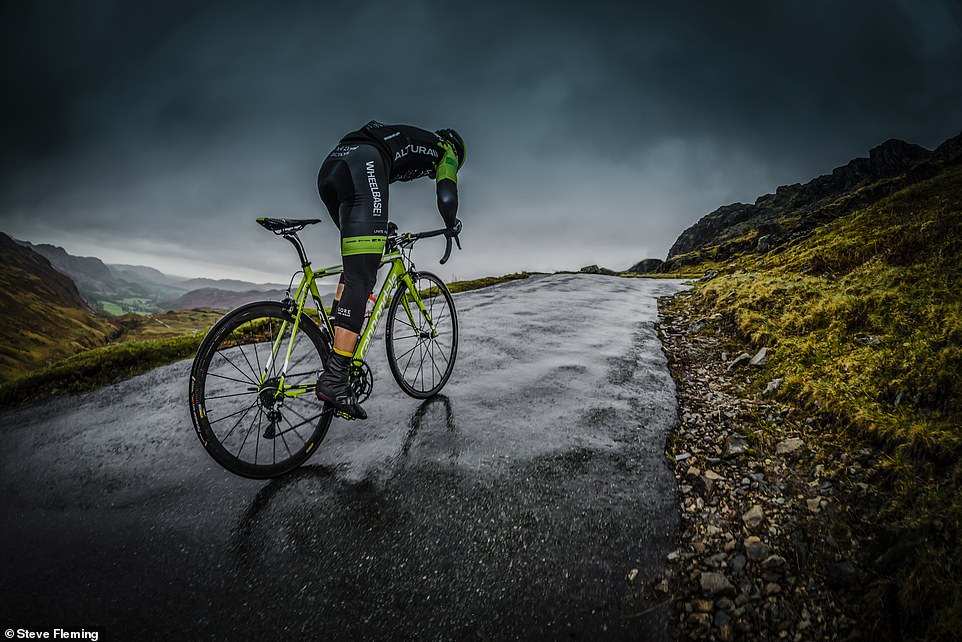 Pictured here is local lad Stuart Reid, who normally finishes the Fred Whitton Challenge in first or second place. His best time is 5 hours 45 minutes. Josh’s best time – and he once rode a bicycle from China to Newcastle – is six hours and 46 minutes 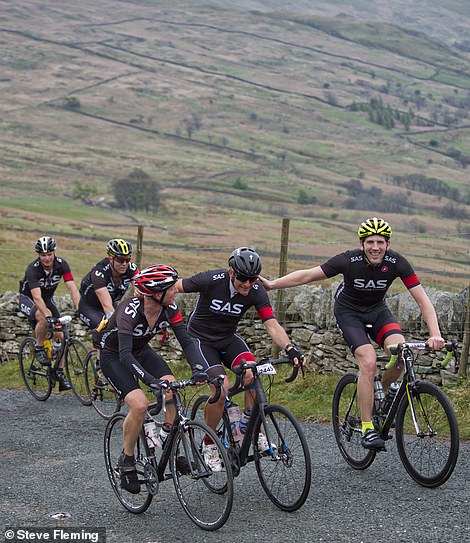 The Fred is famously, brutally, masochistically tough, yet Hardknott isn’t even the final climb. There’s Wrynose to come before you can start to wonder how you’ll possibly manage the flattish last 15 miles into Grasmere.

You’ll laugh through tears of pain at the adjective ‘flattish’ and you won’t be thinking about the town’s world-famous gingerbread.

Staged since 1999, the Fred is now a Lake District tradition, capped for safety reasons at 2,500 riders. All proceeds from the event, run in the memory of former Lakes Road Club racing secretary Fred Whitton who died in 1998 of cancer at the age of 50, are donated to charity. Riders paying £40 each to be part of the event have so far raised a stonking £2million, the bulk of it for Macmillan Cancer Support.

The Fred was the first ‘sportive’ in the UK. A sportive is a paid-for long-distance mass participation cycle ride with event marshals, food stops (oh, boy, will you be glad of those), and no winners. 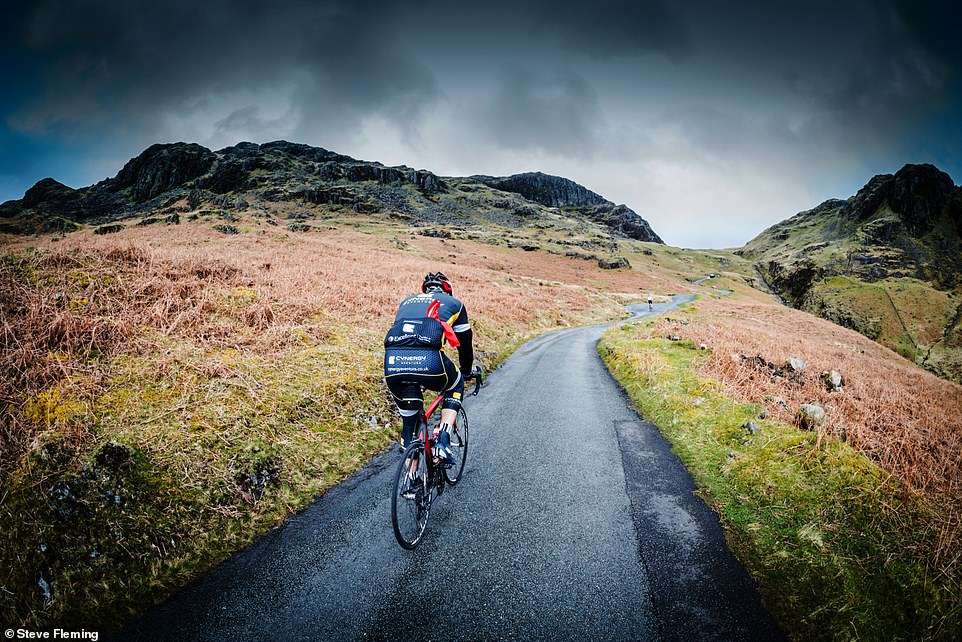 Slog: This Fred Whitton Challenge rider has it all to do on Hardknott Pass, which comes at the 94-mile mark 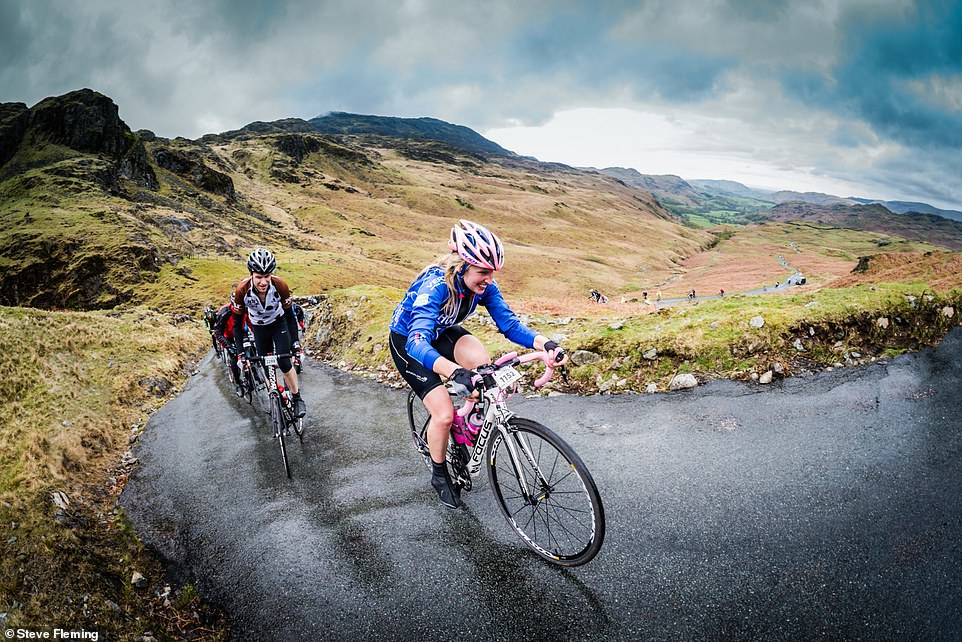 ‘Hardknott’s one-in-three ramps are so vertiginous that if you don’t keep your weight over the handlebars, you’ll pull a wheely and topple backward,’ warns Josh 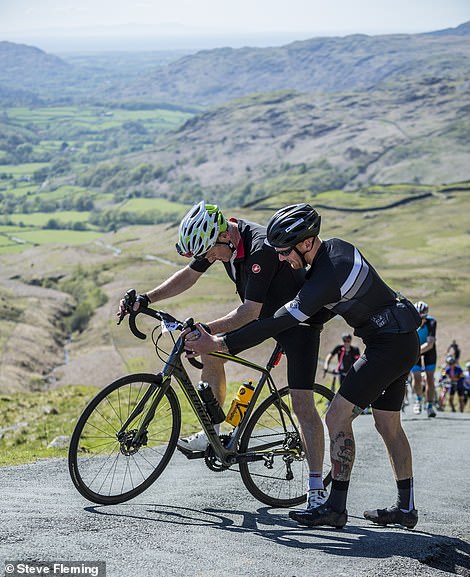 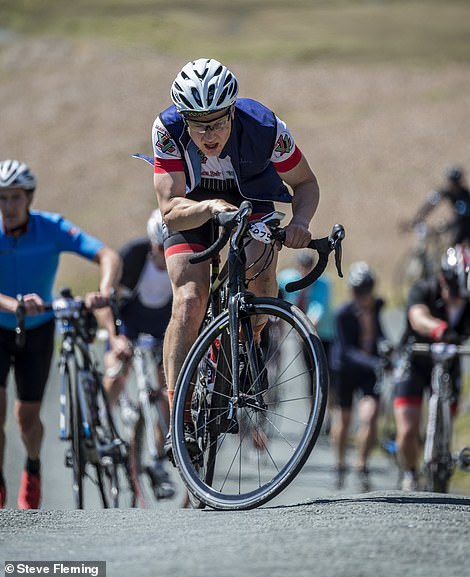 On the left, a rider receives assistance on Hardknott Pass, while the image on the right illustrates the exertion needed to conquer it

Some folks take 12 hours to finish the 113-miles; whippets like Rob Jebb and local lad Stuart Reid – no relation – complete it, improbably, in less than half that. Rob and Stuart are the event stalwarts, usually finishing either 1st or 2nd most years.

Unlike sportives in France, such as the Tour-de-France-linked Etape du Tour or the 43-year-old Cape Town Cycle Tour in South Africa, which are held on closed roads, most UK sportives – including the Fred – are held on public roads open to all traffic. 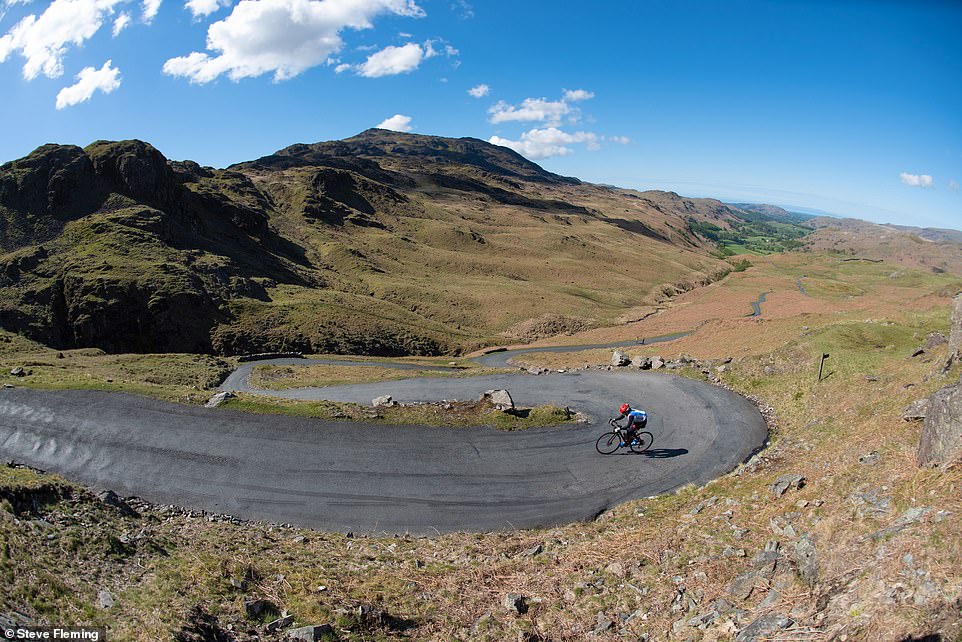 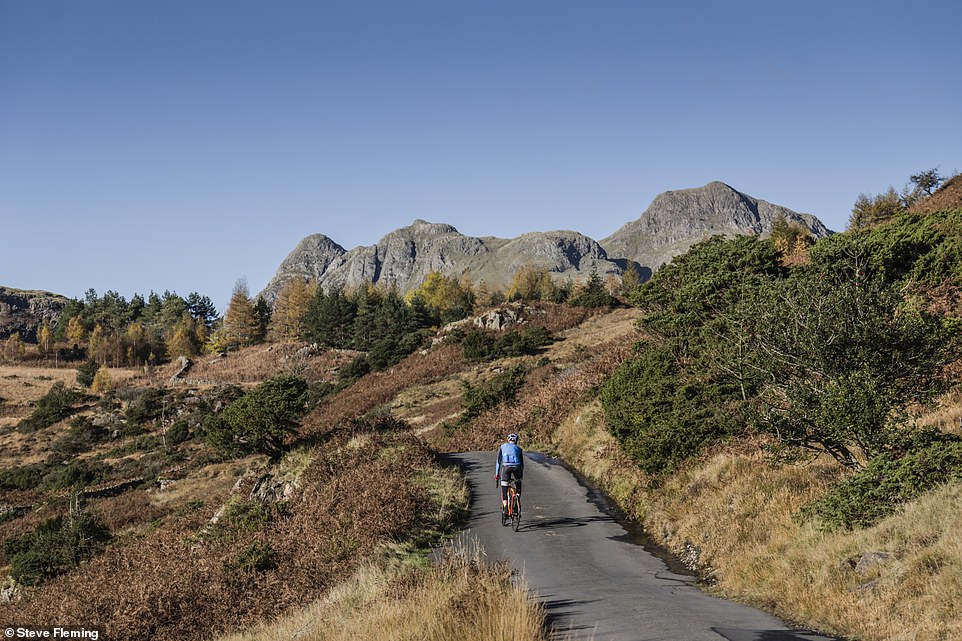 A Fred Whitton rider hauling himself up a hill in the Blea Tarn valley, not far from the finish line at Grasmere 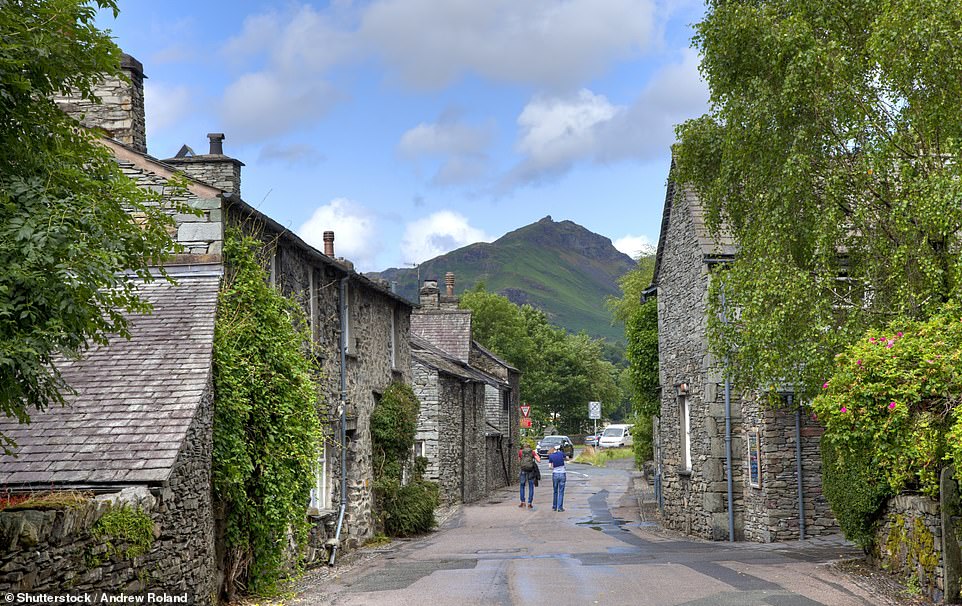 The 113-mile Fred Whitton Challenge is a one-day circular cycle ride held every May that takes in pretty much the whole of the Lake District, including every significant Cumbrian col. Pictured is the start and finish point – Grasmere 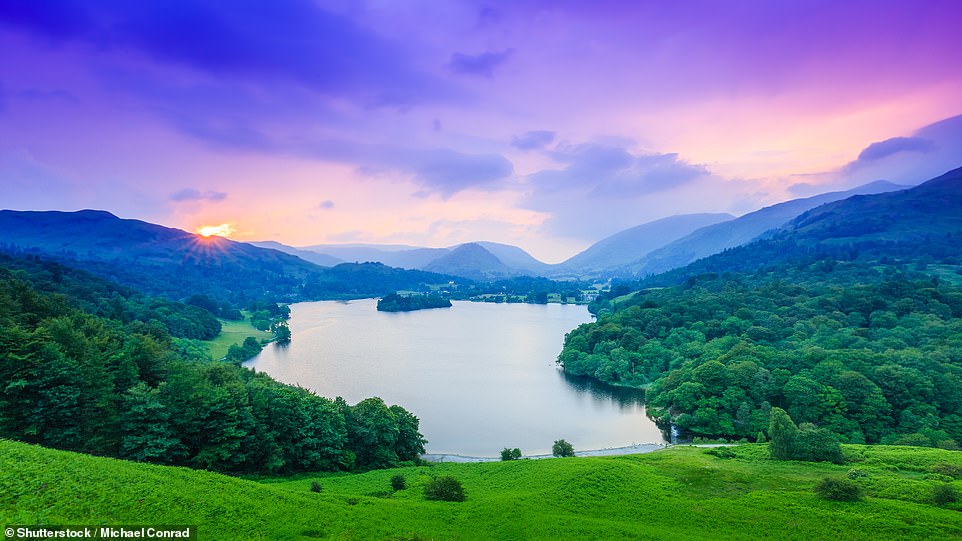 A beautiful sunset at Grasmere, which is one of the Lake District’s most eye-catching spots

There’s nothing stopping you from riding a sportive without paying the entry fee, but there’s joy in zip-tying an official number to your handlebars. Some of the younger riders – you have to be 16 or older – keep these numbers attached all-year-round, a badge of achievement.

It’s also possible to ride the route of a sportive on any day of the year, but, again, there’s joy in joining with others in simultaneous pain.

Even though you’ll be clapped-out by the end, it’s uplifting to be applauded and cheered at the finish.

The finish. Joy. Relief. Your legs will be screaming, but you somehow summon enough energy to collect a finishers’ medal, a sweet hot drink and a cake (or two) and collapse in a heap, promising to never ride this event again. Until, that is, entries for the Fred open the following year, and you can’t help but sign up.

Pain is fleeting – there’s real pride in finishing a Fred, the toughest ride in Britain.

The 2021 Fred Whitton Challenge on Sunday May 9 is officially full, but many people (understandably) cancel, so there’s a fluid reserve list. A key challenge is booking accommodation in or near Grasmere (you don’t want to ride too far to the start, and car parking is scarce). Go Lakes and Stay In The Lake District have listings of Lake District cottages, B&Bs, and log cabins. There are few hotels in Grasmere, one Youth Hostel, and no camping except for an event-only campsite on the start field.