These mesmerising photographs are of tiny abandoned houses and churches in the region’s Apuseni Mountains.

The scenes captured have the atmosphere of a dark fairy tale. In the churches walls are decorated with torn religious paintings, rusty chandeliers hang from ceilings and wonky crosses outside point to the doorways. And the houses look similarly eerie, full of dust but with furniture and belongings still in place, as if the owners suddenly fled. 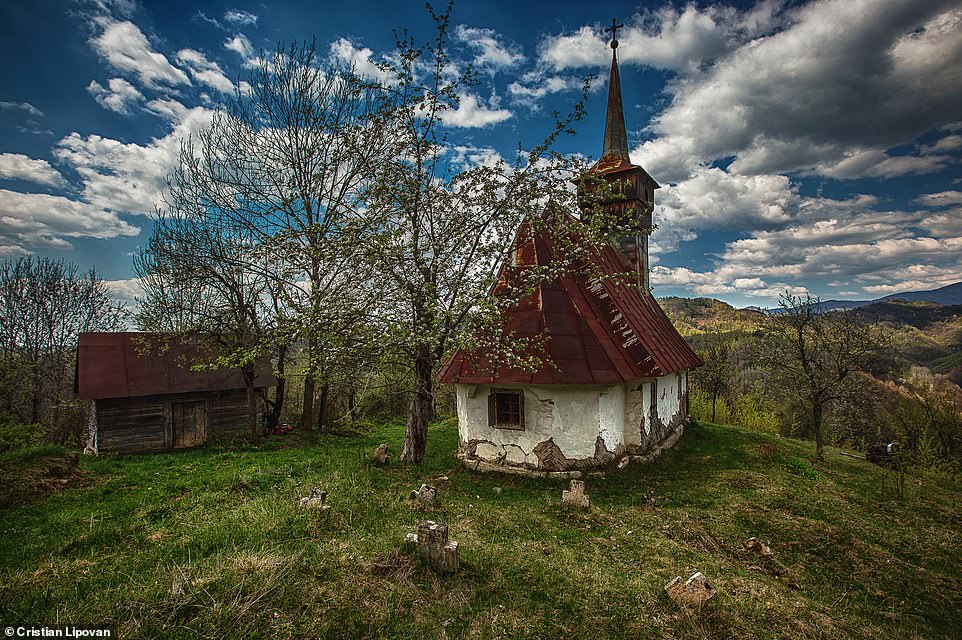 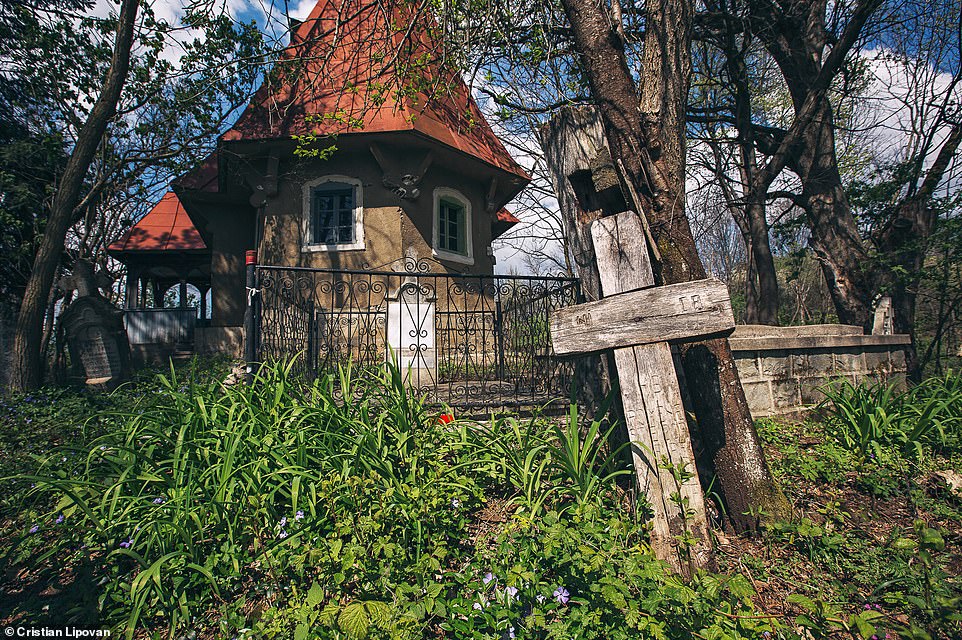 Eerie: The scenes captured by Cristian have the atmosphere of a dark fairy tale 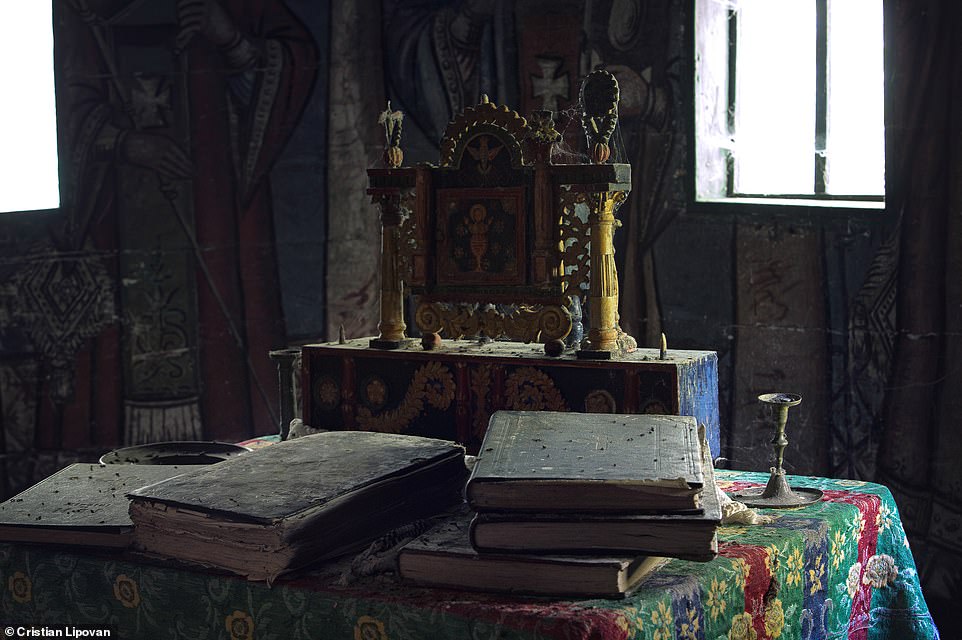 This is Cristian’s favourite image from the set of photographs he shot in the Apuseni Mountains. He said the scene reminded him of an Indiana Jones movie

The photographer, Romanian Cristian Lipovan, however, says that these places don’t scare him, because he ‘doesn’t believe in ghosts’.

The locations are simply fascinating for him, and he says that his favourite image reminds him not of a horror film, but an Indiana Jones movie.

He told MailOnline Travel: ‘All [of the photographs] are my favourites, but I have one that touches my heart. It’s a photo taken in one of the churches where you can see several very old religious books, dusty and full of spiderwebs that have been standing on the altar for decades.

‘This photo is like a screenplay from a movie with Indiana Jones. It always reminds me of movies with him.’ 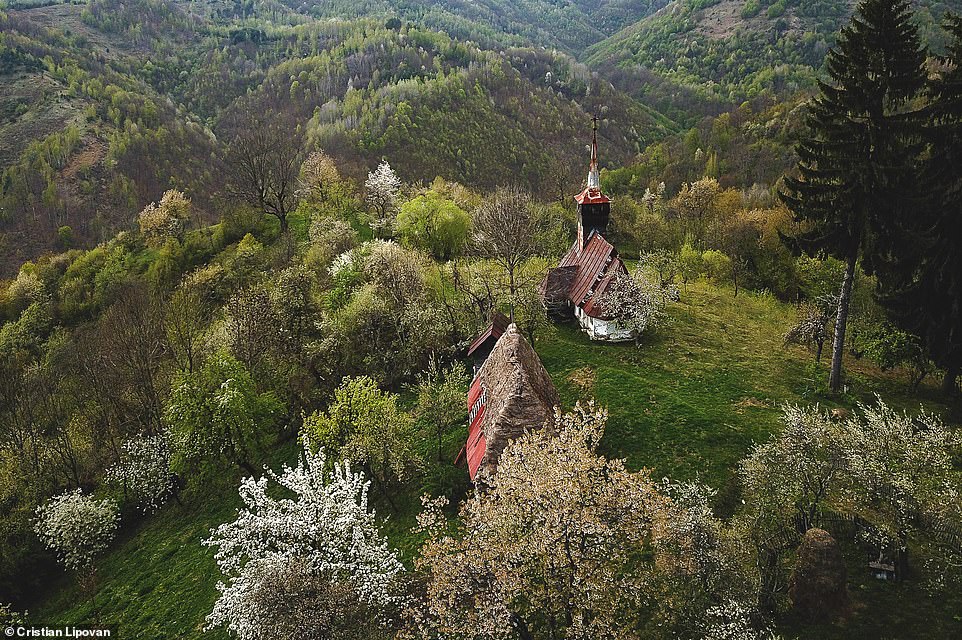 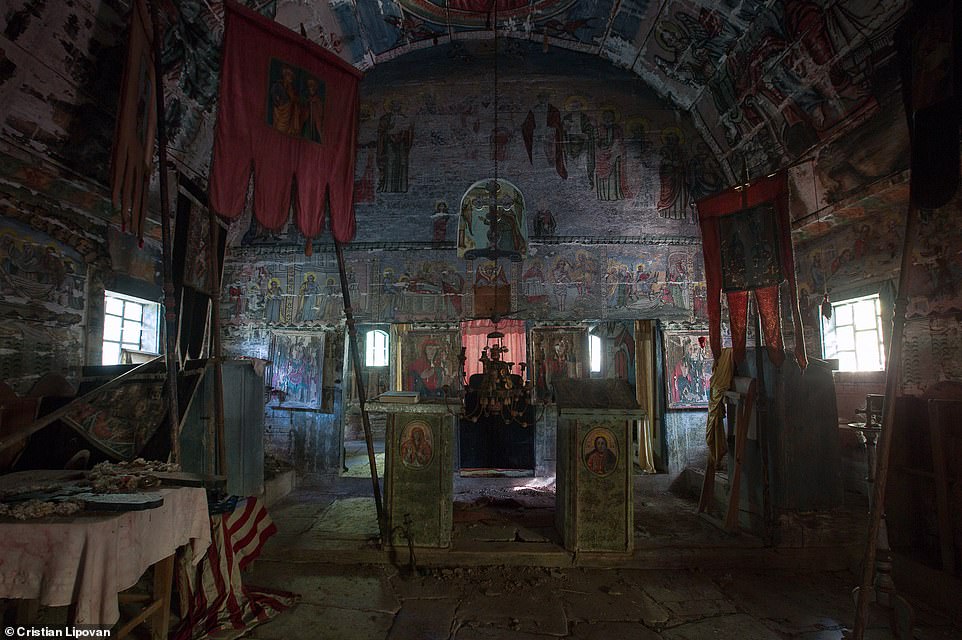 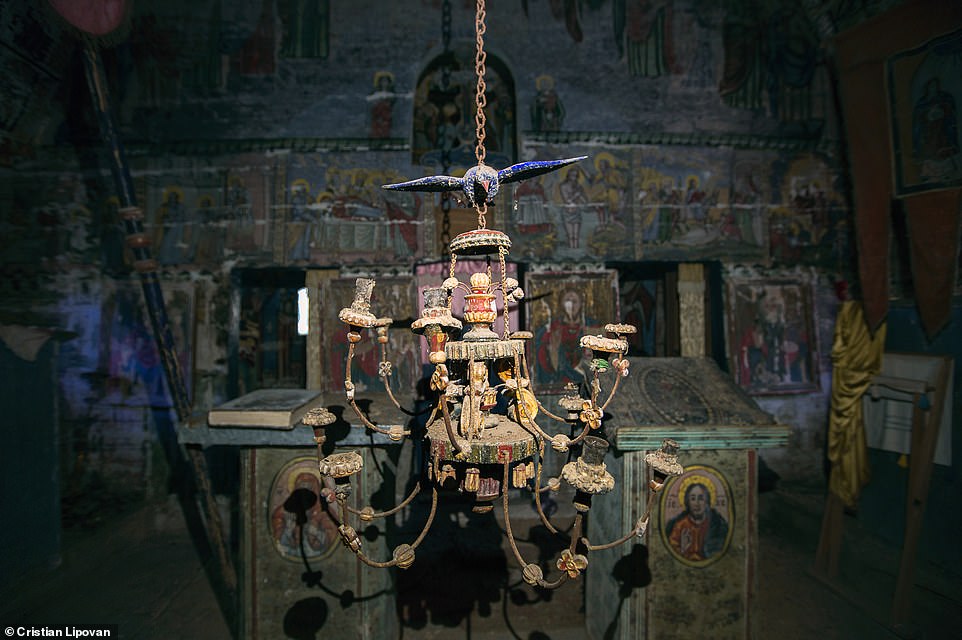 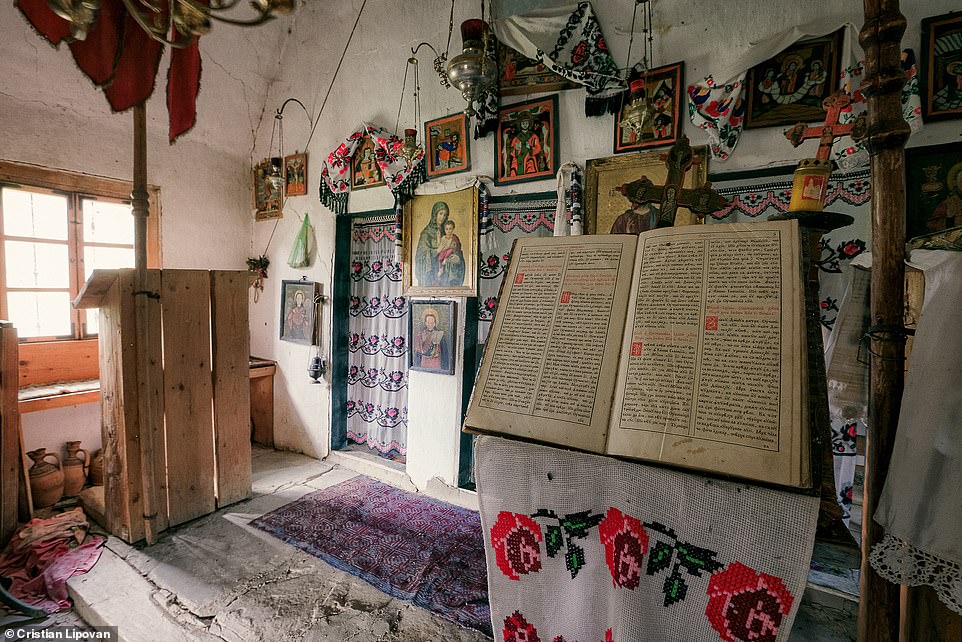 Cristian, 37, who lives in Cluj-Napoca, the unofficial capital of Romania’s Transylvania region, describes the abodes and places of worship that he discovered as ‘hidden treasures’ – and said that finding them required quite a bit of detective work.

He said: ‘I found these hidden treasures after a long time searching on the Internet and found information about them in very old maps, or from asking the old people from villages at the foot of the mountains. I discovered them after putting all this information together. Some people said that they had been hiding places for outlaws in ancient times.’

He continued: ‘I explored several smaller villages and three churches, all abandoned for many years. These churches are special, sacred places where you feel a special spiritual load. When you are inside you feel strong feelings that you can’t describe in words. 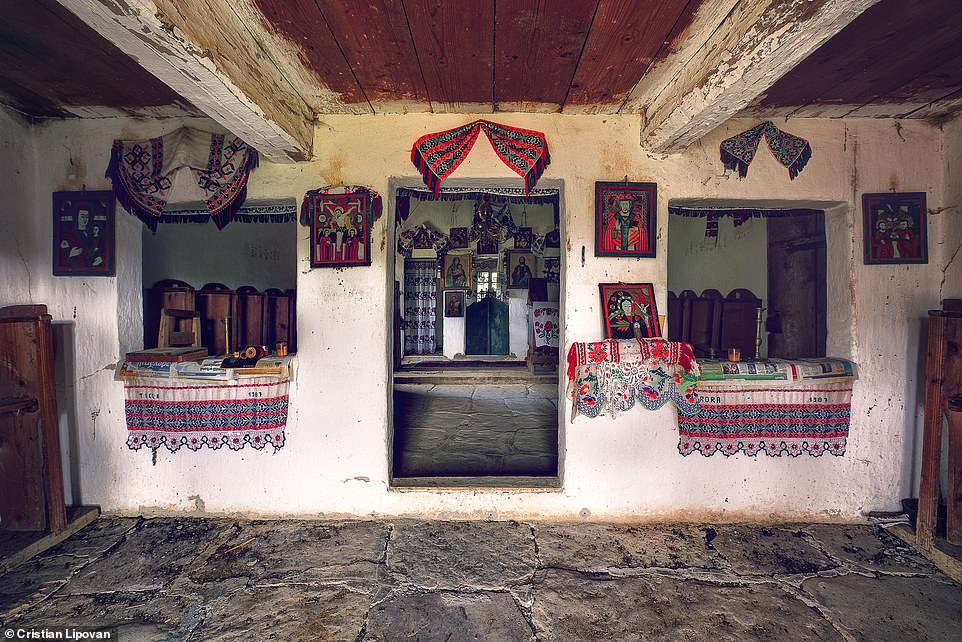 Cristian told MailOnline Travel that ‘these churches are special, sacred places where you feel a special spiritual load’ 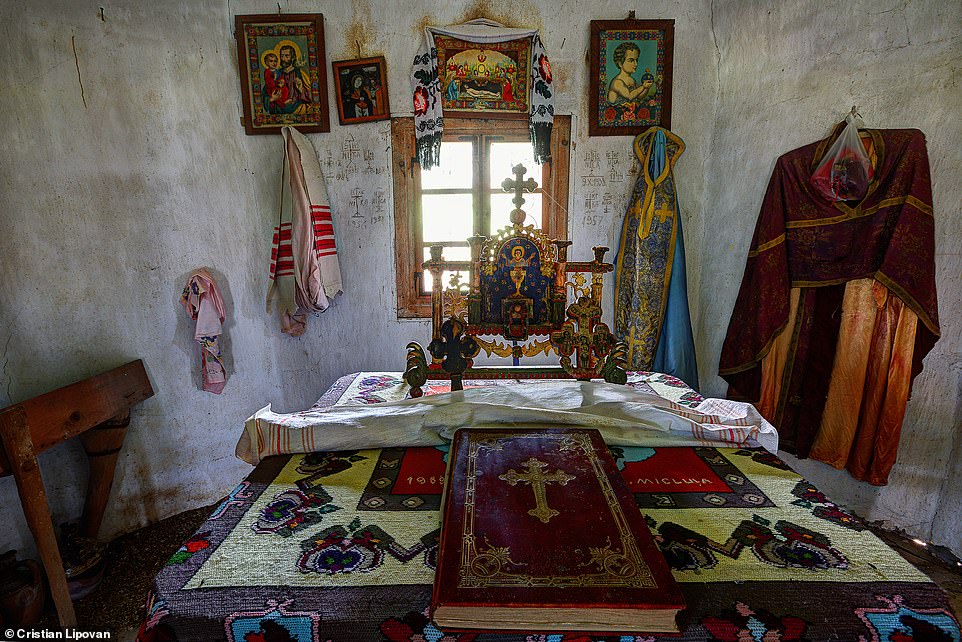 The churches contained items that have been untouched for decades, including priests’ robes and prayer books 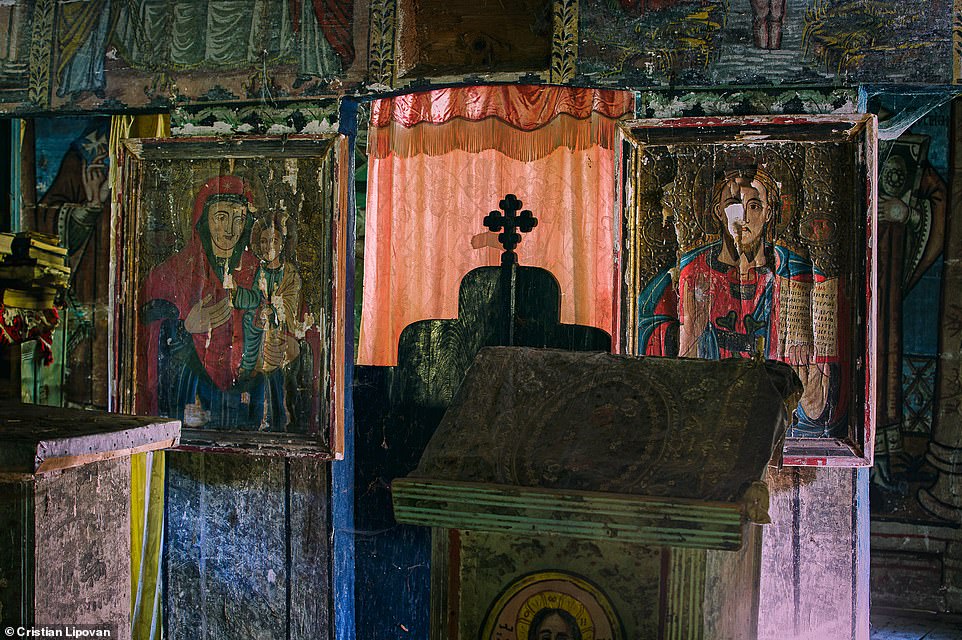 Lured in: Cristian explained that what draws him to abandoned places is their mysteriousness 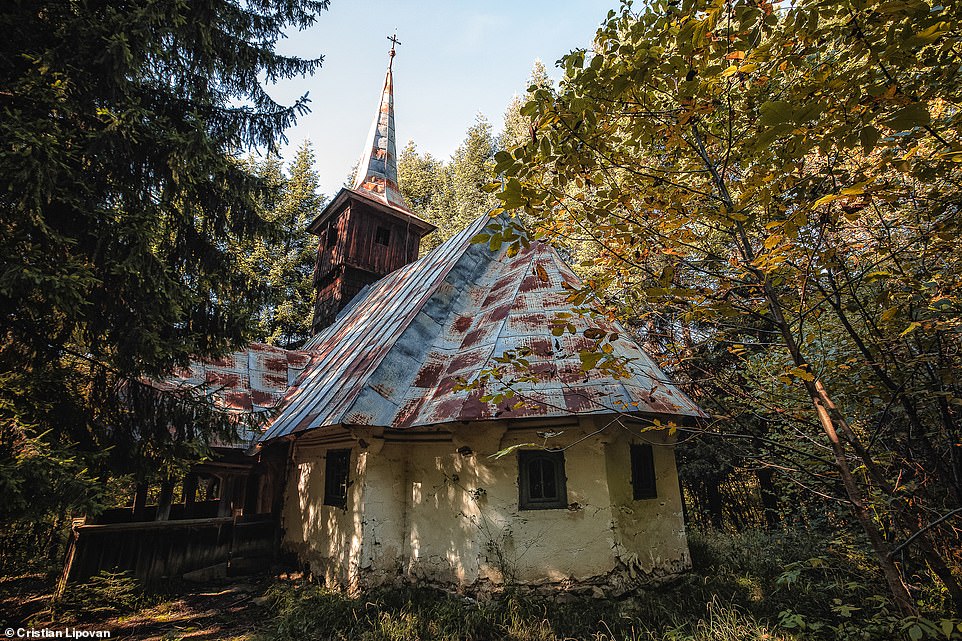 Cristian said: ‘The cemeteries of these churches are very old with graves covered by vegetation and overturned and broken crosses’ 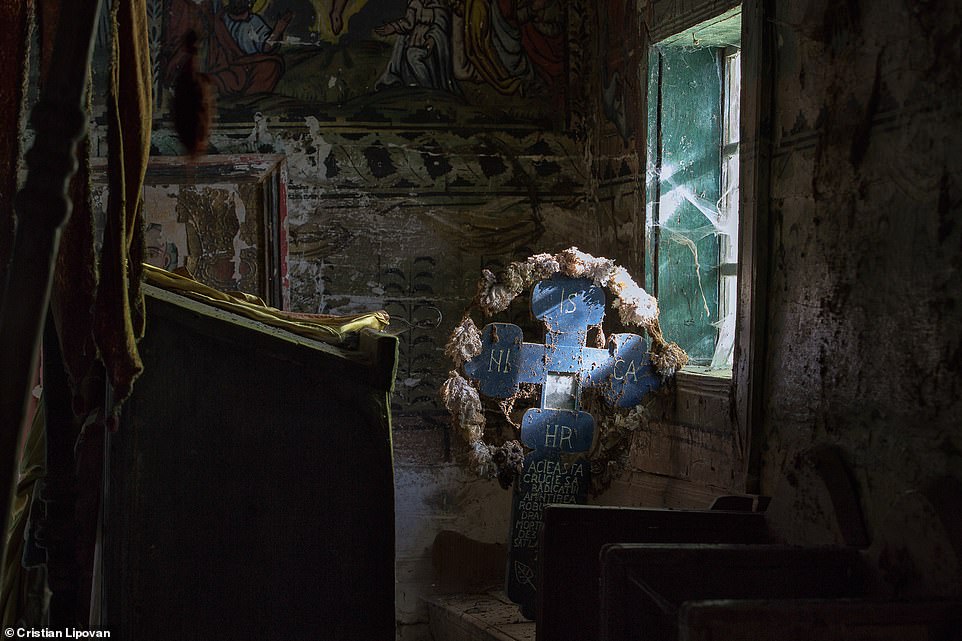 It’s thought that in times gone by, some of these buildings were used as hiding places by outlaws 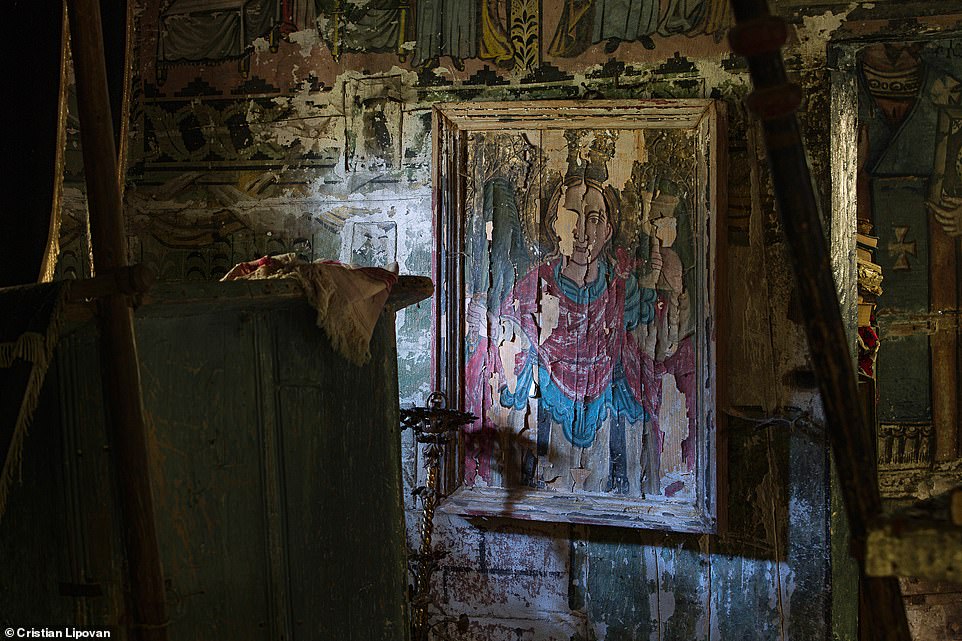 ‘I felt a kind of disappointment, actually, because I found very valuable things in a serious state of degradation and they can’t be saved.

‘The cemeteries of these churches are very old with graves covered by vegetation and overturned and broken crosses. In some houses, things were left as though the owners might return home at any moment.

‘I found things that have been untouched for decades, on which the dust and spiderwebs have settled. In the churches the paintings, painted furniture, prayer books in Cyrillic, the priests’ clothes and much more – it was dusty and very degraded.’ 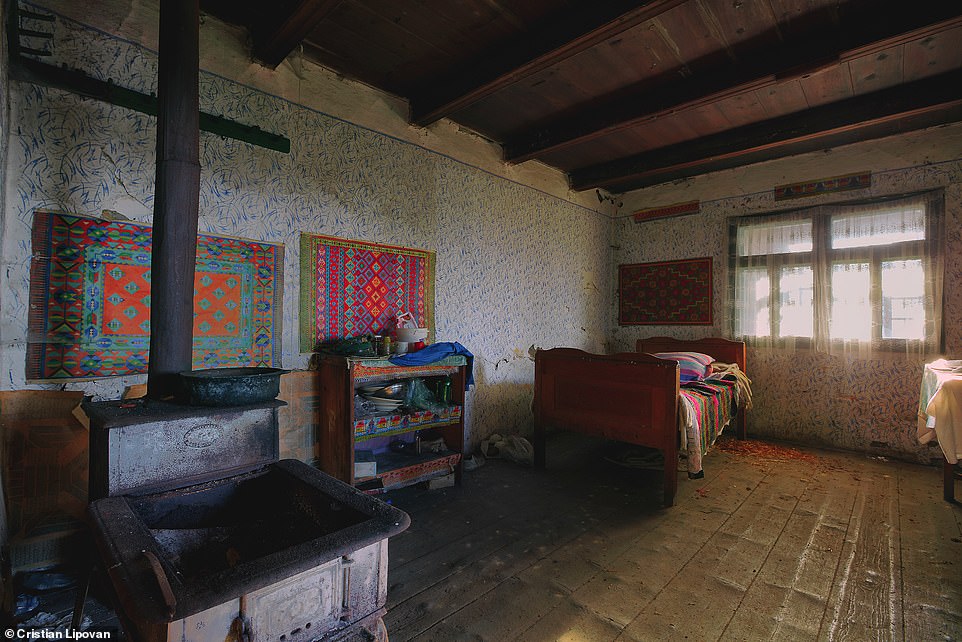 The interiors of the abandoned houses were largely untouched, with furniture and belongings still in place 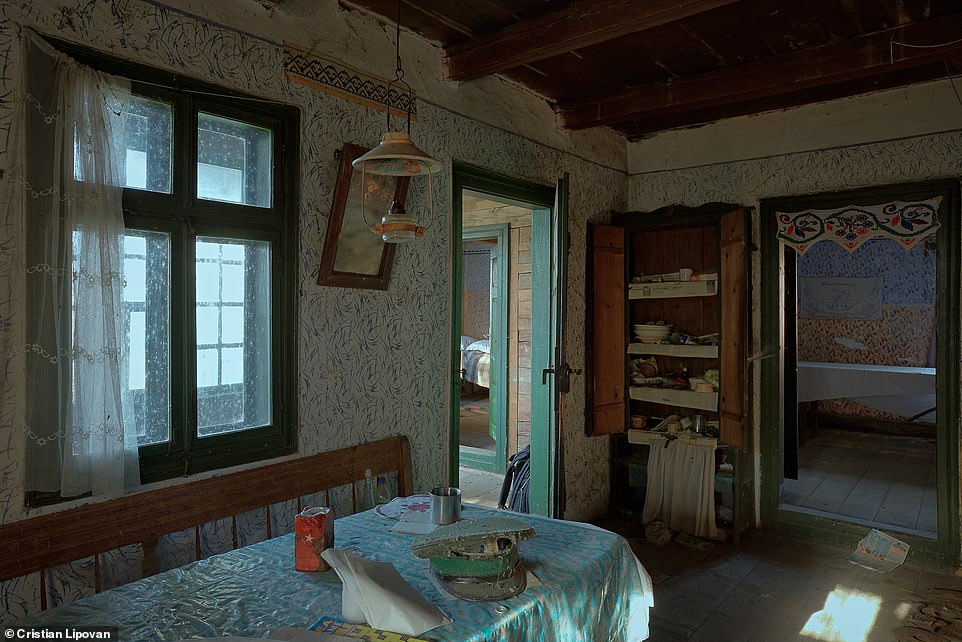 The abandoned houses, said Cristian, had the air of dwellings that the owners might return to at any moment 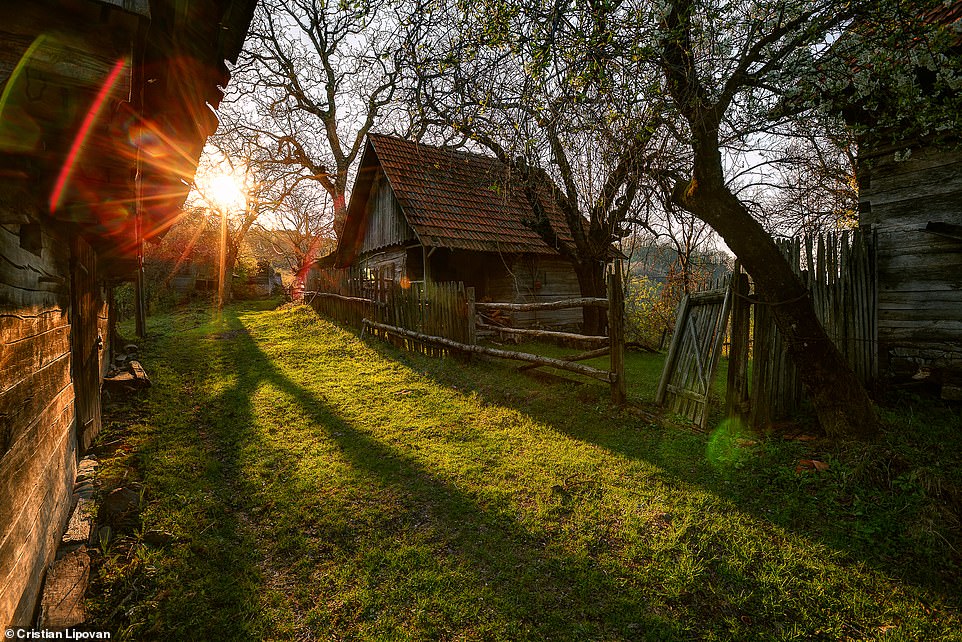 Let there be light: Sun rays illuminate the abandoned settlement, which here looks rather idyllic 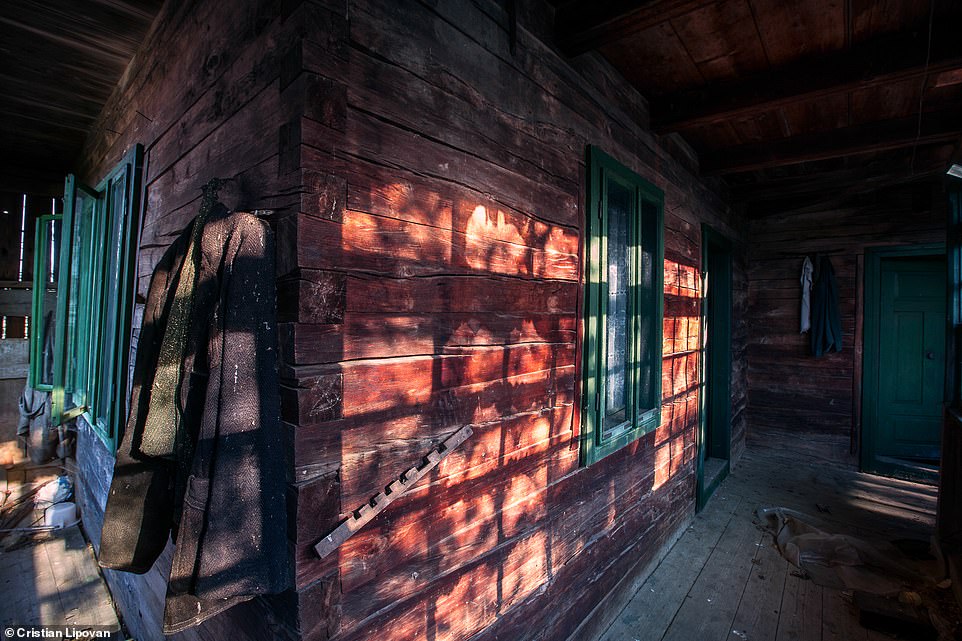 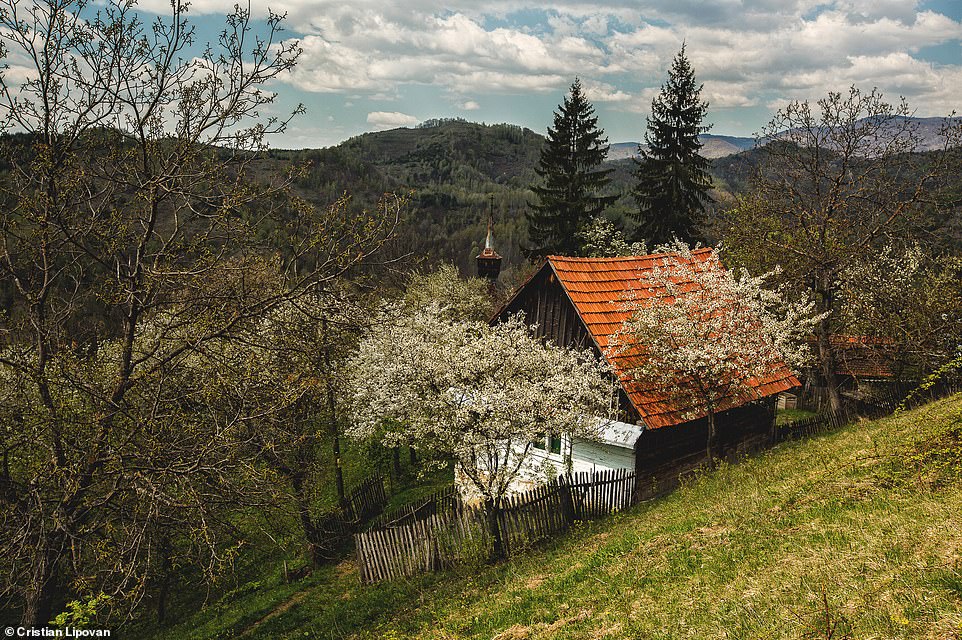 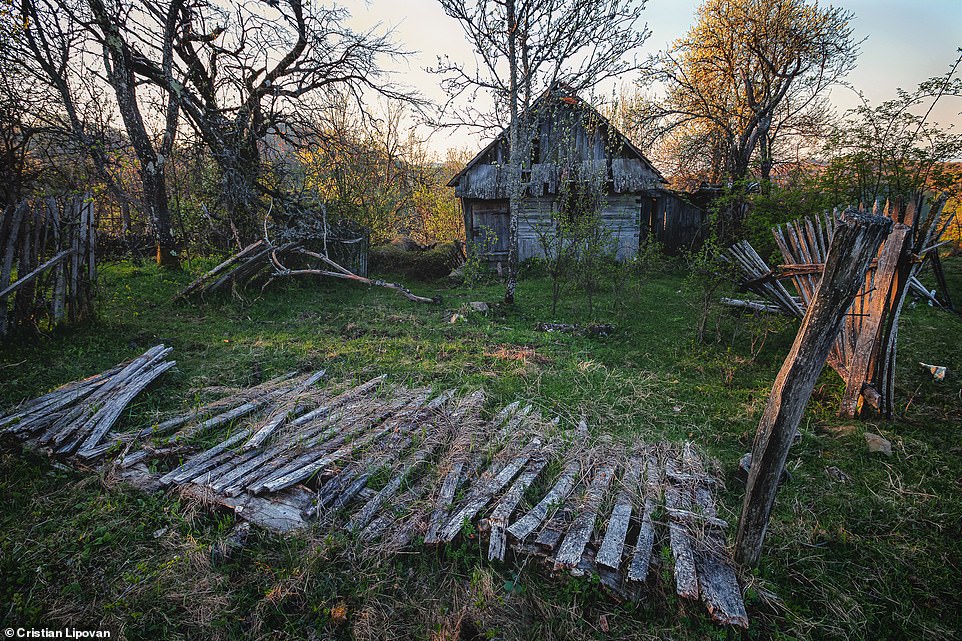 Cristian explained that what draws him to abandoned places is the mysteriousness of them – and the adrenalin rush he sometimes gets from creeping inside.

His favourite abandoned places so far are the contaminated ghost towns of Pripyat and Chernobyl in Ukraine.

‘These places practically changed my life after I returned home in the sense that I now appreciate much more everything around me,’ he said.

Next year the photographer is hoping to photograph the area around the Fukushima Daiichi nuclear power plant in Japan, which suffered a catastrophic series of meltdowns in 2011. 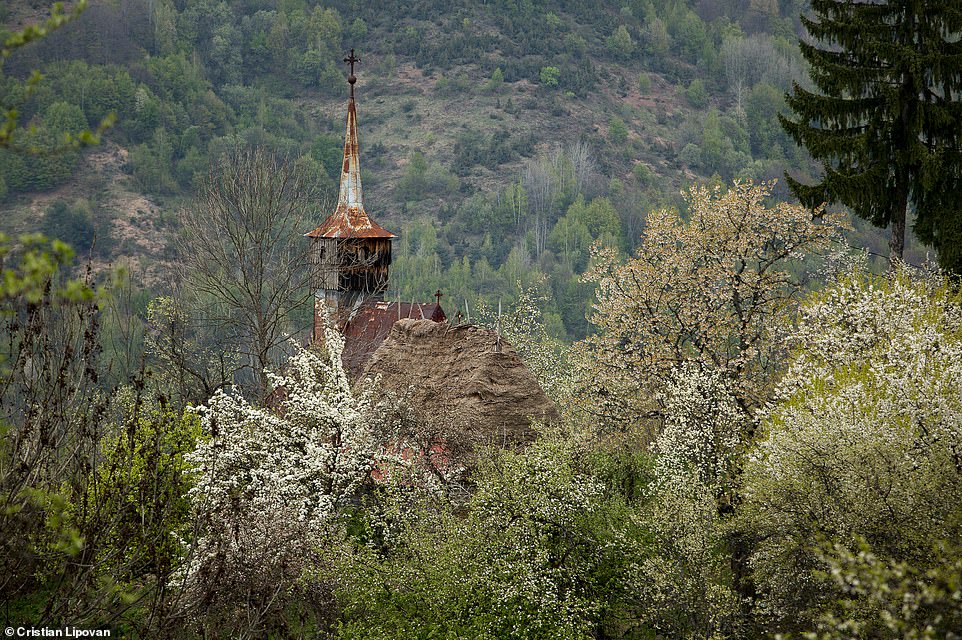 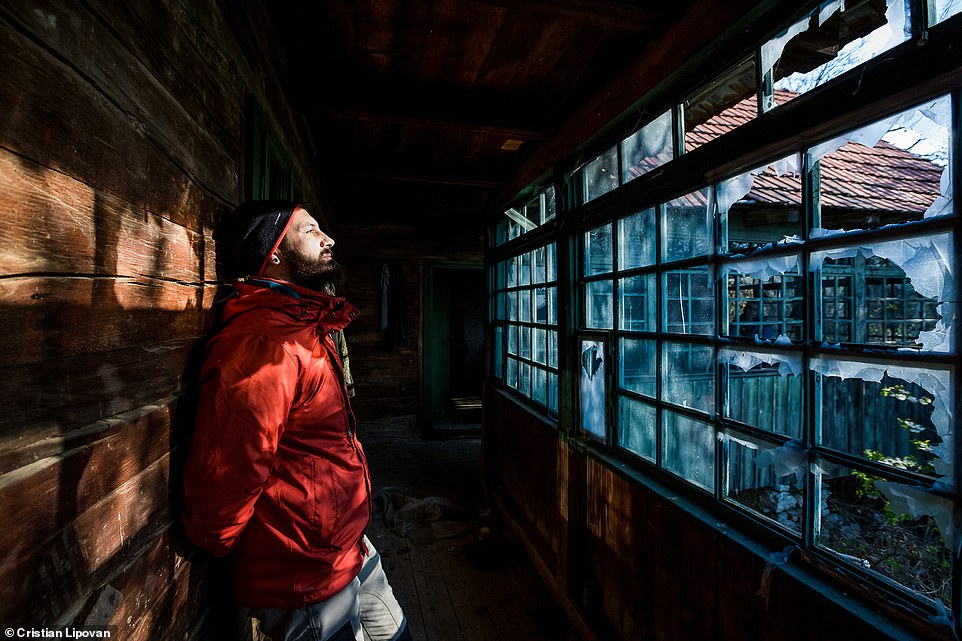