‘We were so anxious walking to the end of the street was a challenge – now we’re full-time travel bloggers!’ The twin sisters who found globetrotting was the therapy they needed

Identical twins who had anxiety so crippling that walking to the end of the street was ‘a challenge’ are now unlikely full-time travel bloggers – with tens of thousands of followers.

Claire and Laura Jopson, 36, from Milton Keynes, Buckinghamshire, had struggled with poor mental health since their schooldays, but discovered that travelling was just the therapy they needed. Along with becoming mothers, it has helped make their world ‘bigger and bigger’.

The pair still get anxious about travelling. They admit being ‘stalked by the thought of panicking in Times Square and ending up on the floor, gripped by delirium’. And they fear having panic attacks on planes, forcing them to divert. But they don’t let these thoughts stop their globetrotting. 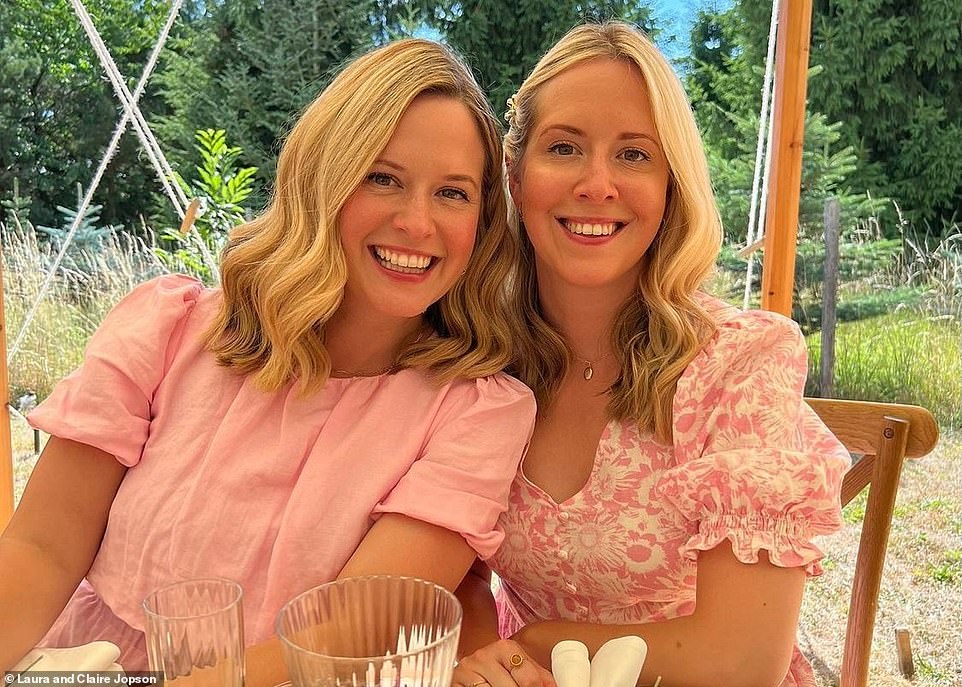 The travel-blogging globetrotters who are afraid of flying: Twin sisters Laura (left) and Claire Jopson 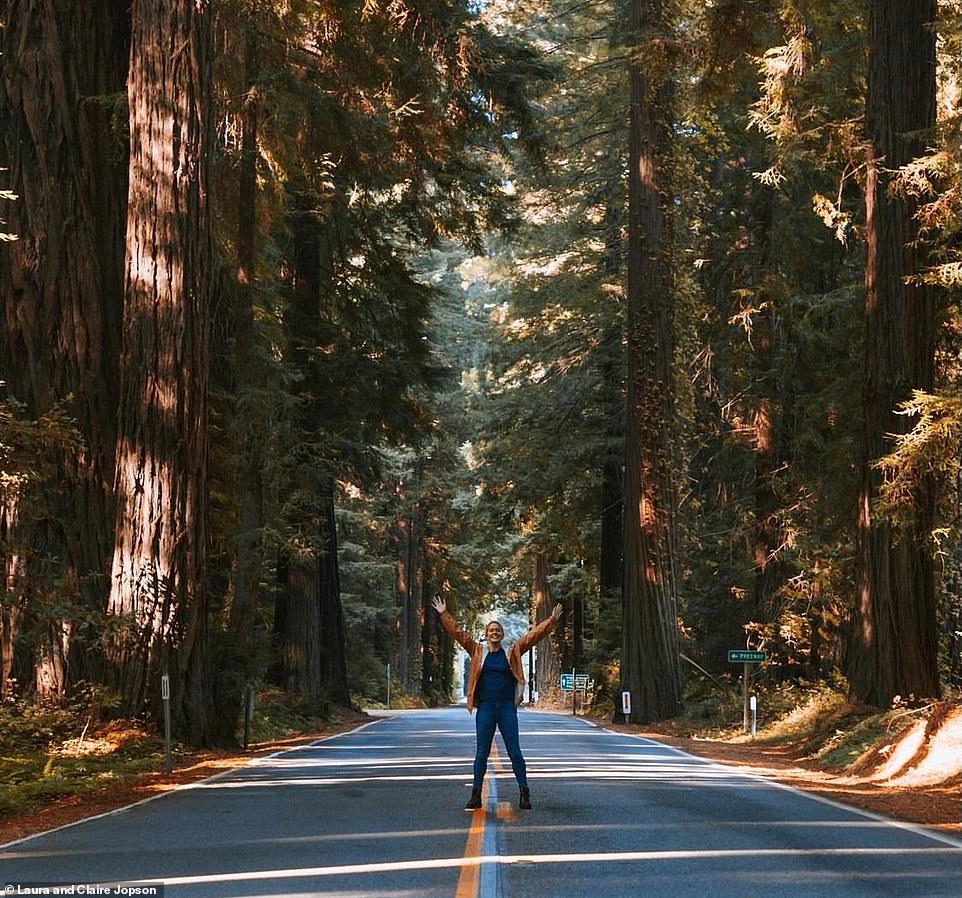 Feeling free: The travel bloggers love the freedom travelling gives them. Above is Claire in the Avenue of the Giants in Portland, America, in 2019

Laura told MailOnline Travel: ‘We both had quite bad anxiety and things like walking around the supermarket were really daunting challenges that we would avoid.

‘I feel like anyone with anxiety will probably understand the feeling of being a bit trapped and imprisoned and it has this way of making your world feel much smaller.

‘Wanting to do something to change that, we started a blog and an Instagram account and posted old photographs of holidays we had been on. We were the kind of people who went away once a year during the summer holidays.

‘I guess it was like “fake it till you make it” and from there people started following us and we began to get a sense of the world and how it can be a friendly place.’ 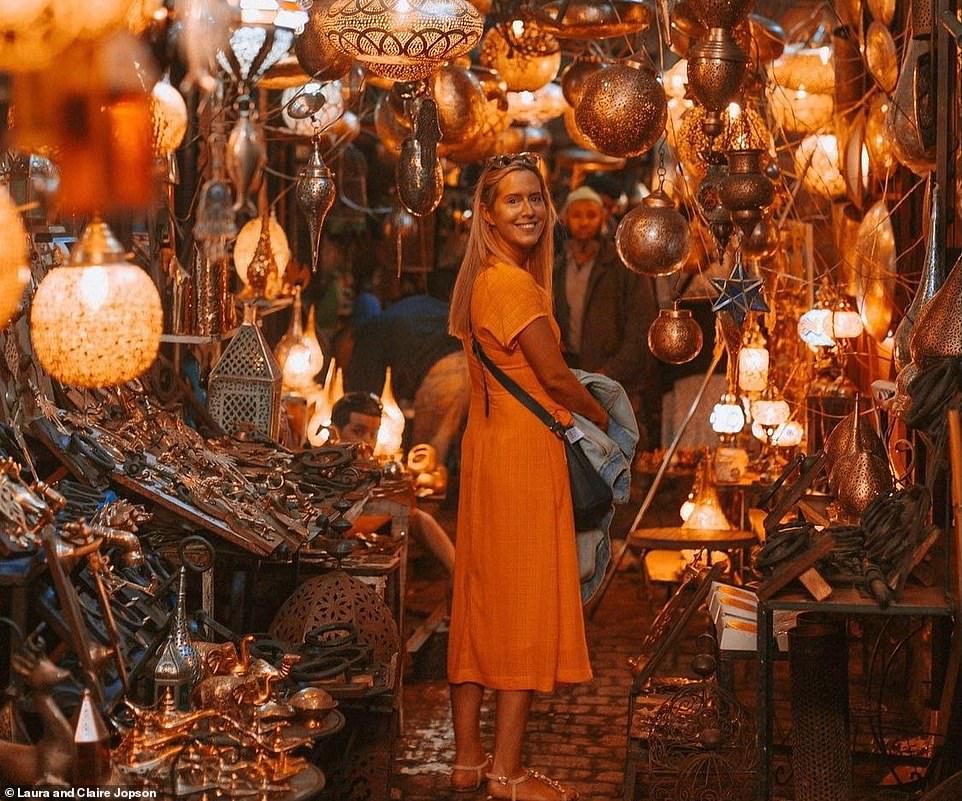 The pair from Milton Keynes used to struggle with the idea of visiting the supermarket – but travelling has helped them live with their anxiety. Laura is pictured here with a big smile as she explores a marketplace in Marrakech, Morocco 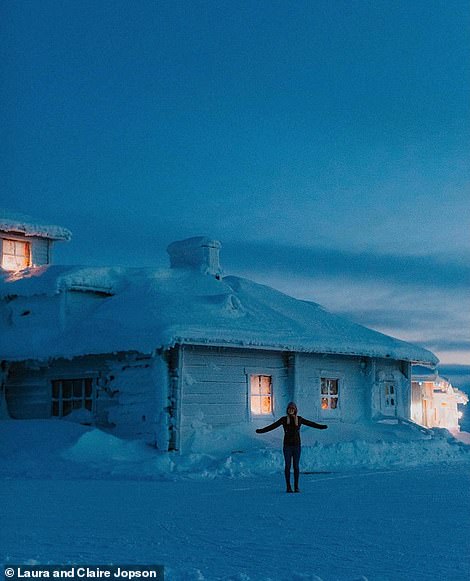 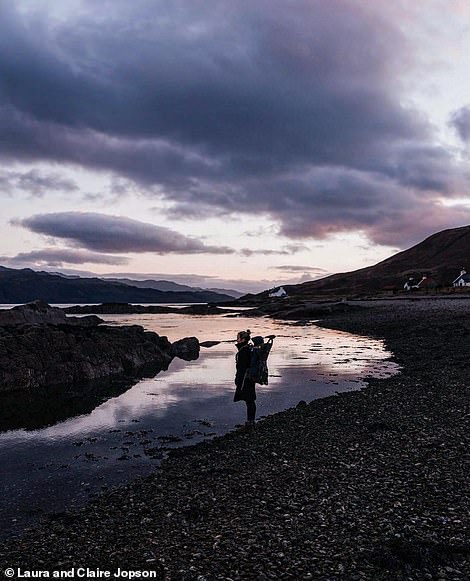 Although travelling has helped improve their mental health, the twins still dislike flying on a plane. Laura pictured in Lapland, Finland (left), and with her son Henry in Scotland (right)

By Christmas, the travel bloggers had around 10,000 followers even though they had yet to travel to new destinations.

To give their followers more content, the twins flew to Washington DC to visit their father.

The pair hadn’t been on a plane for a long time and recalled how the experience was ‘terrifying but amazing’. 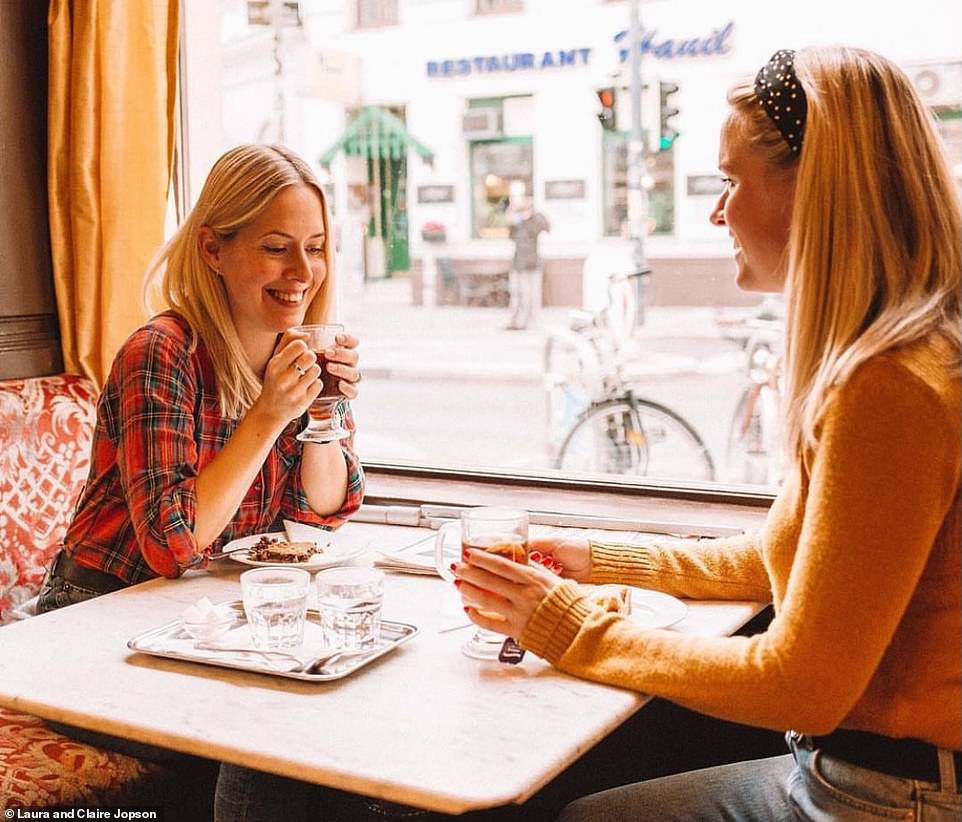 Claire and Laura stopped for a creamy hot chocolate and piece of cake at Café Sperl in Vienna, Austria, as they made plans for the rest of their trip 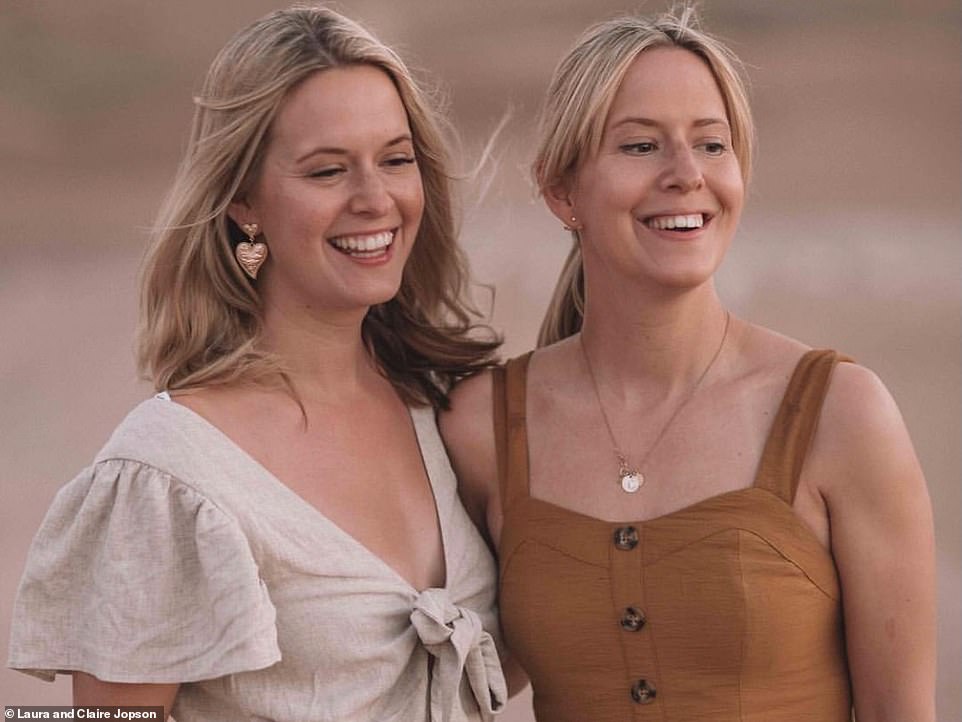 The travelling duo run tours for women who don’t have anyone to travel with or don’t wish to visit a country by themselves. Claire and Laura are pictured here in Agafay, Marrakech, as part of a tour 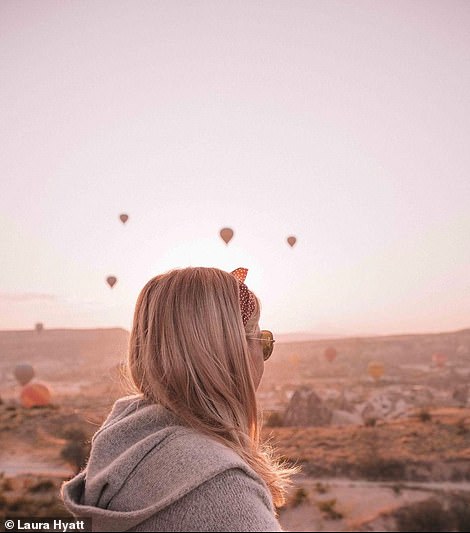 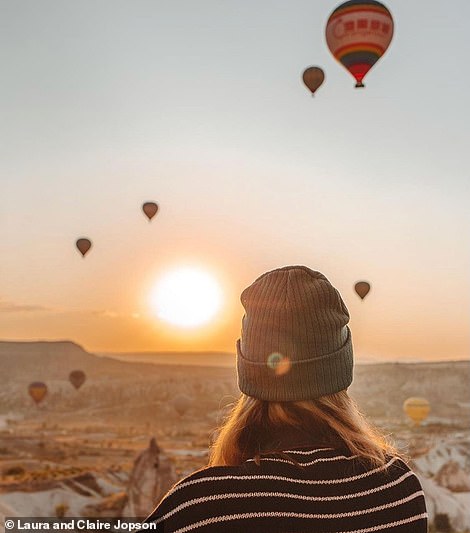 The twin sisters describe themselves as mental health advocates who found therapy in travel. Laura takes in the view in Turkey (left) while Claire is pictured (right) in Cappadocia, Turkey, in 2019 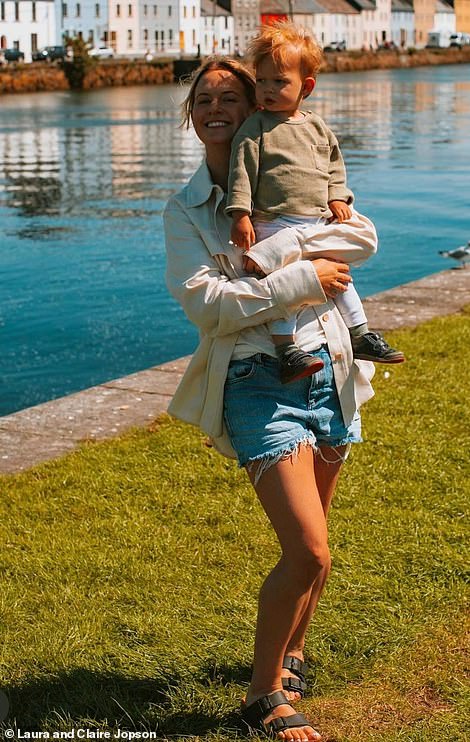 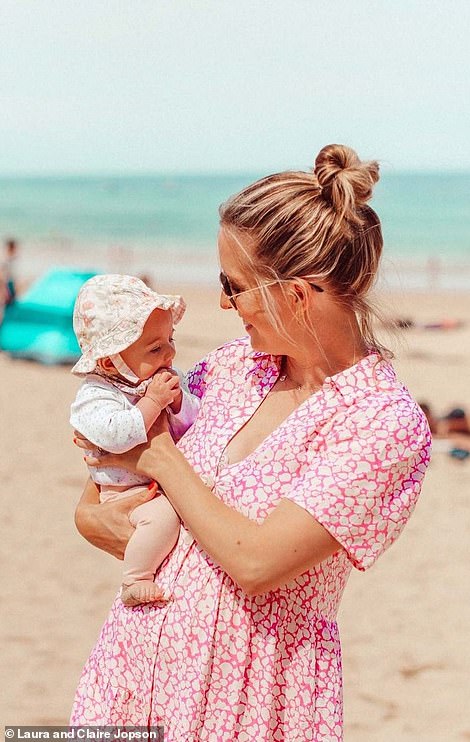 The travel-blogging sisters staycation with their children across the UK regularly. Laura is pictured with Henry in Galway, Ireland, in August (left) and Claire (right) is pictured with her daughter Olive in St Ives, Cornwall, enjoying the British summer

Laura said: ‘When we came back the blog just took off and within a year airlines and hotels were asking us to go away to different destinations. It became a self-fulling prophecy.’

But the mental health advocates, who work for different charities, say it has pushed them out of their comfort zone enough to reap the rewards of what it means to ‘go through anxiety rather than avoid it’.

On travelling around the world, Claire said: ‘It’s almost like therapy and it taught us that actually we are more than capable of doing it. It showed us that we can achieve things and anxiety is just your mind telling you that you can’t do things when actually you can do them.’

Now they organise tours to places including Jordan, Turkey and Morocco for women who may be uncomfortable travelling on their own. 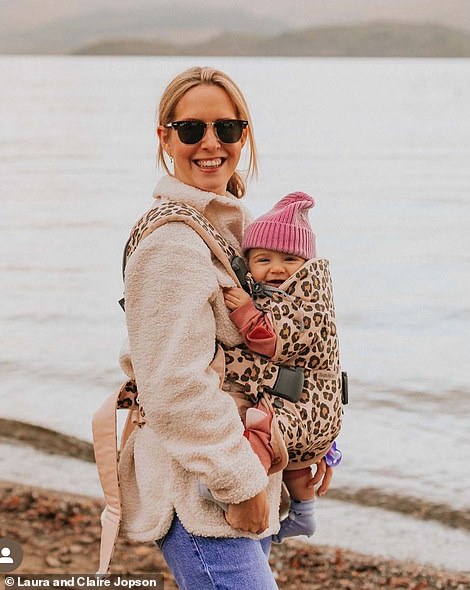 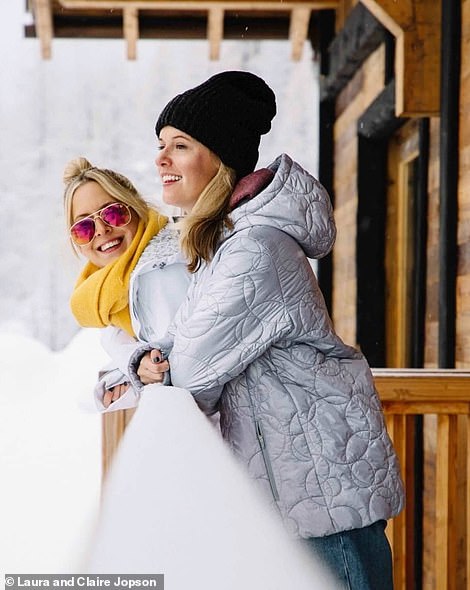 The duo created a travel account on Instagram in 2014 and now have 58.6k followers. Claire is pictured with Olive in Scotland (left) and the sisters are pictured right on a ski trip in Tignes, France, in 2019

The twin sisters admit they are busy tours but said ‘the whole idea is that you don’t have to take lots of annual leave off from work, you can still see lots in a shorter amount of time’.

The travel bloggers said that of the 30 or so countries they have been to, Japan is their favourite destination. Laura said: ‘It was the closest place we got to visiting somewhere that’s almost like going to a different planet. I didn’t think there were many cultural similarities so it felt like an entirely new place, new experiences and customs.

‘That was also scary but exhilarating and just fascinating. I think it’s definitely what ignited our passion to want to travel more and more and to uncover that sense of freedom and the unknown.’

The pair both became mothers within three days of each other in February last year. Neither of them had any idea the other was trying for a baby until they revealed their pregnancies to their parents in 2020.

Both sisters were delighted to go through their pregnancies together and are also happy to experience life as new mums with each other. 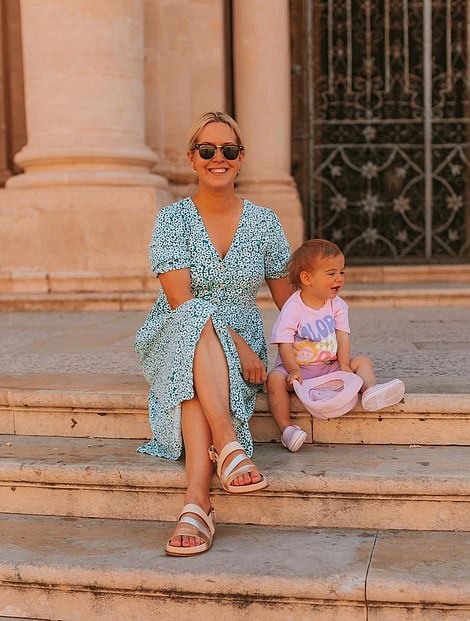 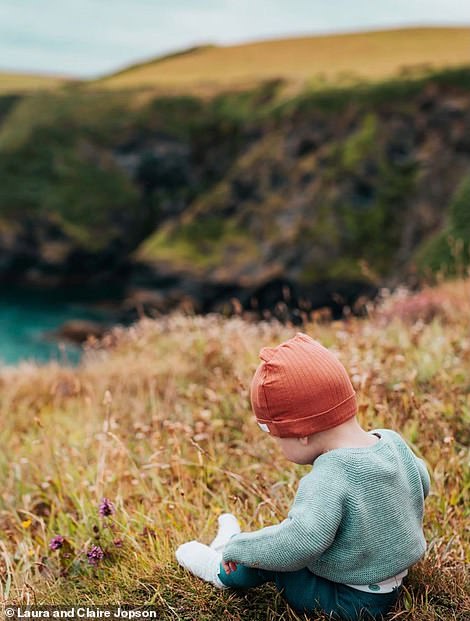 The travel bloggers encourage other parents to take their babies and young children on holiday and highlight how rewarding it is. Claire is pictured on the left with Olive in Sicily, Italy, in June this year and on the right is Henry in Cornwall

Becoming mothers didn’t stop the twin sisters from their travels, but they do acknowledge that travelling with children is a different kind of travel, to which they are still adjusting.

They said: ‘It is very different travelling with children in that it’s a much slower pace of travel but still very rewarding, especially when you see them having a good time in any place.

‘When we’re travelling for the blog, we’re sort of rushing around at 100mph. We’re taking photos, we’re climbing up towers and then we’re doing lots of other things after that.

‘When we first had our kids, Henry and Olive, and you have a newborn your whole world tips upside down and it’s like, “What have I done?” But kids have an amazing way of making the normal seem so fantastic and we both really enjoy travelling with them.’

The twin sisters stress that travel does not have to be exotic and include a long-haul flight – lots of travel they have done with their kids has been in the form of UK staycations.

They said: ‘A weekend away, rather than being in the same house with the same toys and for our own mental health as well, is so refreshing. The babies also benefit from having parents who are really engaged and excited about what they’re seeing.’

CLAIRE AND LAURA’S 10 TIPS FOR TRAVELLING WITH CHILDREN, FROM WHITE NOISE MACHINES TO SELF-STERILISING BOTTLES

1. For your flight, plan five or six small activities and keep cycling through them, especially if, like our children, they are too young to show any interest in screen time.

2. Make sure you pack beach and pool shoes, towelling onesie, waterproof hat, water nappies, cool bag, Izipizi kids’ sunglasses and a wet/dry bag when going to the beach with your children.

3. When travelling with a baby you must remember to take a good travel cot and pram, travel friendly baby bottles, white noise machine, a mini-steriliser and baby bottles. The item we would never travel without? A portable black-out blind.

4. Travel with children doesn’t have to mean far flung exotic holidays or stressful plane journeys. Little people get so much enjoyment from such simple things – and some of our best trips have been those closer to home, including Norfolk and Cornwall. This also reduces stress for everyone as you don’t need to worry about airports, packing limitations or overtired kids – you can just jump in the car and go.

5. White noise is every parent’s best friend. But you can’t lug around a white noise machine with you all the time. Thankfully, the iPhone has an inbuilt white noise function that has saved the day on many of our travels when the babies need a nap on the go.

6. Invest in a great travel stroller – especially one that reclines completely. Naps on the go are a must when you’re travelling with kids, but you want to make sure they are of a good quality – avoiding overtired children and tantrums. We are obsessed with the Ergo Baby Metro travel stroller, as it fully reclines and lets the babies’ have long, comfortable naps whilst exploring new places.

7. Order ahead: rather than worrying about how to get baby food, drinks and formula through airport security, simply order ahead. We regularly place an order via Boots.com and collect it once we are airside – saving us on lots of faff.

8. When travelling with babies, the amount of paraphernalia you have to take with you can be overwhelming. To help cut down on this, we have always used MAM bottles – which self-sterilise in the microwave (their dummies can also be sterilised in it too). Nobody wants to travel with a giant steriliser – and these clever bottles mean that those days are thankfully behind you.

9. If you do need to travel far – by plane – book a night flight. This is by far an easier option for everyone and means you won’t have to entertain a restless baby for too long (if all goes to plan). Again iPhone’s white noise function comes in handy here, alongside packing a blanker or comforter that smells like home.

10. Go to a child-friendly resort – sounds simple, but there are now a huge variety of high-end luxurious resorts, aimed at young children. IKOS resorts are incredible and allow for an early dinner time, alongside the Kinderhotels Europa (we want to take the babies to one of these next year).