Breakfast, they say, is the most important meal of the day, and I’ve been lucky enough to take advantage of them all around the world. I’ve started with congee in Hong Kong and a no-fun egg-white omelette with a decaf soy latte in California.

No matter whether I’ve made a full-bodied assault on a hotel’s buffet or nipped down a side street to find that perfect locals-only cafe, breakfast is always the meal that sets the tone of my trip away.

I’ve learned that Italians do it standing up, the Dutch put chocolate sprinkles on their bread, and the Swedes often offer hangover tablets at the buffet table. 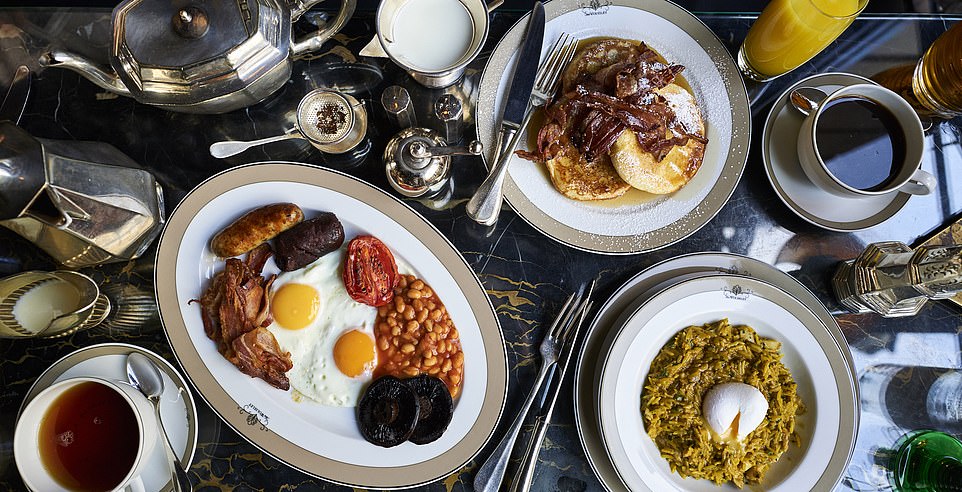 A sense of occasion: The Wolseley, London’s offerings include a fry-up, pancakes and kedgeree, as shown off here, as well as devilled kidneys, bircher muesli and egg-white frittata. It may not be cheap but it’s certainly a treat

I also know that American pancakes can sometimes double as construction bricks but grits – a creamy cornmeal served with bacon and cheese – is more delicious than it sounds.

Above all, enjoying breakfast on holiday is the chance to try something you’d never normally eat, even if you do discover that congee is a close cousin of porridge.

There’s a sense of occasion and a touch of theatre here; silver domes are lifted to reveal everything from devilled kidneys to kedgeree. In the heart of Piccadilly, there’s a global-minded menu including bircher muesli and egg-white frittata. Not cheap but very inviting.

Bethnal Green has become very hip, but one thing has stayed the same. First opened in 1900 and still with its pale yellow Art Deco signs, the family-run E. Pellicci continues to produce delicious fry-ups to locals, soap stars and globe-trotting breakfast pilgrims. 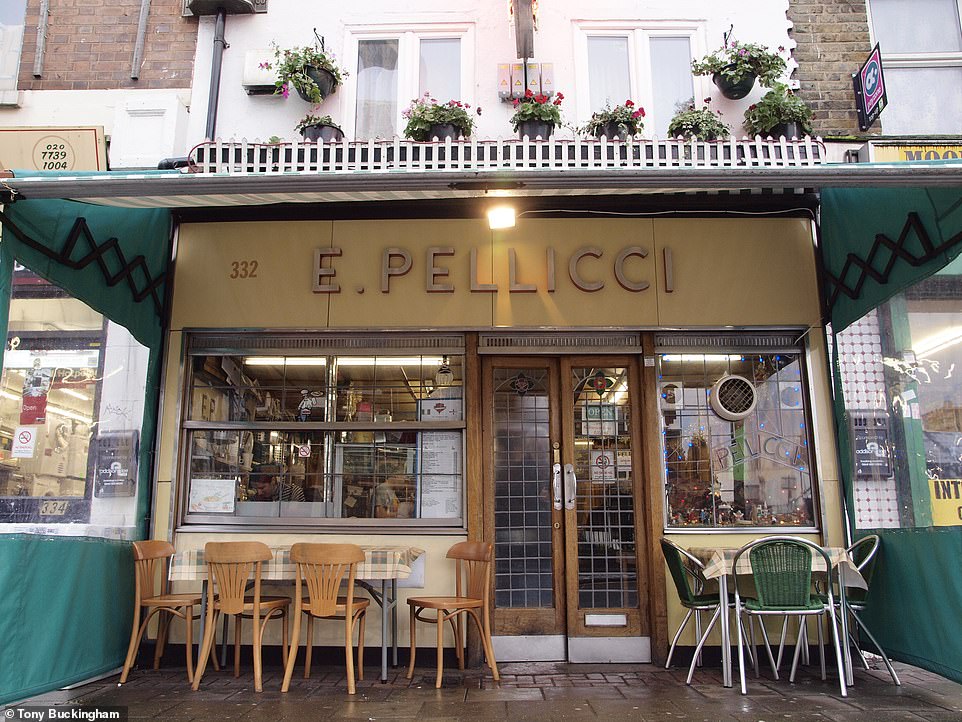 You’ll find mismatched crockery, vats of local yogurt, impeccably meaty sausages and fat slices of bacon at this Elizabethan country house near Honiton. Staff try to source everything from within a 25-mile radius and most of the vegetables come from the hotel’s own garden.

The classic: Smoked kippers, herb butter and tomatoes as part of the buffet breakfast (£16). thepighotel.com/at-combe

SCOTLAND: SHIP ON THE SHORE, EDINBURGH

Overlooking the former Royal Yacht Britannia on the Leith waterfront, a truly regal breakfast awaits at Ship On The Shore. Options include smoked salmon, Arbroath smokies and Stornoway black pudding, and can be partnered with oysters and champagne.

A Yorkshire institution that celebrates its centenary this year. The Swiss heritage of Bettys means that there’s Gruyere cheese and muesli on offer, but also solidly local pikelets, muffins and Yorkshire-produced sausages. There are six branches but Harrogate feels like the mother ship – a light and airy Victorian building overlooking sedate Montpellier.

Playing to geographical strengths, the morning offering at the 13-room Harbourmaster, one of Wales’s first boutique hotels, comes with seaweed-enriched laverbread and Penian bacon. But it also has room for modern favourites such as avocado toast, all served quayside in the pretty coastal town.

This hotel has provided farm-to-fork eating since 1964. The Allen family keep the farmhouse ethos, and breakfast tables groan with dishes including porridge made from local Macroom oatmeal, butter and cream from the hotel’s farm and even coffee from its own roastery.

The city’s trendiest cafe is a benchmark for rising breakfast trends, serving everything from smashed avocado to beetroot latte, although there are updates of British breakfast classics, including fry-ups. 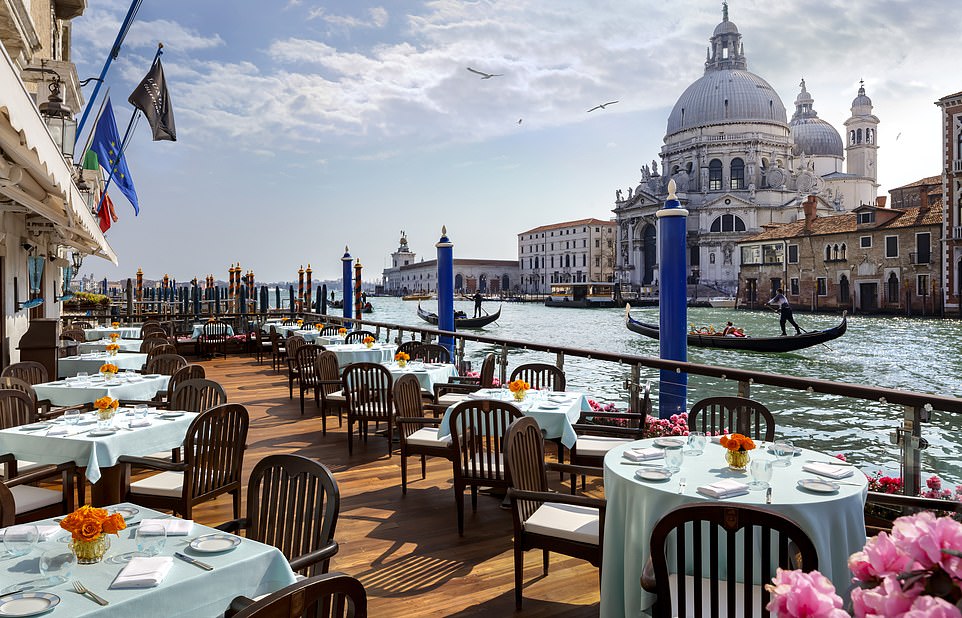 At the point where the Grand Canal curves out towards the Adriatic, you can enjoy breakfast while taking in one of Europe’s most perfect views. Although the food is expensive, it is everything you’d hope for from a five-star hotel. Ask for a terrace table and admire the Santa Maria della Salute opposite.

The classic: Eggs benedict as part of a £45 buffet. marriott.com/hotels/travel/ vcegl-the-gritti-palace

France isn’t really a country that believes in the blow-out breakfast. In the food-obsessed Les Halles area, one of the city’s best bakeries has a small cafe attached. The croissants and baguettes straight from the oven are the best you’ll ever taste. And the bakery has charm in spades.

The veranda of this boutique hotel on Ocean Drive provides the best people-watching opportunity in South Beach. Coffee comes from the local Panther roasting plant and the menu takes in all-American waffles and inspiration from Cuba. Unlimited mimosas come in at £19, adding a very Florida sense of indulgence.

A menu that reflects the city’s diversity and love of carb-laden breakfasts with bagels and lox, knishes and challah bread. This cafe only opened in 2014 but with its dapper white-jacketed waiters, it brings a century of Lower East Side culinary history from the veteran, family-owned deli attached.

Breakfast with a full complement of celebrities on the side, this hotel is where people come to see, be seen and eat lots of protein, plus sip cold-pressed juices served inside this Victorian mansion and on the terrace. Just don’t try to take any photographs: cameras are banned. 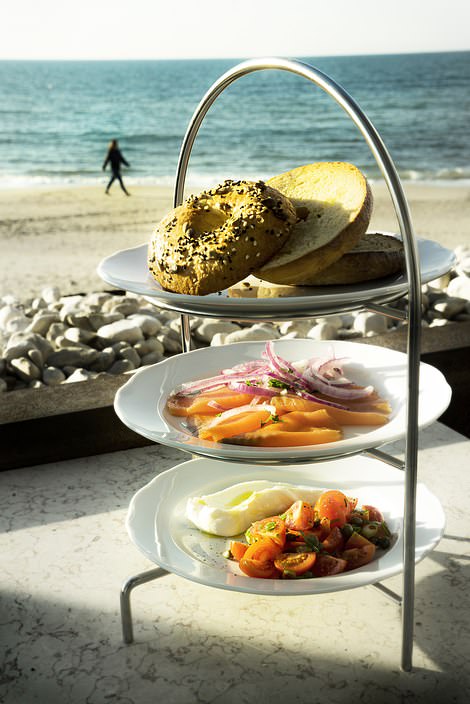 In the heart of the Capeland winelands, this serene gabled farmhouse, surrounded by an estate, is perhaps South Africa’s best-known foodie hotel. At breakfast, the light-filled Babel restaurant offers impeccable ingredients, including estate-made olive oil and micro herbs picked minutes before they appear on the plate.

The classic: Home-cured boerewors sausages as part of the buffet breakfast (£50). babylonstoren.com/

Middle Eastern breakfasts are having a moment, with houmous, shakshuka ‘shaken eggs’ and salads popping up across the globe. Manta Ray has a beachfront setting and crowds lap up the Mediterranean climate by heading out to the terrace to enjoy one of the city’s finest breakfasts.

Overlooking the famous crescent bay, anyone can turn up to this clubhouse belonging to the Iceberg’s swimming club. One floor below, a posh restaurant, the Icebergs, only does breakfast at weekends. It’s insanely popular, but one to savour, especially after a bracing dip in the saltwater pool.

The classic: Sweetcorn fritters with bacon and guacamole (£10).icebergs.com.au 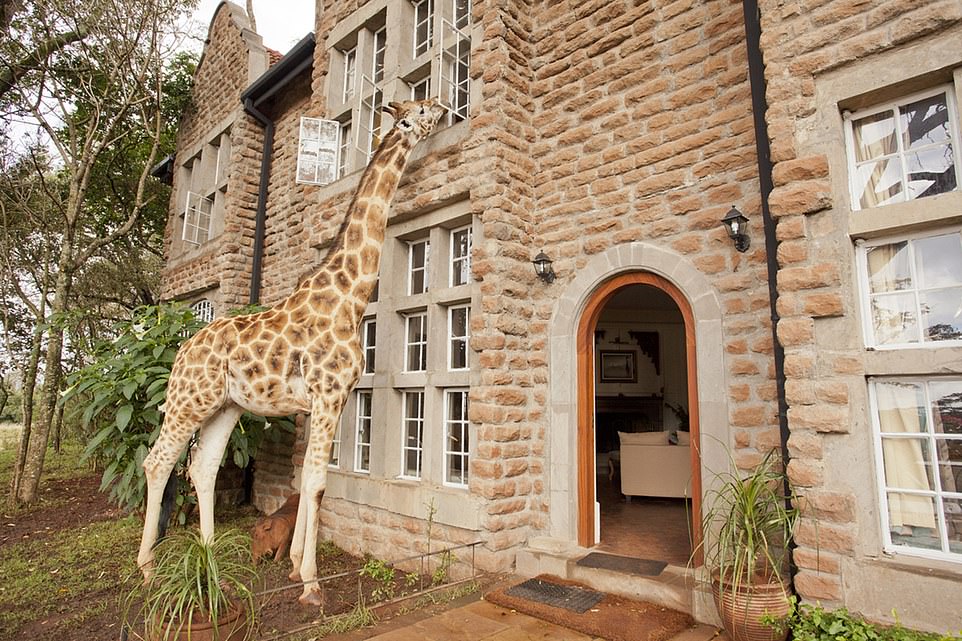 Some neck: Feeding time at Giraffe Manor outside Nairobi, Kenya 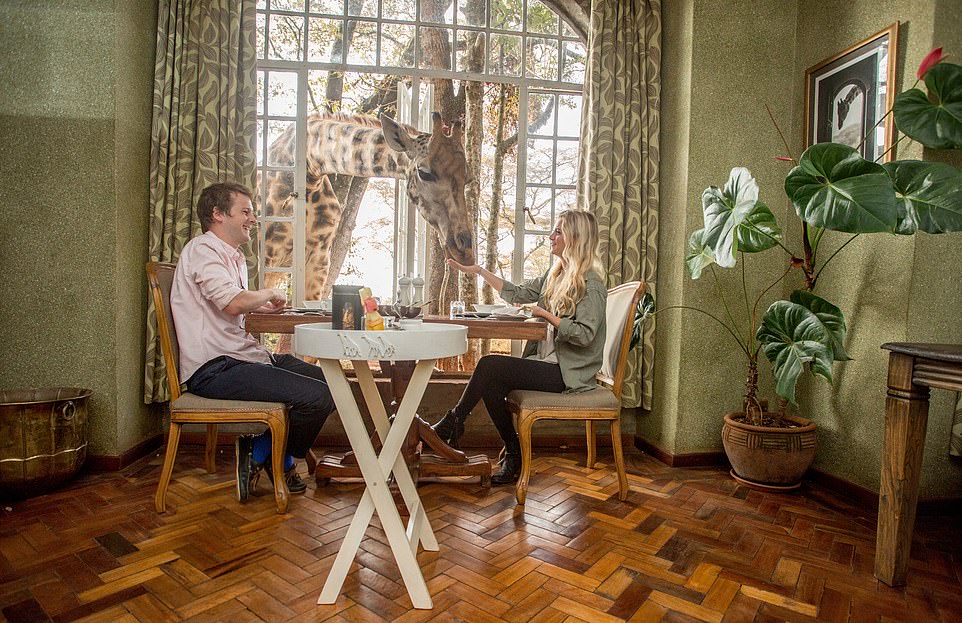 Visitors to the Giraffe Manor, near Nairobi, Kenya have a bite to eat with the other residents who eat specially prepared pellets

The ultimate safari photo-bombing opportunity. This hotel – built in the 1930s – sees Rothschild’s giraffes poking their heads through the dining room windows each morning. They’re in search of nutritionally balanced pellets made from grasses, hay, wheat and molasses, which guests can feed them while tucking into their own breakfast.

The classic: Passionfruit pancakes with mascarpone. Breakfast is included in the full-board price. thesafaricollection.com

You might expect a hotel on a cocoa plantation to deliver breakfast with a high sugar content, but the menu at Boucan, owned by the Hotel Chocolat group, is more sustaining than that. It prefers to concentrate on local fruit, porridge and eggs and bacon, plus cocoa tea, a traditional, quite bitter drink that Samuel Pepys drank in the 17th Century.

The classic: Granola with dark chocolate plus full breakfast (£17). hotelchocolat.com/uk/boucan.html 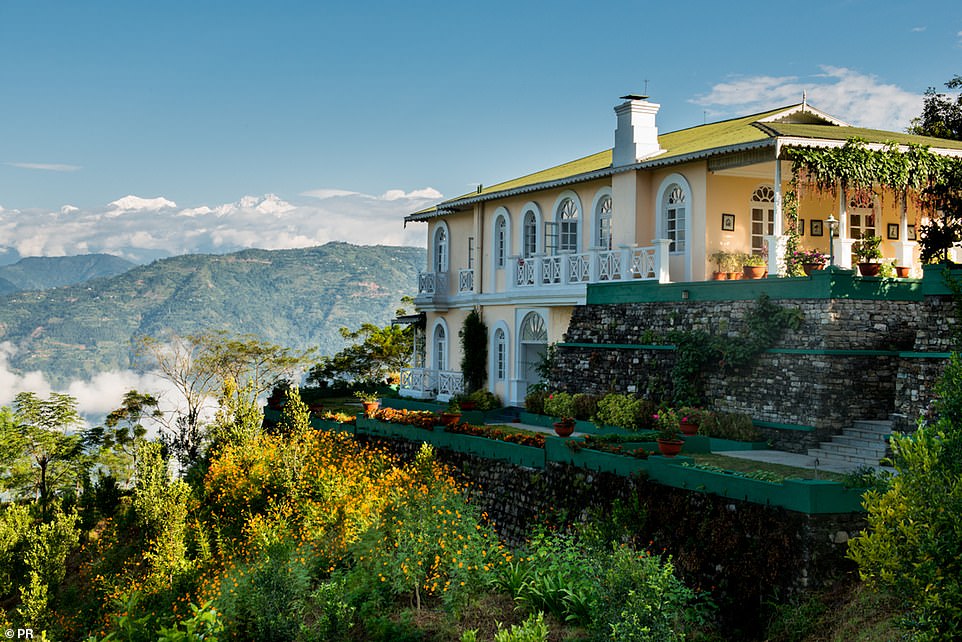 A hotel with a nuanced touch of the Raj. Above the River Rungeet, the vista is rows of tea bushes. With eight rooms in old plantation buildings, mornings see everything from British-style fry-ups to paratha (an egg cooked into unleavened bread) on the menu, plus tea that has been grown just yards away.

The classic: Masala scrambled eggs with coriander. Breakfast is included in the full-board price. glenburnteaestate.com

A 14-room hotel on a coffee plantation has produced a blend of taste and sustainability. You’ll be able to have your morning coffee from beans picked, roasted and ground from the surrounding estate and go hiking in the nearby countryside. The menu is firmly South American.