Tourists gasp for breath as they climb for two hours to a peak in the Peruvian Andes that stands 16,404 feet (5,000 meters) above sea level. They’re dead tired, but stunned by the magical beauty unfurled before them.

Stripes of turquoise, lavender and gold blanket what has become known as ‘Rainbow Mountain,’ a ridge of multicolored sediments laid down millions of years ago and pushed up as tectonic plates clashed. It’s only within the past five years that the natural wonder has been discovered by the outside world, earning it must-see status on Peru’s burgeoning backpacker tourist circuit.

‘You see it in the pictures and you think it’s Photoshopped – but it’s real,’ said Lukas Lynen, an 18-year-old tourist from Mexico. 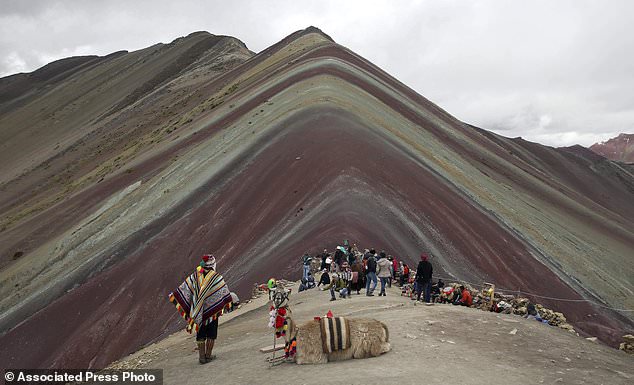 An Andean man rests with his llama on Rainbow Mountain in Pitumarca, Peru 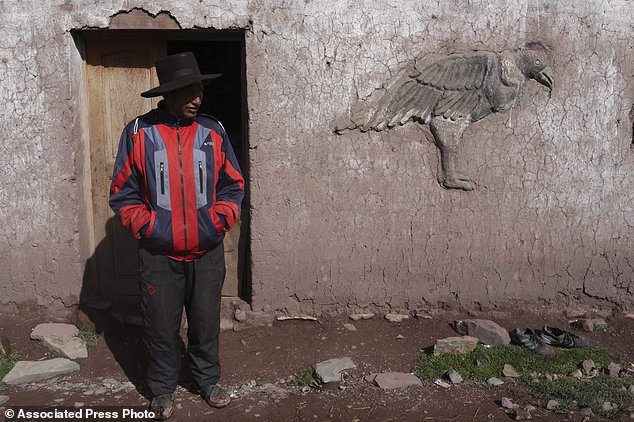 Miguel Rocco stands in front of his home in Pitumarca. The local indigenous community has struggled with high rates of alcoholism, malnutrition and falling prices of wool from their prized alpaca 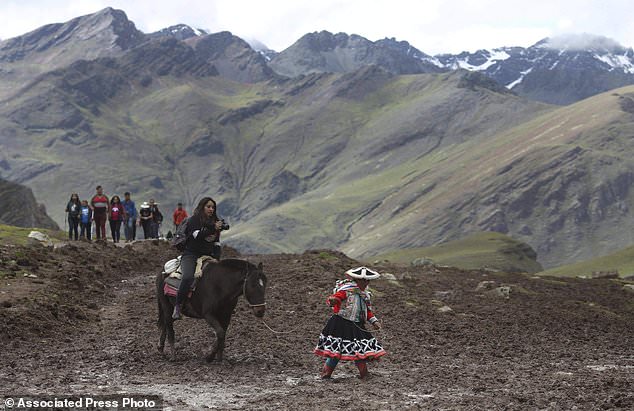 The popularity of Rainbow Mountain, which attracts up to 1,000 tourists each day, has provided a much-needed economic jolt to this remote region populated by struggling alpaca herders. Environmentalists, however, fear the tourists could destroy the treasured landscape, which is already coveted by international mining companies.

‘From the ecological point of view they are killing the goose that lays the golden eggs,’ said Dina Farfan, a Peruvian biologist who has studied threatened wildlife in the area just a few hours from the Incan ruins of Machu Picchu.

As proof, he points to a 2.5-mile (4-kilometer) dirt trail climbed by tourists to reach Rainbow Mountain that has been badly eroded in the last 18 months, scarring the otherwise pristine landscape. A wetland once popular with migrating ducks has also been turned into a parking lot the size of five soccer fields that fills each morning with vans of mostly European and American visitors.

There are more serious threats, too.

Camino Minerals Corp., a Canadian-based mining company, has applied for mining rights in the mineral-rich area that includes the mountain. The company did not respond to a request by The Associated Press for comment on its plans. 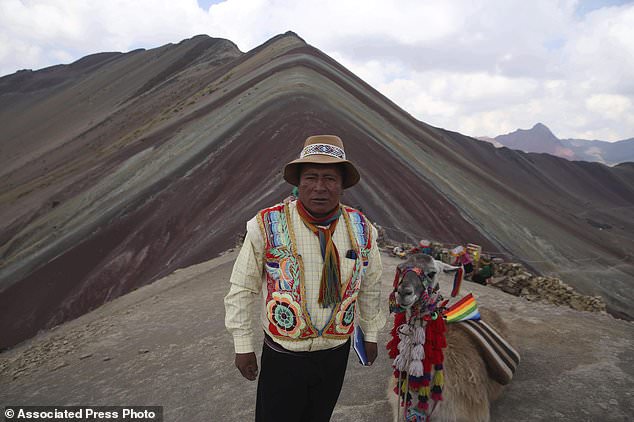 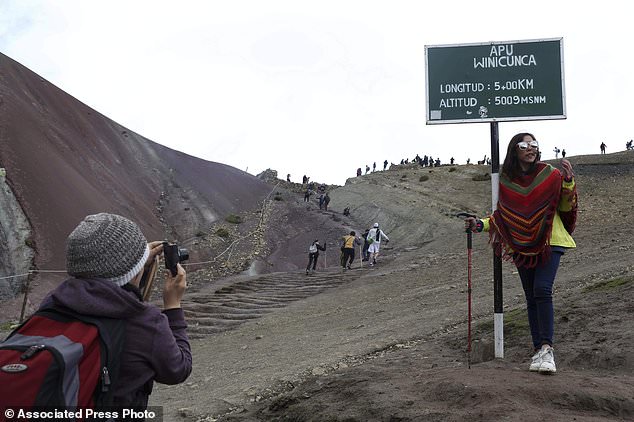 A tourist poses for a photo at the entrance that leads to Rainbow Mountain. Backpackers are flocking to the dazzling rainbow-colored mountain in the Peruvian Andes, transforming a forgotten village of impoverished alpaca herders into a tourist mecca

Yet the flood of tourists has meant jobs and hard cash for the local Pampachiri indigenous community, which has struggled with high rates of alcoholism, malnutrition and falling prices of wool for their prized alpaca. Many have abandoned nomadic life for dangerous gold mining jobs in the Amazon.

Now, they charge tourists $3 each to enter their ancestral land, netting the community roughly $400,000 a year – a small fortune that has triggered a tax battle with an impoverished, nearby municipality, which has seen no part of the windfall.

The surge in tourists also comes with a responsibility to be good stewards of the environment and their new guests, and Pampachiri community leader Gabino Huaman admits he is not sure they are ready to fully handle it.

Despite the challenges, roughly 500 villagers have returned in the last couple of years to take up their ancestral trade of transporting goods across the Andes. The difference is that now they are hauling tourists on horseback. 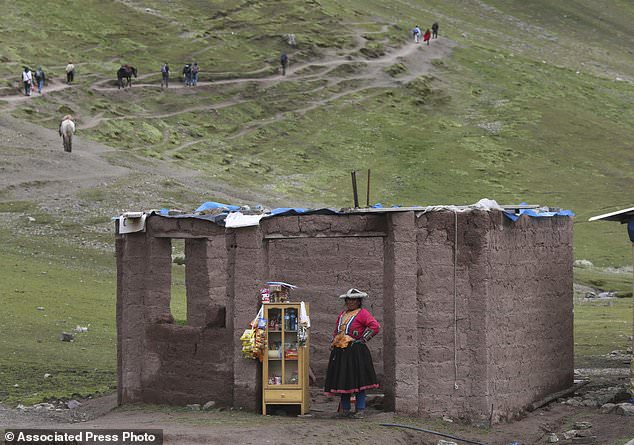 An Andean woman sell candies, water and chips, on the route to Rainbow Mountain 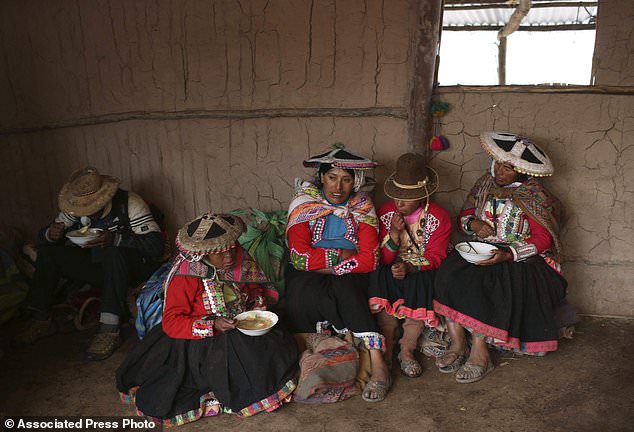 A group of Andean muleteers break for lunch during a tour guide to Rainbow Mountain. Roughly 500 villagers have returned in the last couple of years to take up their ancestral trade of transporting goods across the Andes. The difference is that now they are hauling tourists on horseback 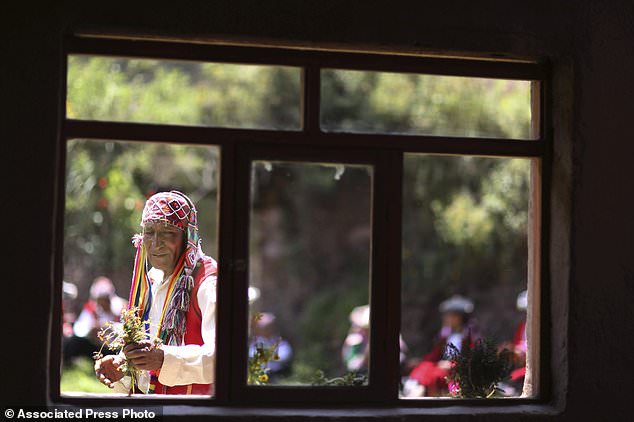 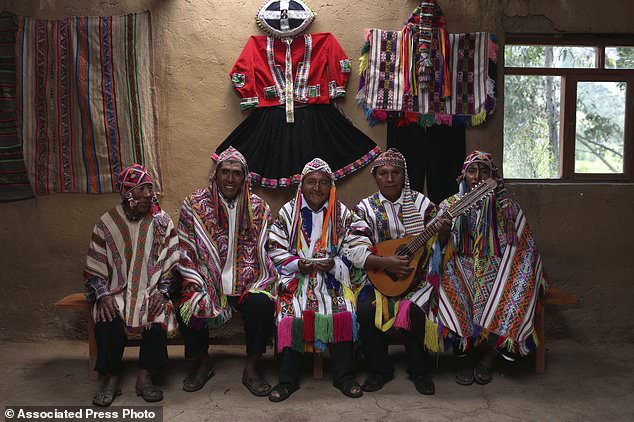 A group of musicians pose for a portrait in Pitumarca, where tourists are stunned by the magical beauty of the stripes of turquoise, lavender and gold that blanket the mountain

‘It’s a blessing,’ said Isaac Quispe, 25, who quit his job as a gold miner after six of his camp mates were murdered. He returned home and bought a horse that last year earned him $5,200 hauling tourists uphill.

The guides dress in colorful woolen clothes and wide-brimmed, traditional hats to lead the horses.

Farfan, the biologist, said he hopes the Pampachiri can learn from other sustainable tourism endeavors in Peru.

It was the success of one such project, in the nearby town of Chillca, that first put Rainbow Mountain on the map.

For much of the past decade, a group of shepherds had been quietly taking small groups of tourists to the mountain as part of a five-day hike around the fast-melting Ausangate glacier. Over time, and thanks to the stunning photographs posted on the internet, the secret got out. 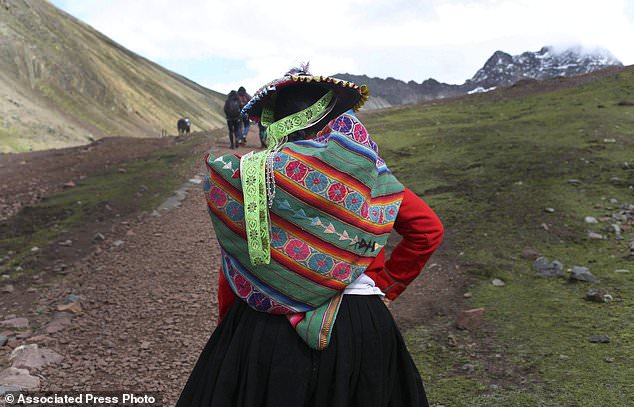 An Andean woman walks to Rainbow Mountain in Pitumarca. The 16,404-foot (5,000-meter) peak of multicolored sediments was laid down millions of years ago, then pushed up clashing tectonic plates, but it’s only within the last five years that the wonder has been discovered by outsiders 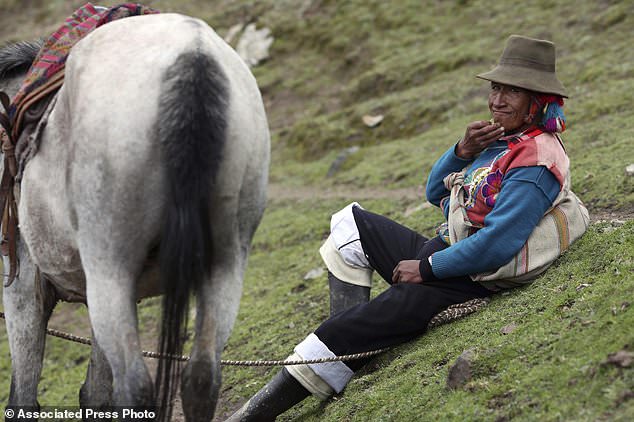 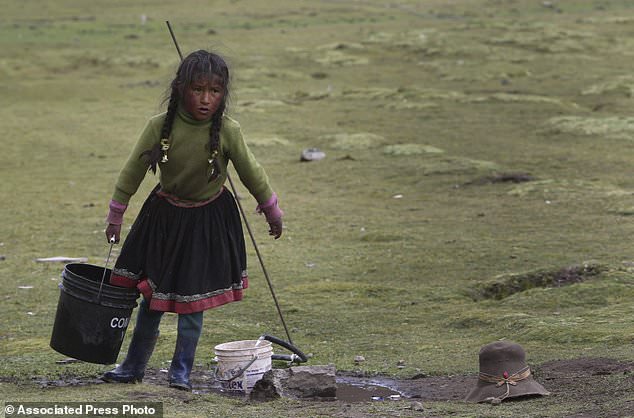 The popularity of Rainbow Mountain, which attracts up to 1,000 tourists each day, has provided a much-needed economic jolt to this remote region 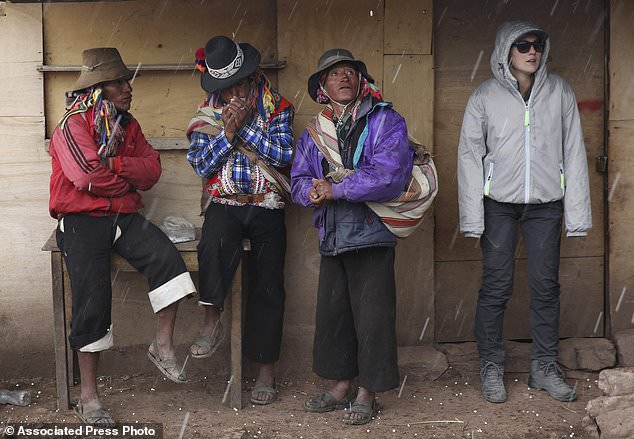 Today the shepherds of Chillca manage four lodges made of eucalyptus wood with a capacity for 16 tourists each. They are lighted only by candle, but have hot water.

Arriving guests are given shoes made of alpaca leather and wool. At dawn, lodge-keeper Orlando Garcia gently awakens his guests with a love song performed in the Quechua language.

‘You always have to be guessing what the client wants, and take care of it so you don’t lose their smile,’ Garcia says. ‘We want them to feel the greatest comfort at almost 16,404 feet.’ 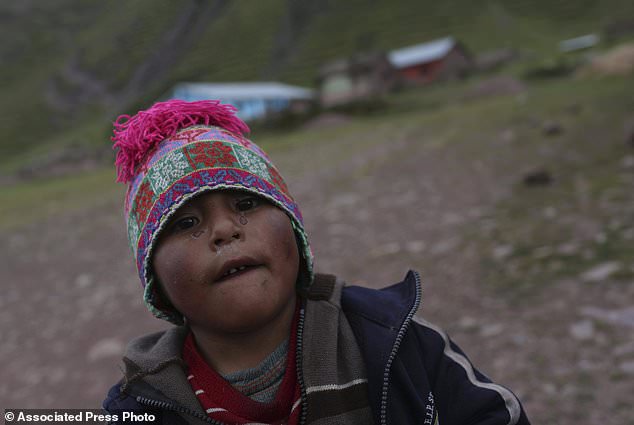 Henry, who’s five years old, eyes the camera outside his school in Pitumarca 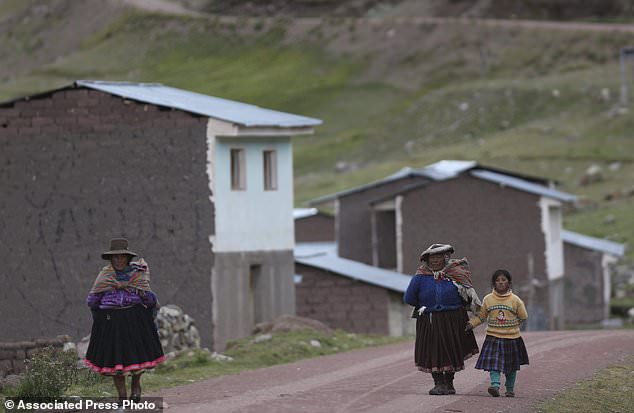 Women walk near to the route to the recently-discovered mountain 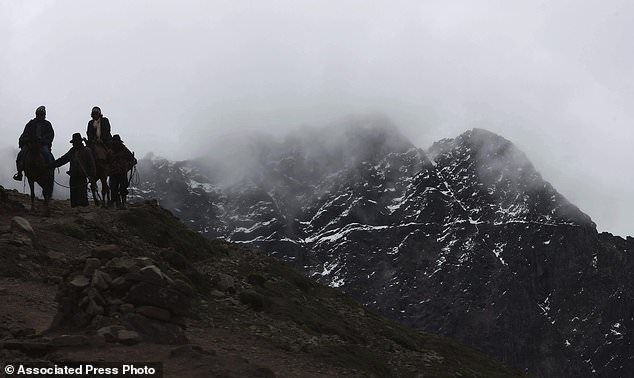 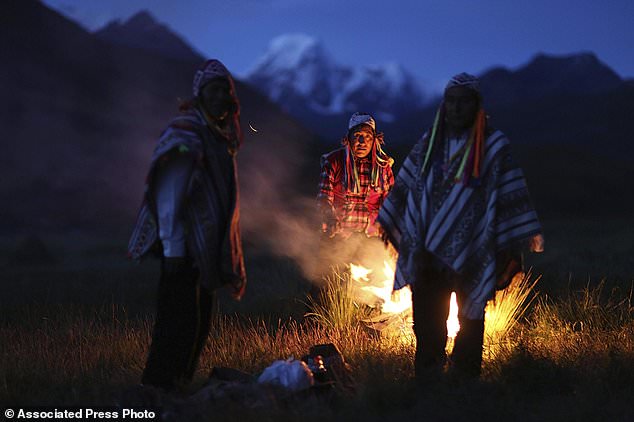