This undated photo made available Thursday Jan. 17, 2019, shows the so called ‘delay scarf’ which a Munich commuter has knitted with each colour reflecting the amount of time her journey with Deutsche Bahn train service had been delayed. The hand-made scarf sold in an online auction for 7,550 euros (dollars 8,600) to the German Railway Deutsche Bahn. The money is being donated to a charity for the homeless. (Sara Weber via AP)

Germany’s biggest rail company, under fire for its unpunctual service, is trying to mollify one disgruntled commuter by buying her “delay scarf.”

Deutsche Bahn, which on Thursday announced plans to hire 22,000 more staff, bought the hand-made scarf in an online auction for $8,600 (7,550 euros.) The money is being donated to a charity for the homeless.

According to her daughter, journalist Sara Weber, the Munich commuter had knitted the grey, pink and red scarf last year, with each color reflecting the amount of time her journey had been delayed.

Weber’s social media post about the scarf drew widespread attention this month after she post about it on Twitter, reflecting Deutsche Bahn customers’ frustration at the company’s persistent delays. 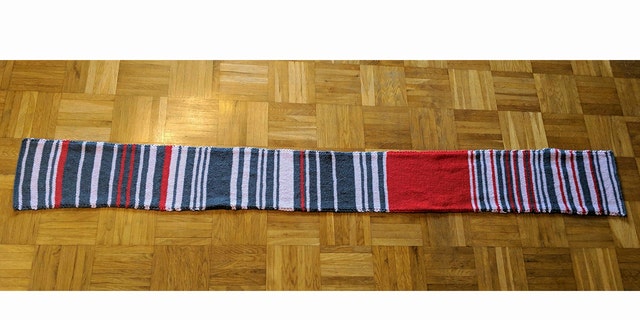 Speaking about the reaction to her post, Weber told the New York Times that “it blew my mind."

“It has become somewhat of an urban myth that Germans are always on time and trains in Germany run on time, but it’s not always true,” she said.

Her mother, Claudia Weber, 55, told the publication: “It’s not a statistic; it’s one year and how I felt about it. I understand the problems they’re having. There’s more and more commuters every year, but on the other hand I spend a lot of time waiting.”

This story was originally published by the Associated Press.