A TRAVEL blogger has been slammed for posting a 'disrespectful' photo of a rubber duck on the tracks outside Auschwitz in Poland. 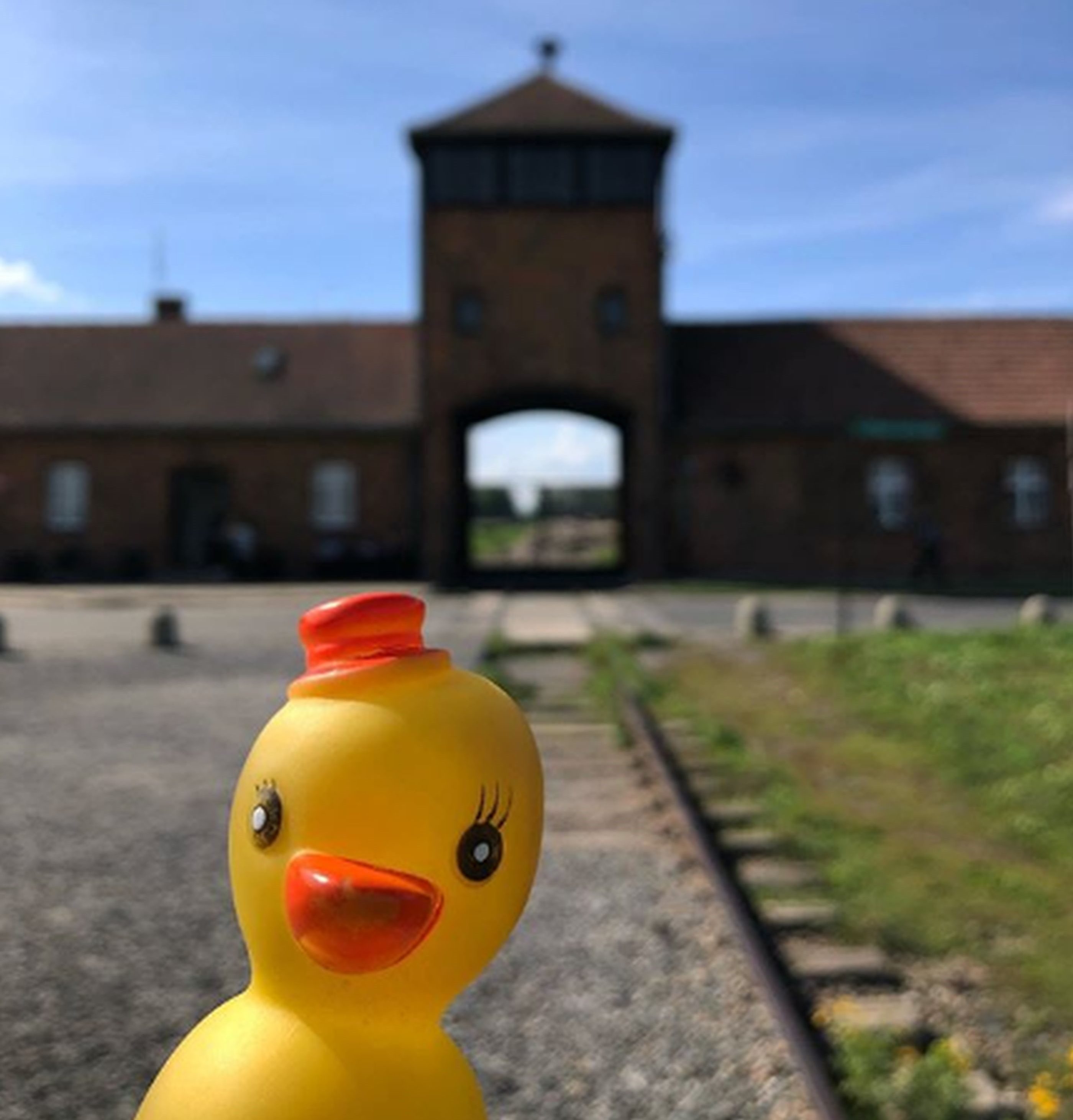 The image was posted by Spanish-language account, named @Atuk.apil.

The picture was of a smiling rubber duck outside the concentration camp.

It is just one of the pictures of the duck posted at landmarks around the world such as Buckingham Palace and Mount Vesuvius.

Next to the smiling toy, the account wrote: "It was the largest extermination centre in the history of Nazism, where it is estimated that about 1,300,000 people were sent, of which 1,100,000 died, the vast majority of them Jewish.

"Auschwitz II (Birkenau), extermination camp, where most of the more than one million victims of the camp died. In this section were women. 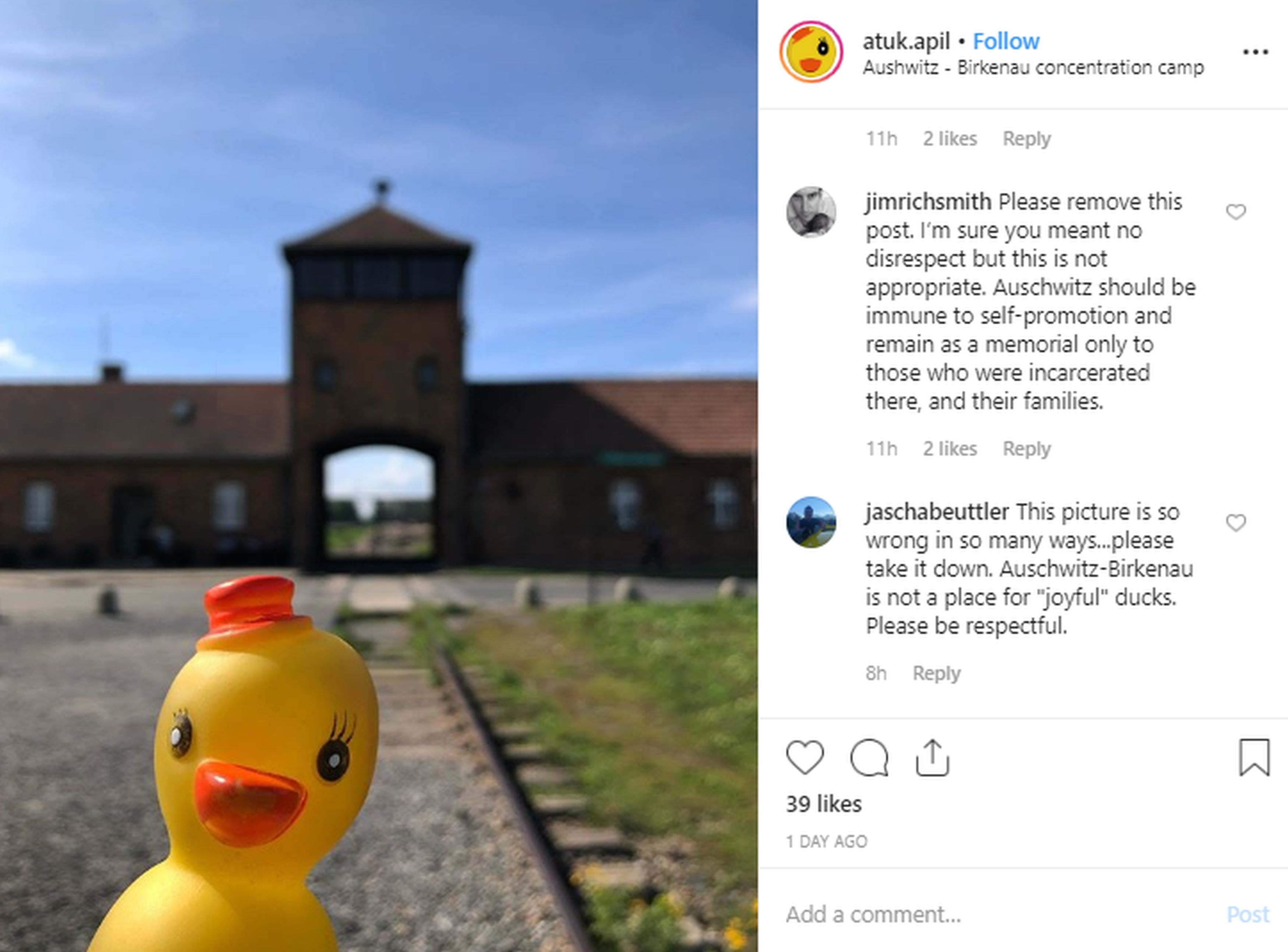 "Trains full of people arrived daily and were immediately separated between'fit and unfit'. The fit had a life expectancy of months, while the unfit were sent directly to the gas chambers."

The account, which has over 1,000 followers, was met with a barrage of abuse from angered social media users after it was shared by seemingly upset Auschwitz memorial staff.

It was swiftly denounced as 'distasteful' and 'shameful' – prompting the Instagrammer to swiftly delete the post.

In their post, museum staff wrote: 'What if someone who travels with a rubber duck and uses it as an artistic Instagram convention arrives at Auschwitz Museum?

'Is the rubber duck in front of the Gate of Death disrespectful? Or is it a side effect of the visual world we should accept/ignore?'

Horrified Twitter users blasted the individual behind the photo, branding them 'extremely disrespectful' and 'callous'. 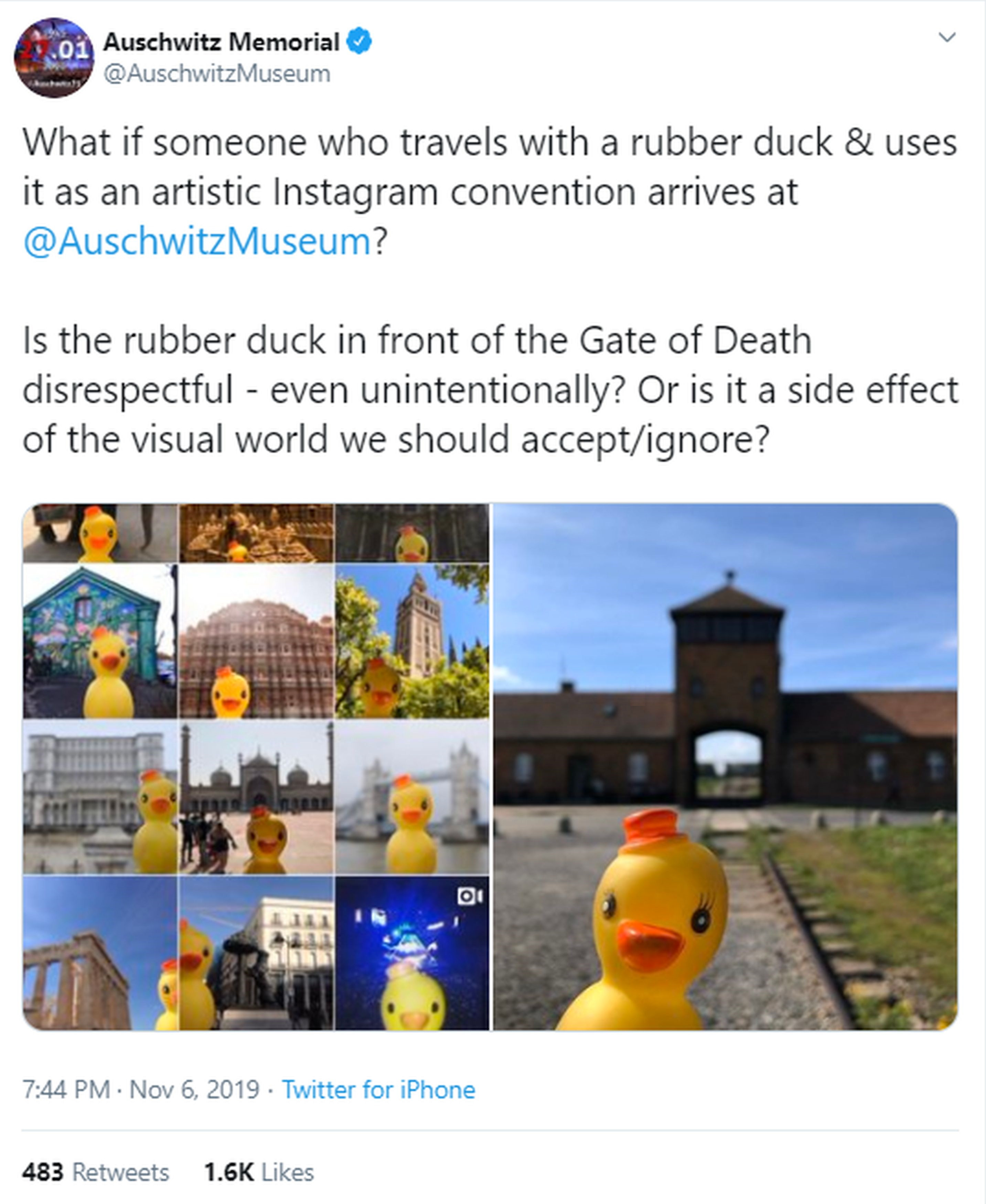 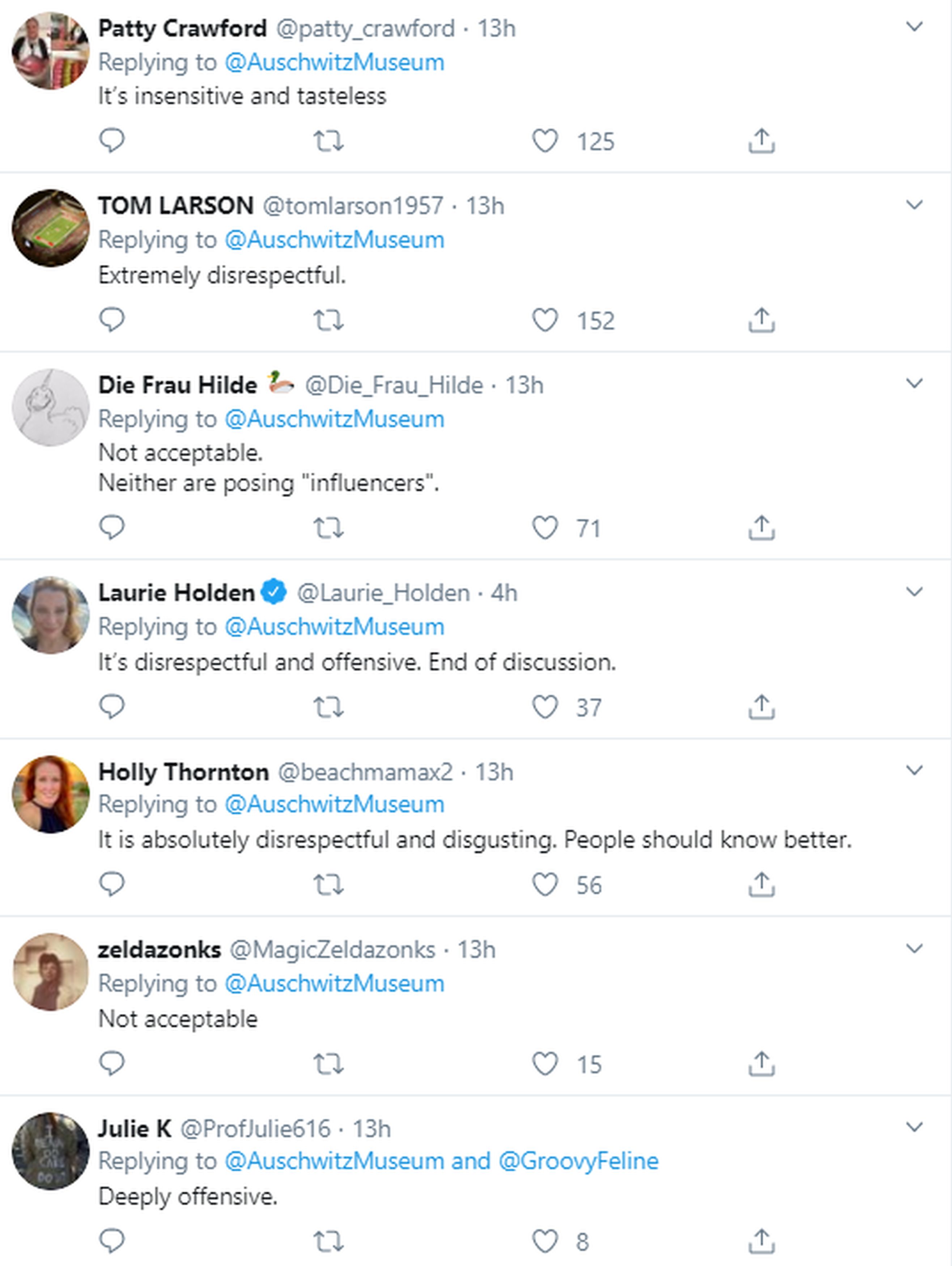 Kim Bennett Donald said: "I would ask that you take this down.

"Please consider the feelings of the many millions of people who were directly and indirectly impacted by the Holocaust."

Jim Rich Smith said: "Please remove this post. I’m sure you meant no disrespect but this is not appropriate.

"Auschwitz should be immune to self-promotion and remain as a memorial only to those who were incarcerated there, and their families." 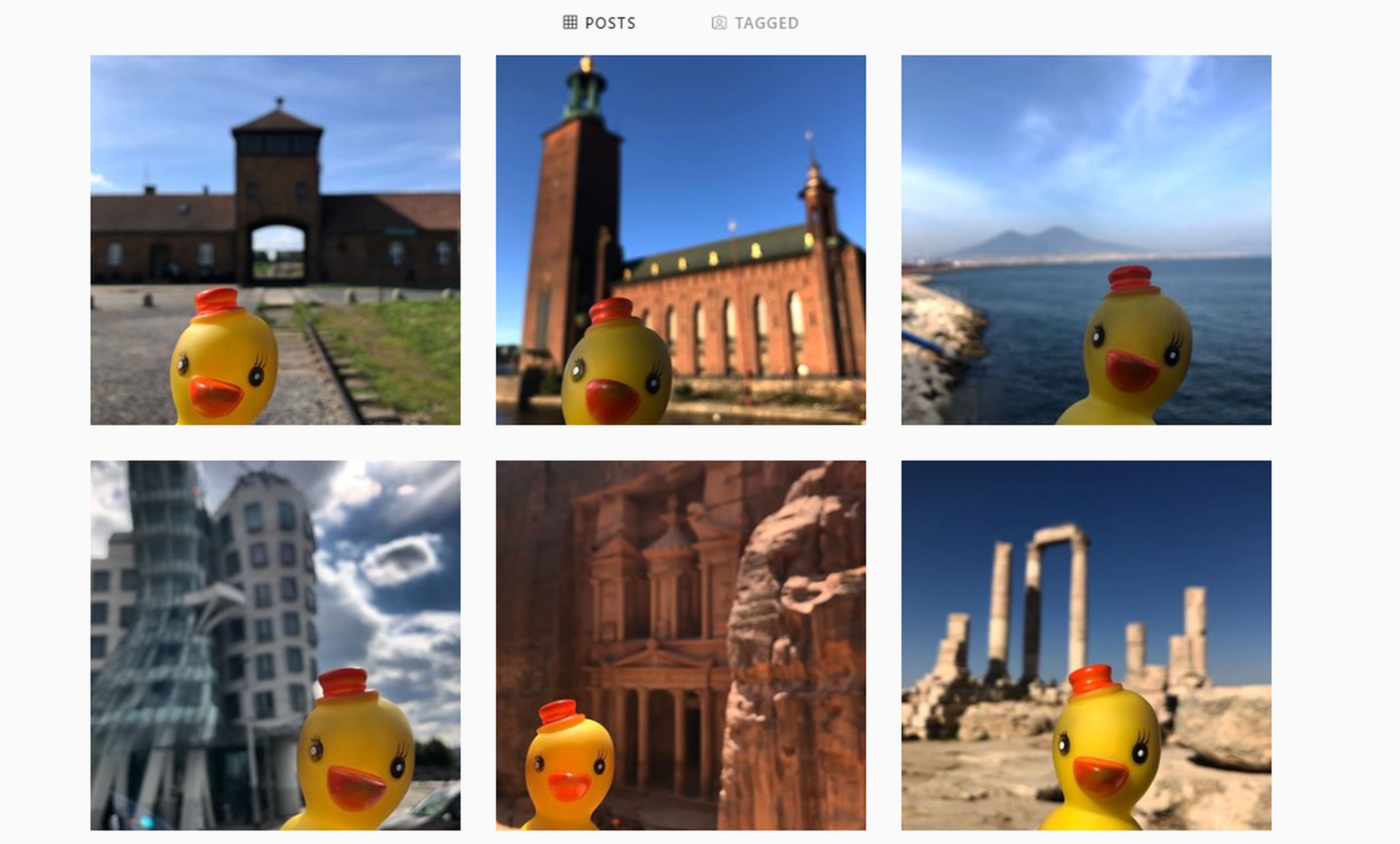 Jascha Beuttler said: "This picture is so wrong in so many ways…please take it down.

"Auschwitz-Birkenau is not a place for "joyful" ducks. Please be respectful."

Peasweat said: "Put it in the rubbish bin. No discussion is necessary. Auschwitz is not an Instagram playground."

An account called Common Sense on Twitter said "@AuschwitzMuseum is not a fun tourist destination or cool looking building. It is a memorial site.

"It is a place to soberly reflect on the millions of human beings who suffered and died at the hands of others. He is treating it as just another photo opp. Callous and shameful."

The travel blogger @AtukApil said: "I do not think that you can not take photos in that place, or that you can not write books or songs, and in the end the post what it has is historical information, it does not make apologies or jokes or anything.

"I think that the point is in the context, that it is banalized instead because first, it is a duck and that unquestionably takes away seriousness, second the objective of the account is to present tourist sites and not give information about history or about things related to the Holocaust and certainly things that have to be in different places are mixed.

"But anyway, the context, because even if it was another fictional character, we are going to put a monkey who has an Instagram account to promote the historical memory of different events, I would not see that a photo is taken in Auschwitz and put exactly the same message. The problem is that the photo was taken in a place where it does not belong and is being denatured." 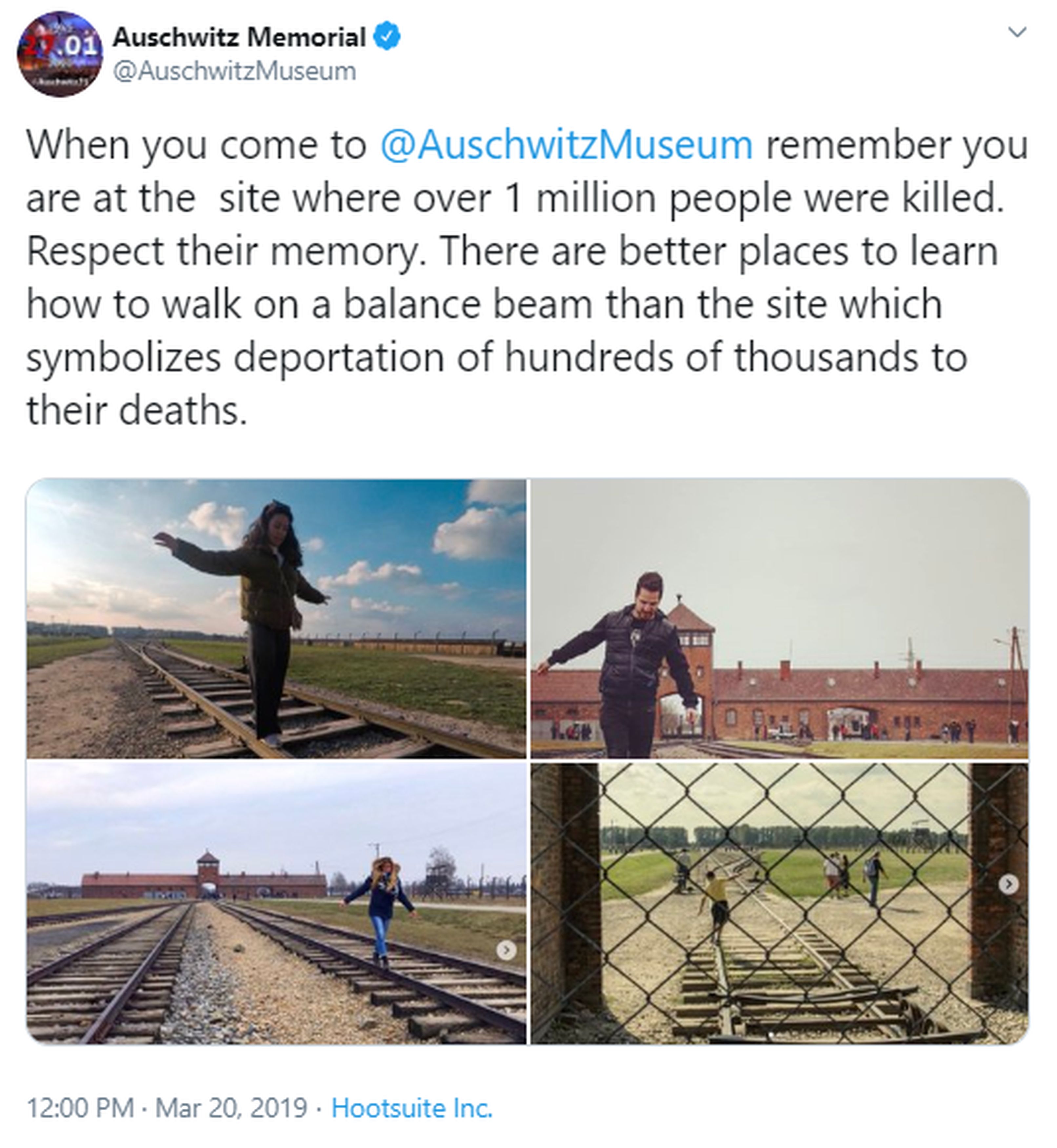 This isn't the first time museum staff have been forced to call out the inconsiderate behaviour of visitors.

In March 2019, the museum tweeted warning people to avoid 'balancing' on the train tracks where over one million people were killed.

The museum account wrote: "When you come to @AuschwitzMuseum remember you are at the site where over one million people were killed. Respect their memory.

"There are better places to learn how to walk on a balance beam than the site which symbolises deportation of hundreds of thousands to their deaths."

An Instagram couple were slammed for posing over the edge of an infinity pool with a 40ft drop.

The same couple were accused of being "irresponsible" for doing a similar photo – this time over the edge of a cliff.

Other dangerous photos included a young woman posing in front of a moving train and a guy sitting on the ruins of Pompeii for a photo.