Why I fell in love with Scotland’s weird customs: How an American tourist did all the ‘wrong’ things on a visit… and wowed the world with his zany take on the country’s quirky way of living 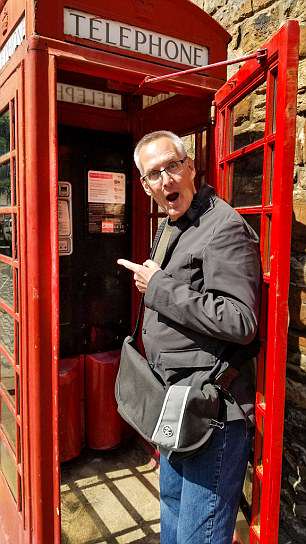 It is many a tourist’s desire to find the road less travelled, a willingness to jump off the beaten track that often can pay unexpected dividends.

And for US photographer Christian DeBaun, this included an unexpected free return trip, courtesy of Scotland’s tourist chiefs.

He was simply indulging his natural curiosity when he began compiling an online humorous list of cultural and social differences he had spotted while on a road trip around Scotland to celebrate his wife Rochelle’s 50th birthday.

And his eye for unexpected Scottish customs and habits, such as the tradition of buying a round in the pub, caught the eye of bosses at VisitScotland.

They felt his blog was the perfect way to encourage his fellow Americans to cross the Atlantic to holiday here – so they invited the couple to make another trip, on them.

When Mr DeBaun began his blog, it was his first time in Scotland and he was keen to document some of our more endearing quirks, and poke gentle fun at our occasional faults, by shunning the popular selfie hotspots.

After covering more than 1,300 miles by hire car from the Central Belt to the Orkneys, he produced a blog highlighting the ‘ridiculously rainy and windy’ climate and the unwillingness of hotels to provide hairdryer sockets in bathrooms or a waste basket any larger than a ‘coffee can’ in their rooms.

His observations from that September 2016 trip went viral after he posted them on Facebook, revealing to a worldwide audience his preference for Glasgow over Edinburgh, his readiness to plunge wholeheartedly into the mayhem of an Old Firm day – and his delight at discovering virtual strangers standing each other drinks in the pub.

‘I never imagined the response I would get to the list,’ he says. ‘My wife is a travel agent and has travelled extensively so that when she recommends places to her clients she has a better idea of the climate, the food, the culture, the music, the religion, everything. 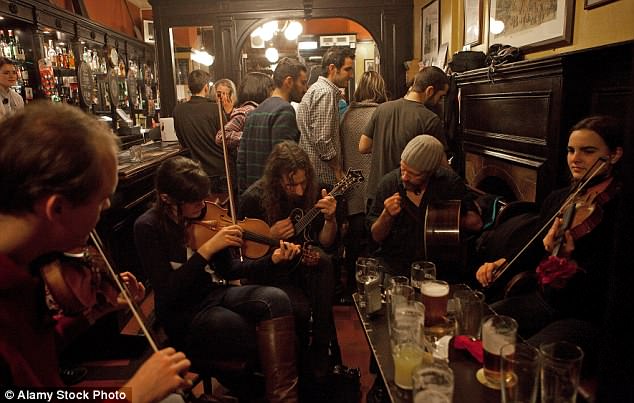 Folk tradition: The pub – and the all important round – was a huge hit

‘It just makes you a more wellrounded travel agent. Sometimes it makes it easier to notice different customs. We were immediately struck by the friendliness of Scottish people and we are honoured to be asked to work as ‘travel influencers’ for  VisitScotland in the hope of introducing more Americans to the wonders of your great country.’

Last time, the couple headed from Edinburgh, taking in Pitlochry, Inverness, John O’Groats, Orkney, Skye, Glencoe and Glasgow. This time, they have revisited many of those places, but the focus has been on talking to locals rather than seeing the sights.

‘I have been chatting to people about their lives and jobs and so forth,’ Mr DeBaun says. ‘I have avoided politics, but Brexit and Indyref 2 did come up once or twice, as did Trump. When people ask about him, I just say, ‘I’m terribly sorry’, and change the subject. People seem quite forgiving.

‘We’ve been fly-fishing near Perth, then up to Kirriemuir so I could kiss the Bon Scott statue on the cheek because I’m a huge AC/ DC fan, then we did chocolate making with Cocoa Ooze’s founder Jimmy Hutcheon in Aberdeen.’

Mr DeBaun, 56, was especially excited to return to Glasgow, sharing a fondness for Scotland’s largest city with his countryman, the late lamented celebrity chef Anthony Bourdain, who once memorably described it as ‘notorious for its hard drinking, hard living, hard ass citizenry – and its uniquely merciless sense of humour’. 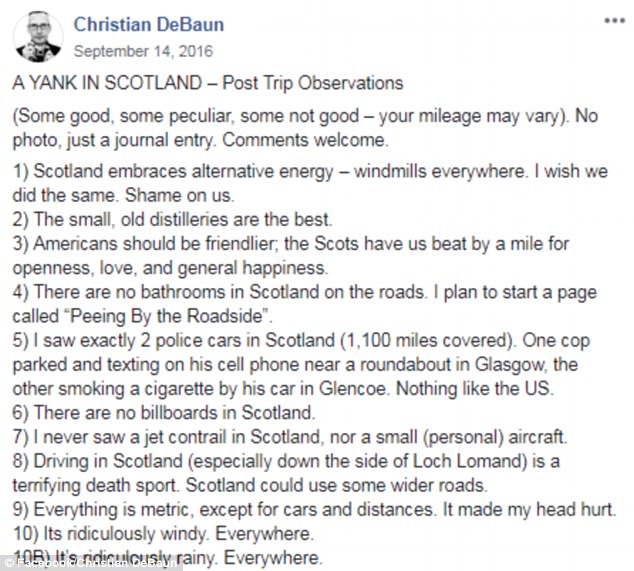 In 2016, the DeBauns found themselves touring Glasgow on an open-topped bus during the buildup to an Old Firm match.

He recalls: ‘Every time we stopped outside a pub, the guys would start cheering and they would see me with a camera and they’d wave and hoot and holler. It wasn’t until later that somebody said you have to be very careful what colours you wear to what pubs.’

Later that night, the couple braved an Irish bar close to the city’s Central Station.

I said, ‘Wow, that sounds like trouble – let’s go in and have a drink!’

‘There was a loud rock band playing and the floor was so sticky it would pull the tread right off the soles of your shoes.

‘And if you’ve seen the movie Trainspotting, you can imagine what the toilets were like! We still had a wonderful time.’

His most cherished memory of Scotland – apart from the stunning vistas – was the warmth of welcome the couple encountered at the Clachaig Inn at Glencoe, a well-known haunt of the mountain climbing community.

On his blog, he posted: ‘I wish America had the ‘buy the next round of drinks rule’. I did it for some lads about to climb Ben Nevis the next day for charity, and it was one of the best memories from my trip. We are now friends!’

He adds: ‘Buying a round really doesn’t happen in America. It might happen between two or three old friends, but in Scotland it seems to happen among groups, some of whom hardly know each other. 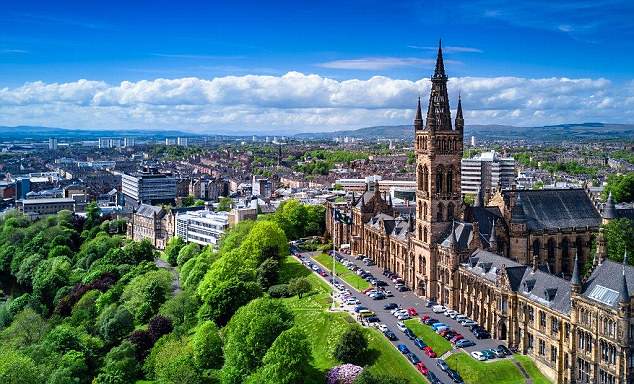 In 2016, the DeBauns found themselves touring Glasgow on an open-topped bus during the build-up to an Old Firm match

Last time, when we were in the Clachaig Inn, there were a bunch of guys playing pool and I decided I wanted to get in on the action.

‘I bought the next game of pool and pretty soon people were buying rounds of drinks. It was just a great example of the friendliness and camaraderie in the country. We’d love to see more of this in the States.’

Other observations would have his growing band of social media followers nodding enthusiastically, including his assertions that the Scots ‘invented almost everything that is cool’ and that ‘driving in Scotland (especially down the side of Loch Lomond) is a terrifying death sport’, while his exasperation with British electrical safety standards may leave them scratching their heads.

‘In America, you just plug your device in and away you go. Why would I need a switch on the socket? It’s like the shavers-only rule in the bathroom. When was the last time you saw anyone use a corded shaver? Rochelle’s been driven mad because she cannot use a hairdryer in the bathroom.

‘Meanwhile, at the canal locks at Fort Augustus, the sides are totally unprotected. I mean, a little child could just fall into the water. In the States, there would be security cameras, railings, chain link fences, all these things, danger and warning signs all over the place, so the Scots live dangerously compared to Americans. But I just don’t understand this shavers-only rule in the bathroom.’

Mr DeBaun is still collating a new list of observations from his latest trip, but says: ‘I’m keeping them to myself right now, although one thing I will say is that Scots don’t really go in for bumper stickers on their cars.

‘I got a bunch of my own printed out with the words ‘Haste Ye Back’ and I’ve been passing them out to people. I think a couple of restaurant owners said they were going to put them on their front doors. I’m still not sure any will end up on cars, even though they’re free.’

It seems that some things will never quite translate across the Atlantic, although Mr DeBaun is still hopeful the concept of the ’round’ will catch on.

He reflects: ‘We were always received with warmth and graciousness across this beautiful country. If you are ever in central Virginia, look me up. Dinner and a pint will be on me.’

On behalf of Scotland, we’ll hold you to that!