Greece has reopened to many overseas visitors, including from the United States, jumping ahead of most of its European neighbors in restarting tourism, even as the country’s hospitals remain full and more than three-quarters of Greeks are still unvaccinated.

It’s a big bet, but given the importance of tourism to the Greek economy — the sector accounts for one quarter of the country’s work force and more than 20 percent of gross domestic product — the country’s leaders are eager to roll out the welcome mat.

And although the U.S. State Department recently added Greece to its long list of countries with the designation “Level 4: Do Not Travel,” Greek officials maintain that — with social distancing measures and testing protocols, alongside the warming weather — tourism in the country will be safe, for visitors and residents alike.

In easing its border restrictions, Greece has jumped ahead of a broader European Union reopening to tourists from outside the bloc, but the country is not alone in pushing the timeline. Among European Union members, Croatia and Cyprus have also already opened to vaccinated and Covid-negative tourists, including from the United States. And President Emmanuel Macron of France announced last week that, if the country’s epidemiological situation allows, the country will open on June 9 to all non-European Union visitors, provided that they carry a “health passport,” details of which have yet to be announced. Outside the European Union, but still within Europe, Iceland, Montenegro and Serbia have already taken steps to ease their border restrictions, including for American visitors.

“We welcome a common position” on restarting tourism in the European Union, Greece’s tourism minister, Harry Theoharis, said in an interview. “All we’re saying is that this has to be forthcoming now. We cannot wait until June.”

According to the current rules, visitors arriving from the United States, the European Union, Britain, South Korea, Australia and a handful of other countries are now allowed quarantine-free entry into Greece, on the condition that travelers provide proof of Covid vaccination or a negative PCR test taken up to 72 hours before their arrival. Arriving visitors may also be subject to random, obligatory rapid tests at the airport; anyone with a positive result will be required to quarantine at a Greek hotel along with their traveling companions for at least 10 days, at the expense of the Greek government.

The new terms of entry were applied to tourists from the United States and several other countries as of April 19; they are expected to be extended to all visitors on May 14. 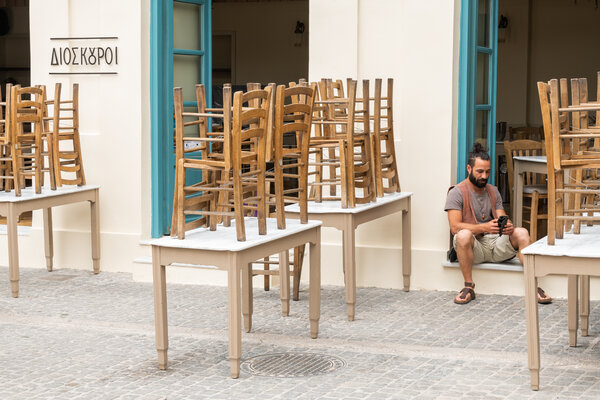 A “wait and see” mode

Anyone coming from the United States will have plenty of ways to get to Athens. On May 28, Delta Air Lines is resuming direct daily service between New York’s John F. Kennedy International Airport and the Greek capital; American Airlines, United and Emirates will follow suit in early June, offering direct service from New York-area airports. Direct flights to Athens from Chicago, Washington Dulles, Atlanta and Philadelphia will also come online for the summer travel season.

But how many of those seats will be filled remains to be seen.

“A lot of people are still in a ‘wait and see’ mode,” said Chantel Kyriakopoulou-Beuvink, the director of Natural Greece, a tour operator based in Athens that works primarily with clients in the United States and Europe. She noted that several bookings for May tours had been canceled, although most clients had asked for their payments to be put toward future trips. She added that reservations have already come through for summer and autumn tours, but many potential clients are still holding off on booking.

They may not have too long to wait. The summer ferry schedules to the Greek islands have recently been published — earlier than usual, Mrs. Kyriakopoulou-Beuvink noted. She added that the ferry services have increased compared to the 2020 summer season, and that the Sporades Islands — which include Alonissos, Skiathos and Skopelos — were particularly well served. All ferry passengers will be required to complete a health status questionnaire before boarding, and occupancy will be kept to about half of the normal numbers, although that limit may be adjusted as the public health situation evolves.

On the ferries or otherwise, anyone who decides to make the trip to Greece should expect to see plenty of public health measures in force.

Greece has been in various stages of lockdown since November, with residents subject to a curfew and limits on movement within the country. Shops, schools and cultural institutions have been forced to close, while restaurants and bars have been limited to takeaway service only.

The restrictions gutted the lively cafe culture in Athens, where the past winter was even quieter than usual, said Georgia Nakou, a political and economic analyst for the media outlet MacroPolis. But compliance with the rules has slackened as the weather has warmed, and many Greeks have begun congregating in large numbers in the squares of central Athens. Everyone, it seems, is ready for a break.

While Greece’s lockdown restrictions are due to be lifted by the time the country fully opens to tourists on May 14, visitors should still expect to encounter social distancing measures, the country’s tourism minister said. Tables will be widely spaced at restaurants; lounge chairs will be farther apart on the beach; masks may be obligatory on some city streets; hand sanitizer will be in plentiful supply.

Open-air archaeological sites like the Acropolis in Athens have already reopened to the public, with masks required of all visitors. Museums — including the National Archaeological Museum and the Acropolis Museum — will reopen on May 15 with social-distancing measures that are still being determined, a spokeswoman from the tourism ministry said.

Hotels are also subject to public health protocols, including weekly rapid testing of staff and mandatory mask wearing in common-use areas. The minister stressed that all social-distancing rules and other public health measures will apply to visitors and residents alike.

“Tourism — and food — is our only industry”

Protecting Greek citizens from the coronavirus is a priority, the minister said, but so is shielding them from the devastating effects of a prolonged economic decline. And last year’s plunge in tourism numbers hit the country hard: The national economy shrank by 8.2 percent in 2020, making Greece among the worst-hit countries in Europe. The tourism sector took the brunt of the blow: In 2020, Greece’s revenue from foreign tourism fell to a quarter of the more than 18 billion euros (nearly $22 billion) registered the year before.

“The last year felt like a nuclear explosion in our society,” said Kostas Tzilialis, a co-owner and co-worker at Locomotiva Cooperativa, a cafe and bookshop in central Athens. Mr. Tzilialis estimated that, before the pandemic, tourists accounted for up to 40 percent of daytime guests at the cafe. The business has managed to survive the pandemic by offering takeaway service, processing online book orders and receiving some government support — but it hasn’t been easy, he said, adding that many of his friends have suffered severe financial and psychological problems over the past year. On the reopening of tourism, he thought the government didn’t have a choice.

“Unfortunately, after more than 10 years of economic hardship, tourism and food is our only industry,” Mr. Tzilialis said. “We don’t produce cars or machines. So we have to open our industry right now. Let’s hope that people will be careful and the vaccines will protect us.”

Most Greeks — who have endured months of lockdown — would agree with that sentiment, said Ms. Nakou, the analyst. “I think there is little alternative, to be honest, given the importance of the sector in the economy,” she said.

But Ms. Nakou noted that Covid case numbers rose after the country’s opening to tourists last summer, and that many Greeks associated the arrival of visitors with an increase in the circulation of the virus. She noted that in a survey conducted among Greeks last fall, tourism was the most commonly cited factor in causing the second wave, ahead of people flouting lockdown rules, as well as congestion in public transport or in restaurants.

“I think that is at the back of a lot of people’s minds locally,” said Ms. Nakou. “They’re pleased to see the economy reopening; they’re also quite worried about this.”

In terms of daily new infections, Greece’s worst moment of the pandemic came in early April of this year, when the country was averaging more than 3,000 cases per day; intensive care admissions reached their peak about two weeks later. On a per-capita basis, Greece’s experience pales in comparison to the worst moments of the pandemic in the United States, Britain, France or Italy, but because Greece’s medical system has suffered from years of underfunding, it is particularly vulnerable to strain. The country’s intensive care units were 87 percent full as of April 21, even as lockdown measures were due to be peeled away.

At the same time, vaccination is picking up. Just over 20 percent of the country’s population had received at least one dose of vaccine by the end of April. The coverage is much higher in some of the Greek islands, which were targeted early in the country’s vaccination campaign in part because of their geographical isolation and limited medical facilities. But local leaders also hope that the image of heavily vaccinated, “Covid-free islands” will help to lure tourists back.

“It’s a very important step that guarantees the launch of the tourist season and sends a message of optimism,” Efi Liarou, the mayor of the island Elafonisos, told Agence-France Presse last month.

However many people end up traveling to Greece this summer, it’s clear that this year’s peak tourist season will be unlike any other.

“I think anyone coming here should acknowledge that it’s not going to be like 2019,” said Ms. Nakou. “Don’t expect that you’re going to be able to blow off steam like this never happened. Because it’s not over yet.”