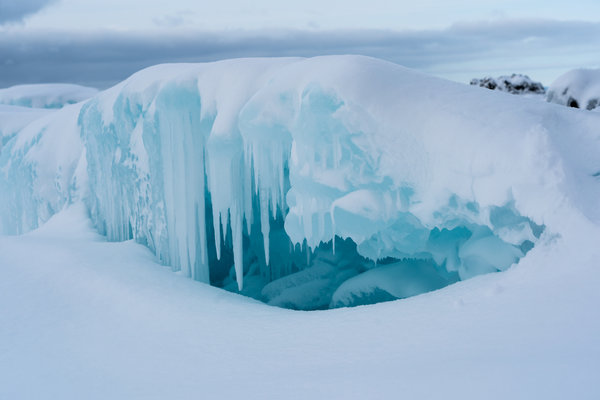 Our columnist, Sebastian Modak, is visiting each destination on our 52 Places to Go in 2019 list. His trip to the Ontario Ice Caves required a 12-hour drive from Detroit in whiteout conditions.

The ice caves of Ontario, Canada, accessible via the Trans-Canada Highway that skirts the shores of Lake Superior, are on the 2019 list of 52 Places to Go for a disheartening reason. Like any phenomenon dependent on ice, cold and weather patterns, the caves are under threat from climate change. This, even though the lakeshore gets reliably pounded by snow every year thanks to a lake effect that sends wind hurtling toward nearby mountains, which then spark heavy precipitation. The International Joint Commission, a binational organization that manages and protects boundary waters between the U.S. and Canada, predicts that Lake Superior could be completely ice-free in the next two to three decades.

For now, most winters, the wind, waves, and bitter cold combine to form the ice caves, though there have been winters when they don’t happen at all and others when a multitude of them soar 20 feet high.

To see them now, before they’re gone, felt like an immense privilege — even as I was forced to confront the contradictions that arise from the amount of carbon I expended getting to them. Searching for the caves was a travel experience that is increasingly rare for other reasons. There are no signboards. I didn’t come across any organized tours to the caves and going out on the ice in search of them is dangerous. Mother Superior, as I heard more than one local refer to the lake, has sunk hundreds of ships — she’d have no qualms, I’m sure, in sinking me too.

Ice caves aren’t the only formations sculpted by Lake Superior. I saw piles of cracked surface ice that looked like discarded windows, basalt rock walls slicked over with thick layers of ice, and delicate snow-covered formations like this one at Flour Bay.

Even many locals don’t know how to find the ice caves, so going with an experienced guide is vital, as is making sure you are properly equipped with more layers than you think you need and snowshoes. Ellen Van Laar, a musician and visual artist who lives on the shore of the lake near Coppermine Point, runs Arts and Adventure, a retreat center. She provides parking for a fee and will occasionally organize tours around the lake.

Some lessons learned? Don’t walk on anything you aren’t 100 percent confident is either land or very thick ice; wear snowshoes and, if you have a guide, follow in their tracks from a safe distance; and always err on the side of caution.

Accommodations near the ice caves are scarce. Some of the closest hotels and lodges are closed for the winter. But Stokely Creek Lodge, a collection of rustic cabins surrounded by 60 miles of cross-country ski and snowshoe trails, is about 30 miles from the nearest ice caves.

Some ice caves, like this skull-like formation in Coppermine Point, are rock caves that over time are covered by layers of ice.

Jeff Dixon, a Sault Ste. Marie-based photographer who creates stunning pieces of art from photographs of the caves, took me out in search of them one day and warned me about the bridges. “You don’t even know you’re on them half the time — you think it’s a solid 30-foot mound of ice and it’s not. If it breaks, you fall and there’s no way to get out,” he said.

The cross-country ski trails near Sault Ste. Marie are some of the best on the continent. “Once you’ve skied here, so many other trails become underwhelming,” said Gaylen Byker, who along with his wife has owned the Stokely Creek Lodge since 2007 but has been coming to its trails for 40 years.

The winters are still bitterly cold along Lake Superior, the cross-country trails are still refreshed daily with falling snow, and the ice is still there. But to watch the ice caves, like this one at Coppermine Point, forming serves as a poignant reminder of how fragile their existence is.

There’s something addictive about this kind of travel, the kind that still drips with adventure and the feeling of not knowing what you’re going to find. “I didn’t even know about the ice caves growing up,” Mr. Dixon told me. “I only found out about them when I started exploring up here and it took me a while to get the courage to get out onto the lake. And then all of a sudden you’re hooked and you wait for it year after year.”