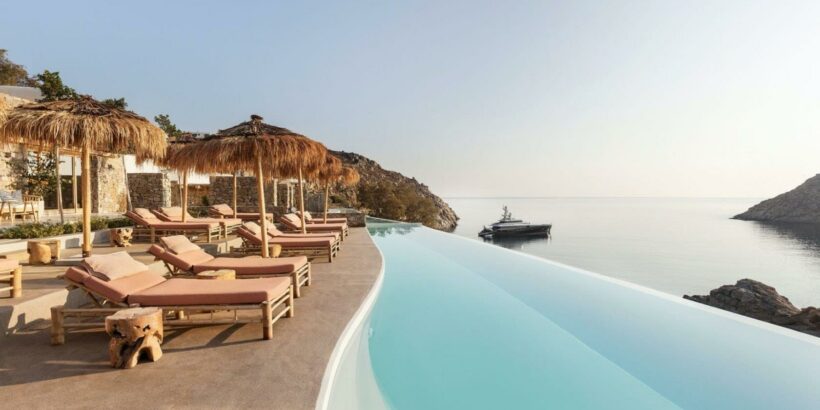 As Stylist’s digital writer, Lauren Geall writes on topics including mental health, wellbeing and women’s issues. She’s also a big fan of houseplants and likes to dabble in film and TV from time-to-time. You can find her on Twitter at @laurenjanegeall.

Mykonos may be famous for its bustling nightlife and lively restaurants, but a new wave of hotels is giving tourists the chance to embrace a slower pace of life. Stylist’s Lauren Geall took a trip to the island to check it out.

There’s nothing quite like a trip through Gatwick Airport at 5am on a bank holiday weekend to place you in dire need of some peace and quiet – although that’s not always the first thing people think of when they picture a classic trip to Mykonos.

Located in the middle of the Aegean Sea in the heart of the Greek Cyclades island group, Mykonos has long been known for its vibrant nightlife. But over the last couple of years, there’s been a shift. Mykonos is still the lively destination it’s always been, but a growing number of boutique, luxury hotels are setting up shop in a bid to showcase the slow-paced lifestyle the island’s locals have been leading for generations.

I’m here to sample the delights of The Wild – a five-star hotel set on an amphitheatric cliffside on the island’s southeastern coast. Home to a collection of 40 suites and villas, the hotel only opened in 2019, but it’s already making a name for itself; during my stay, every room in the hotel is full.

But The Wild’s status has done nothing to diminish its charm. When I arrive, I’m greeted by the hotel’s resident cat Milos, whose paw prints can be found imprinted in the stairs that snake up the cliff to the rooms above.

This is a hotel with definitive style, and my room, located on the hotel’s first ‘level’, is no exception. Pared back and effortlessly comfortable, the interior style is an eclectic mix of wood, rattan and terracotta set against white walls and simplistic textiles, and it doesn’t take long for me to feel at home.

This non-manicured, welcoming style continues throughout the hotel, which is decorated with a variety of authentic Greek vases, bowls and art work – all of which were handpicked by the owners, brothers Philip and Alex Varveris.

But as tempting as it is to spend days soaking in The Wild’s charm, a true Mykonos experience isn’t without a trip to some of the island’s most charming spots. While The Wild has its own private beach (although you’ll have to tackle plenty of steps to get there), the island is home to plenty of sandy spots.

From left to right: the hotel foyer, the pool at sunset, the RAW and Milos’ paw prints.

For a taste of something even more ancient, however, there’s no place like Delos – a small island located a 20-minute boat ride away from Mykonos’ south-westerly tip. Entirely uninhabited, the entire island is a designated UNESCO world heritage site, thanks to the incredible array of monumental antiquities that can be found on its surface. Rumoured to be the birthplace of Apollo, a trip to Delos is a true once-in-a-lifetime experience.

Once you’re back on Mykonos, you’ll want to find time to sample all the incredible food. As a lover of Greek food, I was particularly excited to try out The Wild’s flagship restaurant, Taverna, which serves a range of traditional dishes including one of the best Greek salads I’ve ever had.

From left to right: the view from breakfast, The Wild’s private beach, Ano Mera monastery and a house in Ano Mera.

The hotel’s second restaurant RAW – which only opened this year – is also a must-visit. Serving a fusion of Japanese and Mediterranean flavours, the dishes on offer were like nothing I’d ever tasted (in a very, very good way).

Further afield, Mykonos’ famous capital Hora (also known as Mykonos Town) is perfect for those looking for a livelier experience. Famous for its brilliant white buildings and pedestrianised cobbled streets, we took a trip there on my final night on the island – and as much as I loved the peacefulness of The Wild, it felt right to spend a night wandering among the bars and restaurants Mykonos is known for.

There’s a lot to take in here. A trip to the town’s iconic windmills is an absolute must, as is a visit to Little Venice, named as such because of the houses that balance precariously over the sea on its edge. The bars here offer incredible views – especially at sunset – but you’ll want to book to make sure you get one of the best spots.

From left to right: Lauren walking in the streets of Hora, the bright flowers, the white buildings and a view of Little Venice.

Once the sun’s gone down, you’ll want to start your search for food. Koursaros and Noa both come highly-recommended, but if you’re looking for something a bit different, you’ll want to check out Cine Manto – an open-air cinema and restaurant located in the centre of Mykonos Town.

There’s also Interni – also owned by the brothers behind The Wild. The food here is fantastic (I was a big fan of the wagyu beef souvlaki), but it’s the outlandish atmosphere – including the loud music and sparkler-filled performances from the waiting staff – that makes this place worth the trip.

At the end of the night (which became early morning), I was more than ready to slip back into the slow lifestyle that encompasses life on the other side of Mykonos. But I guess that’s exactly what The Wild is there to offer.

Rates at The Wild Hotel by Interni, Mykonos, start from £290 per room per night on a double room basis, including breakfast. www.thewildhotel.com

Fancy extending your trip? Here’s where to head next

Transform your trip to Mykonos into an extended Greek adventure by doing some island hopping. From the mountains of Naxos to the beauty of Santorini, the Cyclades have plenty to offer – here is our pick of the top 3 islands you can travel to by boat from Mykonos.

The view over the sea in Santorini.

There’s a reason why Santorini has become such a popular tourist destination – while there are certainly quieter islands to be found, the sunset off the coast of Oia is said to be among the best in the world.

It’s one of the furthest islands from Mykonos – the ferry between the two takes between two to three hours – but getting a taste of this iconic spot is well worth the wait.

Milos has a fascinating rocky coastline.

A trip to Greece isn’t complete without a dip (or five) in the sea – and Milos is the perfect place to do just that. Here, you can book a trip on the 40-foot sailboat Oneiro, led by captain and Milos native Elias Xydous and his wife Mary.

Once on board, you’ll get the chance to see a number of inaccessible beaches and caves, including the famous Skyia Sea Cave, as well as enjoy plenty of delicious food. Located around two and a half hours away from Mykonos, it’s definitely one to consider.

There are plenty of places to explore in Naxos.

If you’re in the mood for getting active, Naxos is the place to go. The largest of the Cyclades, Naxos’ mountainous nature means its home to a wide array of hiking routes and trails.

These include one all the way up to the summit of Mount Zeus – the highest mountain in the Cyclades at 1003m – and another to the natural beauty of Routsouna’s Waterfall. It’s close to Mykonos, too – jump on a ferry and you can be in Naxos within 40 minutes.