Off to a flying start: The stunning winners of the inaugural International Portrait Photographer of the Year competition revealed

The inaugural International Portrait Photographer of the Year competition has hit the ground running.

The winning and commended images – those ranked in the top 101 – have been revealed and they are truly mesmerising.

Peter Eastway, Chairman of Judges, said: ‘Who are the world’s leading contemporary portrait photographers? The aim of the International Portrait Photographer of the Year awards is to invite photographers from around the world to present their best work. In turn, we engage six acclaimed portrait photographers – this year David Burnett, Charmaine Heyer, Rocco Ancora, Martina Warenfeldt, Sanjay Jogia and Sarah Ferrara – to assess and deliberate, curating a body of work that is not only representative of the portrait art in 2021, but is inspirational for us all.

‘Our philosophy embraces the idea of a collection of photographs, putting as much emphasis on the Top 101 portrait photographs as the small number of prize winners. While our esteemed judges are undoubtedly experts in their field, even they acknowledge that the prize winners are a matter of opinion or choice, whereas the Top 101 portraits exhibit a level of quality and imagination that transcends personal bias. There is something for all tastes within this collection.

‘This is the first International Portrait Photographer of the Year awards. We hope you will enjoy viewing a very special collection of the best contemporary portrait photography of 2021.’

An e-book of the Top 101 photos will be available to order from internationalportraitphotographer.com. Scroll down to see MailOnline Travel’s pick of the bunch… 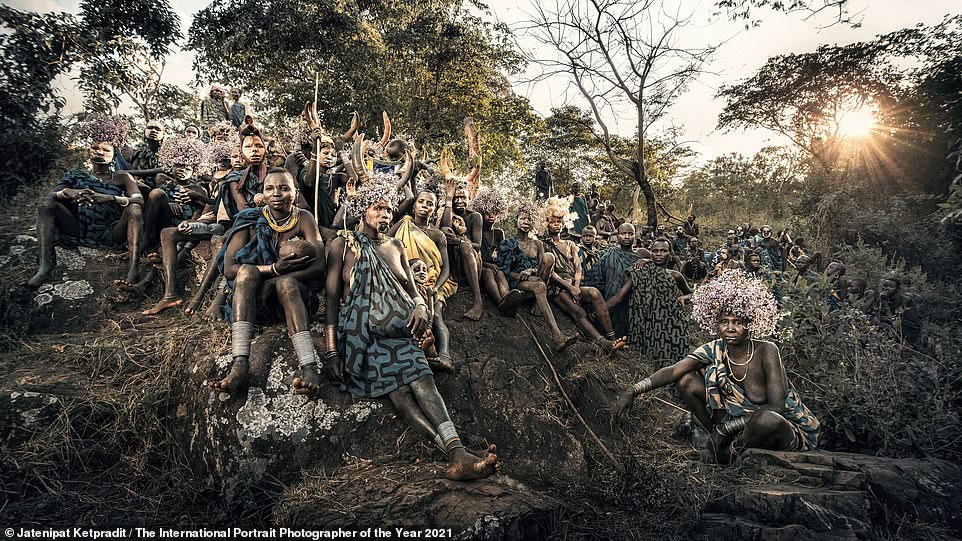 A stunning ‘Top 101 Award’ image by Jatenipat Ketpradit, from Thailand. He said: ‘I took this picture when I was in Ethiopia to visit the Suri tribe, who have lived in the Ethio-Sudan border area for many generations. This picture shows the whole family of their clan in their habitat’

American photographer John Powers is behind this ethereal picture of a trio of cormorant fishermen gliding down the River Li in Guilin, China. The image is ranked as a ‘Top 101 Award’ 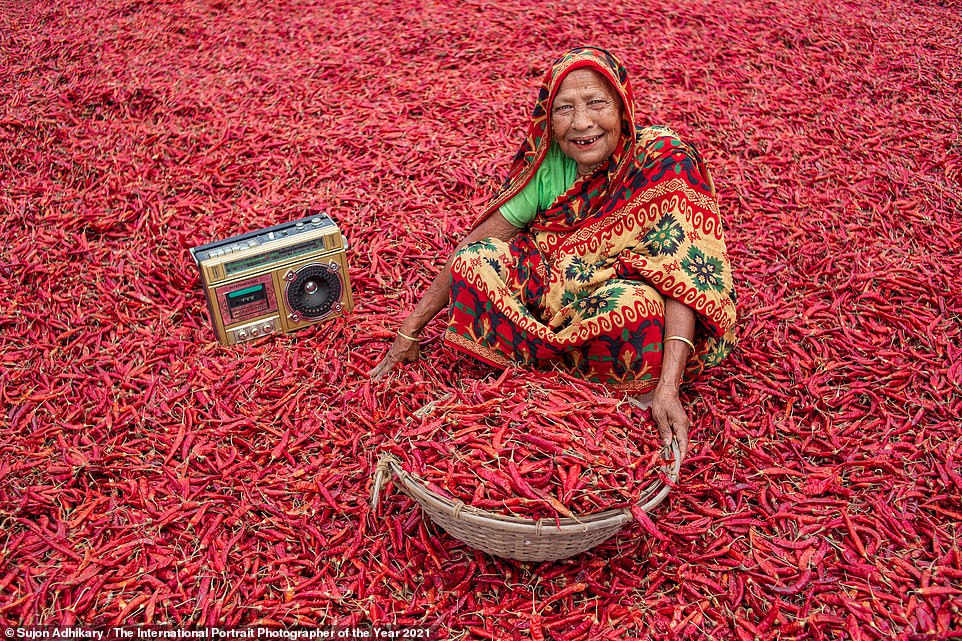 Sujon Adhikary, from Bangladesh, earns a ‘Top 101 Award’ with this striking picture of a chilli picker in an unnamed location. He said of the scene captured: ‘Women each with their own wooden bowl were examining thousands of chillies to weed out bad ones before they were sent to market. Some workers carry a radio with them so that they can hear religious songs while working and they can keep their minds away from boredom’ 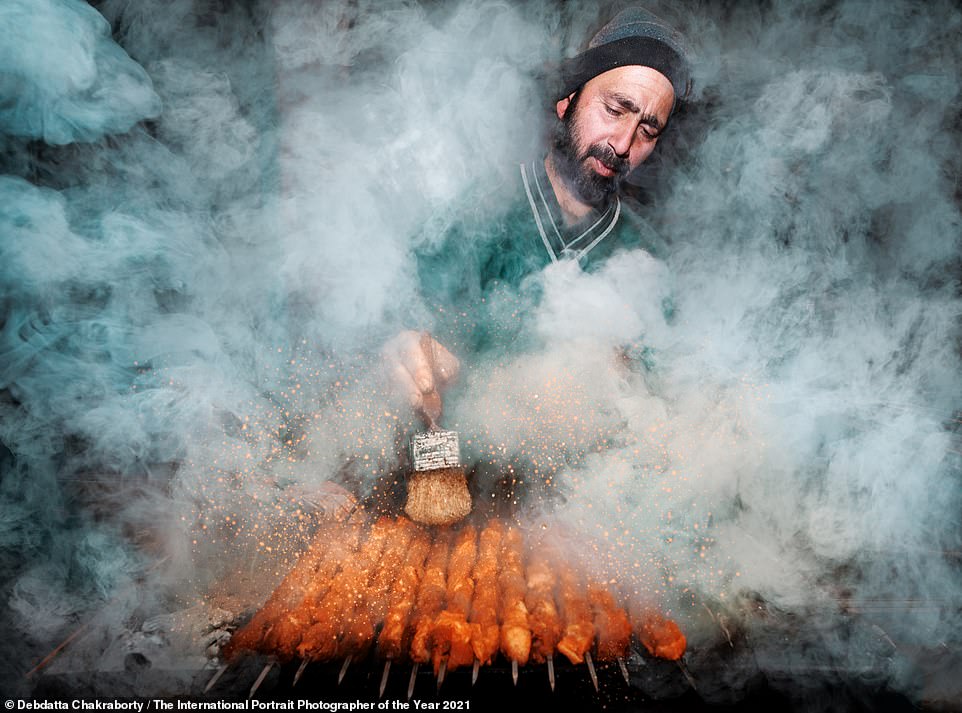 An incredible image of a kebab being cooked that the judges have rewarded with a Top 101 Award commendation. It was taken in Srinagar in the Jammu and Kashmir union territory by Debdatta Chakraborty, from India, who said: ‘Khayyam Chowk is a mundane alleyway in Srinagar. But with the sundown, this area bustles to life with the aroma of the wazwan-style kebabs, atypical of Kashmiri traditions. Kebabs are slow-cooked over a charcoal fire and the chefs take care to make them in the most succulent way’ 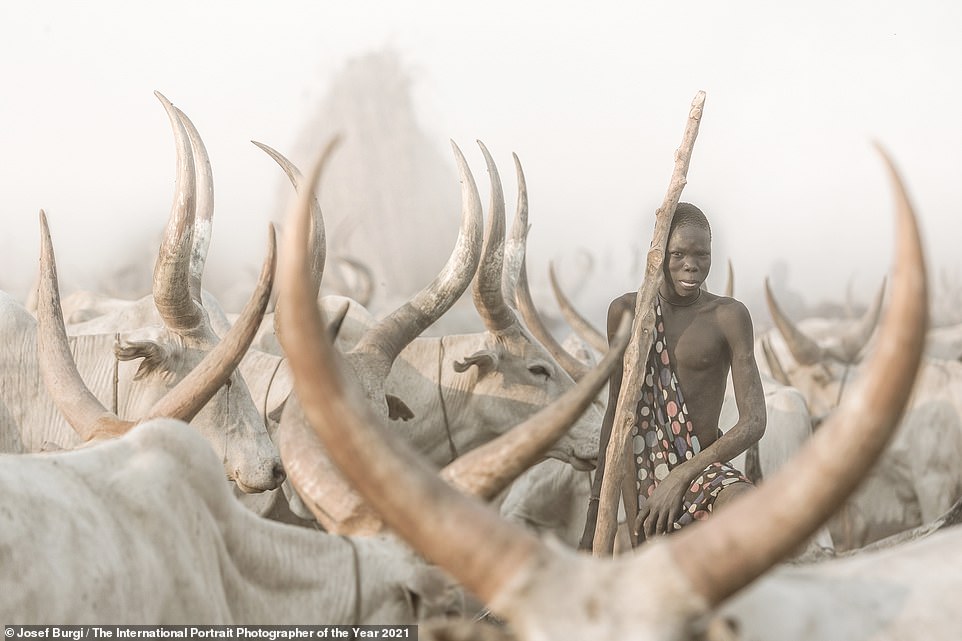 This mesmerising picture of a cattle herder in South Sudan is the winner of the Environmental Portrait category. It was taken by Swiss photographer Josef Burgi 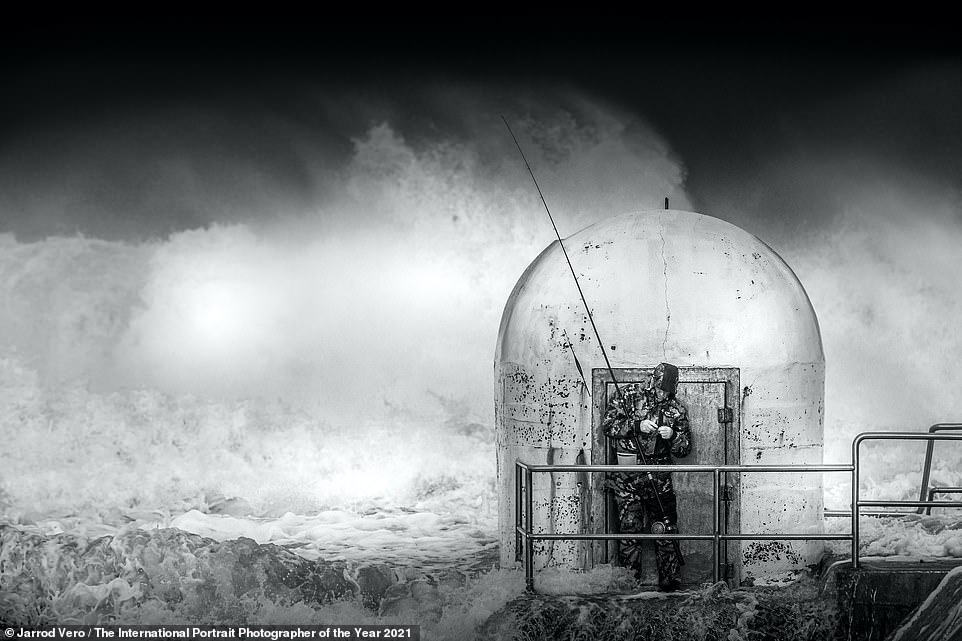 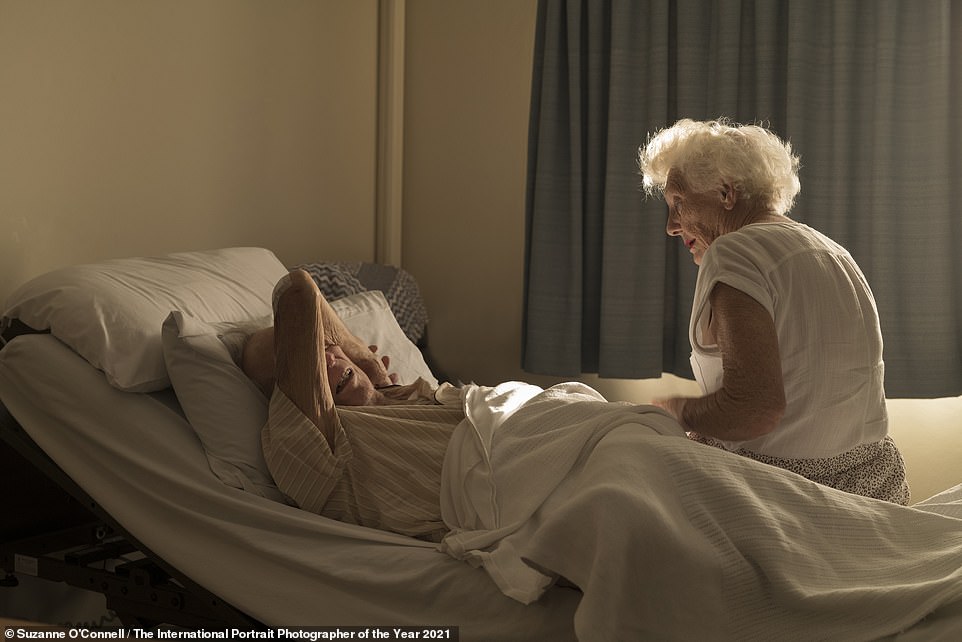 A heart-wrenching Top 101 Award image by Australian Suzanne O’Connell entitled Till Death Do Us. She said of the picture: ‘Mother, always the watchful caregiver, together with Father, built a life. And towards the end of his, her greatest strength was called upon. This image, days before my Father died, typifies their devotion – ever-present. They once said “till death do us part” and they stayed together until it did’ 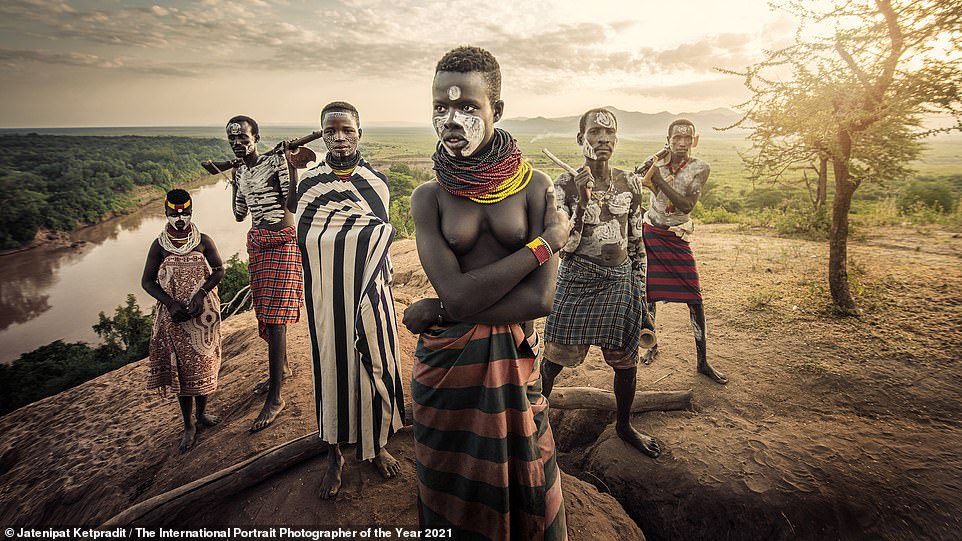 Another stunning Top 101 image by Jatenipat Ketpradit, this time of a Karo tribe family in Ethiopia that includes the father, mother, two brothers and two sisters. Ketpradit said: ‘The Karo tribe live along the Omo River [and] incorporate rich, cultural symbolism into their rituals by using ornate body art, headdresses, and body scarification to express beauty and significance within their community’ 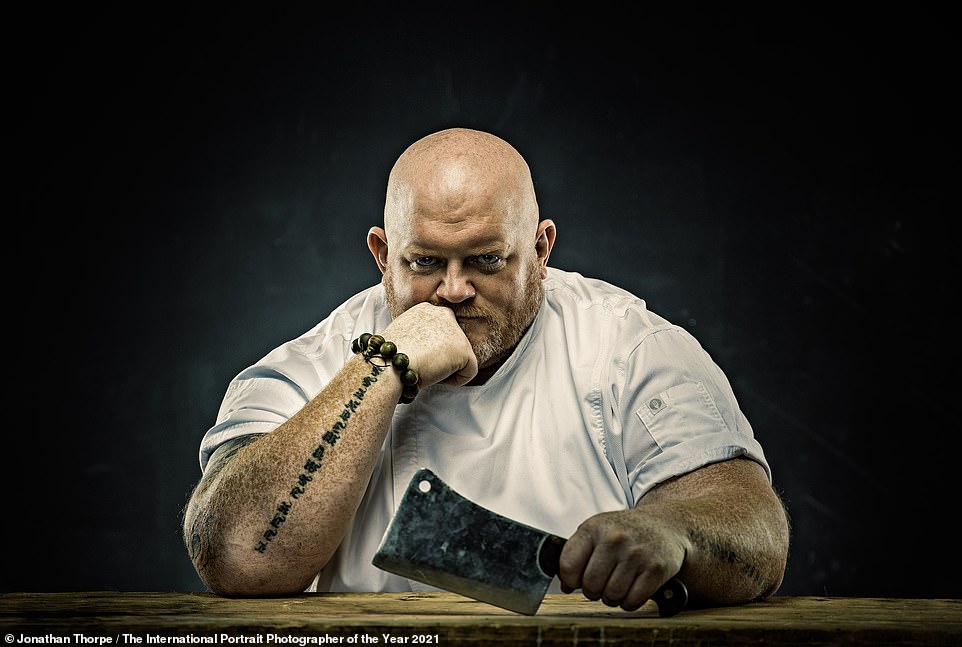 The judges have rustled up a Top 101 Award ranking for this picture of Irish-born Hell’s Kitchen chef Declan Horgan looking like he means business. The photographer is American Jonathan Thorpe 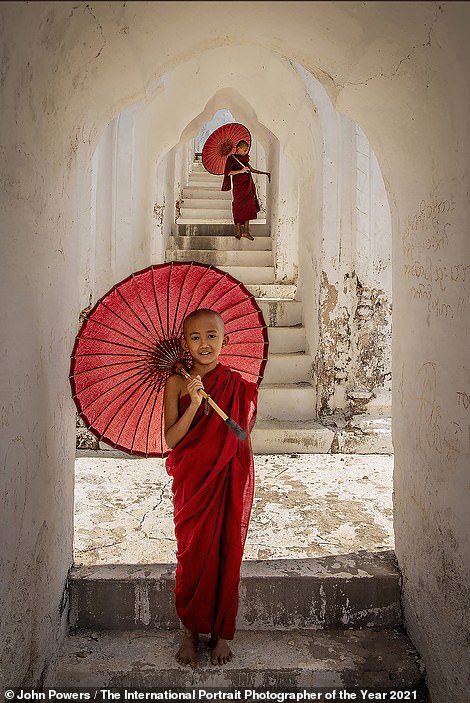 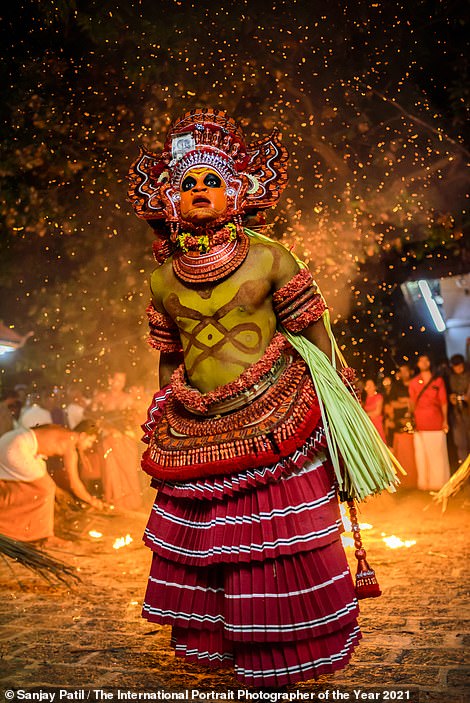 LEFT: Another beautiful Top 101 picture by John Powers. This entry shows novice monks in a temple in Myanmar. RIGHT: A Top 101 image called The Mystical Stare. It was taken by Indian photographer Sanjay Patil and shows a ritualistic performance at the Theyyam Festival in the state of Kerala in India 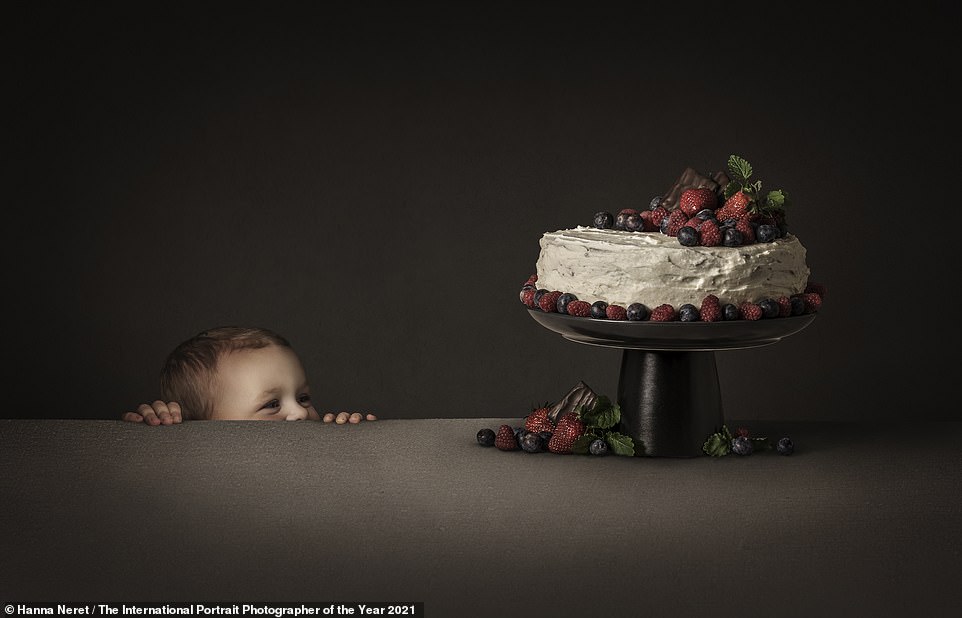 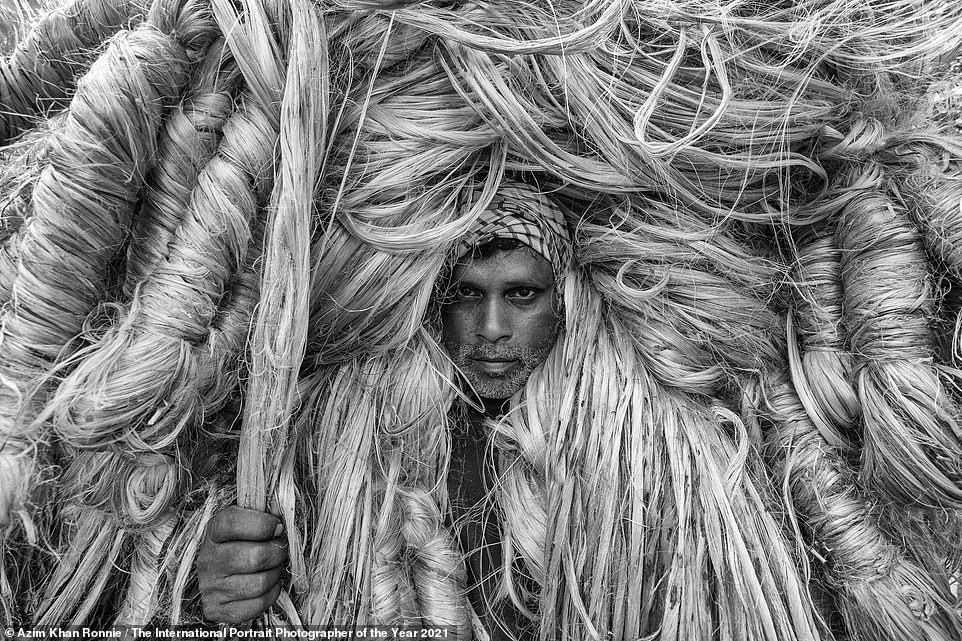 An amazing picture by Azim Khan Ronnie from Bangladesh. Describing his Top 101 Award image, he said: ‘Workers appear to be wearing large golden wigs as they carry a heavy bundle of jute fibre. Their bodies are enveloped with the heavy natural fibres, with only their faces visible as they each carry around 50kg of jute on their shoulders’ 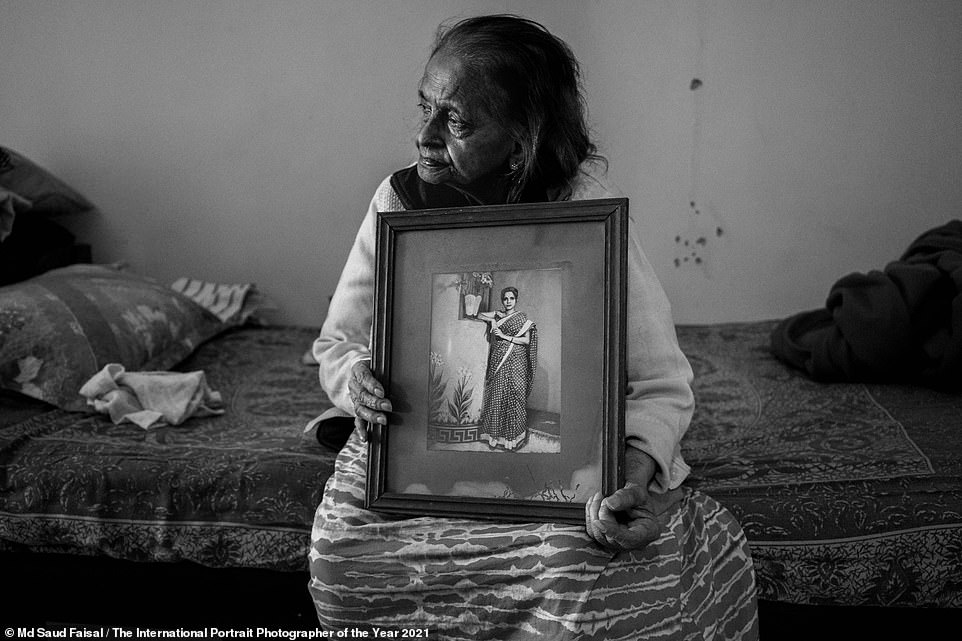 A poignant Top 101 image by Bangladeshi photographer Md Saud Faisal. He said: ‘My grandmother was posing with a framed photo of herself at a young age. She died during the pandemic when many families saw the loss of their family members’ 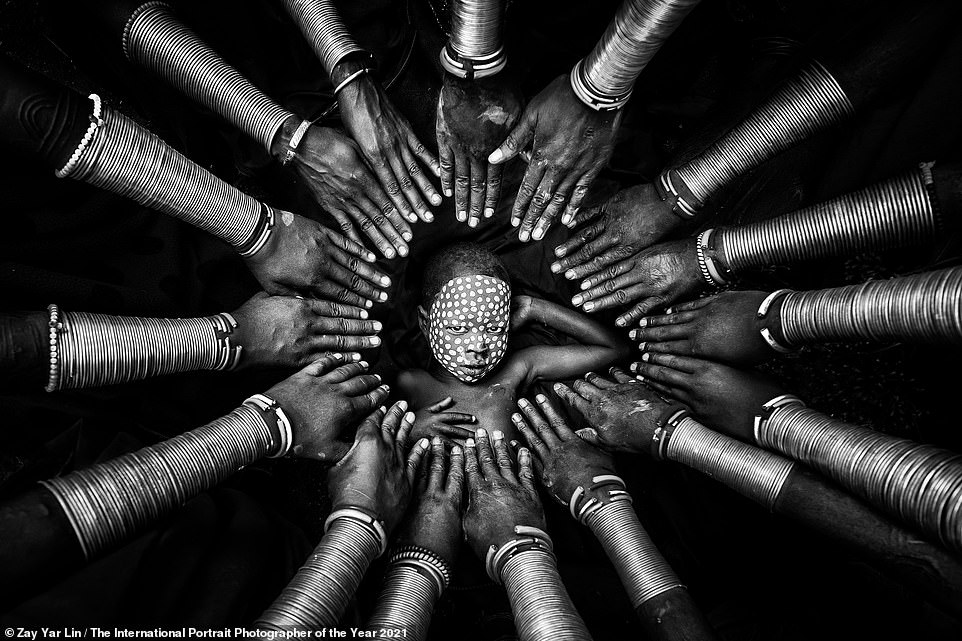 Zay Yar Lin from Myanmar is behind this Top 101 image of a young Suri boy in Ethiopia’s Omo Valley surrounded by Suri women, their hands decorated with bronze bracelets 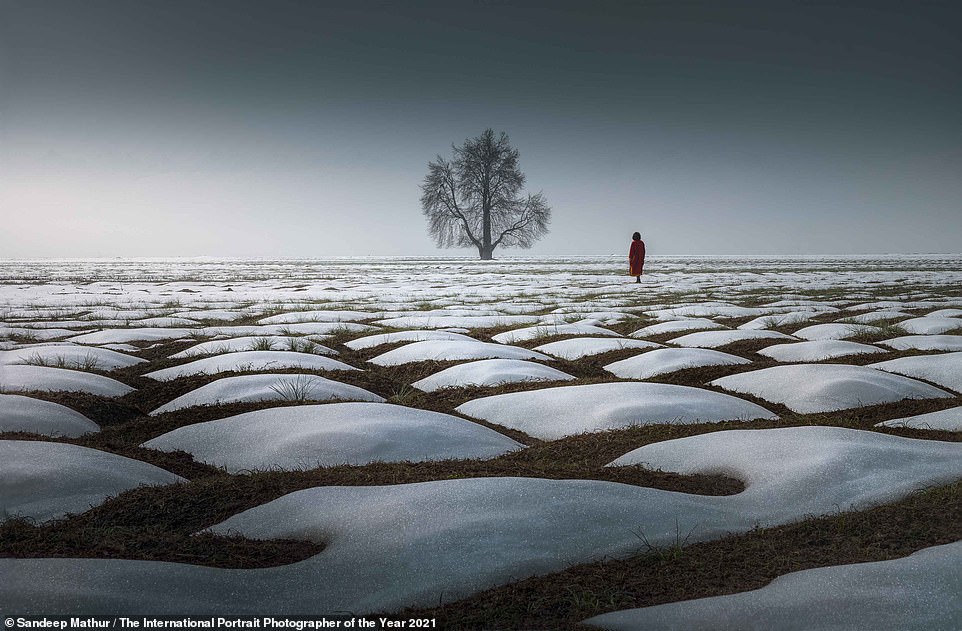 A Top 101 entry called Paradise Lost taken by Indian photographer Sandeep Mathur. Explaining the title, he said: ‘Kashmir may be a lost paradise. One of the most militarised places in the world and considered one of the most dangerous places in India, it is also commonly referred to as heaven on earth. There has been strife and tragedy. We hope for peace in the valley’ 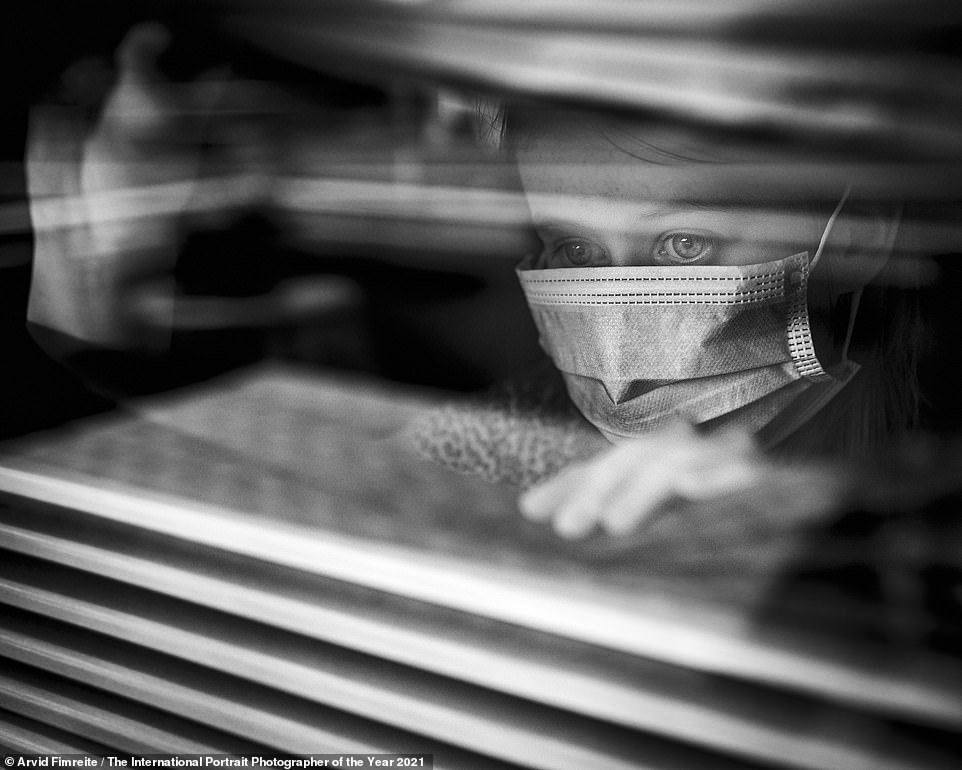 A poignant Top 101 Award entry by Norwegian photographer Arvid Fimreite, titled Terrified. The photographer said: ‘This is about Emily and all the other kids and teenagers who were terrified when the world shut down during the pandemic. Covid-19 hurts in many ways’ 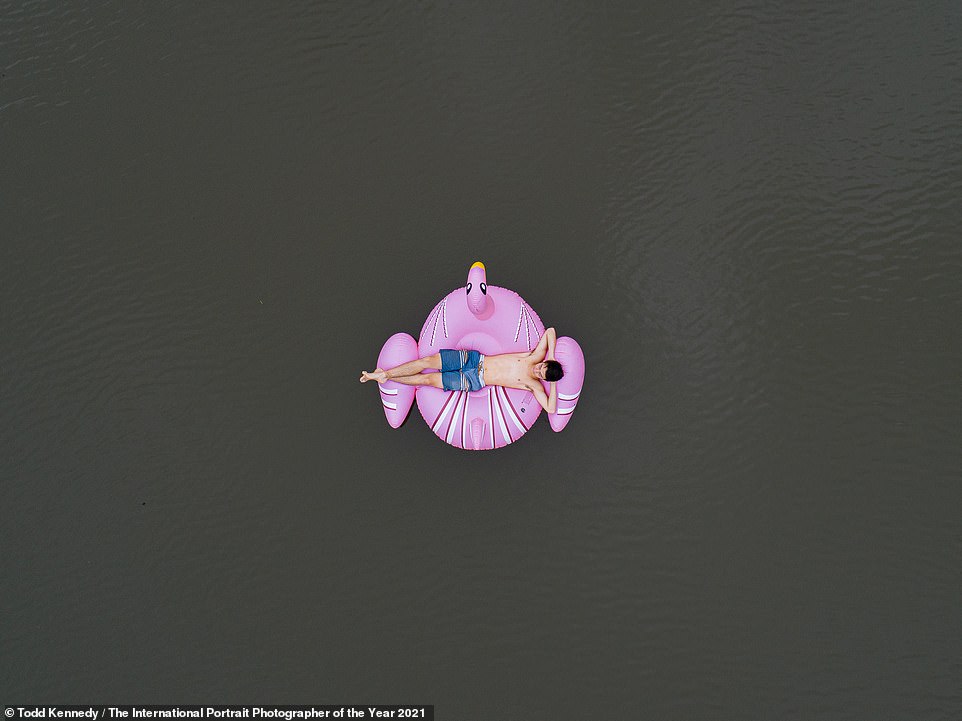 ‘Dirty with ash from the severe Australian bush fires of 2019/20, Max Kennedy enjoys a moment of silent reflection as he rides an inflatable flamingo down a river surrounded by a blackened landscape,’ said Australian photographer Todd Kennedy of this image, which is ranked Top 101 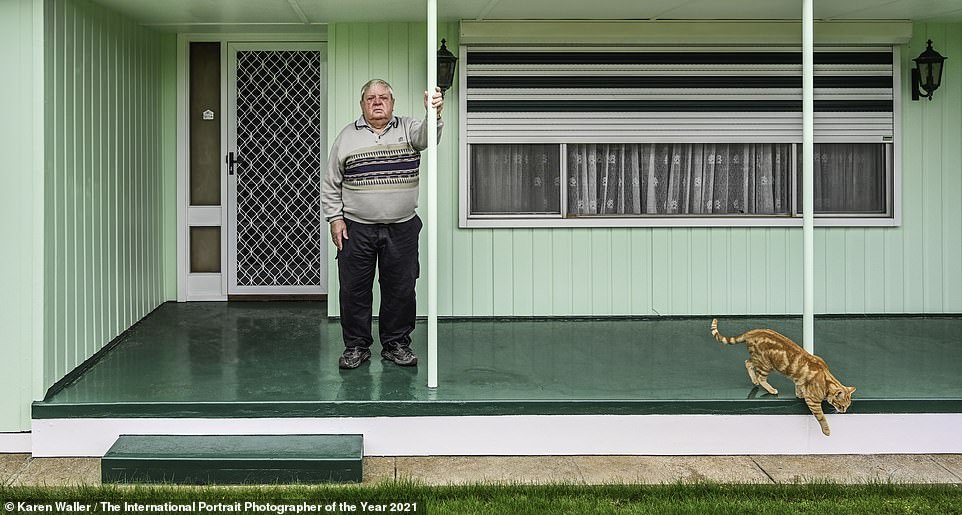 The runner-up prize in the Environmental Portrait category goes to this image of ‘Ern’ and a cat. The picture was taken by Australian photographer Karen Waller on the verandah of Ern’s home in Point Turton on Yorke Peninsula in South Australia

The overall winning photograph, taken by Forough Yavari. She’s a portrait and fine art photographer based in Brisbane, Australia, and takes home US$4,000 in prize money, $3,000 for being the overall winner and $1,000 for triumphing in the Portrait Story category