From a leaf-clad hotel in Singapore to the New York skyscraper with a sky bridge that houses a SWIMMING POOL: The world’s best tall buildings named

The world’s best tall buildings have been named and they include a leaf-clad skyscraper hotel in Singapore and a New York high rise with a sky bridge containing a swimming pool.

The Council On Tall Buildings And Urban Habitat (CTBUH) hands out awards to the high-rises that it believes are creatively designed and enhance the cities and the lives of their inhabitants.

Scroll down to see the stunning skyscrapers from around the world that have scooped gongs. 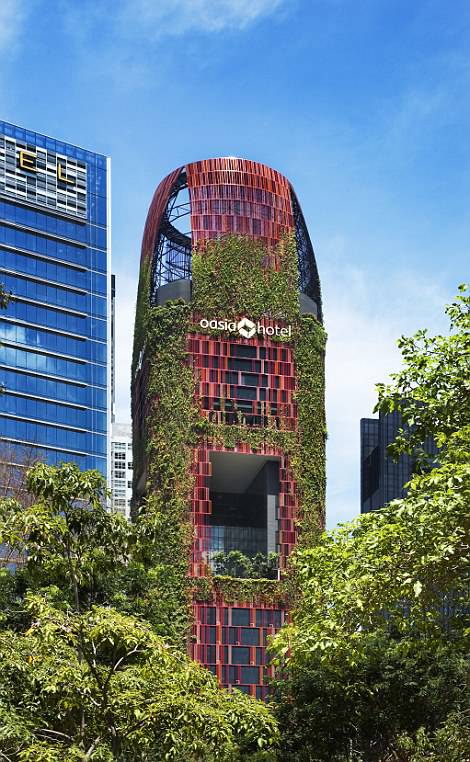 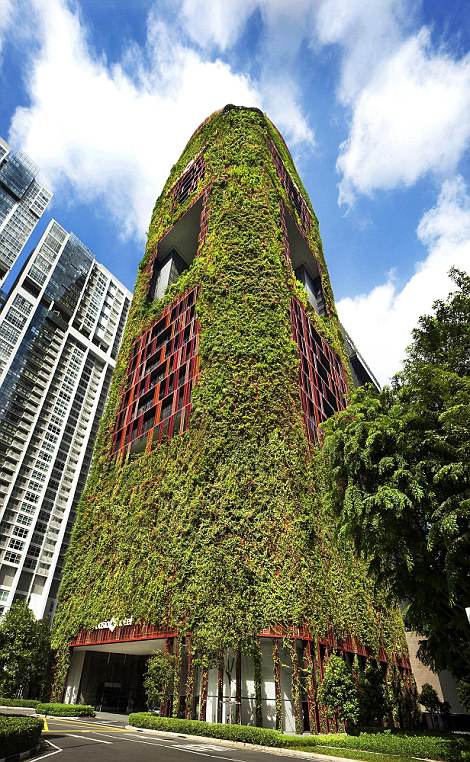 The visually-striking Oasia Hotel Downtown in Singapore, left. It stands out among the grey and blue high-rises of Singapore with its plant-covered façade, right 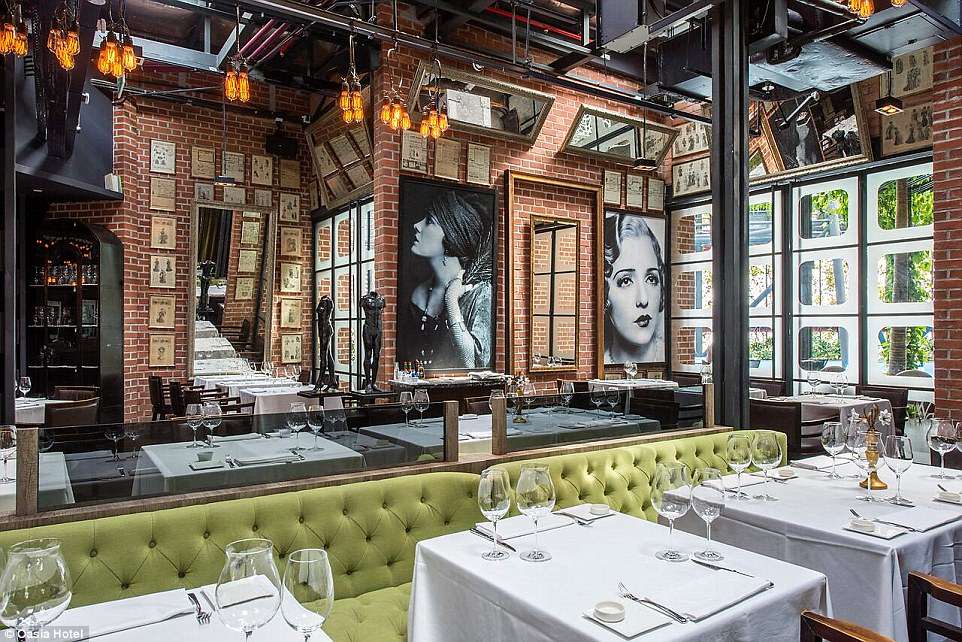 The OSO Ristorante, an Italian eatery located on the 27th floor of the Oasia Hotel Downtown, which has been named the best tall building in the world 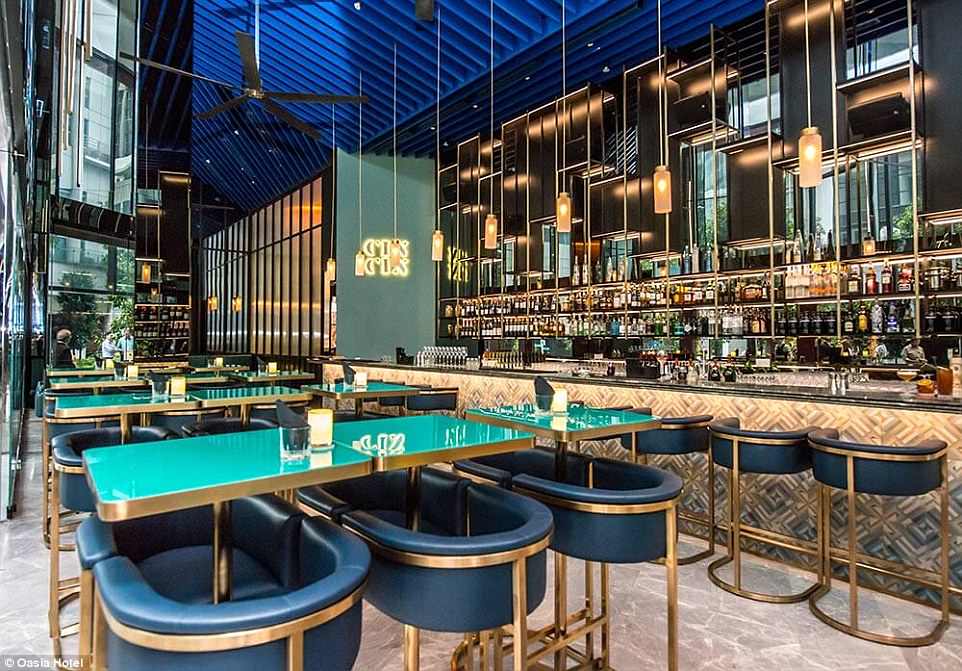 The Cin Cin bar, which is also inside the Oasia Hotel. It offers close to 100 different gins, sourced from around the globe 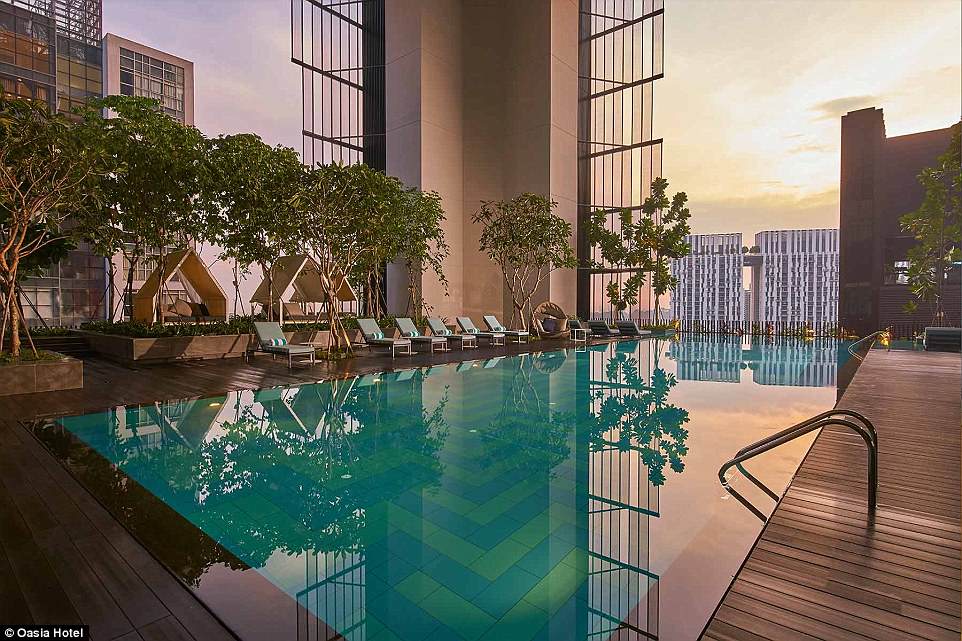 The stunning infinity pool that is housed in the Oasia Hotel Downtown in Singapore. The pool is reserved for club guests only

The visually-striking Oasia Hotel Downtown stands out among the grey and blue high-rises of Singapore with its plant-covered façade of red and green.

Landscaping is used extensively on the exterior of the buildings, with a total of 54 species of plants climbing along the aluminium mesh façade screen.

The judges praised the building for providing a ‘substantial commitment to outdoor communal space through the incorporation of skyspaces along its height, the tower provides respite and relief to its occupants, neighbours, and city’. 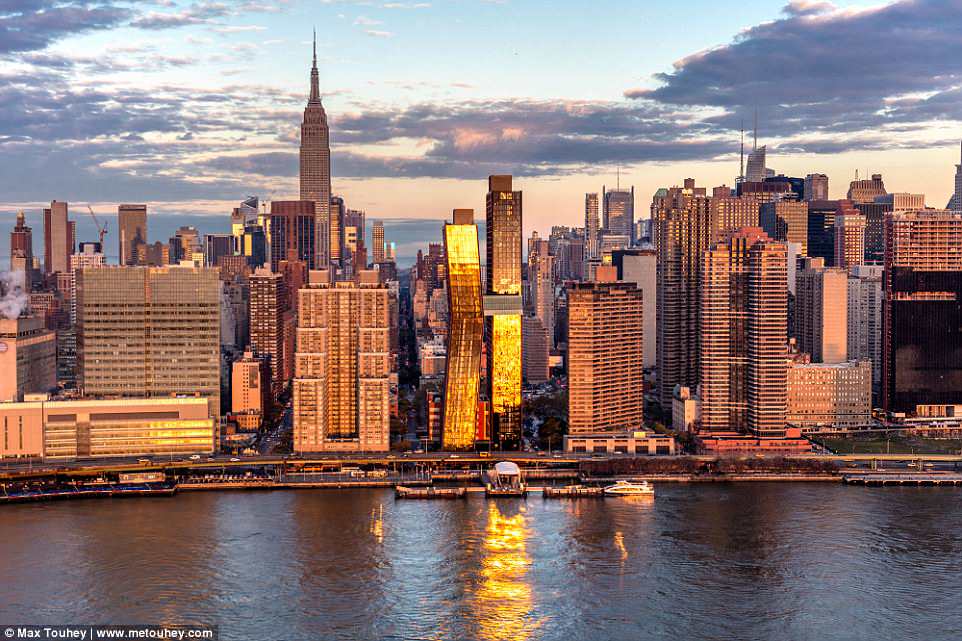 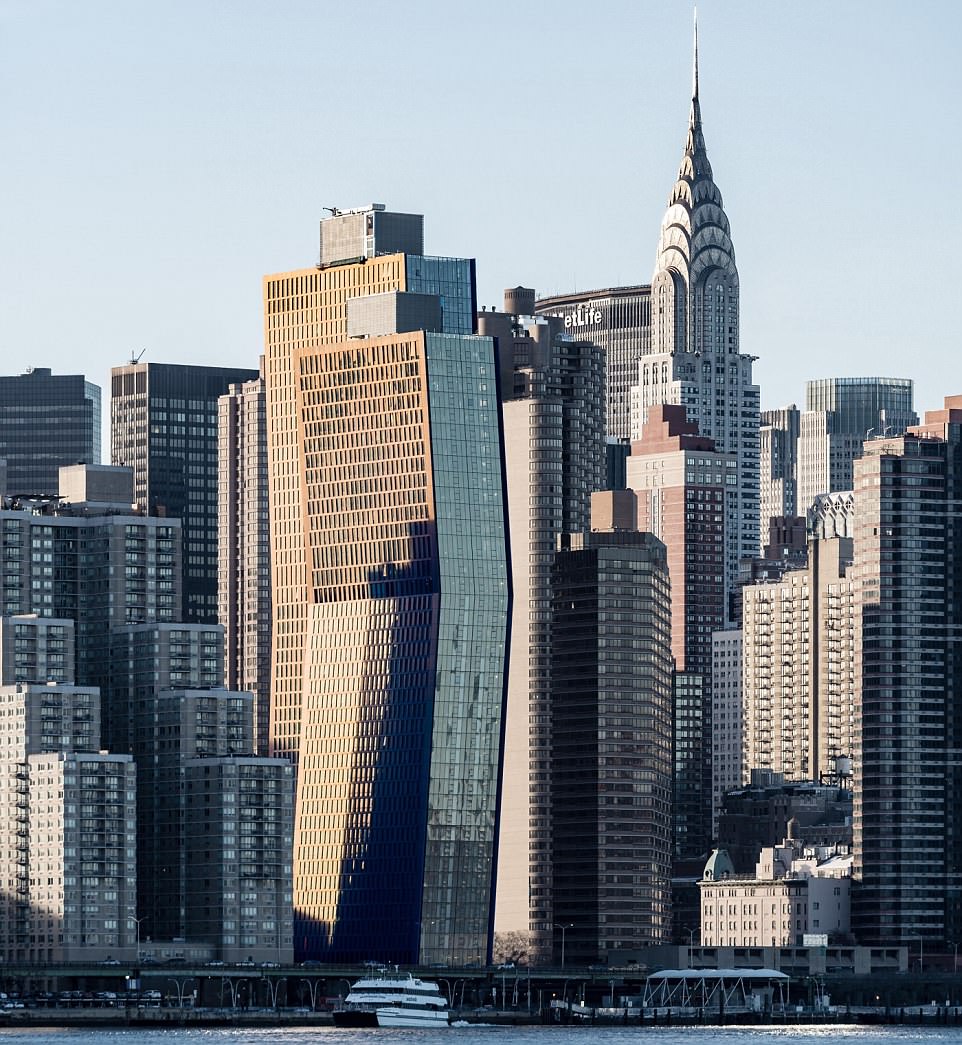 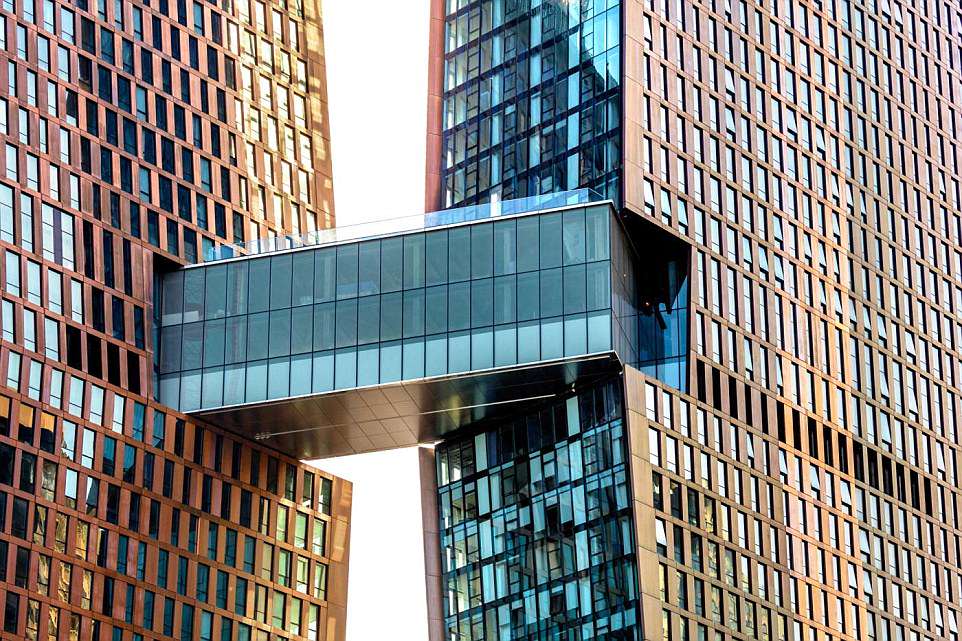 One of the stand out features of the buildings is the three-story skybridge, which connects the East and West towers 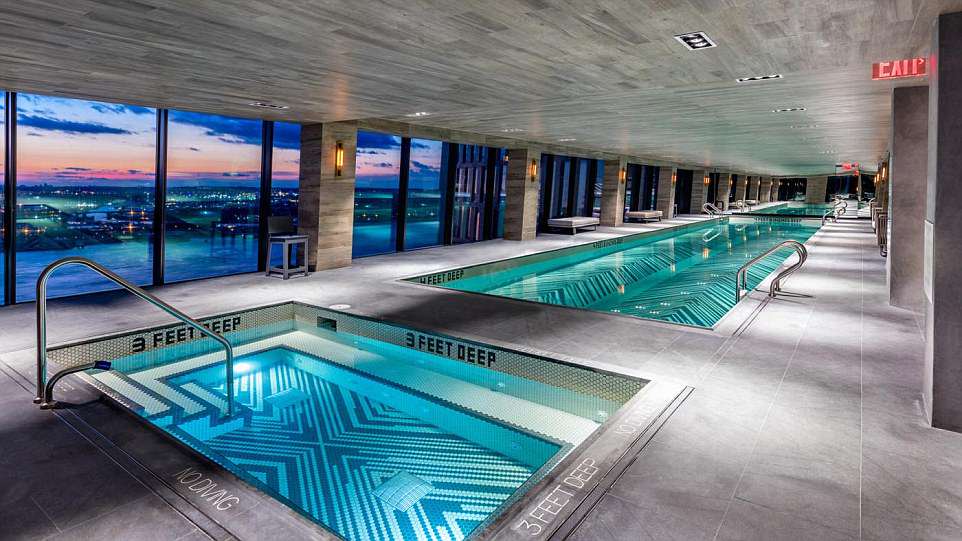 Inside the skybridge is a large swimming pool, which allows people to swim 300-feet in the air with views of the East River

Standing on the banks of New York City’s East River, the American Copper Buildings have been named the best tall buildings in the Americas.

The facade is clad in copper on the north and south facing exterior walls that will eventually turn blue-green like the iconic Statue of Liberty in later years.

However, the stand-out feature of the skyscraper is the three-story skybridge, which connects the East and West towers. It includes a pool that allows people to swim 300-feet in the air. 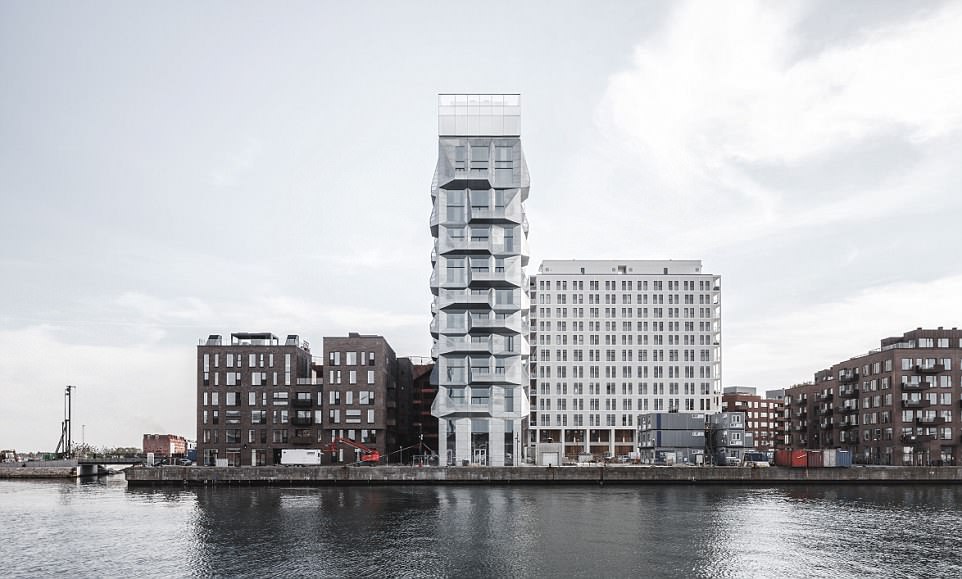 The Silo in the Nordhavn area of Copenhagen, which has been named the best tall building in Europe by the annual awards

The Silo has been transformed from a grain container in the formerly industrial Nordhavn area of Copenhagen into a contemporary residential high-rise.

The interior has been preserved as much as possible, while a façade made of galvanized steel has been installed on the exterior to create a climate shield.

The architects say the Silo embodies the importance of restoring original structures in cities, as a matter of environmental sustainability, as well as an ethical and visionary approach to cultural heritage. 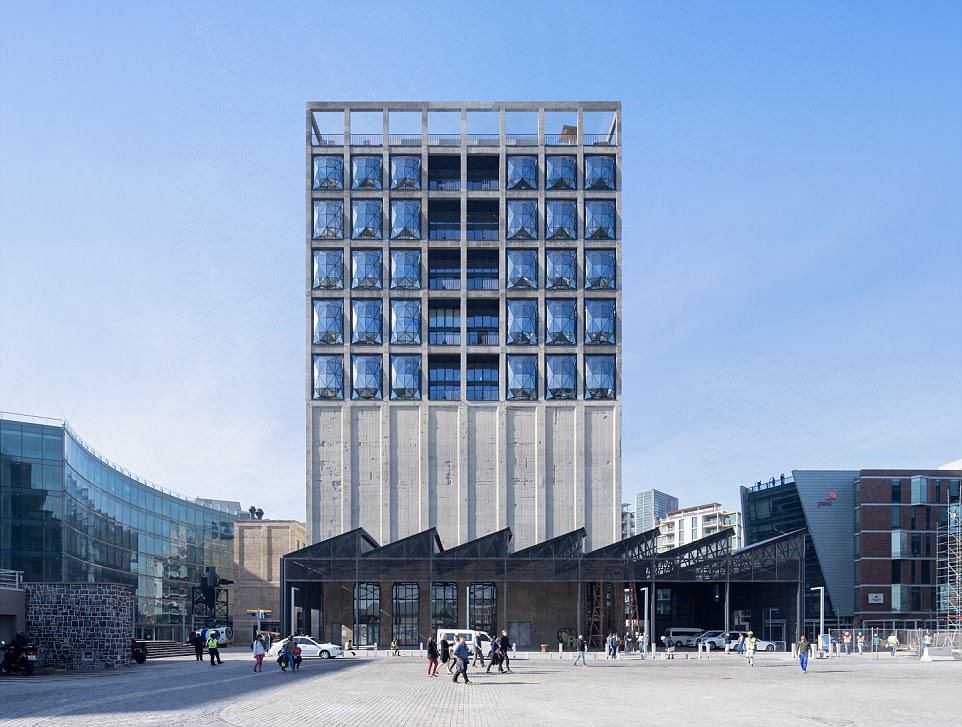 Located on the downtown waterfront of Cape Town, South Africa, the Zeitz MOCAA, which was formerly a grain storage, was named best tall building in Africa and the Middle East

Zeitz MOCAA building is a former grain storage and silo complex on the downtown waterfront of Cape Town, South Africa.

The top portion of the taller building was transformed into a luxury hotel, while the bottom section of the elevator building and the storage annex is Africa’s first international museum dedicated to contemporary African art.

From the outside, the greatest visible change to the original structure is the addition of glass windows, which by night transform the building into a glowing beacon on Table Bay. 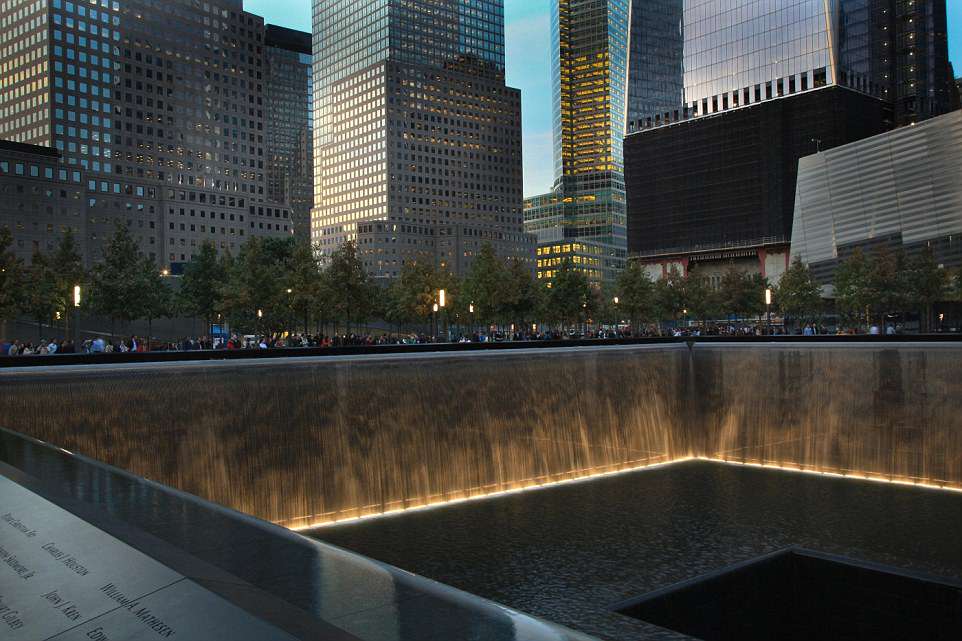 The World Trade Center Master Plan in New York City forms a welcoming and open space that is meant to foster the democratic values of public assembly that played a pivotal role in the city’s collective response to the attacks of September 11, 2001.

At the centre of the space are two reflecting pools that deeply puncture the vast flat expanse of the plaza, forming empty vessels that delineate the location of the former towers.

Judges were impressed saying ‘the design knits the site back into the urban fabric, allowing the site to be a living part of the city once again’. 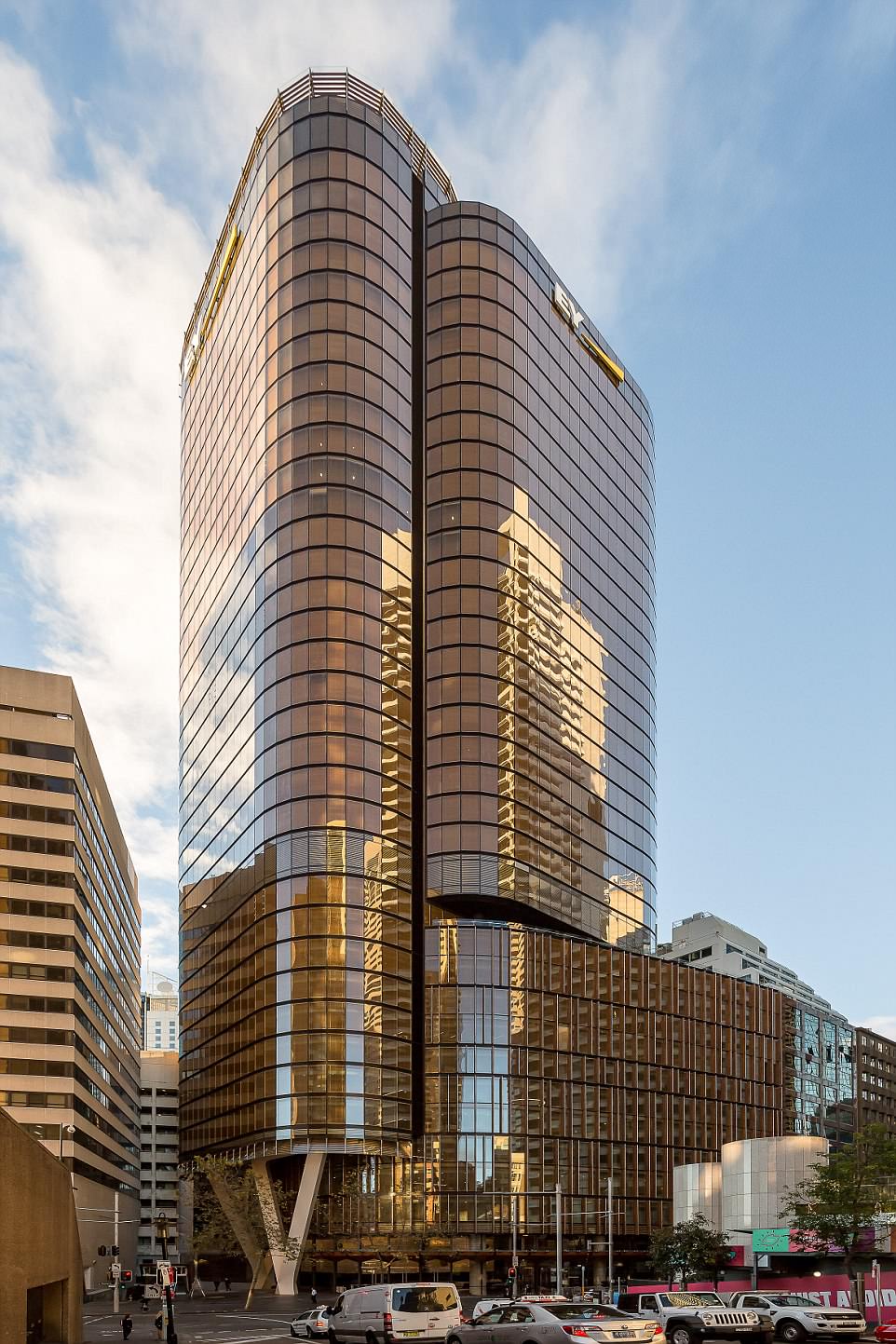 This is made possible by innovation in digital technologies that helps the building achieve impressive sustainability standards while creating an approachable office space for tenants, CTBUH said. Attention to detail was critical in the project’s delivery, it added.

A team used a 3D modeling platform to create an exact replica of the triangular timber soffit and awning, which could be meshed with as-built survey information to allow for prefabrication and high quality pre-assembly directly from the 3D models, the judges said. 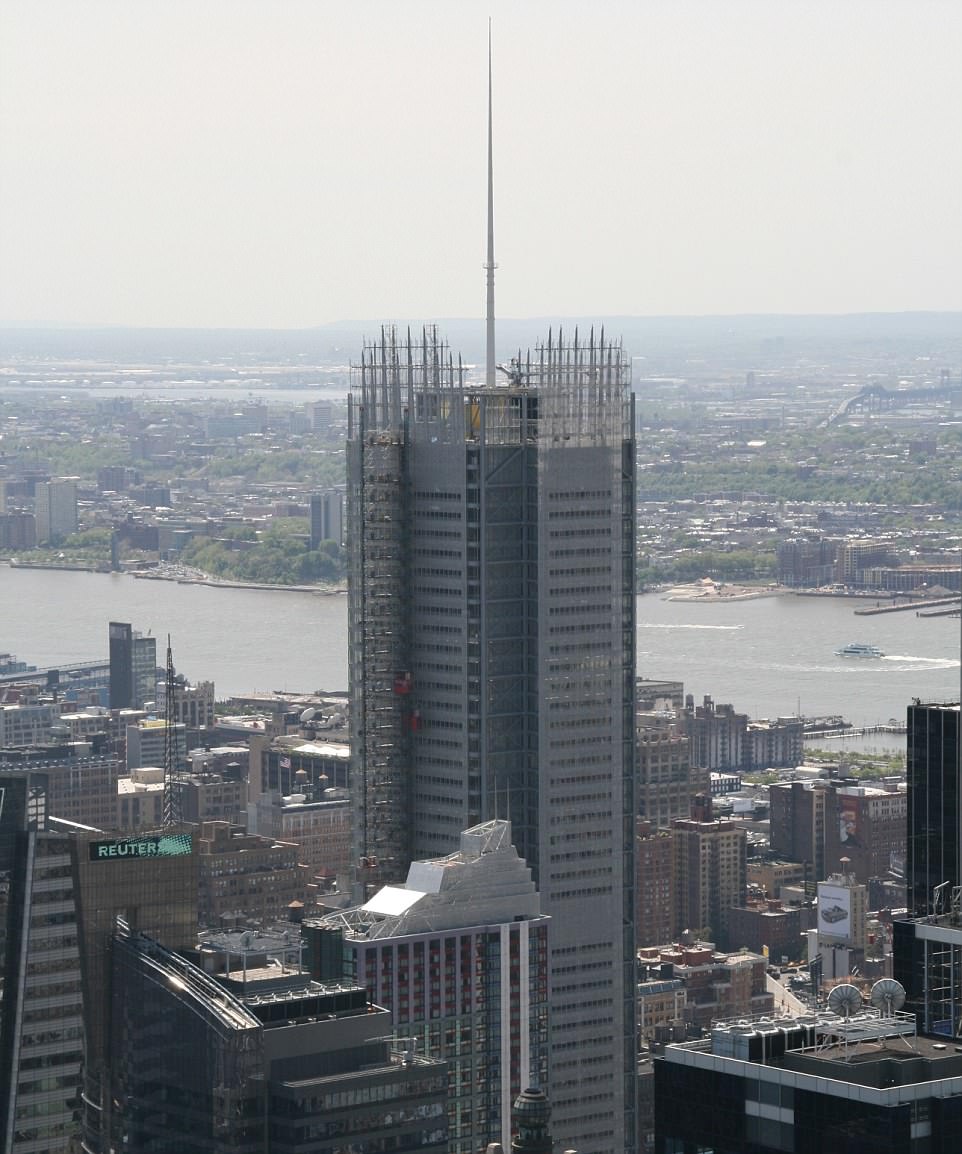 Winning the 2007 Completions award is the New York Times Building in Manhattan, pictured, which judges said stands out in the busy skyline thanks to a distinctive grille of white ceramic brises-rods wrapping around the structure

The awards also recognise tall buildings that are still impressive, long after being completed.

Wininng the 2007 Completions award is the New York Times Building in Manhattan, which judges said stands out in the busy skyline thanks to a distinctive grille of white ceramic brises-rods wrapping around the structure.

These elements help the building achieve a high level of transparency while reducing the heat load to a point where the building is energy-efficient and yet has the great luxury of floor-to-ceiling, water-white glass.

The façade includes a first-of-its-kind shading system that automatically adjusts to block glare, and the lights dynamically adjust to dim or turn off if the natural light is sufficiently bright. 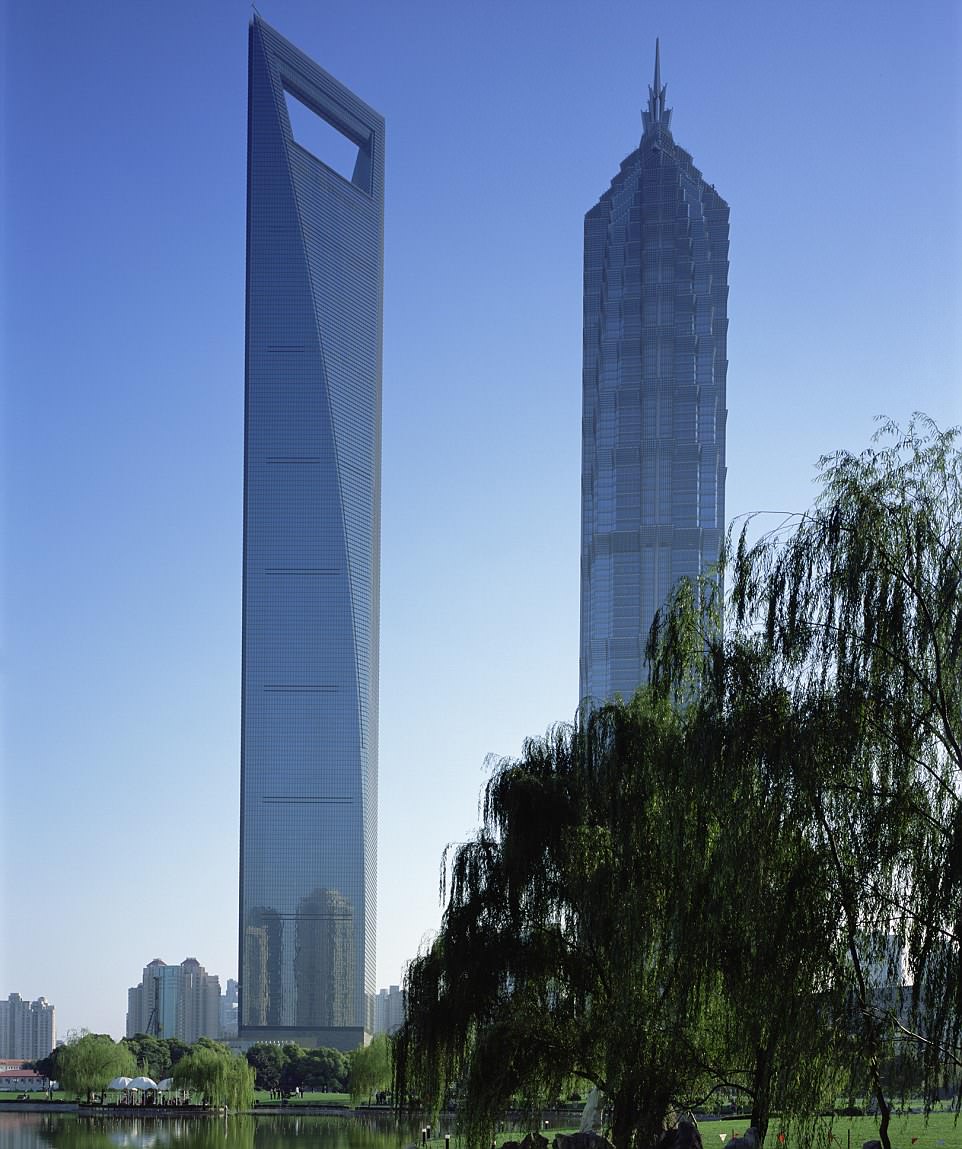 The Shanghai World Financial Center opened in 2008. It won an award for still impressing, ten years after it debuted

Shanghai World Financial Center is a symbol of commerce and culture as the city emerges as a global financial capital, CTBUH said.

The tower’s boldest feature, a 43-meter-wide portal carved through its upper levels, is dramatic, but also services a distinct structural function – it relieves the enormous wind pressures on the building, the judges added.

They continued: ‘This design boldness has allowed the SWFC to endure as an indelible feature of the city’s skyline 10 years later.’