A £100,000-A-YEAR boss of the rail union threatening 27 days of strikes over Christmas is facing an anti-Semitism probe.

Steve Hedley, the Rail, Maritime and Transport Union’s Senior Assistant General Secretary, told pals he is under investigation after a complaint about him was made to Labour. 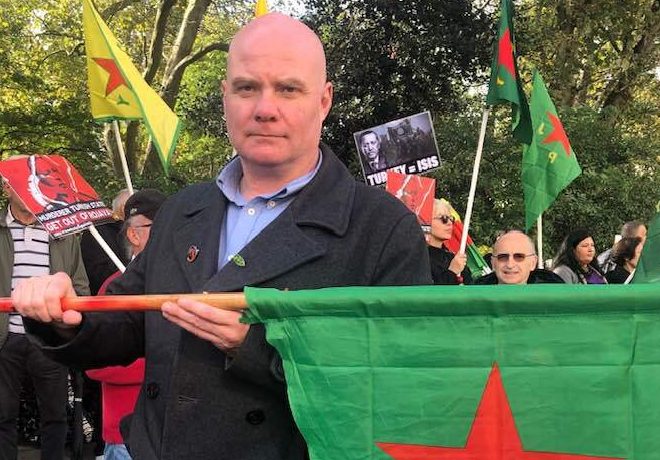 But despite the inquiry he is still free to lead the RMT’s controversial walkout over the role of guards on South Western Railway’s trains.

In an angry post on Facebook Mr Hedley, a close ally of disgraced anti-Semitism scandal candidate Chris Williamson, slammed the probe as “malicious and vexatious”.

He added: “The allegations have come on the back of me posting on Facebook about the oppression of Palestinians by the Israeli Government and ironically the attempts by supporters of the Israeli barbarity to silence those who speak out against atrocities. To remain silent in the face of injustice and slow genocide is to side with the oppressor.”

Nicki Jameson posted: “Are you even in the Labour party for the complaint to be made? I thought you joined to vote Corbyn in and then left again? Anyway Carol Foster and I will give you a reference, although we are completely the wrong sort of Jew.”

Liam O’Neill added: “It’s all BS. Israel dirty tricks. They throw mud and hope something sticks. People need to get that.”

Mr Hedley earns around £105,000 as one of three senior officials working alongside Rail and Maritime Union General Secretary Mick Cash.

Mr Hedley’s Twitter account profile boasts the slogan “No war but the class war!” and adds: “It’s either socialism or Barbarism baby!”

Earlier this year he posted photos of a family holiday to Rome on his publicly accessible Facebook account. Among them were pictures of Mr Hedley and his young daughter posing with clenched fists as they visited the grave of communist hero Antonio Gramsci.

Mr Hedley has also fiercely supported the right of Mr Williamson to return to the Labour party after he was booted out over goading the Jewish community over Labour’s anti-Semitism crisis.

Mr Williamson was on Wednesday banned by Labour’s NEC from standing again as a Labour MP.

In July Mr Hedley posted a picture of his office door bearing a poster with the slogan: “Reinstate Chris Williamson – stop the witch-hunt against Corbyn and his supporters”.

“Stop the witch hunt! Decent people will never be intimidated into silence over Israeli government barbarity because they know they will always be supported by real socialists.”

The strike will involve South Western Railway workers walking out for 27 days between December 2 and New Year’s Day.

Conductors will only return to work on election day and for Christmas Day and Boxing Day – when there are no trains running anyway.

South Western Railway carries nearly 600,000 passengers every day from Britain’s busiest railway station, London Waterloo, to regions including Sussex and Hampshire as well as down to Devon and Cornwall.

A mass walkout would likely lead to the cancellation of around half of timetabled journeys and widespread chaos across the network.

Hedley has hit the headlines in the past for previous controversies. He was seen sunning himself abroad in 2016 during the same week his members inflicted misery on thousands of passengers.

Pictures were posted on Facebook of him and another union official – Sean Hoyle – looking tanned and relaxed as the union’s members went on a planned five-day strike which saw hundreds of services cancelled.