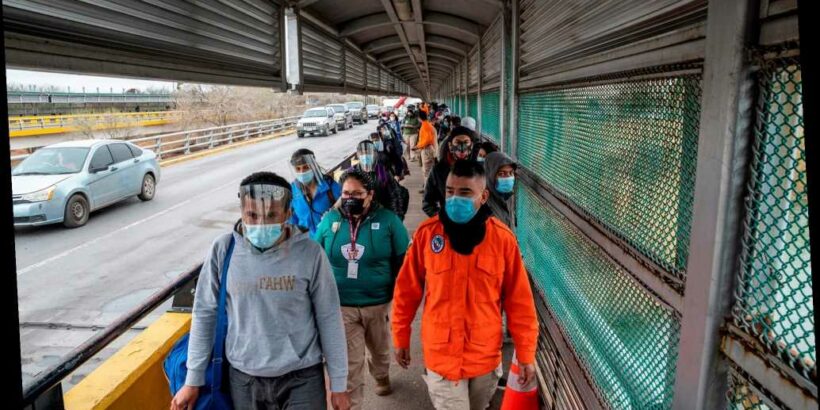 ​More than 100 illegal immigrants who tested positive for the coronavirus — after their arrival in Texas ​​since late January — have been released by the Border Patrol into the Lone Star State ​and are free to travel to other parts of the US, according to reports.

Felipe Romero, a spokesman for the border city of Brownsville, told Fox News that they are telling the migrants who tested positive to follow Centers for Disease Control and Prevention guidelines to quarantine and remain socially distance, but that Brownsville doesn’t have the authority to stop them from traveling to the rest of the country.

He said the 108 positives account for 6.3 percent of the total migrants who received rapid-tests at the city’s main bus terminal, a program that began on Jan. 25.

Some of the migrants described to Noticias Telemundo Investiga ​how they were tested at the border and then allowed to hit the streets despite a positive result for the coronavirus. ​​

Miriam Izaguirre, a migrant from Honduras, said she crossed the Rio Grande on Monday with her young son and surrendered to authorities but was released within a few hours by the Border Patrol.

“Right now we were tested for COVID and they separated us … because we were positive,” Izaguirre told news site. “We are waiting right now.”

​They expect to board a bus to Houston. ​​

Other migrants, who tested positive, said they plan to travel to North Carolina, Maryland and New Jersey.

​​Eva Orellana, a migrant from Honduras, said she and her 3-year-old daughter were going to ride the bus to North Carolina.

​​”On the way we were wearing a mask all the time, gel, washing our hands,” ​Orellana said. “Really, I don’t feel anything.”​

The immigrants said they didn’t receive any documentation that they had tested positive. They were simply informed that they had.​

Others said after the test they were directed to another waiting area than the others, but their movements were not restricted. ​

A Border Patrol spokesperson told the newspaper that migrants receive an initial inspection for symptoms but that only people with suspected cases are sent to local health authorities for “proper testing, diagnosis and treatment.”

President Biden has been reversing many of former President Donald Trump’s immigration policies since entering the White House, and US Customs and Border Protection said in a report last month that the border is experiencing a surge of migrants.

CBP also said it was sending additional agents to the border in response to the mounting crisis.  ​

But speaking at a White House briefing on Monday, Homeland Security Secretary Alejandro Mayorkas denied a crisis existed on the border.

“The men and women of the Department of Homeland Security are working around the clock, seven days a week to ensure that we do not have a crisis at the border, that we manage the challenge as acute as the challenge is,” he told reporters.