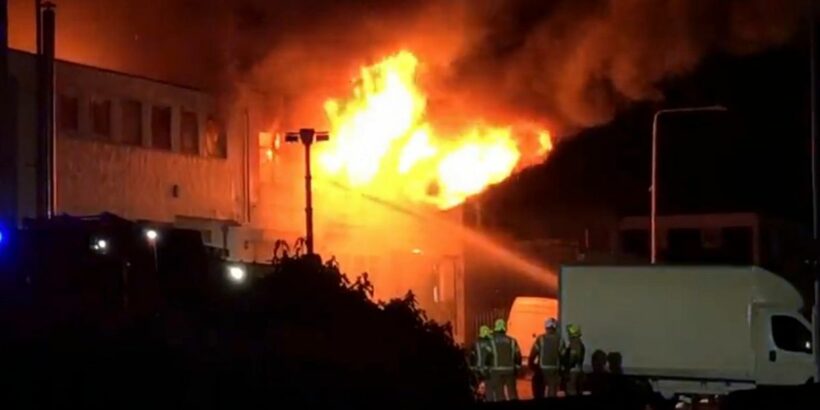 A major blaze in is being tackled by 125 firefighters with three two-storey warehouses going up in flames.

The fire started just after 9pm last night in ilford, East London, with the cause not yet known, reports The Mirror.

Crews from Ilford, Dagenham, Romford, Woodford and other surrounding stations all converged on the scene with people posting video footage and photographs of the fire on social media platforms.

Residents, meanwhile, have been instructed by the emergency services to keep their windows and doors shut until the blaze is under control.

London Fire Brigade tweeted: "Twenty fire engines and around 125 firefighters are at the scene of a fire on Fowler Road in #Ilford.

"Firefighters are tackling blaze where a range of warehouses are alight. More information to follow." A Fire Brigade statement added: "Firefighters are tackling a fire where three two-storey warehouses are alight. The Brigade was called at 21:07.

"Fire crews from Romford, Dagenham, Ilford, Woodford and other fire stations in the surrounding area are at the scene. The cause of the fire is not known at this stage."

Redbridge Police have said that Romford Road, New North Road and Fowler Road have all been closed. It tweeted: "We are assisting our colleagues from @LondonFire as they respond to a large fire in Fowler Road, Ilford.

"Local residents are urged to avoid the area & keep their windows closed. Due to the smoke road closures are in place including on Romford Road, New North Road and Fowler Road."

Meanwhile, Ilford North MP Wes Streeting has tweeted his thanks to the London Fire Brigade for its efforts in tackling the blaze.

He wrote: "Huge thanks to the London Fire Brigade for their response to the fire on the Hainault industrial estate. I hope that no one is hurt and that everyone is safe."