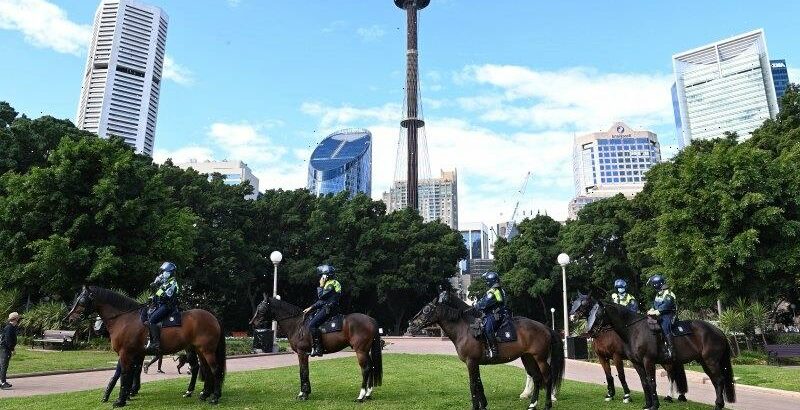 More than 1400 police will be deployed to disrupt a planned anti-lockdown protest in central Sydney on Saturday and are monitoring various schemes being promoted by organisers to help people subvert the major law enforcement operation and travel to the event.

Police have warned units will be stationed across Sydney’s road and transport network to intercept people en route to the CBD and surrounds, where a large contingent of officers will be waiting to issue heavy fines and arrest people breaching public health orders. 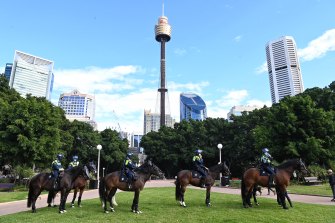 Mounted police in Sydney on July 31. Police are preparing to disrupt an anti-lockdown protest planned for Saturday. Credit:Nick Moir

The midday protest is being planned in Sydney as part of a “nationwide rally for freedom, peace and human rights”, also involving gatherings in Adelaide, Brisbane, Darwin, Melbourne, Perth, Cairns and Townsville.

As with a major protest that attracted thousands of attendees in late July, the Saturday event has been planned in online groups where key activists promote conspiracy theories about the COVID-19 pandemic and vaccines.

The NSW government’s introduction of increasingly strict public health orders as case numbers continue to grow could also motivate attendance by mainstream people objecting to the restrictions on business and other activity, especially in south-west Sydney.

In one group with around 2500 members on encrypted app Telegram, organisers have been sharing a range of techniques designed to thwart and evade police as they seek to intercept people going to the protest.

“The police will clamp down harder this time, but that is fine because we will still heavily outnumber them and have many brave warriors on our side ready to stand up and Fight for Freedom,” one admin said in a Thursday evening post.

In the online groups, some activists are sharing rudimentary legal documents they believe call into question the legitimacy of public health orders and the authority of police to enforce them.

Some have expressed sympathy for police and pointed to two open letters written by sworn officers to Commissioner Mick Fuller last year that attacked public health order enforcement. The letters were promoted by a fringe campaign called “Cops for COVID Truth”.

Attendees have been urged to have “clear and respectful” signs, bring friends, stay non-violent and capture footage of the event. 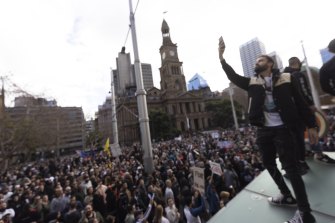 NSW Police Deputy Commissioner Mal Lanyon said officers were aware of the evasion tactics being discussed by activists and had strategies in place to respond.

“We have been monitoring a lot of information which is obviously about the potential tactics of those involved tomorrow. And we have put plans in place to actually adjust to that,” he said.

Police have issued 350 fines and charged 60 people who attended the major CBD protest in July. Police Minister David Elliott said officers were ready to impose the same penalties on Saturday and urged people to instead express their views online and to media outlets.

“Anybody who attends the protest tomorrow is going to be facing the full force of the NSW Police Force. You’ll also be endangering the lives of your loved ones and of course prolonging this lockdown,” Mr Elliott said.

He warned the gathering risked fuelling transmission of COVID-19 between people from different areas of the city.

”If you’re in a non-hotspot LGA, the last thing you want is people coming to this rally tomorrow and taking back to your LGA the same level of infection that we’ve got tragically in the 12 that are considered hotspots right now,” he said.

Police have issued a number of public safety orders against key “agitators”, restricting their ability to participate in the protest on Saturday.

Officers will be drawn from the ranks of local police stations around Sydney, the public order and riot squad, the dog and mounted unit, traffic and highway patrol, transport command and PolAir.

Police also warned they were aware of plans for “splinter events” in regional NSW and would respond to any gatherings.

On Friday, a 29-year-old Victorian man was sentenced in Hornsby Local Court to a maximum of eight months in prison for a series of offences, including travel from Queensland to Sydney in breach of public health orders.

The man, who police said was involved in unauthorised protest planning, pleaded guilty to four counts of not complying with public health orders, encouraging the commission of crimes and false representation resulting in police investigation.