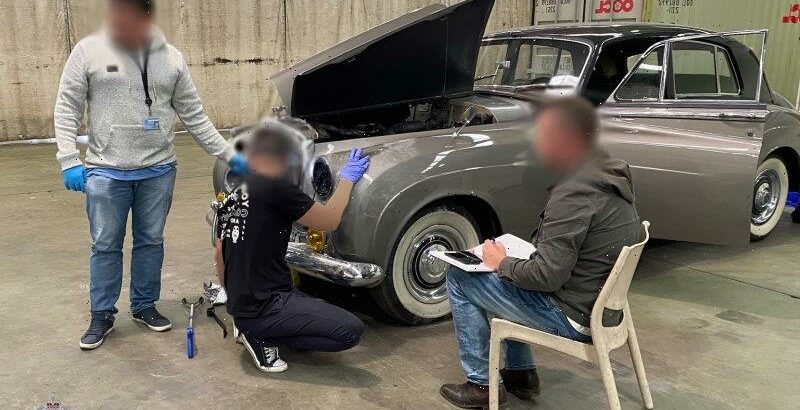 Three men have been charged after more than $150 million worth of cocaine and meth was found inside a vintage Bentley by Australian Border Force officers earlier this month.

The car arrived from Canada by sea cargo into Port Botany and was found to have illicit drugs concealed behind the headlights after being X-rayed.

The 1960 Bentley S2 was partially dismantled by police who located a total of 161 kilograms of methylamphetamine and 30 kilograms of cocaine.

Following an investigation into the importation, detectives executed a search warrant at Rooty Hill on Thursday afternoon. Two men, aged 20 and 23, were arrested and charged with various drug offences as a result.

A 25-year-old man was also charged in Ballina on Thursday over his alleged involvement in the crime. Police arrested the man following a vehicle stop where officers allegedly seized a further 2.2kg of methylamphetamine and more than $1.1 million in cash.

All three men were refused bail and will face court on Friday.

Police will address the public about the alleged crime on Friday morning.

In July, police intercepted multiple containers that had arrived in Port Botany. The shipments were found to be carrying 748kg of illicit drugs inside the stone.

With the investigation now totalling more than 1800 kilograms of meth, the bust marks the largest detection of the drug at the Australian border. The amount has an estimated street value of more than $1.6 billion.