Eighteen people have been shot dead and hundreds wounded in one of the deadliest attacks on Iraqi anti-government protesters since demonstrations began this month.

Masked gunmen opened fire last night in the Shiite holy city of Karbala after protesters took to the streets for a fifth consecutive day, demonstrating against lack of services and other grievances.

It was not immediately clear who was behind the attack, and protesters said they did not know whether the masked men were riot police, special forces or Iran-linked militias.

The bloodshed in Karbala, a major pilgrimage site where a revered Shiite figure was killed in a 7th century battle, could mark a turning point in the demonstrations. 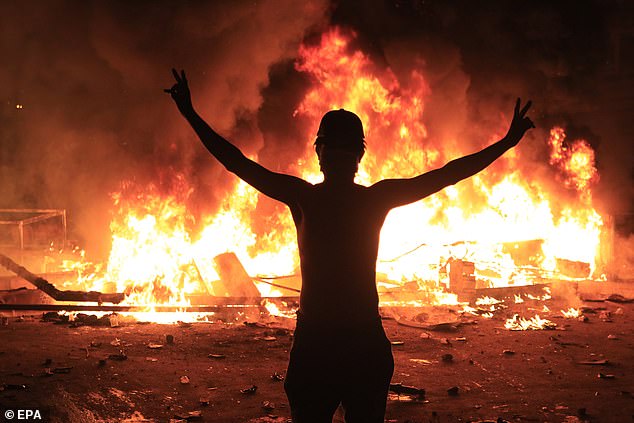 An Iraqi protester flashes the v-sign during a protest in Karbala on Monday night, masked gunmen opened fire killing 18 demonstrators 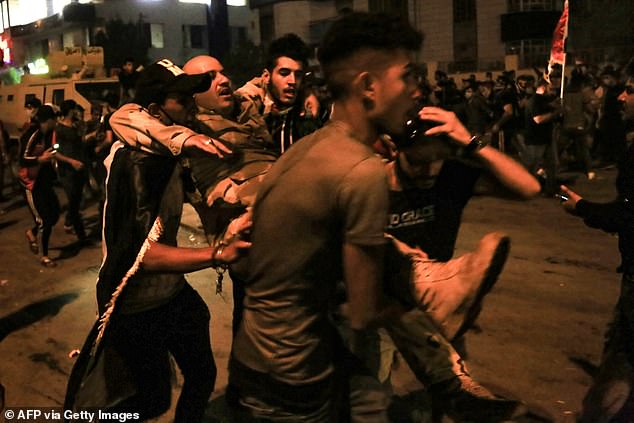 An Iraqi soldier is carried away by demonstrators during anti-government protests in the Shiite shrine city of Karbala, south of Iraq’s capital Baghdad last night 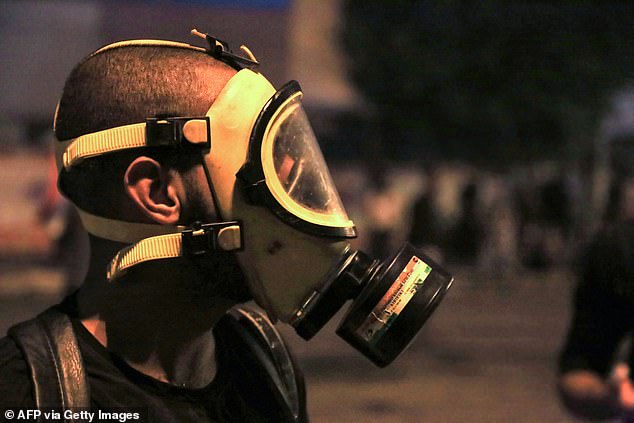 The protesters said Iraqi soldiers had been stationed around the protest site but withdrew after the attackers began firing tear gas and live bullets.

The provincial governor, Nassif al-Khutabi, denied that any protesters were killed, adding there were some injuries among security forces.

The protests across Iraq, leaderless and largely spontaneous, have been met with bullets and tear gas by security forces from the first day.

At least 73 protesters – not including the latest fatalities in Karbala – have been killed since anti-government demonstrations resumed on Friday, after 149 were killed during an earlier wave of protests this month.

Security officials said Tuesday’s attack happened in Karbala’s Education Square, about a mile from the Imam Hussein Shrine, where protesters had set up tents for their sit-in. 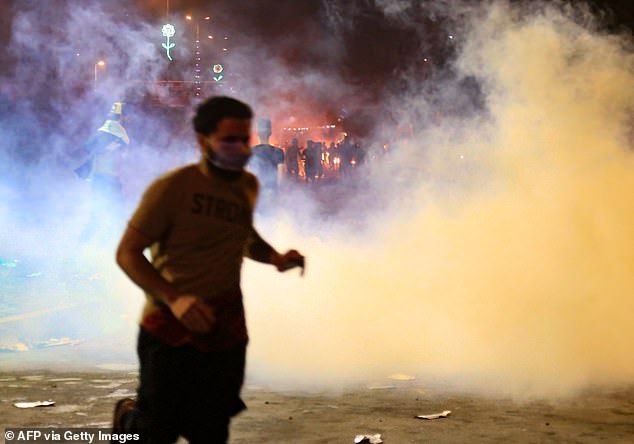 A witness said hundreds of protesters were in the encampment when live bullets were fired towards them from a passing car. Then masked gunmen in black plain clothes arrived and started shooting at the protesters, the witness said.

Karbala, along with Baghdad and cities across southern Iraq, has been gripped by a wave of anti-government protests which have often turned violent, with security forces opening fire and protesters torching government buildings and headquarters of Iran-backed militias.

The demonstrations have erupted in Shiite-majority areas and have been directed at the Shiite-dominated government and Shiite political parties and militias, many of which are supported by neighbouring Iran. 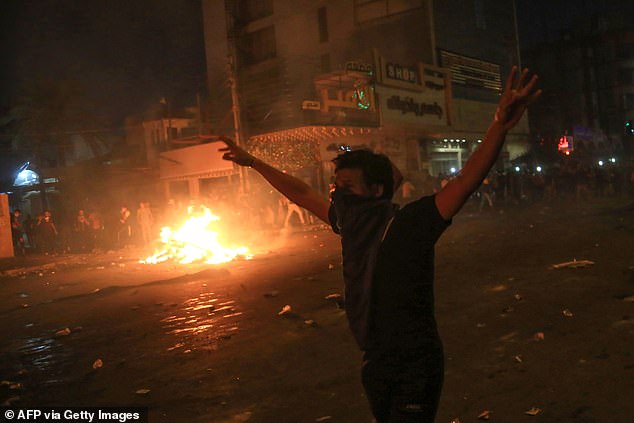 A protester gestures as burning tyres light up the night skies during anti-government protests in the Shiite shrine city of Karbala, south of Iraq’s capital Baghdad 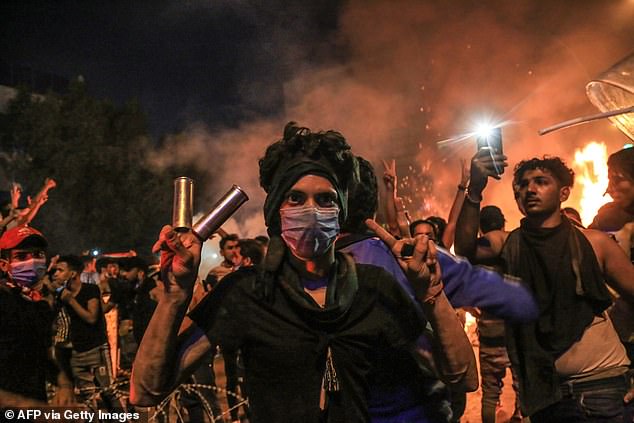 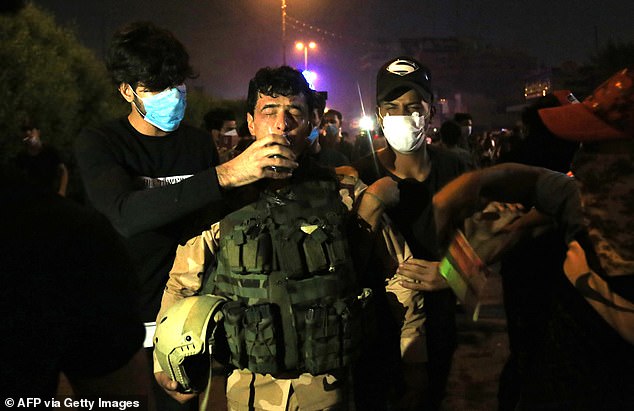 Karbala is one of the holiest places in Shiite Islam, where Hussein, the grandson of the Prophet Muhammad, was killed in battle in AD 680, a formative event in the schism between Shiite and Sunni Muslims. Hundreds of thousands of Shiites flock to the city every year to commemorate his martyrdom.

The overwhelming majority of the residents in Karbala and the city’s security forces are Shiite.

The demonstrations are fuelled by anger at corruption, economic stagnation and poor public services.

Despite its vast oil wealth, Iraq suffers from high unemployment and crumbling infrastructure, with frequent power outages that force many to rely on private generators.

The protests have grown and demonstrators are calling for sweeping changes, not just the government’s resignation. Prime minister Adel Abdel-Mahdi has promised a government reshuffle and a reform package, which the demonstrators have already rejected. 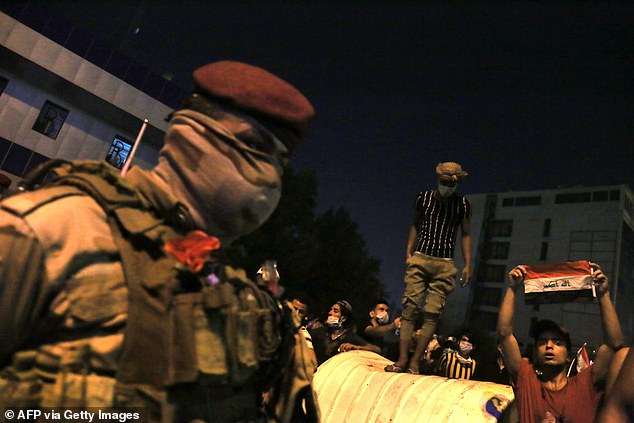 Authorities on Monday announced a curfew from midnight to 6am in Baghdad, as renewed protests there and across the south raged. A senior security official estimated that 25,000 protesters took part in the demonstration in the capital.

Students skipped classes at several universities and secondary schools in Baghdad and across Iraq’s majority-Shiite south on Monday to take part in the protests, despite the government ordering schools and universities to operate normally.