Rutting season typically doesn’t start until October, but these deer have already been flirting – with danger.

Police in Parma, Ohio, rescued two fawns from a backyard swimming pool where they’d fallen and become trapped for more than an hour on Sunday.

The homeowner had been unable to get the young deer out of the in-ground pool on her own, police said. Body camera video the police department shared on Facebook shows how officers were able to wrangle the animals using nets and pull them from the water.

The deer then ran off.

“The deer were tired, but happy, as you can hear them let out a ‘cheer’ of appreciation after being rescued,” police wrote.

White-tailed deer are common in Ohio, according to the Ohio Department of Natural Resources. They can be found in wildlife areas, nature preserves, parks and suburban neighborhoods. The deer are found so frequently in the state that hunters in Ohio killed more than 184,000 of them during the last hunting season. 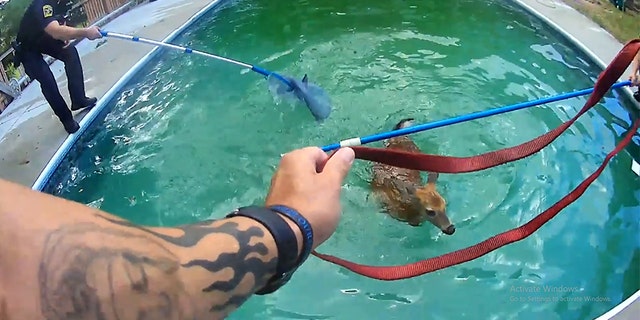 Body camera video the police department shared on Facebook shows how officers were able to wrangle the animals using nets and pull them from the water. (City of Parma PD)

Fawns are usually born between May and July after a mating period that starts in mid-October, according to state wildlife officials. A doe can give birth to two or three fawns per litter. The fawns will leave their mother after about 10-12 weeks.

Deer can actually swim, and there have been cases where they’ve been found to be strong enough swimmers that they have been moving against a strong river current or in the ocean near the coast. But the fawns that found themselves unable to get out of that pool Sunday would be just a few months old. 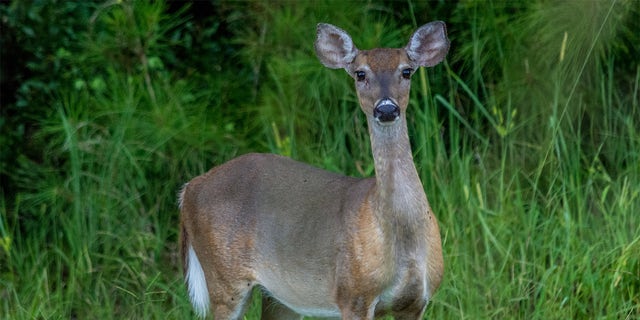 A doe can give birth to two or three fawns per litter. The fawns will leave their mother about 10-12 weeks. (iStock)

There are ways to deter wildlife from getting into a pool. Poolman, a swimming pool service company with offices in four states, recommends precautions like a fence or automatic sprinkler to keep animals away.

Utah State University has also suggested using a homemade repellent to keep wildlife away, such as a recipe with onion, jalapeno and cayenne pepper mixed in water and sprayed in areas near the pool.