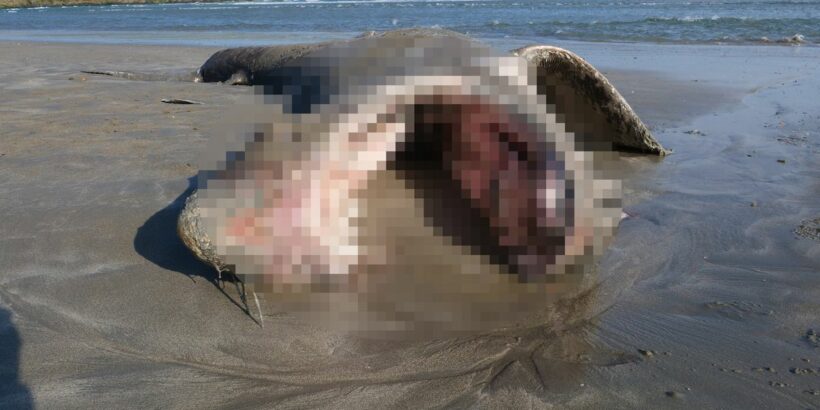 A shark carcass washed up on a British beach this weekend, leaving experts baffled as to how it died.

The seven-metre-long female basking shark was discovered on Inchydoney on Friday and could unlock secrets of the breed that are populating Irish waters.

Although, it's unknown how it died as there are no obvious indicators on its body.

Over the weekend, crews from the Irish Whale and Dolphin Group, Trinity College Dublin's Zoology Department, and Cork County Council arrived to dissect the animal for analysis, writes CorkBeo.

A marine biologist has said the find was 'bitter-sweet' after the fascinating breed was found dead.

Dr Nicholas Payne, also a lecturer at Trinity, said: “It’s sad of course to see such a big beautiful animal like that, but it’s good to try and get something positive out of it,” he said.

“We don’t really know how the shark died,” Dr Payne explained. “There was food in the stomach and it didn’t look like it had swallowed anything crazy.

"There was no evidence it had been torn up by a barge or anything like that.”

Dr Payne said the shark was approximately seven-and-a-half-metres long, but fully grown adults can be more than 10 metres in length.

It's believed the shark had not reached adulthood.

“It’s sad that it didn’t live longer, but incredibly fascinating at the same time. The specimen was fresh, it’s unusual to find one in such good condition – usually, you’ll get a rotting carcass that’s been dead for weeks

“It makes our work more comfortable for us, we can get way better information out of it and observe all the muscles and tissues. We get much better science out of it.”

The crews anticipated finding plastic in the stomach of the animal due to the large amounts of pollution in the waters, but there was no clear evidence this lead to the shark's death.

They have taken samples to the lab for advanced analysis but the shark carcass was buried on Saturday night by the council.

Basking sharks are often seen in southern Irish waters at this time of year for feeding before travelling north.

Dr Payne said the creatures are gentle giants and they feed similarly to whales and have tiny teeth.

He added there is "no real risk" of being bitten but people should be careful as they are "huge", and could get frightened if anybody is near.