Philadelphia: Vanessa Oppong thought about delaying her pursuit of a master’s degree in public health at Temple University in Philadelphia, given that classes were moved online this fall as a result of the pandemic.

Then, as the devastating effects of the coronavirus raged around her, she reconsidered.

A magnified coronavirus germ is displayed on a desktop computer monitor during coronavirus patient sample detection tests in Holland.Credit:Bloomberg

“I felt in a way called to continue my education,” Oppong, 23, of Woodbridge, Virginia, said. “There’s no better time than right now.”

And apparently she’s far from alone in her thinking.

Temple University saw a 120 per cent increase in first-year students enrolled in its master’s of public health program this year, from 69 to 152, with interest particularly high in epidemiology and behavioural sciences, said Laura A. Siminoff, dean of the College of Public Health. Applications and deposits are up for the spring semester and autumn is looking good, too, she said.

“The pandemic has really shown a spotlight on public health, what it is and why it’s important,” she said. “I’m so excited that young people are answering the call.”

Dr Thuan Ong, centre, reaches out to UW Medicine Chief Medical Officer Dr. Tim Dellit after Ong spoke with deep emotion about his patients before he received a COVID-19 vaccination at the hospital in Seattle. Credit:AP

It’s not just public health that’s seeing the spike. Temple and other area universities say interest in medical school, nursing and other health-related fields also are soaring. Applications are up by double digit percentages to medical schools, a rate of increase not seen in recent years.

And that mirrors a national trend. Applications at medical schools nationwide are up 18 per cent, compared to an increase of less than 3 per cent annually in the last decade, said Geoffrey Young, senior director for student affairs and programs at the Association of American Medical Colleges. Osteopathic medical schools also have reported larger numbers.

“In many ways, we think this increase is unprecedented,” Young said.

Entry to medical school has always been extremely competitive and the higher numbers mean it will be even more competitive this year.

Not all of the increase is because of the pandemic, officials say. In times of economic downturn, enrolments tend to rise as students who may have taken a few years off to work seek to continue their education instead. More students are applying to a larger number of schools. And numbers had been on the rise anyway, with a shortage of physicians projected by 2032.

But the fact that Anthony Fauci, the benevolent doctor who leads the National Institute of Allergy and Infectious Diseases, has become a household name and that everyone’s life has been altered by the coronavirus have certainly stoked interest.

“There is a sense of respect and in some cases newfound respect for health care workers, for scientists, for this idea that during a pandemic, when so many other aspects of life were unavailable or deemed nonessential, that the one source of inspiration was the role of health care workers, of doctors and nurses on the front lines helping people get through this frightening time,” said Neha Vapiwala, associate dean of admissions for the University of Pennsylvania’s Perelman School of Medicine and a professor of radiation oncology. 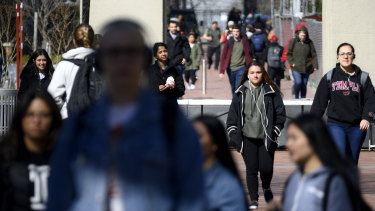 Temple University, in Philadelphia, PA, has seen a surge in interest in medical degrees. Credit:Getty

The University of Pennsylvania received 7303 applications to its medical school for about 150 spots, a 20 per cent jump.

Prospective students noted on applications the effect the pandemic had on their decision to apply, the University of Pennsylvania said. Some said they were inspired by frontline workers and wanted to make a difference. Some wrote that they were personally affected by COVID-19, suffering illness within the family or loss of someone close. Others said they wanted to do research to help prevent and combat disease. And some noted that other employment opportunities were not available or as appealing because of the pandemic.

Olivia Palmer had already applied to the University of Pennsylvania’s medical school when the pandemic hit. Palmer, of Cheshire, Connecticut, just completed her first semester this autumn.

But the coronavirus, she said, greatly affected her outlook on her career path. When it started, she was working at a nonprofit in Boston that helps those experiencing homelessness with health care and witnessed how people got the virus because they were crammed into under-resourced shelters without access to adequate care, she said.

”It really showed me that thinking about health equity needs to be a mainstay and centre point of my future career as a physician,” said Palmer, 23, who got her undergraduate degree at Boston College.

“What they can do is apply to medical school,” he said.

And many did. Temple is thousands of applications ahead of previous years, he said.

Applications to Drexel University’s medical school are up by 22 per cent said Niki Gianakaris, a spokesperson.

Students in high school may not have known what a career in public health meant before, she said. They do now.

Hannah McKinney, 22, saw that transformation firsthand. When she first declared public health as her undergraduate major at Temple a couple years ago, friends asked ‘"what are you even going to do with that," she recalled.

“Now everyone is like oh my gosh, it’s this high and mighty field and discipline,” she said. “It’s the centre of every conversation.”

McKinney, who got her bachelor’s in May, is pursuing her master’s in public health, also at Temple. She’s focusing on epidemiology, a decision influenced by the pandemic. She was in a research methods course last spring when her professor, a member of Temple’s coronavirus task force, gave students a firsthand look at what was happening.

“Her involvement made me think this is something I could do,” she said.

The pandemic also has caused universities to plan or make changes in curriculum and programs.

Drexel recently announced it was establishing a centre on racism and health to look at ways to eliminate disparities that unfairly affect health in communities of colour. The university also plans to start a new program in economics and public health, part of a larger effort to pair economics as a second major with other subjects. Public health probably would have been chosen anyway, said Mark Stehr, professor and director of Drexel’s school of economics.

“The pandemic certainly, I think, gave it a push,” he said.