i-Cradle makes my blood run cold: A cot with a built-in iPad? LIBBY PURVES says it’s a tragic sign of how LAZY parenting and digital addiction are stifling our children’s lives

Of all the baleful developments of the digital age, the latest is the most depressing.

It comes from a chap in Birmingham named Gary Taylor, who clearly knows a bit about marketing and technology — but, I would submit, damn all about babies.

He is producing ‘intelligent cots’. Not intelligent in the sense of having properly spaced bars, a flameproof mattress and hygienic padding, but because they have a built-in dock for an iPad. 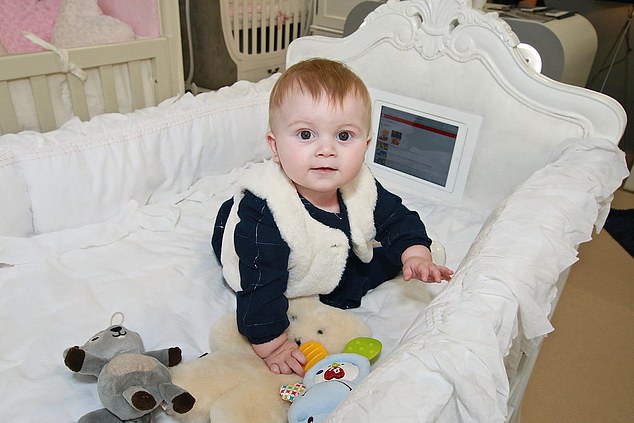 The idea came about after Mr Taylor wanted to use iPad apps to play ‘white noise’ to his nine-month-old daughter, Graysie, to help her sleep. But the idea grew to provide in-cot, swipeable entertainment next to the little one’s head at a cost of £2,000 per mahogany ‘Florence’ crib

The idea came about after Mr Taylor wanted to use iPad apps to play ‘white noise’ to his nine-month-old daughter, Graysie, to help her sleep.

But the idea grew to provide in-cot, swipeable entertainment right next to the little one’s head at a cost of £2,000 per mahogany ‘Florence’ crib.

Criticised for exposing infants so young to technology, Mr Taylor blustered: ‘People put their kids in front of the TV in the morning: is that safe?

In the cot it could be a lot safer. Kids are stuck on their computers. That’s the way the generation is going. I’m giving people what they want.’

Let’s unpick that. Propping a cot-age baby in front of the television for a long time is a bad idea, but at least there’s a chance that an adult will pass in and out to exchange an occasional word with the baby, or respond to gurgles and coos of interest at the coloured shapes and noises from the screen. 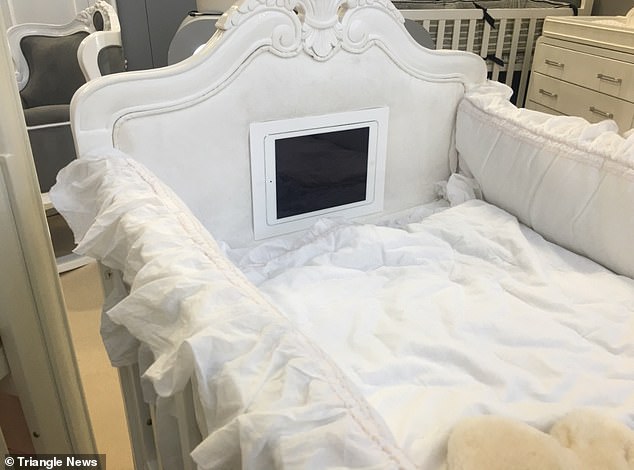 But the idea grew to provide in-cot, swipeable entertainment right next to the little one’s head at a cost of £2,000 per mahogany ‘Florence’ crib

That’s not the case with iPhones, iPads and tablets, which are already, for many parents, a useful substitute for childcare.

According to a survey by the website babies.co.uk, half of parents routinely allow their toddlers to play with their gadgets.

Hand one over and your child will disappear for hours into a solitary digital world that requires minimal adult input.

There are thousands of apps specifically for children, plus devices including an iPotty — a potty with a holder for a screen, and an iTeddy with a media player built into its chest. There’s even a name — an iPaddy — for the tantrums triggered when it’s time to put them away.

We know teenagers spend their lives glued to their phones, and even normally sane adults depend on checking them 80 times a day. But now it’s babies. Alone in a cot with a screen, they may quickly learn to swipe and change the pictures or tunes, but there will be no warm human voice. No touch, no connection with the world in a solid, animal way. 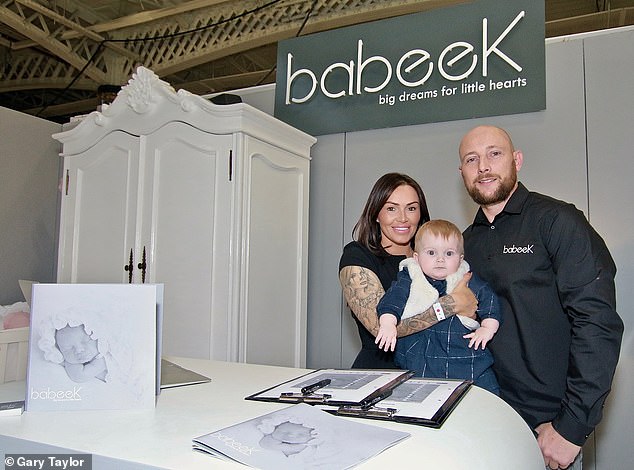 That’s not the case with iPhones, iPads and tablets, which are already, for many parents, a useful substitute for childcare. According to a survey by the website babies.co.uk, half of parents routinely allow their toddlers to play with their gadgets

It’s reminiscent of those science fiction stories where human bodies atrophy and nothing remains but a brain on a stick.

There is a real risk in this. Toddlers can indeed enjoy a bit of tablet time, within limits, and the gadgets are useful for those with physical or learning disabilities. I’ve seen how working with an iPad helped a young child with limited speech who had spent months isolated in hospital while on chemotherapy.

But that is the exception. A healthy baby, like any young creature, needs as much stimulation in the world as possible.

The more time an infant spends delving into Play-Doh, mud or sand; flicking through books; playing with paper, crayons and fingerpaints or waving around bits of rope, the better.

It is an education in science, aesthetics, even drama — shoving Teddy’s head in the sand and pulling him out again, or pushing a Duplo car off the table so the people fall out is the first bit of imaginative creativity.

But, say the digital zealots, isn’t a screen a window on the world? Sure, for a few minutes now and then. But there is a big difference between a picture of a duck and seeing a real one quacking along, tantalisingly almost within reach of your pushchair, or fighting with other ducks for the bits of bread you’ve hurled into the water.

And how can even the most exciting Thomas The Tank Engine video compete with the thrillingly noisy cranes and diggers at the building site on the way to the park?

This exposure to the sights, sounds and smells of the everyday is a vital part of development. We rightly expressed horror in the Nineties at the reports of Romanian babies confined to their cots all day in bleak orphanages with only perfunctory human contact. 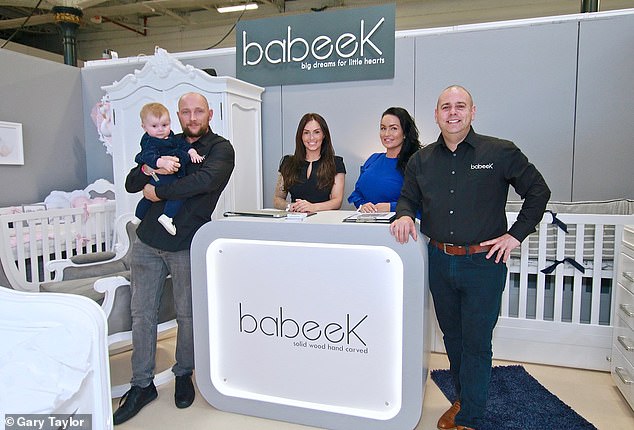 Mr Taylor the cot-man might accept that being stuck to a screen is ‘the way this generation is going’, but alarm bells are ringing on the far side of those teenage years

We know what difficulties these children experienced in coping with normal levels of mental stimulation and socialising with others as they grew up.

Mr Taylor the cot-man might accept that being stuck to a screen is ‘the way this generation is going’, but alarm bells are ringing on the far side of those teenage years.

Roger Kneebone, professor of surgical education at Imperial College London, warned last week that he was coming across medical students who had spent so much time in the swipe-a-screen world that they had no ‘tactile general knowledge’ and weren’t fit to cut and sew as surgeons must. (Imperial is actually hiring magicians to encourage students to make more sophisticated use of their fingers.)

There are darker worries, too. Professor Susan Greenfield and others who study the development of the brain have been warning for years about the consequences of addiction to screen games and digital social media.

The brain is shaped through life on a physical, cellular level.

‘When I say “shaped”, I’m not talking figuratively or metaphorically, I’m talking literally,’ Professor Greenfield explains. ‘At a micro-cellular level, the infinitely complex network of nerve cells that make up the constituent parts of the brain change in response to experiences and stimuli.’

All kinds of alarming changes are being noticed already. Attention spans of young and old are lowered by constant clicking and swiping; even adults notice how much more we focus after a few days off email, Twitter and the rest.

Professor Greenfield talks of young brains being ‘re-wired’ to meet the needs of this useless click-gratification, to deliver that hit of ‘feel-good’ chemicals in the brain that keep children hooked.

Other vital human abilities are lost, too. Adam Alter, author of Irresistible: The Rise Of Addictive Technology, quotes research showing that children who regularly use tablets or phones often lose the natural ability to decode expressions in people’s faces and bodies.

Nor is excessive screen time good for our eyes. A report from Toledo University found that the blue light from screens may increase the risk of the eye condition macular degeneration. It’s not an instant alarm call, but we are advised to avert our eyes from our screens every few minutes to focus on something in the distance.

As adults we can act on this, but how easy it will be for the colourful, moving images and tunes to hold a baby’s little eyes for too long.

Some aspects of life, of course, are enhanced by tech: we all learn from the internet, a cornucopia of facts and images in our pocket, unique in human history.

And it is true that video gamers develop a remarkably fast set of reflexes, but it is in a limited range of movement; just as that poor baby, alone in a cot, swiping at the screen on the iPad will get quite good at it — but at nothing else.

How many parents will be able to convince their children to pick up a book and discover the wonders of classic stories when they’re competing with such a digital box of delights?

And since adults are being begged by sleep experts not to take their phones or tablets into the bedroom for the sake of proper rest — blue light blocks release of the sleep hormone melatonin — what are we doing even contemplating settling a child down with one of the things?

How can we adults, who grew up without tech interfering in our lives, who are used to solid and social life and know when we need a break, belittle the risk to our children by acquainting them with a screen from their cradle? Less intelligent cot, more digital nanny. It is nothing short of horrifying.