A fossilized dinosaur egg from over 66 million years ago was found to have an embryo inside it of it, and international researchers say the discovery creates a link between dinosaurs and modern-day birds.

The fossilized dinosaur egg was found in 2000 in Ganzhou, Jiangxi Province in southern China by Yingliang Group, a company that mines stones. Company workers suspected they were likely dinosaur fossils, so they were put in storage.

It wasn't until the company began building the Yingliang Stone Nature History Museum in 2010 when museum staff were going through the storage and found the fossils, noticing bones within the egg. After scientists began to examine the fossils, they said one of the eggs contained an embryo, which they named "Baby Yingliang."

Their findings were published in the peer-reviewed journal iScience on Tuesday.

"Dinosaur embryos are some of the rarest fossils, and most of them are incomplete with the bones dislocated. We are very excited about the discovery of 'Baby Yingliang,'" Fion Waisum Ma, author of the study and researcher at the University of Birmingham in England, said in a statement. "It is preserved in a great condition and helps us answer a lot of questions about dinosaur growth and reproduction with it." 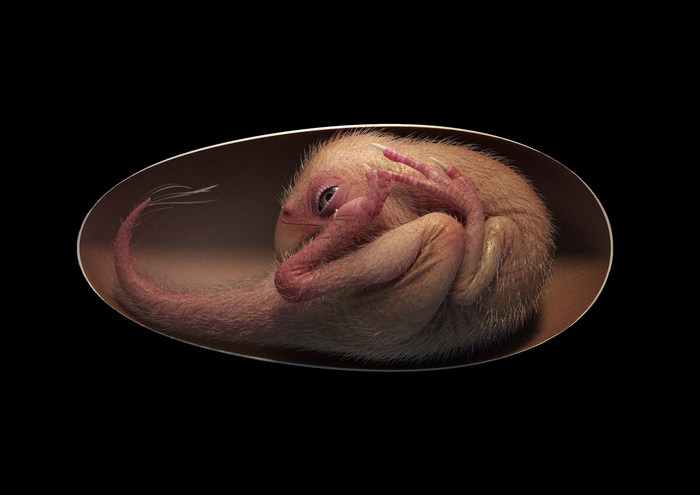 The dinosaur, an oviraptorosaurs, is closely related to birds and part of the therapod group. Therapods were carnivorous dinosaurs with small forelimbs that walked on two feet, like other creatures in that group such as the Tyrannosaurus rex and the velociraptor.

But a distinct feature scientists noticed about the embryo was it shared a very similar pose to birds before hatching, something thought to be unique in the animal kingdom.

With the oviraptorosaurs embryo, researchers say it was in a tucking position, with the feet on the side of its head and its back against the shell. Today, birds stay in the position before hatching and if they don't, they have a higher chance of dying before or at birth.

This dinosaur did not fly, making it the first time the tucking position had been observed in a non-avian animal. The findings suggest modern-bird hatching practices may have come from non-flying dinosaurs hundreds of millions of years ago. The embryo is estimated to be 66- to 72-million-years-old.

"It is interesting to see this dinosaur embryo and a chicken embryo pose in a similar way inside the egg, which possibly indicates similar prehatching behaviours," Waisum Ma said. "This posture had not been recognized in non-avian dinosaurs before."

The embryo will go under further evaluation in attempt to understand its anatomy and learn more about dinosaur embryos, as well as learn more of how dinosaurs and birds today are related.

"This dinosaur embryo inside its egg is one of the most beautiful fossils I have ever seen," said Steve Brusatte, co-author and palaeontologist from the University of Edinburgh in Scotland. "This little prenatal dinosaur looks just like a baby bird curled in its egg, which is yet more evidence that many features characteristic of today’s birds first evolved in their dinosaur ancestors."