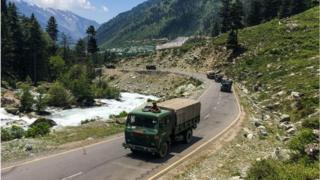 A savage brawl between Indian and Chinese forces in the Galwan river valley in Ladakh, a disputed Himalayan border region, has left at least 20 Indian soldiers dead.

The world’s two most populous nations – with two of the planet’s biggest military forces – have been at loggerheads for weeks along their long and contested high-altitude frontier.

But the crisis escalated on Tuesday when the number of Indians killed in an extraordinary confrontation soared to 20 – they had died without a single shot being fired. India said both sides suffered casualties. China is yet to confirm its number of dead or injured.

The site of the clash was on the de facto border – the Line of Actual Control or LAC – between the two countries. India and China share a border that is more than 3,440km (2,100 miles) long and have overlapping territorial claims.

The Galwan river valley, with its harsh climate and high altitude terrain, lies along the western sector of the LAC and close to Aksai Chin, a disputed area claimed by India but controlled by China.

Media reports say that troops clashed on ridges at nearly 14,000 feet high along steep terrain with some soldiers even falling into the fast flowing, 80km (50-mile) long Galwan river in sub-zero temperatures.

On Tuesday evening, the Indian army confirmed that 17 of those who died “were critically injured in the line of duty at the stand-off location and exposed to sub-zero temperatures in the high altitude terrain”.

It is thought some of the soldiers succumbed to their wounds, unable to survive the freezing temperatures overnight.

Ladakh, dotted with snow-capped peaks and arid valleys, is the highest plateau in India, located 3,000m (9,800ft) above sea level. It is a cold desert with temperatures touching -20C in winters.

Vegetation is sparse in the loose, sandy soil, except along stream beds and wetlands, on some high slopes and some irrigated land.

Military experts say that the inhospitable region has traditionally been a peaceful area of the LAC.

So what led to Tuesday’s clash – the first in the Ladakh valley since 1962 when China defeated India in their only war?

“The Galwan area has now become a hotspot because it is where the LAC is closest to the new road India has built along the most remote and vulnerable area along the LAC in Ladakh,” Ajai Shukla, an Indian military expert who served as a colonel in the army, told the BBC in May.

The road which is several hundred kilometres long, was built in 2019 and connects to a high-altitude forward air base that India has reactivated at Daulat Beg Oldi, reputed to be the world’s highest landing ground.

China is suspicious of India’s construction in the area. The road could boost Delhi’s capability to move men and materiel rapidly in case of a conflict.

In May, media reports said Chinese forces had put up tents, dug trenches and moved heavy equipment several kilometres inside what had been regarded by India as its territory.

Soldiers from the two sides earlier clashed on at least two occasions in Ladakh, with stand-offs and scuffles reported at Hot Springs; and Pangong Tso lake to the south.