The aromas you might pick up in this building, owned by Lexus, the car company, may not be that new-car smell but rather curry, roasting meat, smoked vegetables, caramel and freshly ground coffee. Food is the main purpose of this installation, which features a ground-floor cafe, a full-service restaurant and bar upstairs, and not a car in sight. It’s the third such venture for the brand, after others in Tokyo and Dubai. Union Square Hospitality Group is behind the cafe and restaurant, but the food is being devised by Gregory Marchand, a French celebrity chef who owns the Frenchie restaurants in Paris and London. He will be on hand from time to time for the next four to six months; after that, another chef-in-residence will be imported. “We want chefs who are new to New York and up-and-coming,” said Kirk Edmondson, the manager. The long-term executive chef is Nickolas Martinez, who worked with Joël Robuchon and at Foragers City Table. Kaz Fujimura is responsible for pastries, and Andrea Morris is in charge of drinks and wine. A circular bar and lounge is on one side of the second floor. The dining room, done mostly in black and white with a spacious open kitchen, seats 50. Mr. Marchand’s menu includes some of his signature dishes like baby leeks with Parmesan sabayon and smoked egg yolk, halibut grenobloise, and a toffee and banana dessert called banoffee. (Opens Thursday) 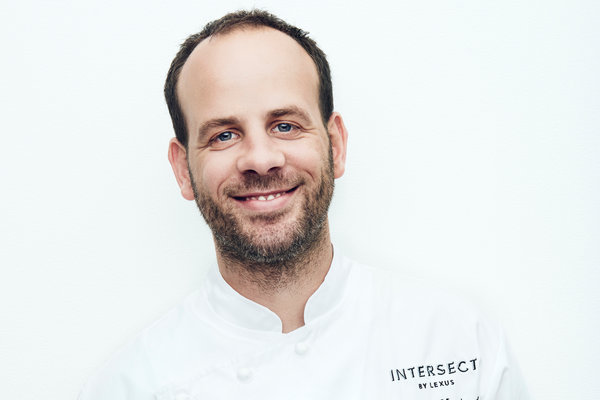 This uptown location for David Chang’s Noodle Bar has a menu of breads, noodles and rice that departs from what’s on offer in the East Village site. Riffs on the restaurant’s signature buns include a beef dip, served with broth for dunking, and slider-style shrimp buns. Ramen bowls are made with proprietary barley noodles. Tony Kim, the executive chef who joined the Momofuku organization five years ago, eventually becoming executive chef of the original Noodle Bar in 2015, has also come up with small plates like fried Japanese potato with white sauce, and bigeye tuna crudo. Larger dishes like oxtail with rice cakes, and Dover sole with fermented chile sauce are also served. The restaurant has a bar along one side of the space, a dining counter at the open kitchen on the other, and a series of booths crammed in the middle. (Thursday)

On the menu at the chef Sung Park’s new restaurant is ample evidence of his Korean background. Consider Asian pear in beef tartare, gnocchi made with rice in a béchamel sauce with fried pork-rind crumbs, and gochujang mayonnaise on a chicken-waffle sandwich. Kimchi in little tins is served with vegetable bibimbap. Mr. Park, who came to the United States when he was 25, describes his food as a blend of Korean flavors and French techniques. Southern influences are also in play at this 70-seat gastro-pub-style restaurant, which he is opening in the former Mas (farmhouse) space with a team of partners, including his chef de cuisine, Cesar Jimenez. Noel Shu, the managing partner, designed the space, with charcoal wood siding, gray leather banquettes and columns flecked with silver and gold. (Friday)

Before even getting to the food, there’s the look of this new Chinese restaurant on the Upper West Side: subdued elegance in a muted color scheme, marble tabletops and a mural of mountains and towers done by the artist Qiu Anxiong in the style of traditional Chinese watercolors. One owner, Haocheng Sun, is an art collector. Though the menu includes some popular items, like soup dumplings, pot stickers and dan dan noodles, it also offers a feast for those with uninhibited tastes for robust seasoning and offal. There’s spicy duck tongue, chicken feet with two spices, Xiang-style stinky tofu and deep-fried pork intestine. More conventional are cumin-flavor lamb in a dry wok and sautéed spicy littleneck clams. Pan-fried shrimp in garlic sauce are prepared tableside. The chef, Kaiyuan Li, is a 20-year veteran of the New York restaurant scene who touches on several regions but focuses on Hunan. He cooked at Hunan Manor in Midtown, which Ligaya Mishan praised in a Hungry City review.

An all-day menu with an emphasis on vegetables and boldly seasoned global fare, like roasted squash with smoked paprika, and cumin- and garlic-roasted carrots, distinguishes this Upper West Side addition. It’s a partnership between Tea Pollock, a geneticist with a passion for food who lives in the neighborhood, and the chef, Ben Vaschetti, another local. (Monday)

This restaurant (the name says it all) tucked into a new hotel tower is managed by Yves Jadot and Alberto Benenati, who have a diverse portfolio of places around Manhattan. For now, they’re serving only breakfast; lunch and dinner are coming soon. Next month, Dear Irving on Hudson, a bar and lounge, will open on the hotel rooftop.

Red-sauce Italian in a setting bedecked with vintage items is the work of Will Durollari, a chef, and his sons, Arben and Kuj Durollari, who work in fashion. The executive chef, Andrea Cinus Napolitano, is interpreting the Durollaris’ family recipes, including braised meatballs and a banana cake.

Mediterranean fare all day, with an emphasis on North African and Israeli cooking, is what you’ll find at this new spot from the chef and owner Shimon Maman and his partners. Mr. Maman was an owner of the 12 Chairs Cafes. (Thursday)

The cocktail lounge and nightclub in the water tower structure atop the Williamsburg Hotel is about to open. (Friday)

For several years, a group of sushi aficionados has been trying to create a high-end destination in New York with Tadashi Yoshida — a 49-year-old award-winning chef with 30 years of experience and a restaurant, Sushi No Yoshino, in Nagoya, Japan — in the kitchen. They are close to accomplishing their goal, and the restaurant is now to open in the spring. The menu will be a $300 sushi omakase served at a 12-seat counter made of Japanese hinoki wood. Mr. Yoshida is not merely opening a branch of his restaurant, as many Japan-based restaurateurs have done, but is also moving here after closing his restaurant in Japan next month.

The chef, who worked for many years for Jean-Georges Vongerichten and went on to open Loring Place in Greenwich Village, will expand his portfolio next spring with a new place in Queens. As yet unnamed, it will be the restaurant anchor for a new commercial and retail development, the JACX, and will share the ground floor with a food hall and market.

Chefs on the Move

Mr. Bono, a native of Sicily who worked with Gualtiero Marchesi in Italy, is the new executive chef at Il Valentino Osteria on the Upper East Side.

Mr. Shaner, a chef who worked at Gotham Bar and Grill, Union Square Cafe and Freek’s Mill, has become the executive chef at the Wild Son in the meatpacking district.